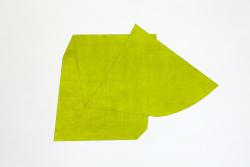 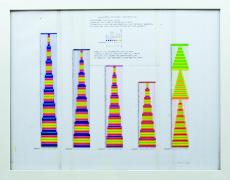 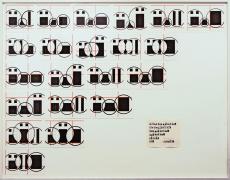 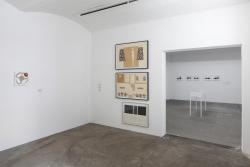 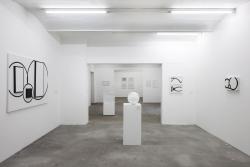 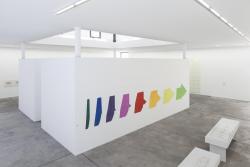 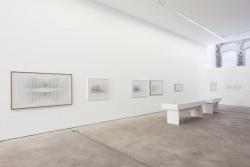 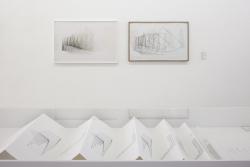 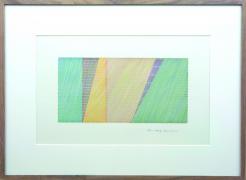 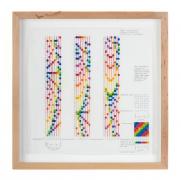 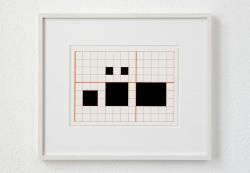 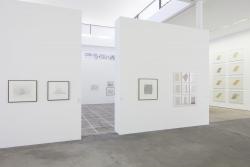 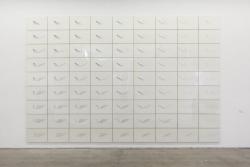 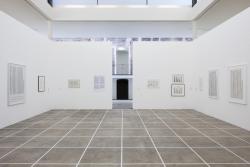 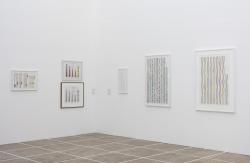 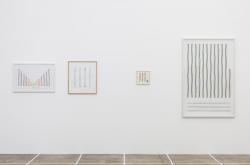 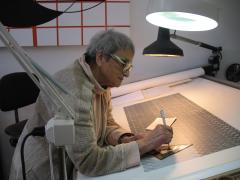 Featuring important works from all phases of the artist’s career, the survey provides an introduction to her œuvre and insight into key series such as the LANGUAGE SERIES, SONAKINATOGRAPHY, RHYTHMS, and STRUCTURES. In addition, a selection of construction drawings and documentary material is made public for the first time, through close cooperation with the trustees of the artist’s estate in Los Angeles.

In the late 1960s, Channa Horwitz developed an artistic language that attained freedom through deliberate confinement to a few simple rules. Since then, each one of her works has been based on the numbers one through eight, additionally often with a specific color code assigned to each number. Orienting herself to the format of standard American graph paper, the artist could depict time with the aid of graphic units, and movement in time as the corresponding color schemata. In this way, she designed structures that translate spatial- temporal relations into drawings, paintings, and multimedia sculptures.

The exhibition at KW retraces the development that led Channa Horwitz from figurative painting to conceptual abstraction. On the one hand, the increasing abstraction of figural motifs led her to the basic forms of the circle, the square and rectangle, from which the LANGUAGE SERIES (1964–2011) emerged, among others. On the other hand, she developed a system of depicting movement – both of bodies and of objects in space, and of the voice and sound over time – as notations. These early experiments with moving objects led to the series SONAKINATOGRAPHY (1968–2012), which she continued until her death in 2013, when it comprised of twenty-three different compositions in manifold variations.

“Sonakinatography” was her new term, combining the Greek words for “sound”, “movement”, and “writing/recording”. Each drawing in the series could as well be presented as a performance or a concert, or transformed into a spatial installation. For this exhibition, a variation of each completed composition from this work complex – the artist’s most well- known to date – are brought together for the first time, and their presentation space forms the core of the exhibition. Since the mid-1970s, Horwitz started to explore new patterns, shapes, and movements which led to series such as RHYTHMS and STRUCTURES,and incorporated up to four parallel levels within one drawing.

When Channa Horwitz died in 2013 at the age of eighty, her international career had just recently begun. From the mid-sixties until the 2000’s, the artist lived and worked in seclusion  and her work was rarely exhibited.