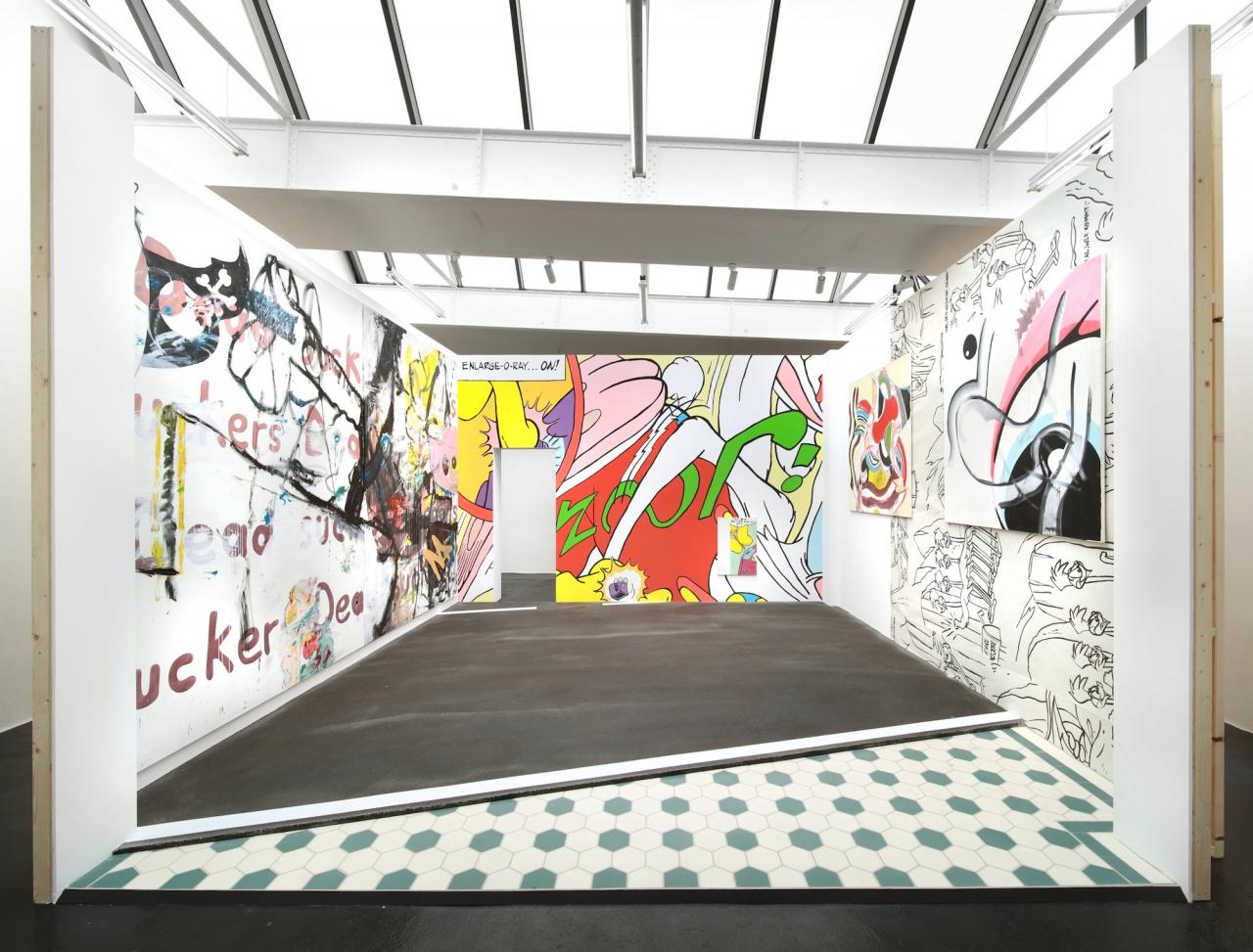 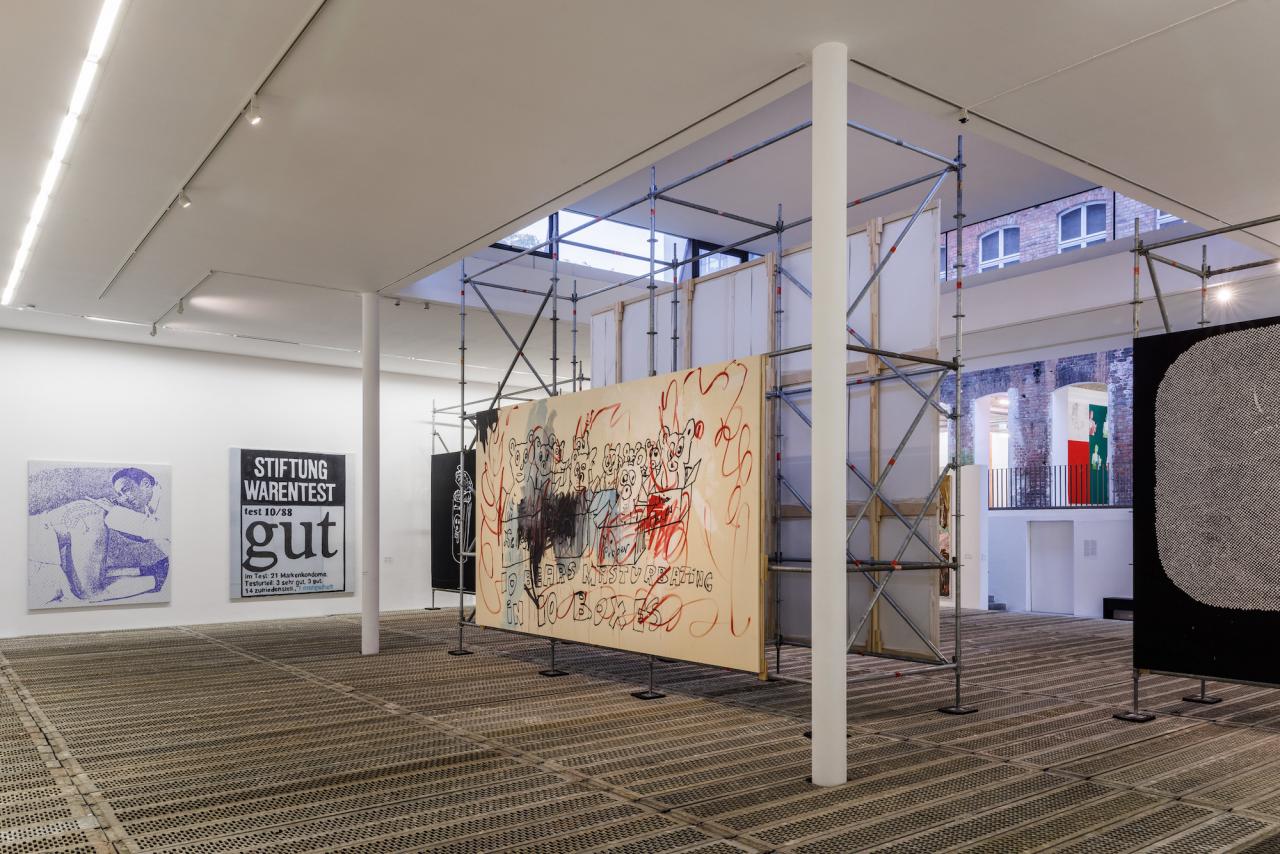 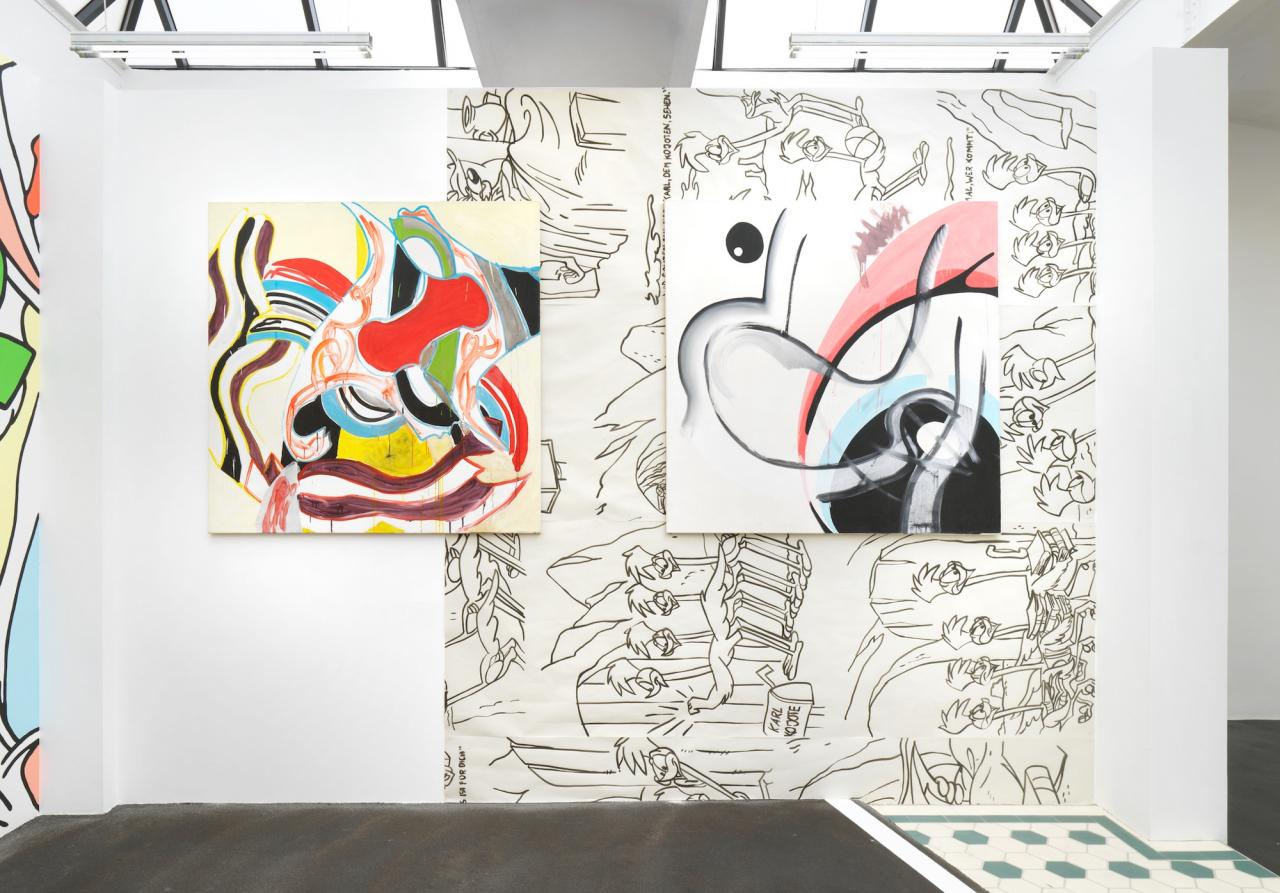 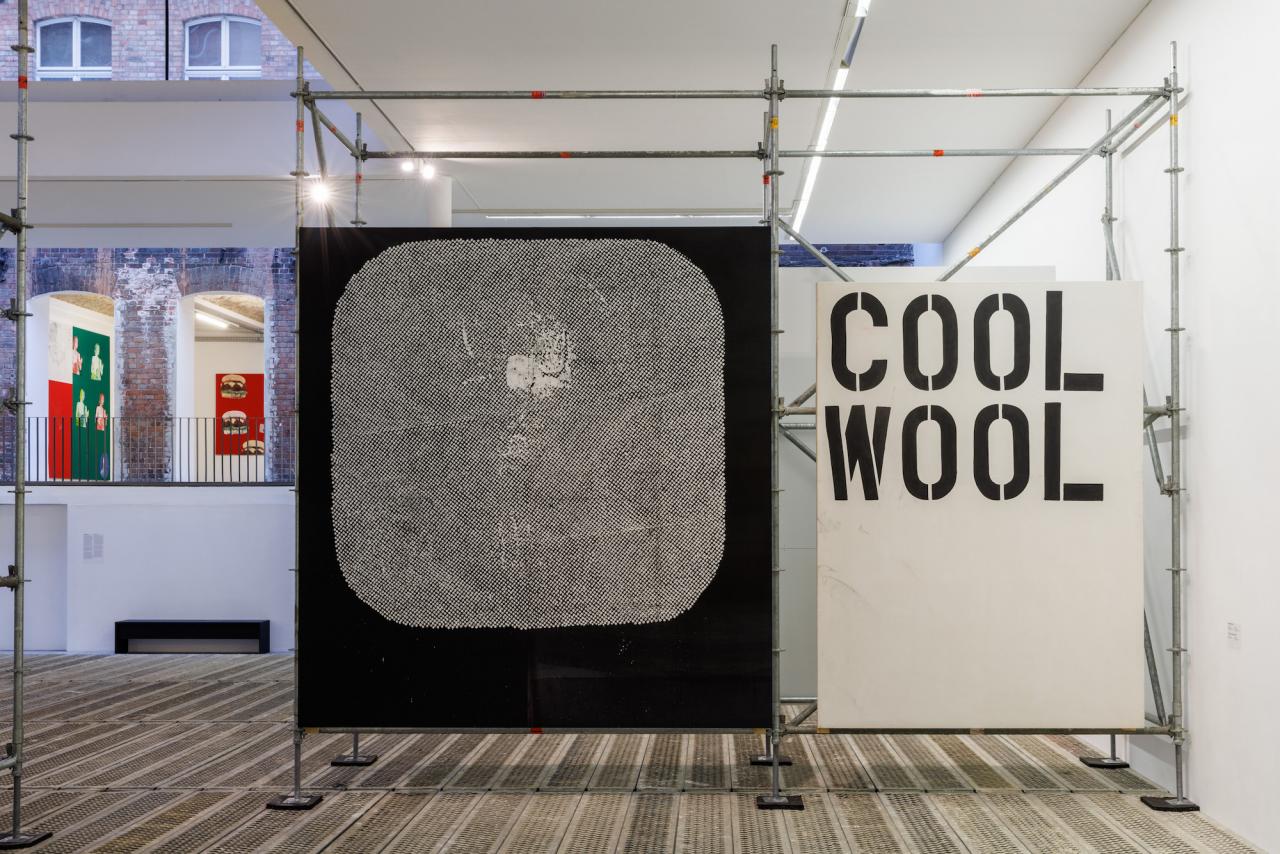 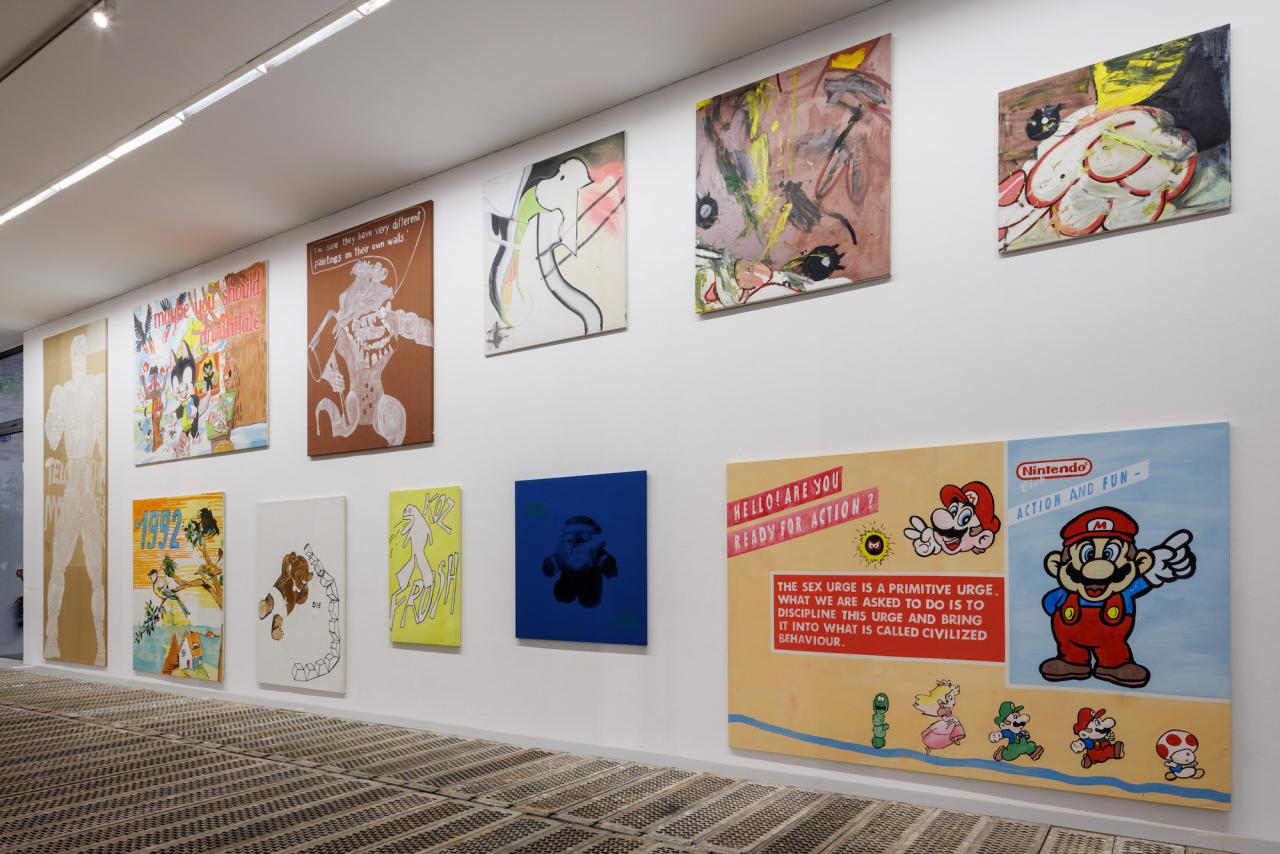 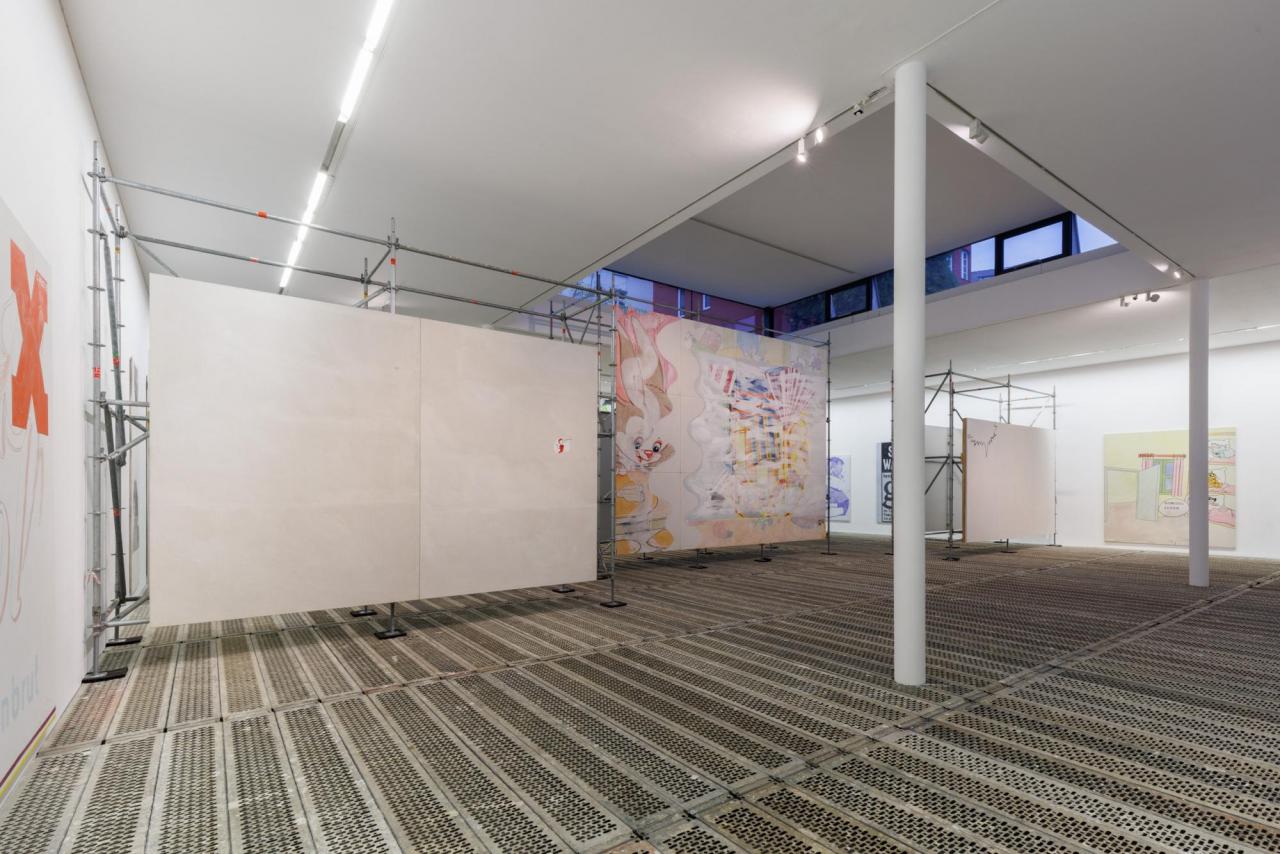 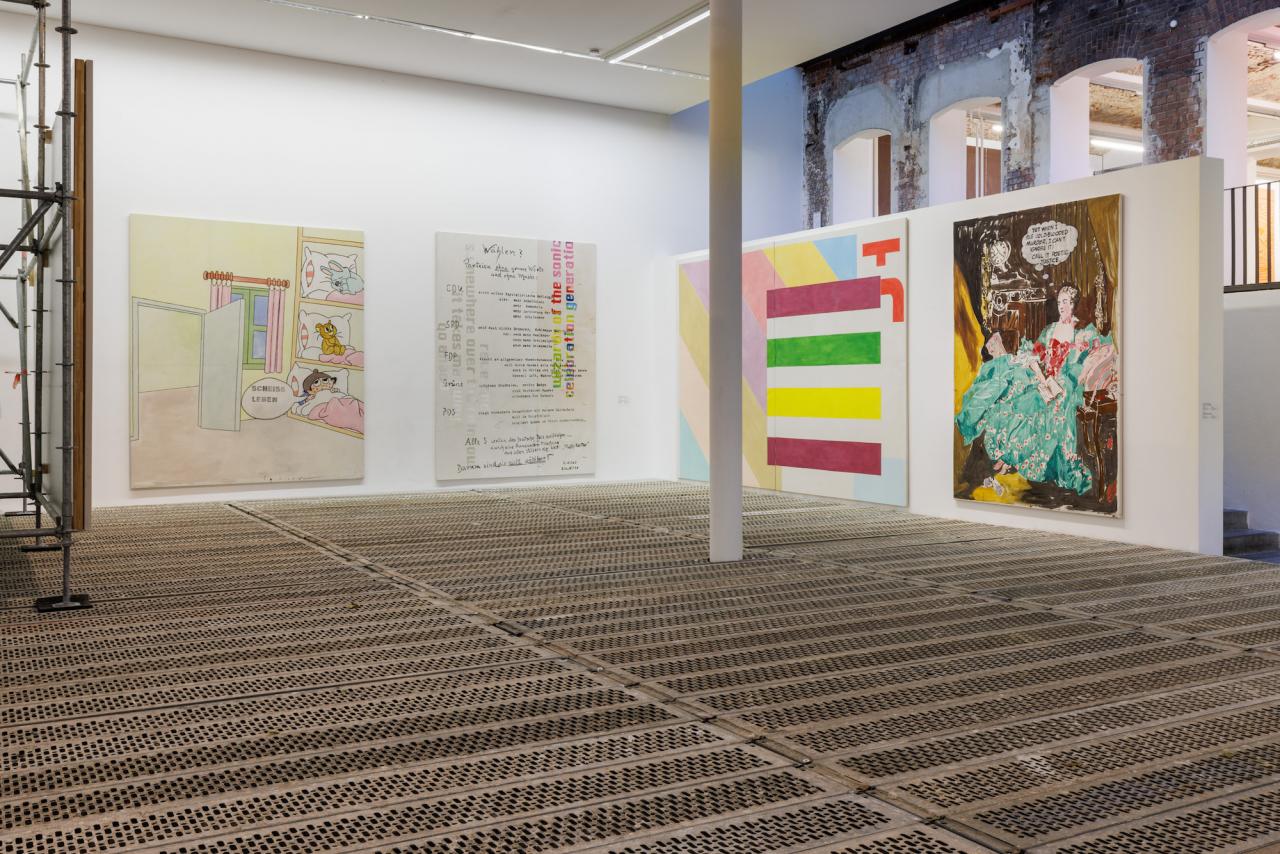 Two decades after the painter’s plane-crash death, the reconstruction of a pair of 1990s-era exhibitions at the KW and neugerriemschneider prompts Colin Lang to ask: was Michel Majerus the 20th century’s last conceptualist, or our own millennium’s first art-world troll?

How do you start to paint after Conceptualism and its mistrust of the art object as a vehicle of aesthetic experience? And not just of aesthetic experience, but also as a commodity form? If these were the motivating questions for an artist’s practice in the late 1980s, when the most significant cultural exports were video games and Japanese cartoons, you probably arrived late to the party. Michel Majerus (1967–2002) was, aesthetically and formally, a latecomer, but he acknowledged that fact – and celebrated it, even – long before his untimely death. The current wave of exhibitions in Germany and elsewhere marking the twentieth anniversary of his tragic demise are likewise figuring things out well after the fact (i.e., late).

Majerus cut his teeth in the wake of Conceptual art’s institutionalization, arriving in Stuttgart to study, first with the Informel painter K.R.H. Sonderborg, then with Joseph Kosuth, the much-maligned author of conceptualism’s watery 1969 broadsheet, “Art After Philosophy.” The late 80s were certainly a strange moment to ingest conceptualism, and the temporal discontinuity between Majerus’s education and what the art world was high on at the time would become a badge of honor for the artist, rather than a hinderance. Seen today, his work is nothing if not a bastion for amnesiacs bent on repurposing earlier artistic gestures at the risk of their de-contextualization. In this, Majerus was timely indeed. The question left unanswered is whether, seen from the present, Majerus was more symptomatic of his pre-internet age, or somehow prescient of what was to come.

Two exhibitions in Berlin offer what Majerus himself was unwilling to provide: a focused look at the origins of a brief but incredibly prolific output. At the KW Institute for Contemporary Art, “Michel Majerus: Early Works” begins as the Luxembourgish painter stepped out of the shadow of his mentors, deploys an almost fundamentalist re-creation strategy that reinstalls the floor of the artist’s 1996 exhibition at the Kunsthalle Basel and mounts his paintings on scaffolding. The maneuver is shared in “Michel Majerus: gemälde [paintings], 1994” at neugerriemschneider in Berlin – the city where the artist primarily lived and worked – which re-creates a 1994 exhibition that was Majerus’s first with the gallery (as well as one of the gallery’s first overall). Visitors to either presentation will no doubt wonder why someone who rehashed former tricks and delighted in ahistoricity has suddenly become an historical figure.

The relational nature of Majerus’s installations seems to require nothing less than documentary obedience. But is this move not also part and parcel of the archival style more generally, tied to a fetishization of late artists? It must be noted that servicing the original conditions of Marjerus’s work has gone hand in hand with increasing market demand, as auction prices generally skyrocket after an early passing; Majerus is exemplary in this regard. A third, related phenomenon is the historicity of a unique constellation of events, as Majerus stepped out into his career trajectory just as the Berlin Wall fell and Francis Fukuyama erroneously declared “the end of history.”

At neugerriemschneider, the gallery has re-built the original exhibition, which took place at a different location in the German capital, part for part within the confines of its current home near the KW. In 1994, Majerus removed sections of the street at the gallery’s former outpost on Goethestraße in the city’s Charlottenburg district and installed them as the literal ground for his installation. The move, like so many in the Majerus toolkit, was a light rehashing of something done long before, as in Michael Asher’s project at the Museum of Contemporary Art Chicago in 1979, in which sections of the external facade were removed and relocated to the interior walls of the museum. Farce is the best way to characterize Majerus’s move, and the hoodwinking is done with colorful and playful painting that is not as objectionable or vulgar as he might have liked it to be, as with 10 bears masturbating in 10 boxes (1992), which infantilizes Cy Twombly-like gestures and recodes them inside of Majerus’s imaginary playroom. Mummifying the 1994 exhibition is proof that any gesture, regardless of context or creator, is bound for the dustbin of history, maybe even before it makes its first appearance. The slapdash handling of paint and the cartoonish palette of cadmium reds and neon yellows hint at Majerus’s awareness of this gaping maw of cultural obsolescence, devouring all attempts at subversion and recasting them as marketing strategies or the stuff of legends. Majerus famously quipped, “What looks good today might not look good tomorrow.” The feeling emerges that perhaps Majerus’s maddening mode of production was a way of trying to outrun this system, and that all modes of visualization were fair game in the process. Whether other Europeans, Martin Kippenberger chief among them, suffered a similar fate is proven by the cultural specificity of taste – mostly of the bad variety, in Majerus’s case – which prohibits some viewers from feeling invited to crash the bourgeois party.

At the KW, the development of what, for lack of a better term, could be called Majerus’s “style” is on display, with loads of Nintendo characters, references to The Simpsons (1989–), and direct interpolations into the history of then-contemporary painters, from Frank Stella to Christopher Wool. The latter serves as the subject of one painting in particular, exemplary of Majerus’s relationship to culture more generally, where, in the block letters characteristic of Wool’s work, he wrote “Cool Wool.” The joke has its limitations, but it reveals an aspect of Majerus’s work that is mis- or underrepresented in the existing literature and the 2022 hagiographic re-creations of his exhibitions: that for all of his lateness, Majerus was perhaps the first art-world troll. And lord knows, trolling is both ubiquitous and radically democratic: anyone can do it, and the content is completely exchangeable, taken from cultural heights both high and low.

Seen retrospectively, Majerus’s gifts come into sharper focus, turning the work from the art of appropriation to the smug modus operandi of trolling. The wish to see what Majerus would have become is the strongest emotion that the two shows elicit: what would the artist have done with the purposely ugly aesthetic of the NFT, or the online proliferation of the self that is disseminated as widely and quickly as any Mario character? In Web3, we might all be Majeruses.

COLIN LANG is a critic based in Berlin.