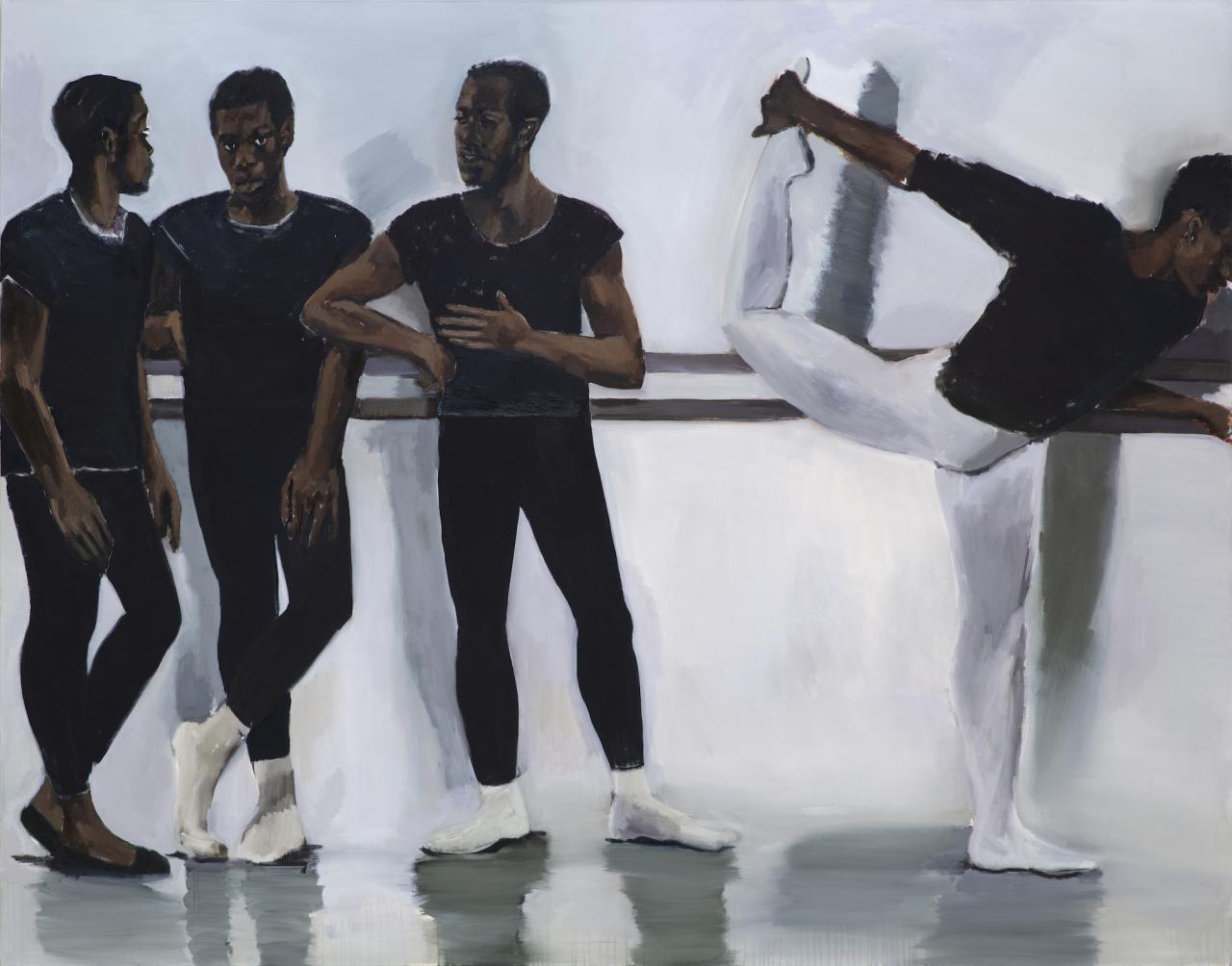 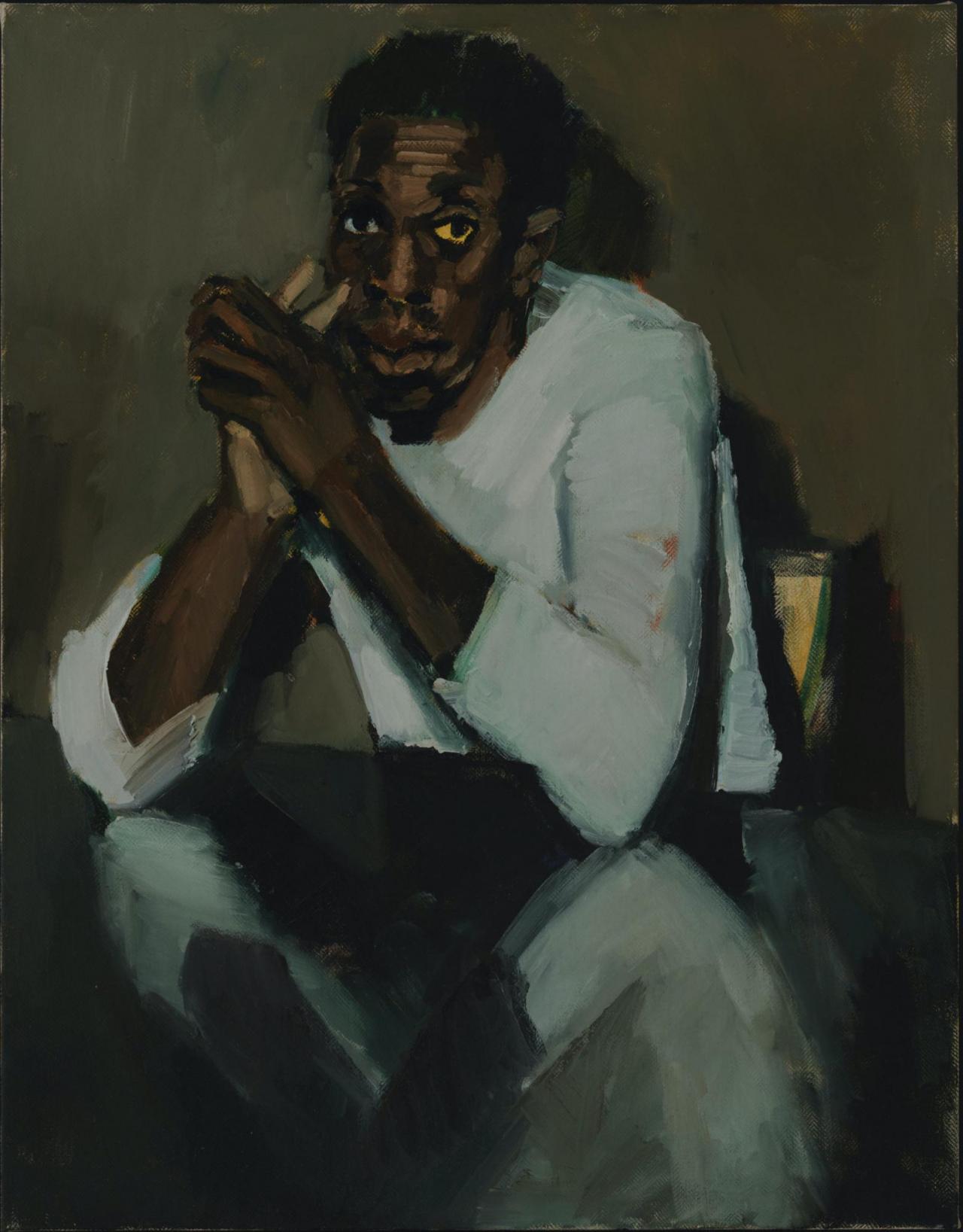 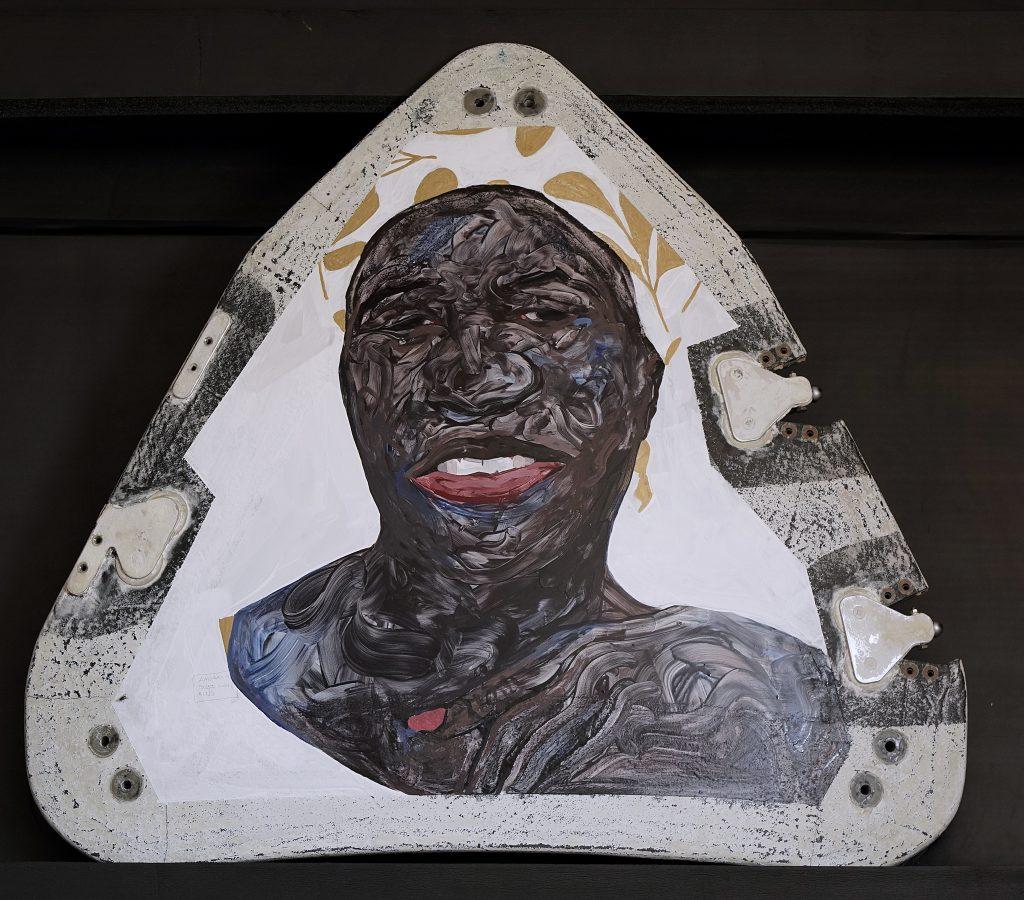 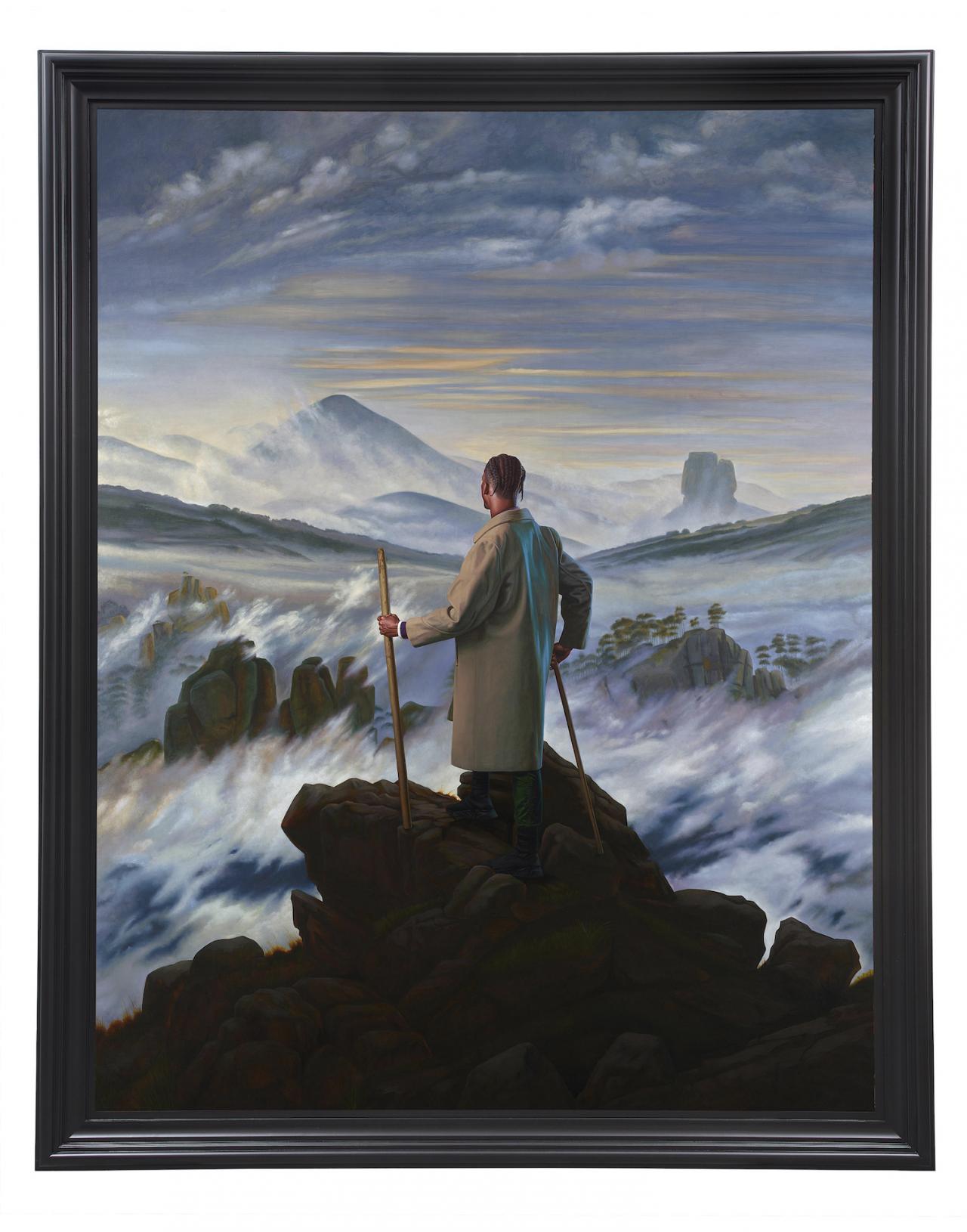 A wave of figurative paintings, by black painters and focused on black subjects, has spawned a ubiquitous new style – but has market pressure pushed artists’ radical intentions into something more palliative? Elisha Tawe examines how, upon a closer look (and listen), certain artists like Lynette Yiadom-Boakye deftly resist the compulsion to make black life so easily consumable.

The singularity is real. It rests at the tip of my thumb. In every upward flick. In the blue light swimming through the air and into my retina. Like most of Generation Z, the internet is my sedative of choice. It’s like a warm weighted blanket you can wrap around your brain and make all your troubles melt away. Comfortably enclosed in your algorithmically-developed bubble, you can flip the switch in the back of your mind and cruise through this constructed reality on autopilot. But what can sometimes feel like a helping hand may in fact veil something pernicious.

Last fall, in the midst of England’s latest lockdown, a time of social turmoil, conspiracy theories, and illegal raves on Downing Street, a friend suggested I watch Adam Curtis’s found-footage documentary HyperNormalisation (2016). Over the course of its nearly three-hour runtime, Curtis constructs the internet as a sort of pacifier actively relieving and distracting us from the complexities of the “real” world. The film traverses back to an early manifesto by poet and internet philosopher John Perry Barlow, “A Declaration of the Independence of Cyberspace” (1996). Barlow’s treatise dreams of a utopian plane, free from the tyrannies and bad actors of offline society. Looking at the landscape of the present-day ‘net, it’s clear that Perry’s hopes did not come to fruition. Masked as investors and innovators, corporations have cemented their place in cyberspace, turning it into a capital-driven marketplace, a virtual bubble that gently cradles and rocks us into a state of passive delusion. What, then, might push us out of our complicity?

Flashback: it’s early 2021 and I’m standing in Tate Britain looking up at a painting by British-Ghanaian artist Lynette Yiadom-Boakye, who famously invents all the characters in her paintings rather than representing figures from “real life”, often placing them in historically-ambiguous attire and spaces. In this particular work, Few Reasons Left to Like You (2020), a young black man sits at a table, pensively staring out at me, as if to question where I have been. The entire hall is filled with made-up faces, just like this one, carrying out everyday tasks. Young girls playing at the beach. Two boys getting dressed in a dimly-lit room. What looks like a mother conversing with her daughter. There's a drowsiness to the majority of the figures; a disdain or disinterest, an aura of sedation. Their placidity bears a facile similarity to the affect of digital life. Maybe, though, their status is more nuanced, akin to how black feminist theorist Tina Campt understands “stasis”: the tension produced by holding a complex set of forces in suspension. An illusion of quiet. The question, “what music do you hear in these paintings?”, is posed to exhibition-goers in the Tate’s framing text, but the room is silent. So what are we listening to?

Campt coined the practice of “listening to images'' in her 2017 book of the same title. In her work, she prompts viewers to interact with images on a “sonic” level – a poignant analogy, as no work from black artists has permeated the white psyche quite like black music – to probe beyond immediate aesthetic qualities. What do images’ less-readily perceptible wavelengths say about the time they were produced, the people they represent, and the circumstances that dictated their production? The symbolic “sonic” frequencies radiating from Yiadom-Boakye's paintings confront the traditional Western art canon with vastly different assumptions than those historically held. They position black people not only as their central subjects – a radical act in itself – but furthermore as humans who, like their white counterparts, do not have to display any form of exceptionalism to be worthy of space on gallery walls. Though Yiadom-Boakye maintains that her process is rooted in the act of painting more than any political agenda, her works comprehend the absurdity of Black life in the West on a spiritual level and do not shy away from highlighting it. In her shows, white exhibition-goers are pushed into encounters in which they must confront their carefully supressed terror towards blackness and find common ground on the basis of shared humanity.

Yiadom-Boakye, of course, is not the only black artist to assume this approach to figurative painting. The Ghanatta College of Art and Design in Accra-Ghana produced a cadre of painters working in a similar vein. Over the last year, these sorts of paintings have become the main style I encounter during my nightly doomscrolls – bolstered by curatorial fervour from institutions grasping for relevance in a post-BLM market. The aerospace company Blue Origin (owned by Jeff Bezos, Corporate America’s favourite adoptive PoC, per the notorious Twitter meme) commissioned a triptych painted by Ghanatta alum Amoako Boafo to launch into space. A few months earlier, Boafo’s apprentice and fellow Ghanatta alum Kwesi Botchway debuted in London with a solo show down the road from The Royal Albert Hall at Gallery 1957. As I write this in early 2022, Kehinde Wiley, an American painter born to a Nigerian father and African-American mother, is currently being exhibited at the National Gallery in London; Cameroonian painter Ludovic Nkoth just released a collaboration with streetwear staple-brand Kith; and the aforementioned Yiadom-Boakye show at Tate Britain is set to return in the fall after being cut short by the lockdown.

Cyberspace, once a space of open possibility, was enclosed by market pressure, crystallising into something palliative and consumable. Is black figuration doomed to a similar fate?

As members of polite society, it’s fair to assume we’re all in favour of these progressive acts and admit to them having a net positive effect on race relations both within and outside the art world. However, following the myriad of accounts of racism within corporations and art spaces that publicly position themselves as champions of inclusion and diversity – see The Barbican Stories for just one example of how ostensibly-liberal arts orgs are still often wracked with discrimination – I have become wary of white spaces that are suddenly overly eager to celebrate certain styles of black work. We live in a time of spectacle, a time in which smooth veneers of morality hold immense cultural cache – in which paintings like these serve as conspicuous symbols for institutions to point towards while they implement few or no changes to the material ways in which they internally handle race relations.

Cyberspace, once a space of open possibility, was enclosed by market pressure, crystallising into something palliative and consumable. Is black figuration doomed to a similar fate? This style, which could be described as a new “black quotidian”, may have carved out an almost certain lane for black painters to garner attention, particularly as the Western art world competes for woke points. However, what once stood out as the asset of such an aesthetic – its ability to send a message in simple, direct and palatable ways – also marked it as rife for exploitation. Its popularity with curators and tech billionaires alike has resulted in a frenzy of watered down, mass produced, direct-to-consumer reimaginations.

Like the rest of the internet, the allure of the majority of these contemporary “black quotidian” paintings that continually crop up in my feed rests in their ability to sedate. In the best of cases – such as Yiadom-Boakye’s work – this apparent quiet is just an illusion of stasis, a delicate tension holding nuanced truths. But “listening” closely to the newer iterations of the style springing up to eagerly meet curatorial demand, it’s evident that something has been lost along the way. The market-driven pressure for black painters to adopt this conveniently legible style has led to the profusion of vague figurative paintings just radical enough to suggest a progressive tinge, but still conventional enough in aesthetic form not to threaten the dominant culture of white supremacy. But can the onus really fall on the artists if the global art world has heavily favoured a style that often resembles 19th-century Impressionism, a style they are accustomed to? If a banal figurative painting is what sells, can we blame artists, especially ones coming from cultural backgrounds that have historically been pillaged for inspiration and then cast aside, for falling in line and producing the kind of work that is provably validated? I don’t think we should, but we should definitely push for more rigour; more challenge.

What separates Yiadom-Boakye’s paintings from those opportunistically borrowing her aesthetic is her willingness to engage with the exclusion of black bodies as central figures from Western art history in subtle and subversive ways. Her decision to place black subjects in spaces and attires difficult to pin down to particular historical periods allows them to flow through the canon, simultaneously existing everywhere and nowhere, a precise and pointed attack on their exclusion. In her words, her work is not so much about inserting Black people into the canon, but rather, “saying that we’ve always been here”. Reject the blackpill. Manoeuvres like these, with frequencies resonating in poignant yet much quieter registers, point towards the possibility of intellectual play, provoking actual, ontological shifts in the status of blackness within the art world. Adhering to the popular narrative sedates the mind, but radical change demands that we break from the mediated passivity of a hyperlinked time.

ELISHA TAWE is an audiovisual artist, co-founder of the creative duo GRAY417C, and the Style and Culture editor at A2.O Magazine. He is currently based in London.