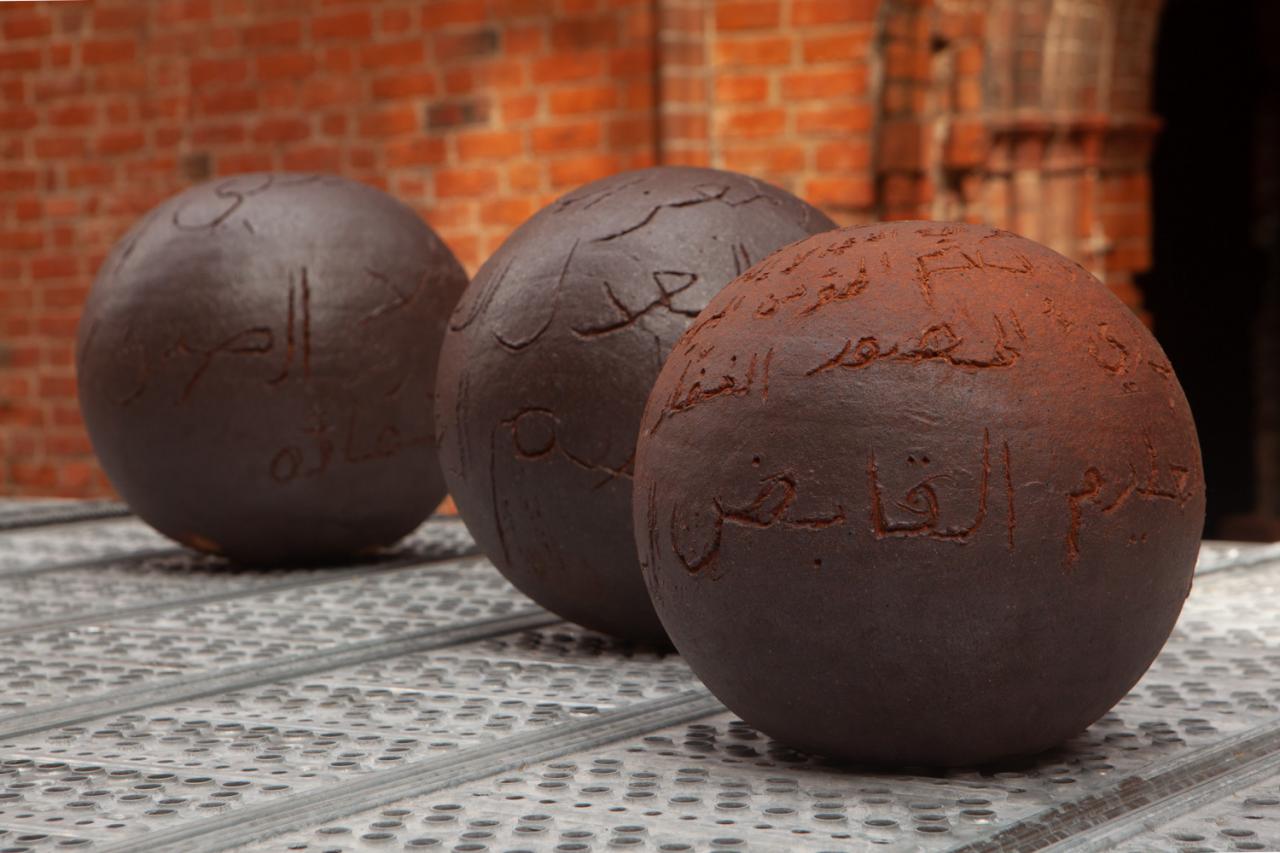 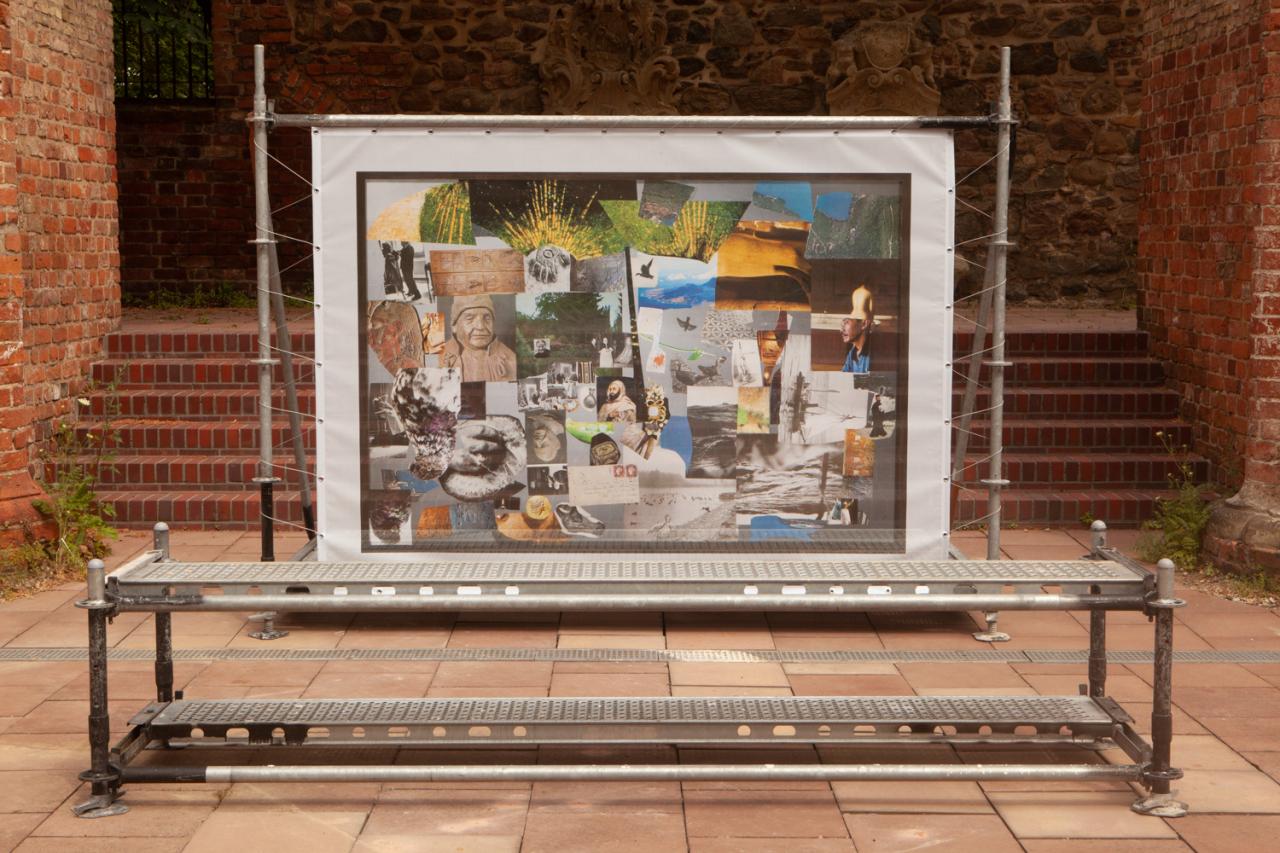 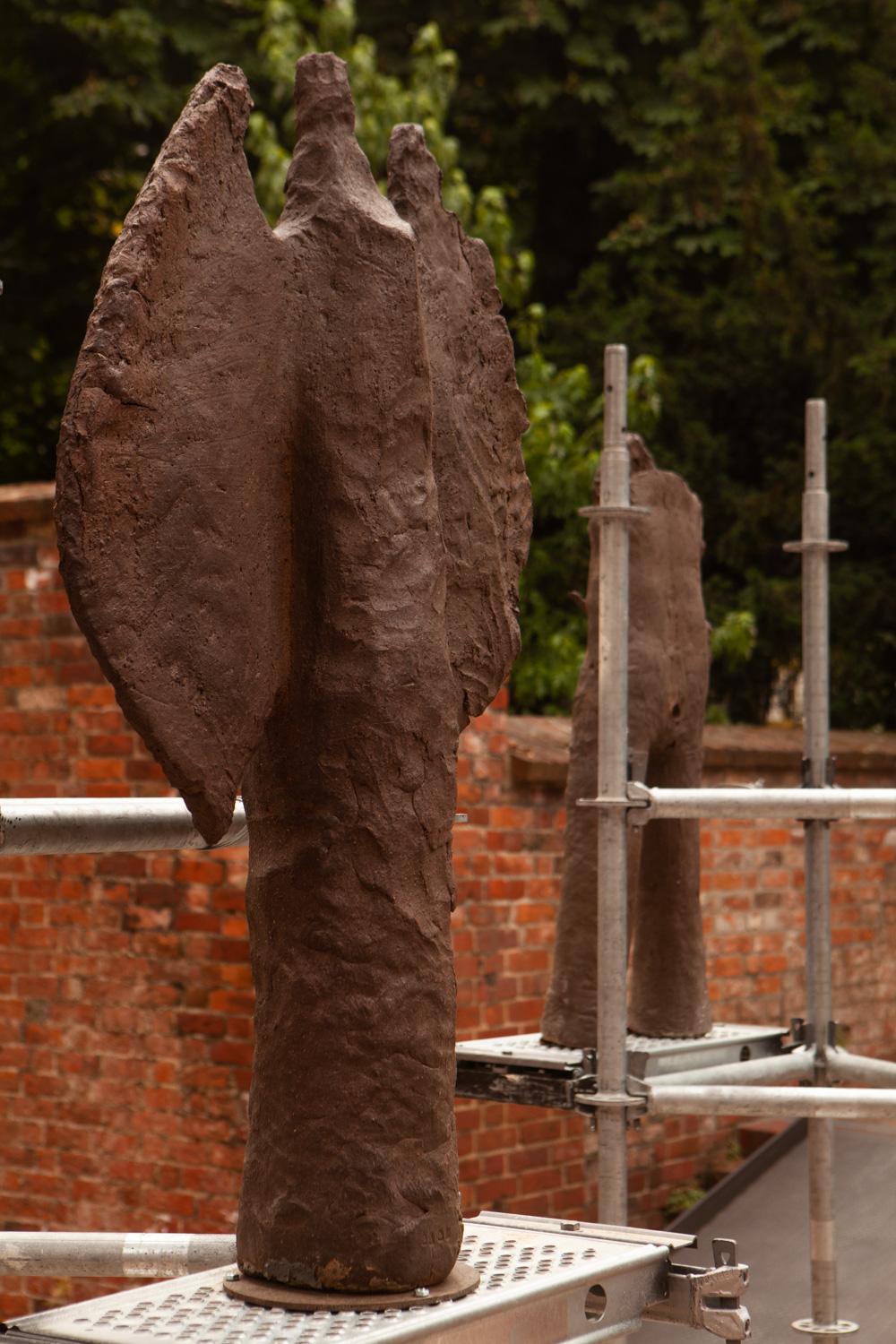 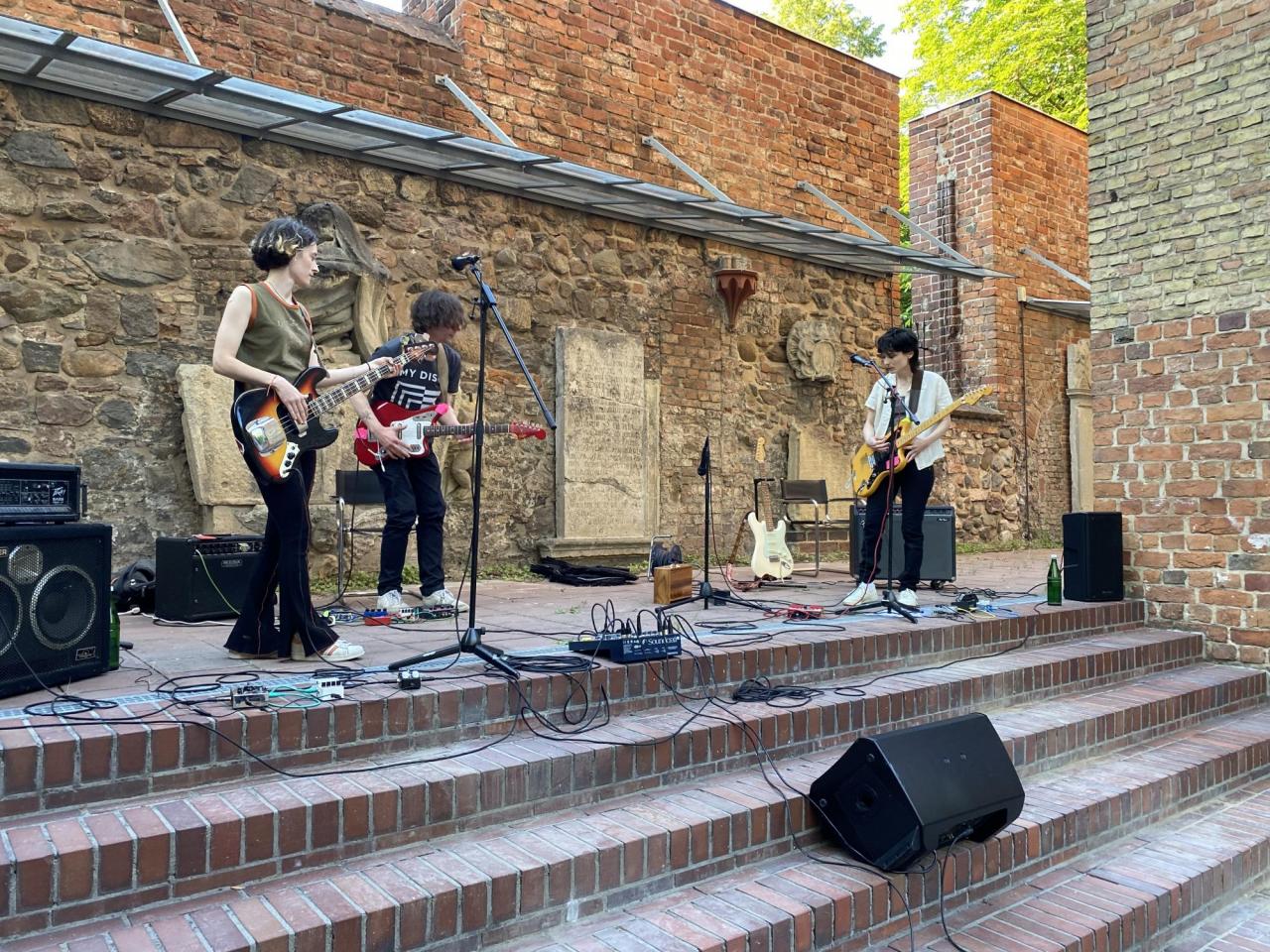 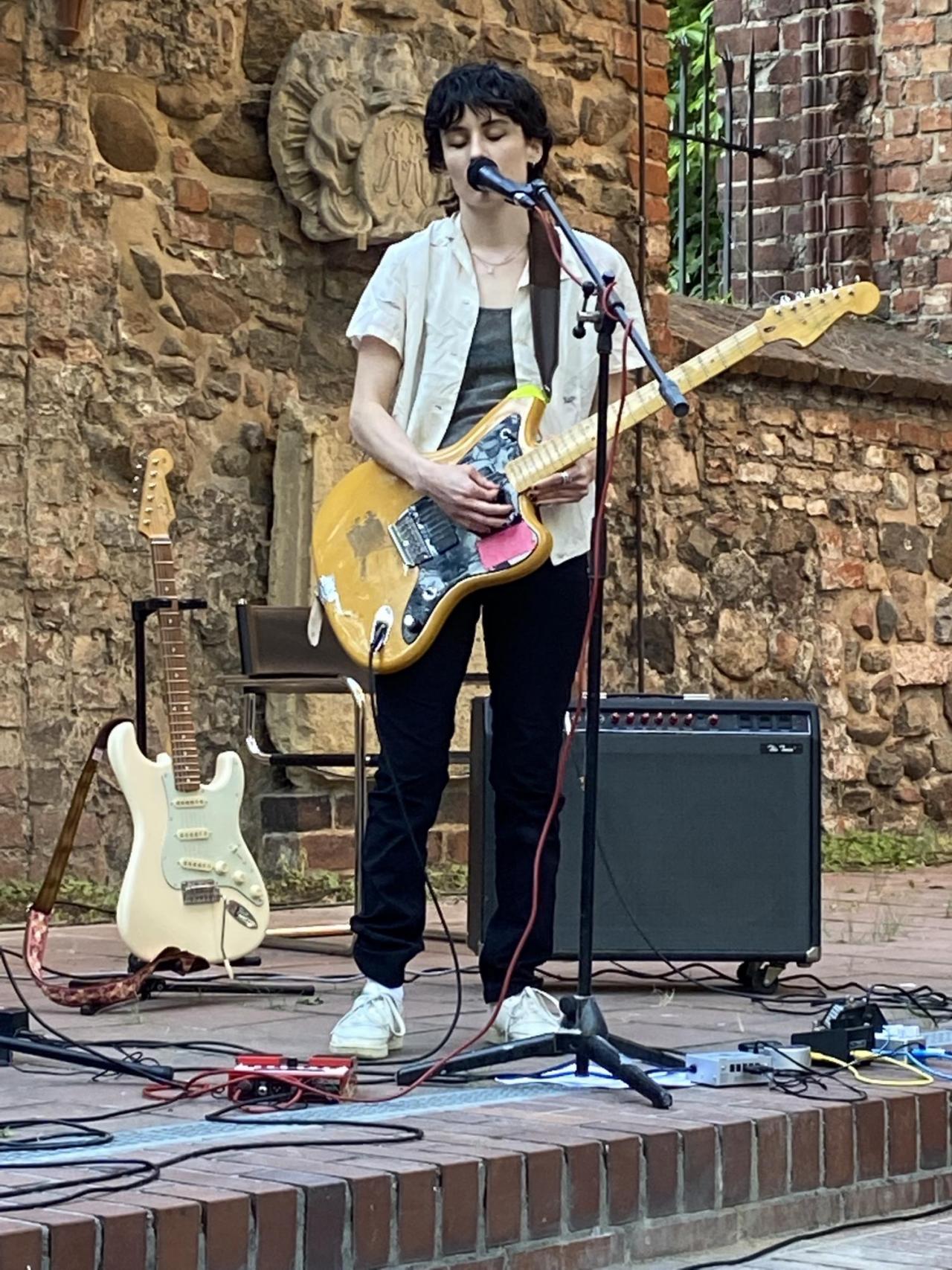 It was a meeting of the ages at Berlin’s Klosterruine, a small bombed-out chapel near Alexanderplatz, whose shards and fragments read like a relic of the Romantic era, capacious and filled with light. This memento mori of the age of German history is beset by the television tower of the networked era on one side, and the newly rebuilt Schloss on the other (though recently completed, very much a ruin in its own right). Inside the once-religious space were works by the Parisian-based myth maker, Simone Fattal, now in her early 90s. Some of her traditionally muted clay sculptures were erected on scaffolding, towering above the small crowd assembled to hear a concert by Early Grey. In another section of the ruin, perfect spheres inscribed with Arabic were lain on a woven matrix of steel, like a suspended cosmos of planets paused in mid-orbit. The celestial and its earthly double formed a fitting backdrop for the show that was to take place under a gothic arch in the former Franciscan cloister, which framed its performers like a shadow of what had been together with the promise of what was still to come.

Early Grey consists of artist Leda Bourgogne along with two other artist/musicians, Rebecca Prechter and Stefan Müller. No art rock here, though, as the first song, a cover of The Kinks’ “I Go to Sleep” plunged the audience under a wave of harmonically-attuned voices on top of wrangling guitar and the meditative pace of Bourgogne’s Shruti box. Water into the elements of air and earth thus struck a new spiritual chord in the chapel, more universal than sectarian, all guided along by Fattal’s angels. Early Grey’s ode to loneliness –  dreaming of falling asleep with an absent object of love – was followed by longer ragas, droning melodies that carried Bourgogne’s texts to those penitent observers, whose clothes were fluttering in the pagan breezes of feedback and the gentle summer evening around them.

When Prechter and Bourgogne sing together it is the kind of sound that cuts through the intellect and pierces something unknown or neglected. If that sounds like the objective of a sermon, well, the church be damned. There was enough light, air, and song to carry you just about anywhere, though I couldn’t help noticing that the preacher’s monotone was made over into a siren’s song, calling us not to join but to plunge into the water’s deepest regions with them.

Next to Fattal’s swiftly immovable celestial bodies, adorned with words and writing, the effects managed to strike both surface and depth, sculpting a spatial terrain that even the angels might have nodded their heads to. With the sun beginning its near-endless setting in Berlin, where dusk goes on like a season, being outside, and yet not really outside, was familiar territory to us all. What has been missing is the immediacy of performance, of course, a live act that begins and ends, marking time in the otherwise eternal present.

Read Simone Fattal in conversation with Sophia Al-Maria in Spike #68. 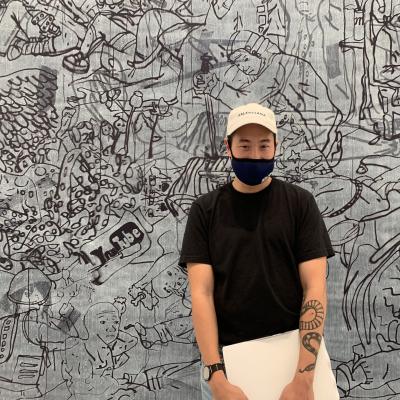