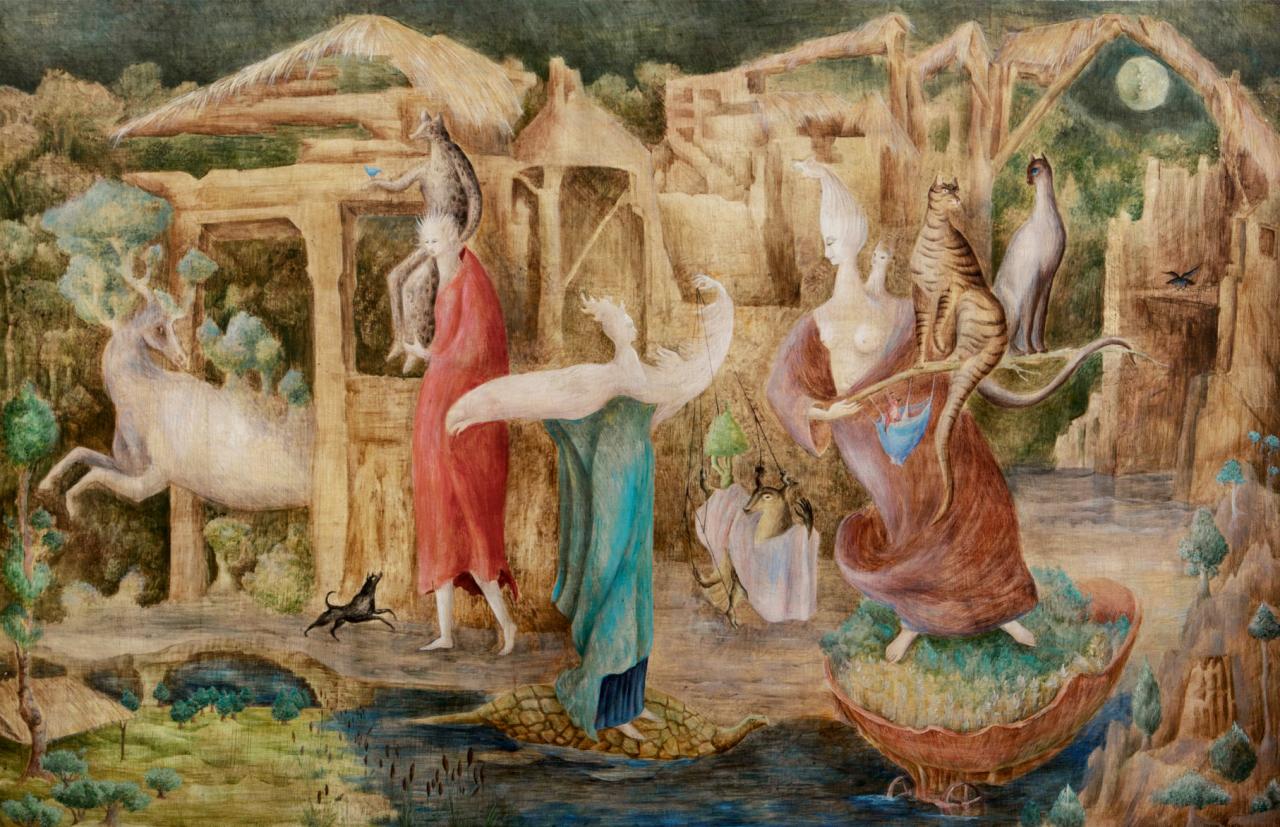 For his first column of 2022, Dean Kissick comes to us with a parable (or a prophecy?).

You don’t understand what I saw in the smoke!

There was an old man, a wise old man from the university but he might have lost his mind, who had stared into the smoke of the fire upstairs in the palace, in Sacred City, had watched it for years, more than a decade, each evening and night, waiting for someone. He had watched it so long and so dutifully until finally, eventually, one night at last a being had emerged there, a small beautiful being had appeared: a small man, tiny man. A golden child with a soft furry cloak. A little monkey with a pipe had bounced up from the smoke over the room and out the window, perhaps. The old scholar wasn’t sure what he’d seen. It had been so quick, had burned so vividly just for that moment. This very short person dressed up as a monkey. A ghost they might have been, so naturally smaller than us. He could not remember. It was hard to remember in the city. He had thought the window had been shut.

Aurelie heard this story many times on her way to Sacred City, walled city in the hills. The old man had gone to the window and cried out after the golden child. He had watched for so long for something to happen. It had happened so swiftly and then they were gone, all gone. He kept watching the flames from the mornings to the nights. Everything in this realm found meaning in the other. Everything has a higher purpose. There are patterns in the flames, he would say. Crackles, thorns and flashes, quiet hollows into which the ash collapses. The flames are a language of their own, she was told. A new sort of verse. And what have you heard, of the heavenly realm?

She met a musician on the road, a singer. They asked, “Have you heard of the New Earth they found? It’s a New Earth, but it’s ten times bigger than this Earth. It’s Earth, though. It’s Earth, but nothing is the same. Haven’t you heard of that yet? It’s ten times bigger than Earth, but it’s Earth. It’s another Earth they found, another planet. So they call it Earth. The New Earth, where all is possible, where everything can be imagined”, they said. “That’s where I’m probably from.” They were both on their way to Sacred City.

Outside the city in the orchards, they were dreaming of paradise. In the meadows, reclined, lying down in fields of golden thread, dreaming, some of them were meditating together under the trees: poets and artists, musicians and their lovers. Young men and women of the court. Emptying their minds under the mulberry trees, spinning dreams while above them the silk worms wove and at dusk the glow worms pinged in the long grass. Five trees had butterflies in place of leaves, the same trees every spring, where the butterflies would stop and rest a while, with their colours on their wings. Poets gathered poppyheads and scored them with fine curved blades. They left them out in the milky evening sun to bleed, on the pale gummy slopes of the hills, around Sacred City. They offered Aurelie pink lotus flowers to drink, so that she might vibrate more resonantly. They wanted to sleep, to dream of the New Earth, of how it might be. They sketched it in their notepads, they wrote it automatically.

The way to the New Earth they said, was in Sacred City. There was an entrance in the palace, in the galleries built for the King. The King had flown with the cranes in the sky. Flown over underwater cities sunken in the sea. As a boy, a prince, he had gone down into the caves to see the paintings on the walls of the cave, and lit some small fires, had watched the painted animals and the old gods running, skipping in the firelight while his servant carefully, gently, shaking with fear, strangled him with silken rope. He had made love to his stepbrothers, his stepsisters too, and they had had their ways with him, and they had been the King. They’d told the court painter to watch and to paint.

He was the wealthiest person to have walked on this Earth; this old Earth, this tiresome dying Earth. He had touched the golden square. Had watched men beheaded in faraway places. Watched them set themselves on fire and studied the flames. There were no limits to what a man could want, said the King, and everything he got, he just wanted more; every new sensation left him feeling less, and each morning the world was made smaller, he thought, and everything in it more grey. He was very afraid. The holy colours were fading from the hills like the paintings on the walls of his halls, his dark chapels.

Inside Sacred City Aurelie walked right to the palace, the galleries. She came with a new idea, she told the guards. She was expected. They left her alone there. Inside each chamber was another, behind more folding screens, in the gloom, in the smoke from the incense that was brought up the incense trail. The further she went, the thicker the smoke, the more the world seemed to melt away, to become less heavy and binding, come loose from its ground. She continued. At the last paper screen, she could go no further. There was nowhere else to go. Now she split herself in two. She watched herself step inside. Aurelie, in the gallery, watched herself walking into the smoke in the framed panel of the screen, like a painting of herself. Aurelie 1 watched Aurelie 2. She saw that Aurelie 2 was glowing slightly from within.

In patches where the smoke dissipated, cleared for a moment, the Aurelies caught glimpses of trees under which flowers bloomed. The shimmering world. There were figures dancing in the fogs, the mists of the shimmering world, just shadows really, turning blurry at the edges, in an odd, blurry dance. Moving stiltedly, awkwardly like no person she’d met, no animals chased in the woods. They wore masks with no expressions on their faces. They wore furs. Now she couldn’t make out their forms again. Now Aurelie 2 had a tail, smoke was rising from her face.

Far away in the distance was a city, a faint silhouette of a city frottaged in the smoke, in the foothills of watery blue mountains. It looked like Sacred City, like an old familiar place. New Earth looked to them like the old one but smaller. But floating in the smoke. Here on the coast where the tide is always coming in. Where the cherry trees are always in blossom, where the flowers are bright and they bloom every day.

Now imagine the warmth of the afternoon breeze. Gods blowing on the back of your legs. Shivers alight on your face, on your temples. The nobles spoke to her on every side. Voices honeyed, whispering pearl milk, New Earth verses, where everything is different. Now open your eyes: Aurelie 1 was back in the orchards, outside the city walls. Aurelie 2 was gone. Now tell us what you saw.

In the smoke you had visions. Can you recall? Things that you’ve seen in the smoke. Bright visions!! There were colours in the smoke, holy colours never painted, colours only the beings can see. There are 18 primary colours. Poems etched in the smoke in the language of flames. In the fires, New Earth. They spoke of the New Earth. The New Earth New Earth New Earth New Earth! The King! His artists, his architects, his spiritual advisors, jesters, poets, scholars, young ladies of court in the finest clothes, bards, eating flowers, drinking wine, petals falling from their mouths, honey smeared over their chins, tumbling, came to her and asked, “What had she heard, of the heavenly realm?” and, “What did you see there?” they shook her, vibrating, “What does the New Earth? When is the New Earth? What have—” they yelled, they screamed in her face, “The heavenly realm! The shimmering world! Where do you dream of! Where do you dream of! What do you see!” they looked crazed, terrified, mad, twisted, bleary, bloody-eyed in the fields.

DEAN KISSICK is Spike’s New York Editor. The Downward Spiral is published online on the second Wednesday of each month.