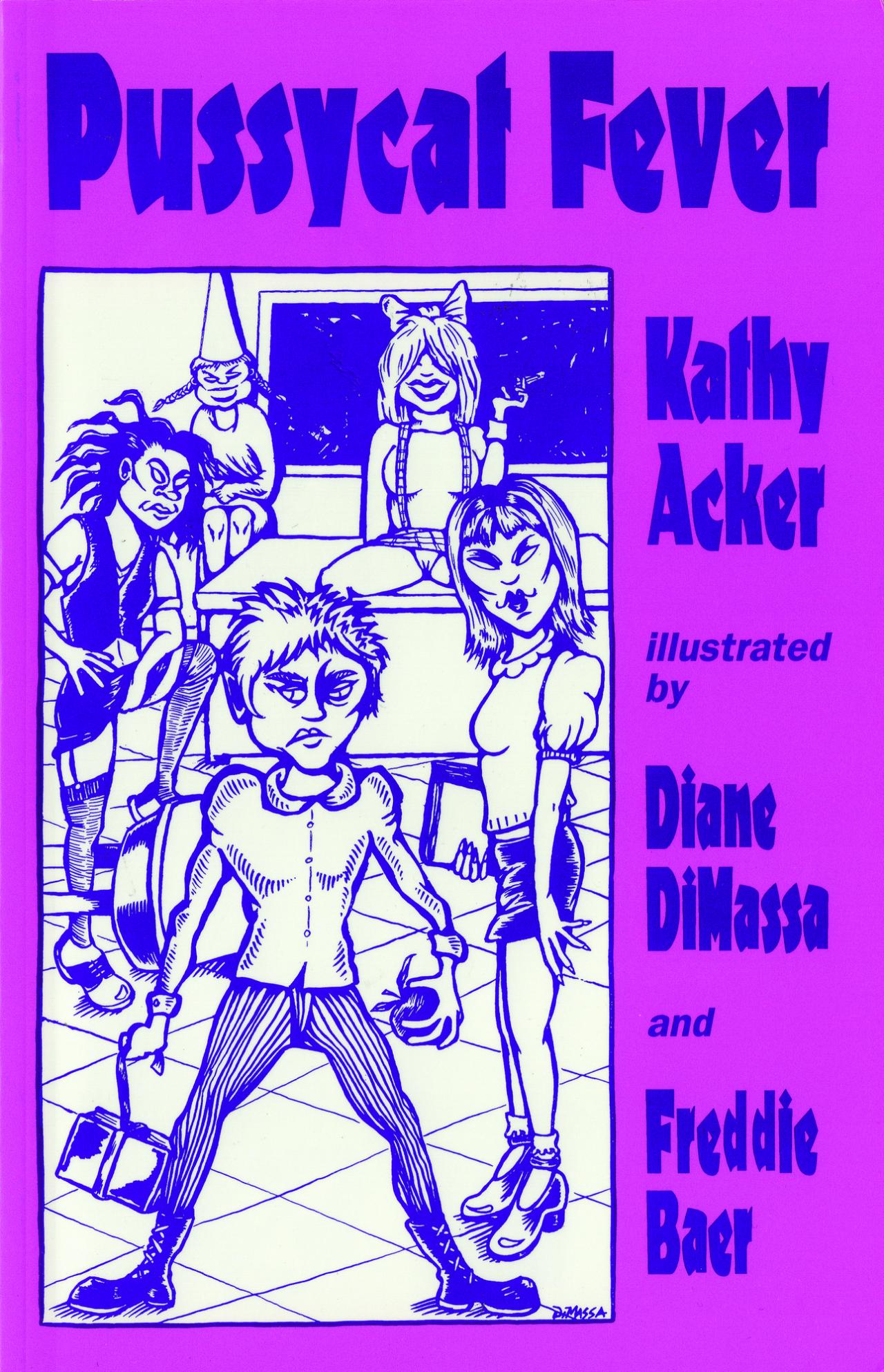 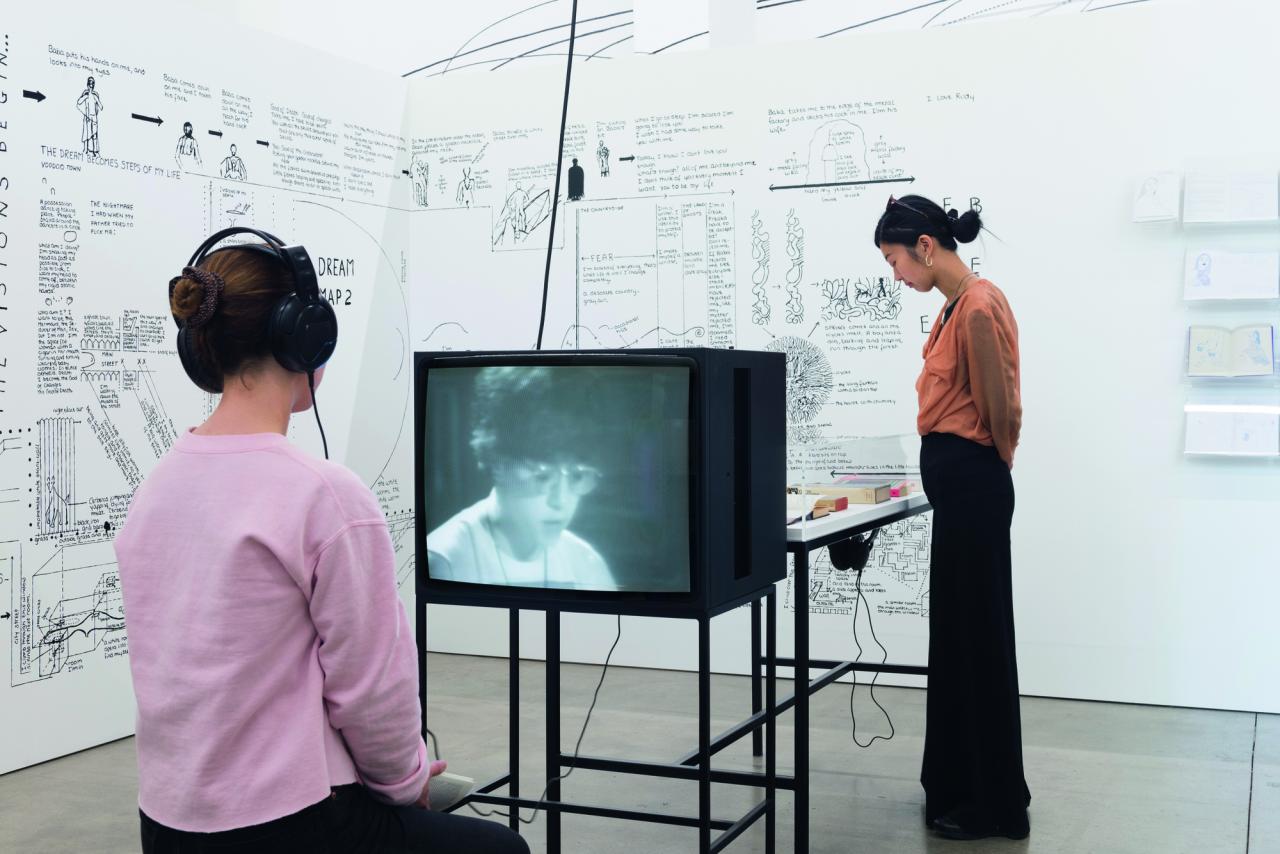 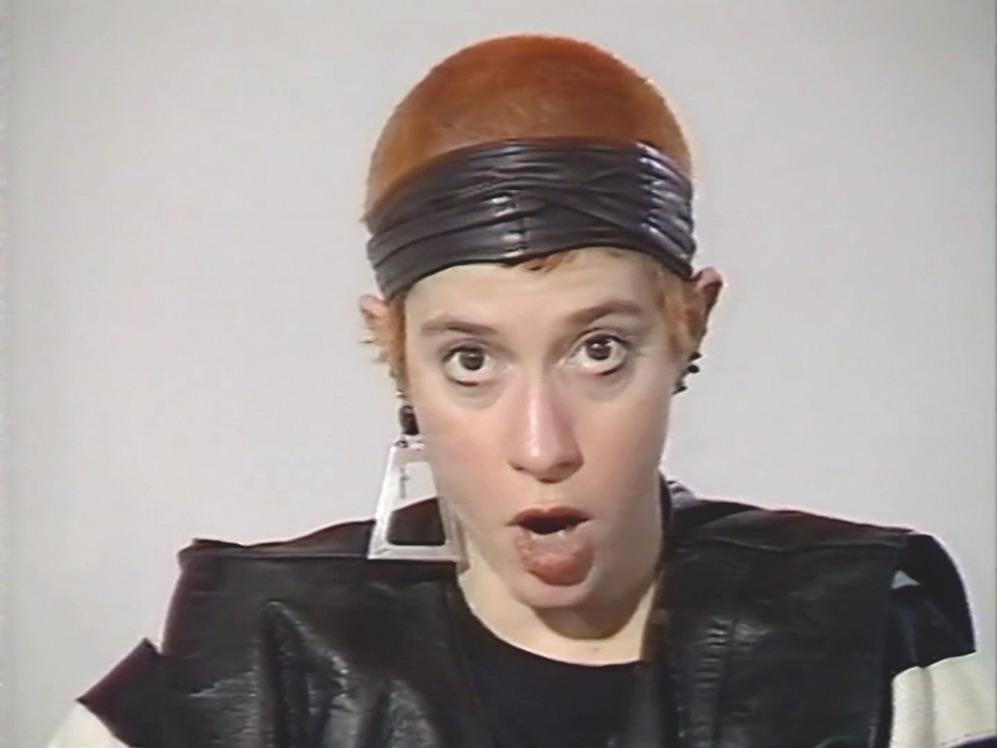 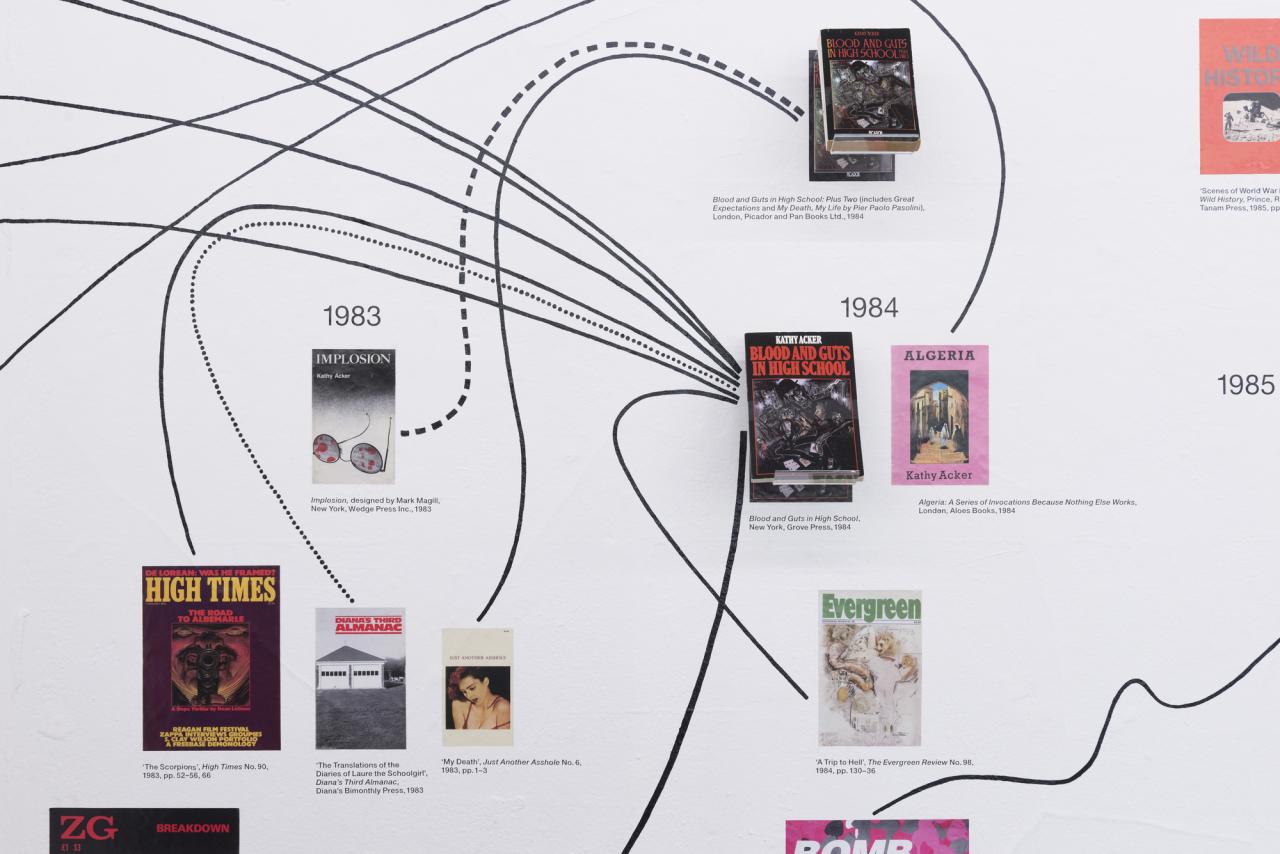 “In a certain sense, [Kathy] Acker lied all the time,” her biographer Chris Kraus wrote of her “parasocial” peer. Kraus told the Guardian: “She desperately wanted to be a cult figure, and she achieved that. But it backfired; it came at the expense of her work.”

“I, I, I, I, I, I, I, Kathy Acker” is Acker’s first retrospective (of sorts) in the UK. The exhibition brings together fragments of her work as “catalysts for a network of interconnected materials” and sets out to further canonise the artist, poet, essayist, avant-garde, heretic, and punk among fellow artists of yesterday and today. It isn’t the first attempt to enmesh her work in a network as a “single protagonist to traverse an entire milieu”, as Kraus says, or to name her “our lady of desperadoes”, as Diane di Prima does in her poem “Litany (for Kathy Acker)”, to try to cauterise her signature, highly socialised, emotive alienation.

The heart of the exhibition is Acker’s performative self. What one press release calls the “staged persona that parallels the performative, eclectic nature of Acker’s texts” is visible in glimpses across gelatin prints, old VHS footage, assorted personal effects and the text extracts which lend structure to works gathered from other artists. These objects, words, images are underscored by a timeline of Acker’s prolific output spanning from the late 60s to her death in 1997. There’s no question that there was something about this “strategically” vulnerable woman which was infectious. Yet encountering so much confessional artifice and inward-gazing material in one place serves a reminder that even resilient authenticity can start to feel staged or oppressive without limits. It always feels pretty disingenuous to me when alternative bodies, lifestyles, and other expressions of identity are offered as a sort of gritty realism or aspirational escape from, or resistance to, hegemonic mores – and capitalism, as if raw, private parts of the self aren’t exactly what it’s designed to take in one way or the other. Acker’s astrologer gave out business cards at her funeral after all.

Another press text refers to the cult writer’s “unresolved forces” unfolding through the work of other artists and writers after her death. What can these forces tell us today? Perhaps – particularly in the age of both unavoidable self-curation and cancel culture, where rigorous judgement of certain selves is rampant – that a sparse anti-perfectionism in form must be admissible (even defensible), as in the prints of Sidsel Meineche Hansen, the drawings of Reba Maybury, or crude animations of Candice Lin. Beneath Hansen’s prints is one of several vitrines of books with an accompanying audio recording of Acker: “I didn’t really care about nice writing, I was a Burroughs freak.” I can’t help wondering what she might have produced if she had cared, or realised that not caring is a way of caring so deeply that the feeling can’t even be broached. Today at least we can ask, is it still radical to consecrate suffering and ostracism? To worship niche but unmistakable variants of narcissism and trauma?

There is respite. A comic lightness in Julien Ceccaldi’s four studies in party-circuit despair and the fizzy quirk of Lin’s19-minute holograms. The exhibition opens with a Super8 colour film, Rich & Poor (1977) in which X+Y (Coleen Fitzgibbon and Robin Winters) pose questions about the nature of wealth and poverty to New York pedestrians with an unguarded approach that feels so much more generous than the avenues for discourse afforded by social media today. It’s refreshing. Open, but not gaping. In contrast, Acker’s Blue Tape (1974) made with Alan Sondheim is shown on a screen at the rear of that work. A close-up of a labia being fondled as a monotone voice complains “your fingers are really dry.” But Sondheim tells Acker at the beginning “I’m not trying to attack you.” I wonder if that’s true and if it could be a response to the tone of the exhibition. Blue Tape is overly serious and boring. Like trying to get yourself off before you’ve figured out how.

I try to find its lack of intimacy interesting, to think about the plausibility of de-sexualised desires, or gendered power imbalances, or void, but find myself flailing in anaphrodisiac neurotica. It’s hard to define what Acker (or her peers and acolytes) figured out since she twisted her own narratives in so many directions without ever really finding a way to transcend them. Like all selves put on or off display, this is a tangle of identities. It makes no attempt to hide or submerge this complexity but might be accused of glorifying it. Perhaps that can be forgiven.

Kathy Acker in conversation with Angela McRobbie at the Institute of Contemporary Arts, London 1987