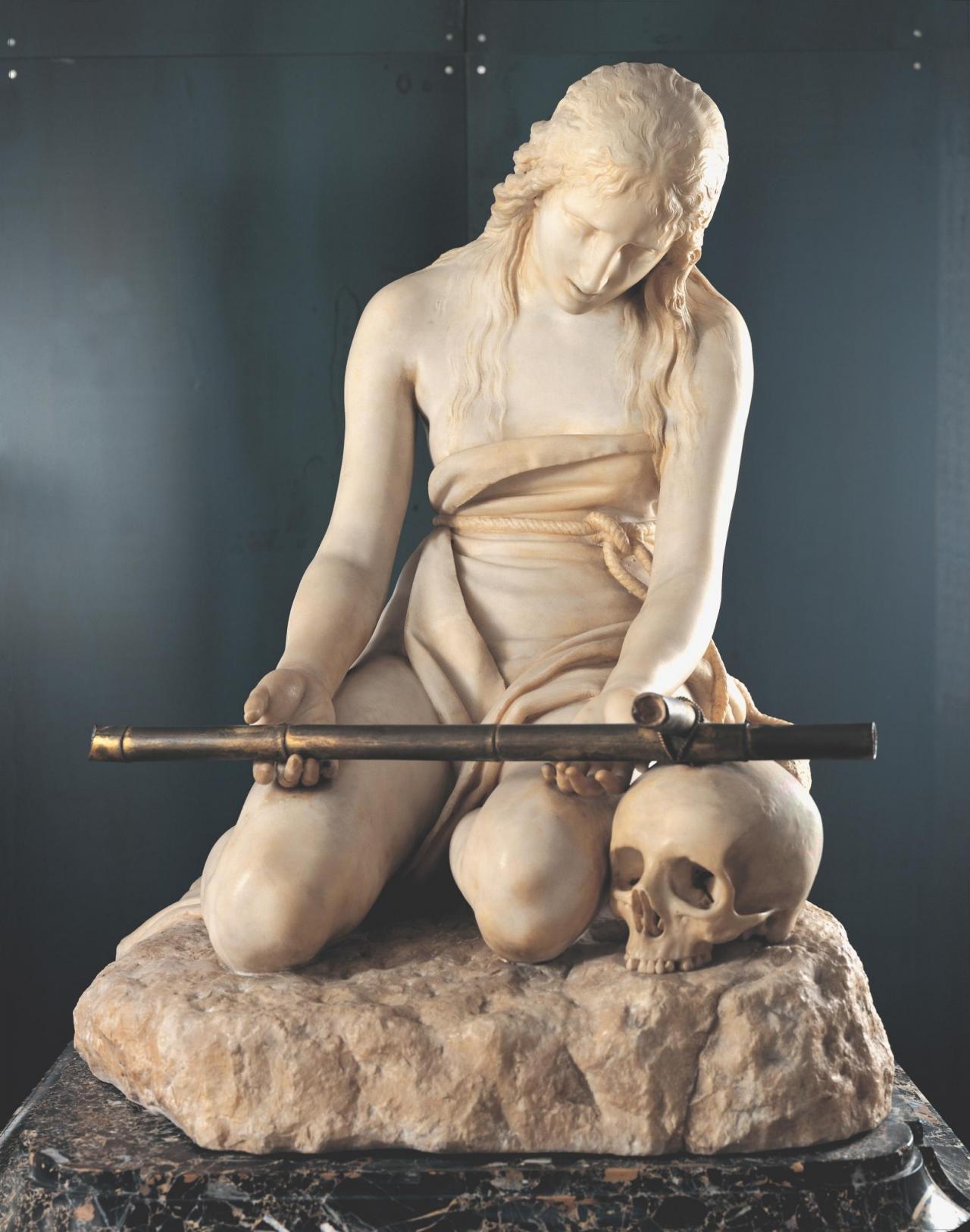 I found a note from a patient. It said, “guilt is a dull knife.” I then found a note to myself that remarked on a running refrain in my head that riffed on Neil Young’s “Helpless”: “In my mind, I still need a place to go. All my changes were there.” I went on to detail rage at my parents for having decimated one home after another. Setting up a stable home in my own life has been very difficult; it’s as if I have to pay for this childhood rage. Tired as I am of this cliché́, especially as it applies to women, I must be very guilty.

Finished Sheila Heti’s Motherhood on a flight from Heathrow to Rome. Twisting tornado of depression overtaking a woman who believes she is forced to choose between her gleaming career as a writer and becoming a mother before her body sheds its fertility; the closed form of the book a coin toss that begs the universe for answers such as “yes” or “no”. She is guilty if she chooses not to have children, guilty if she chooses to have children, guilty if she chooses both and then fails. So guilt is inevitable. In the end, the book’s protagonist (the auto-fictive Heti) took some antidepressants and reconciled herself with her mother, who liked the book that in a sense was directed at her for having been a bad mother. Motherhood is the name not for the act of having a child but for being guilty and tormented by ancestors.

The plea: Let’s escape together, all of us women.

Most of the women I know who commit no real crimes are looking for a way to escape guilt. Freud had a lot to say about this at the end of his life, words that very few wanted to ponder (in fact, they said it was just a dying Freud lashing out) because it seemed so damning. They disavowed his warning that guilt needed to build an escape hatch for itself that involved neither pharmaceuticals nor reconciliation with family. It looked more like the impossible task of taking with full intensity how we feel pleasure and unpleasure, no matter how at odds with societal mores, no matter how painful and tied to trauma that encysts through the medium that is guilt. This “solution” would cut deeper and wider than the bourgeois vs. bohemian tale of two cities – God help me – as if it’s simply a matter of lifestyle choice.

I’ll think about it more in this Catholic country I’ve come to. I’m going to go look at Caravaggio’s Crucifixion of Saint Peter now. This upside-down death!

“All art fades but sex fades fastest.” I viscerally disagree with Eve Babitz. Yet here I sit, dipping into the pages of her novel Slow Days, Fast Company. Reading: that classic summer escape valve – this ritual, artificial, seasonal suspension of everyday drudgery and obligations. Babitz’s meandering vignettes of LA in the 70s are hedonistic and selfish. Its shallow content infuriates me, even if her sharp prose keeps me turning the page.

Disgruntled, I mumble about this theme of escape and my eight-year old son chimes in, unsolicited: “It’s only temporary. You can never really escape, mommy.” Together we free associate: flee, drift, delay, procrastinate, evade, dérive, divert. The avant-garde often invested in strategies of temporary elusion. Yet guilt is the backstop that abruptly ends escapist reverie. Guilt lurks at the bottom of each bottle of summer rosé, so let’s savour its heavy flavour profile. Great art endures especially when it grapples with the onerous stuff. Burden, guilt, loss. Is there a formulation of humanism based on the commonality of guilt? That thing all of us humans long to escape but cannot? Capitalism is always shilling “guilt-free” delights: soda, carbs, booze, movies, shopping, debt. Whereas art needs this guilt – it runs towards it, making it the core substance.

For the past few summers, I’ve navigated through the sweaty alleyways of Genoa just to see Canova’s Maddalena Penitente in the Palazzo Doria Tursi. How could marble embody the pain, grief, and expiatory intensity of this woman for centuries? Just contemplating the physical embodiment of her guilt helps me better embrace my own.

I decided this summer to read only women. I started with Claudia Rankine’s Don’t Let Me Be Lonely: An American Lyric – “In my dream I apologize to everyone I meet. Instead of introducing myself, I apologize for not knowing why I am alive.” Sylvia Plath’s short story Mary Ventura and the Ninth Kingdom – “‘It’s still not my fault,’ Mary exclaimed vehemently, but the woman’s eyes were upon her, level after blue level of reproach, and Mary felt herself sinking, drowned in shame. The shuttle of the train wheels struck doom into her brain. Guilt, the train wheels clucked like round black birds, and guilt, and guilt, and guilt.” All laced with it. What are the chances?

The Ninth Kingdom is the land of the frozen will. Plath gate-crashes guilt, leaving the train by pulling the emergency brake – every system has a rule that can be used against it, she is told by a woman who is not her mother (her mother having bought her ticket for this death train).

It might seem an inappropriate time to try and escape guilt – with so many we want to see put on trial, with so much justice needed, with one side attempting to police the other. But the psychoanalytic lesson is aimed here: when blame, shame, revenge, forgiveness, and rage are the only cards on the table, we are trapped, hemmed in on all sides by a guilt that is the bottom line. We need to come out of this, all of us, together. Not through shameless- ness but through humility – and also courage.

What great expectations did we have to wind up feeling this bad?

Done with Babitz, I return once again to Stefan Zweig. Actually, I want to read men. Countless bad stories generate a low buzz, a powerline in the backyard of my mind: Jeffrey Epstein’s “suicide”, xenophobic mass shootings, migrant children in cages, kids ripped away from their parents in ICE raids. No (electoral) end in sight. Carefree escapes of mid- summer feel irresponsible, self-indulgent, yet momentary respite imposes itself lest we drown in those bad feelings. I want to find hope in Zweig’s Beware of Pity – I am constantly returning to the book’s epigraph, on two kinds of pity. “There are two kinds of pity. One, the weak and sentimental kind, which is really no more than the heart’s impatience to be rid as quickly as possible of the painful emotion aroused by the sight of another’s unhappiness, that pity which is not compassion, but only an instinctive desire to fortify one’s own soul against the sufferings of another; and the other, the only one at counts, the unsentimental but creative kind, which knows what it is about and is determined to hold out, in patience and forbearance, to the very limit of its strength and even beyond.” Are there two kinds of guilt too? The main character in Zweig’s novel is goaded into falling in love with the manipulative, crippled woman who was the source of his original pity – pathological love. Cannot this conception of guilt become a generative force? Generating purpose and duty? This black love feels urgent; better than no love. Zweig’s Austro-Hungarian end-of-empire tales may not denounce the evident malevolence of his own time, but the emotional complexity of his characters obliquely addresses how we might move forwards. Indirectly, but creatively; full of contradictory, painful affects, which make us impatient and want to take it all head on.

Emotional intensity as space carved from a dull knife – from behind, up the rear, indirect, drift, derive, upside- down, on our knees, emergency brake.

ALISON M. GINGERAS is a curator and writer. JAMIESON WEBSTER is a psychoanalyst and writer. They both live in New York.

– This text appeared in Spike #61. You can buy it in our online shop –

The End is Night 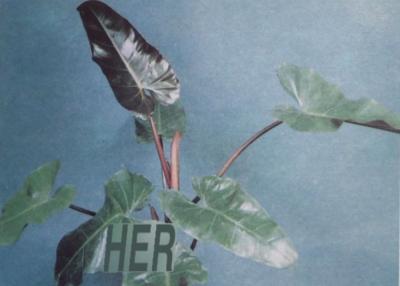 The League of the Willows 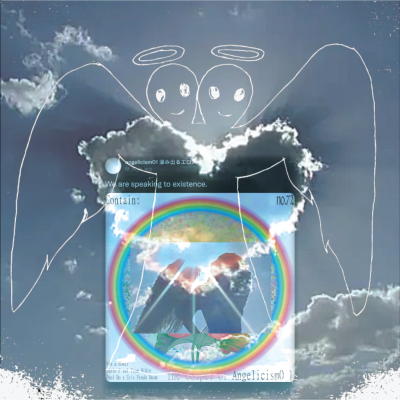 We Are Speaking To Existence

Substack bloggers, Soundcloud rappers, and podcasters cull transient strangeness from the corners of the internet in a new kind of archive, epitomised by the entity that calls itself Angelicism01. 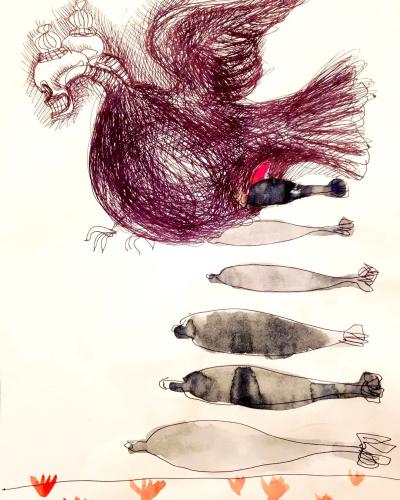 The Digital Fog of War

What happens when propaganda pushes post-truth directly onto the battlefield? Milena Khomchenko, a writer from Kyiv, reflects on the “informational front” of the war in Ukraine. 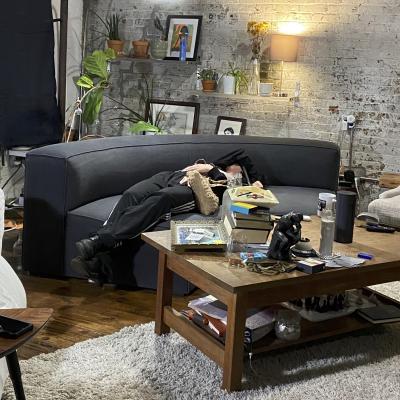 Down and Out in Dimes Square

A new play by Matthew Gasda takes on the politics and power-plays of a notorious Lower East Side locale. 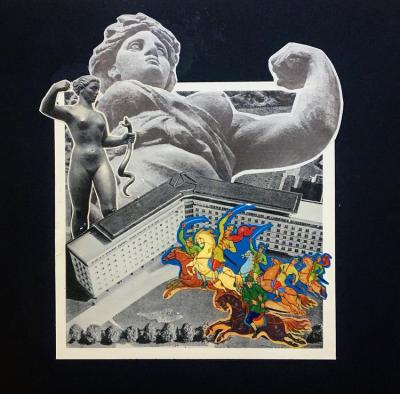 Notes on One War

Lina Romanukha, a curator and cultural worker from Kyiv, Ukraine, shares diary entries from her daily life during the early days of war. 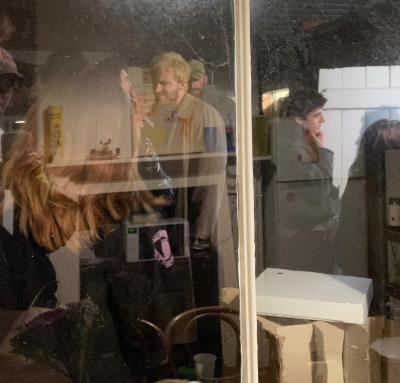 Opening of “Full of Love and Contradiction” at Asbestos. Photo: Josh Krum and Aden Miller 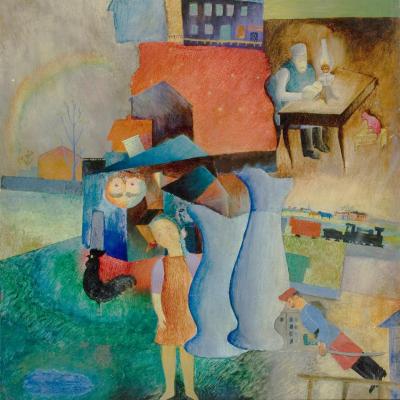 Henryk Streng/Marek Włodarski, Childhood Memories (1924). Henryk Streng was born in Lwów, Poland (present-day Lviv, Ukraine) in 1903. In 1942 he destroyed all of his documents and acquired new papers under the name of “Marek Włodarski.”

Dean Kissick corresponds with two young arts workers from Ukraine, who share firsthand accounts of the war that is currently unfolding. 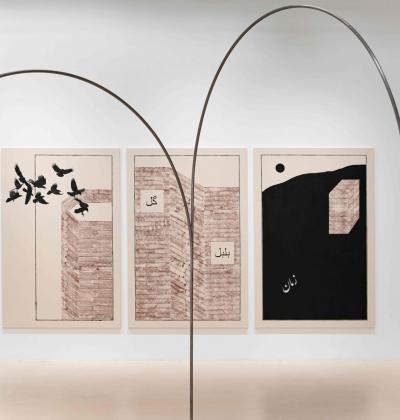 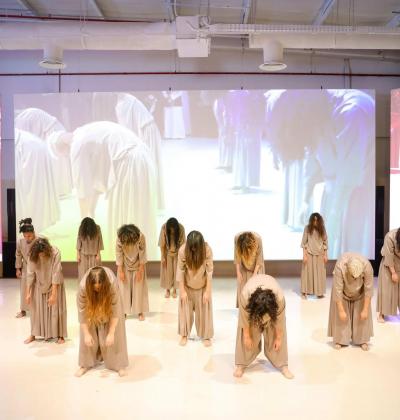 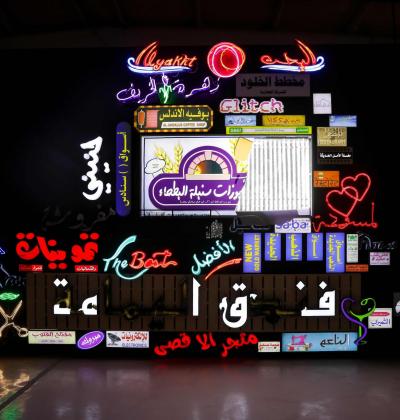 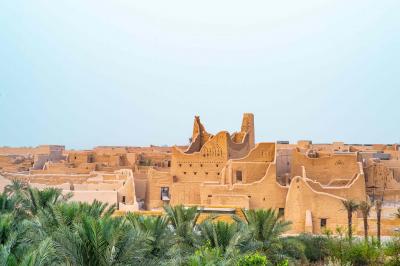 Diriyah Biennale, Between the Lines 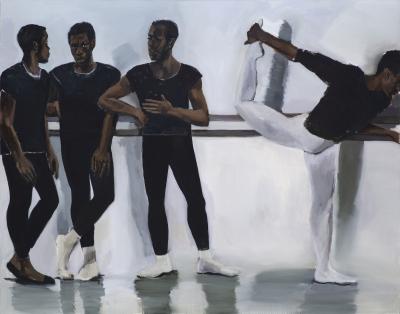 A wave of figurative paintings, by black painters and focused on black subjects, has spawned a ubiquitous new style – but has market pressure pushed artists’ radical intentions into something more palliative?