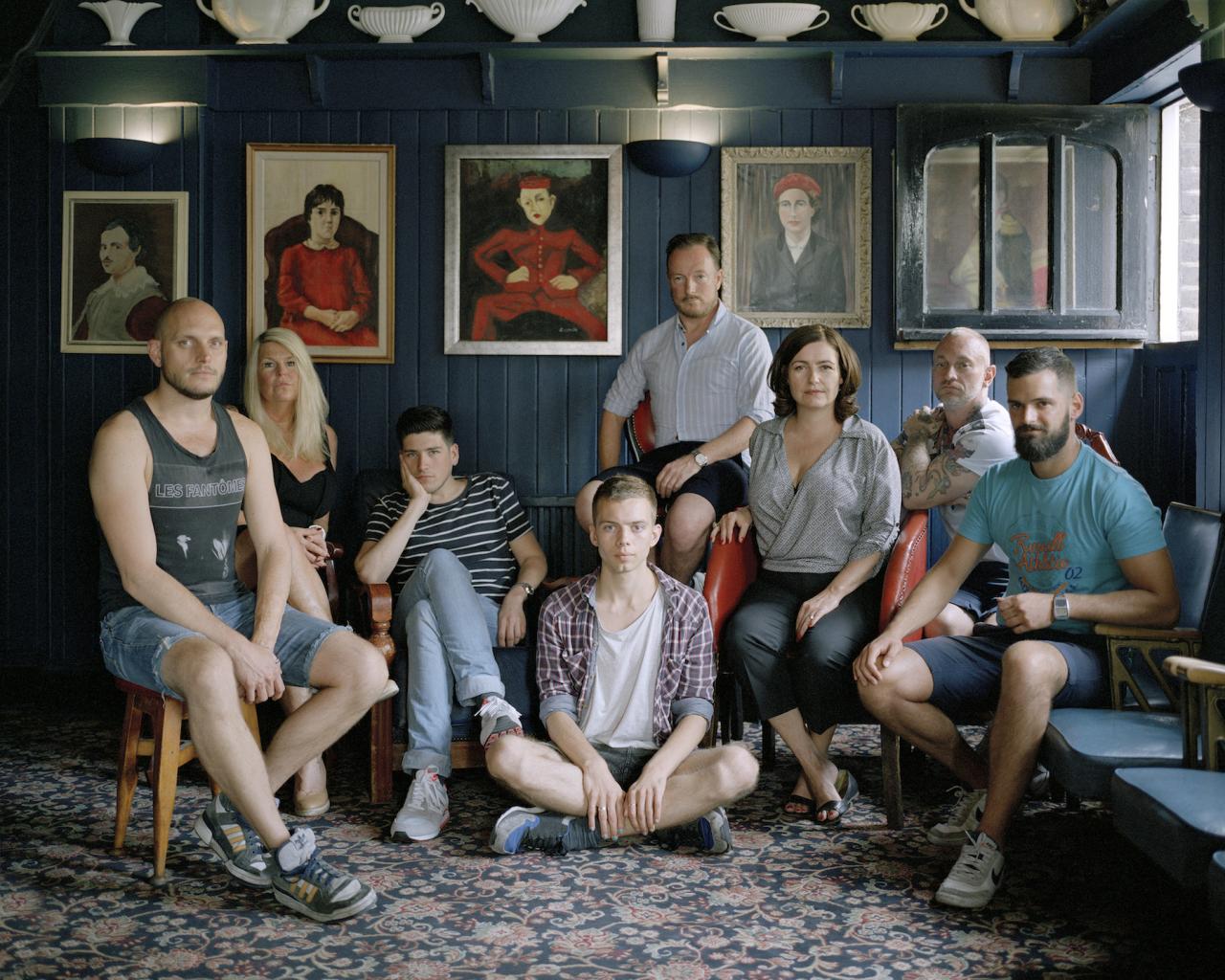 The artistic critique of capitalism wanted to liberate us from the chains of conformity, but at the same time the social security net was being dismantled. Then neoliberalism turned this hard-won freedom into a duty and everybody became an artist. If, in 1968, breaking with the family was a prerequisite to living as one wished, fifty years later it is back with redoubled force. Through highways and byways, we have come full circle.

Who gets to be a creative person? This is by no means the most high-stakes question in the ongoing culture wars, but much of the social protest in the late 1960s was often characterised (and dismissed) in those terms: as a concern not for social justice but personal fulfilment. In 1969, American historian Theodore Roszak’s The Making of a Counterculture drew on the likes of Herbert Marcuse and Norman O. Brown to rail against the “technocracy”, which threatened a “ruthless depersonalisation” that would make human beings into “purely impersonal automatons”. He interpreted the permissiveness of youth culture as a new form of protest against the “system”, fuelled by the postwar prosperity that system apparently produced. “Economic security is something they can take for granted,” he wrote of the emerging Baby Boomers, “and on it they build a new, uncompromised personality, flawed perhaps by irresponsible ease, but also touched with some outspoken spirit. Unlike their parents, who must kowtow to the organisations from which they win their bread, the youngsters can talk back at home with little fear of being thrown out in the cold.”

In The Greening of America (1970), social scholar Charles Reich similarly posited that conformity and alienation were the basic social problems of a totally administered society, eroding the capacity for difference and engendering instead a world of single-breadwinner households and relatively stable employment, families anchored in patriarchal heteronormativity and systematised consumerism. He championed the emergence of a new consciousness, which he termed “Consciousness III”, among the younger generation. Like Roszak, he interpreted this as a rejection of traditional forms of protest, “revolutionising the structure of our society” not through “direct political means” but “by changing culture and the quality of individual lives”.

From the point of view of such critics, political resistance was more a timeless generational struggle between the idealistic young against their “realistic” elders, than it was a matter of reacting to the historical conditions producing oppression or deprivation.

"As more workers found their lives increasingly precarious and their income unstable, they were encouraged to enjoy their quasi-bohemian freedom and to maximise the opportunities such conditions afforded them"

But maybe countercultural ferment wasn’t just young people being young. A different interpretive tradition saw it instead as a direct ramification of industrialisation and modernity, a mode of resistance that couldn’t end capitalism but rather helped it evolve. Sociologists Luc Boltanski and Ève Chiapello in The New Spirit of Capitalism (1999) would label what Reich and Roszak saw as generational conflict as a broader manifestation of the “artistic critique of capitalism”, a recurring concern with inauthenticity and the loss of personal agency that stems from commodification and wage labour. This concern leads to increased demands for “autonomy and self-management, and the promise of an unbounded liberation of human creativity”, with protest taking the form of the rote rejection of authority, “transgressive” acts of “free expression”, and what Boltanski and Chiapello describe as the “contestation of the bourgeois family”.

The problem with the artistic critique is that it can be disentangled from what Boltanski and Chiapello call the “social critique”, which emphasises income inequality and the injustice of poverty. It became possible for capitalist reformers to essentially play them off of each other, so that broad demands for social justice were met with concessions that extended individual employees’ flexibility and autonomy. So as more workers found their lives increasingly precarious and their income unstable, they were encouraged to enjoy their quasi-bohemian freedom and to maximise the opportunities such conditions afforded them: Work from home! Experiment with different careers! Collaborate with your friends! In this way, capitalism could recuperate social protest and extend its logic further into everyday life, normalising the idea that all your passions and affiliations should be productive. No more were conformity, mass consumerism, and the strictures of the conventional family structure to be the price of admission to middle-class life, with “self-actualisation” sacrificed to assimilation into stable corporate structures and bureaucracies. Now workers are reconceived as visionary entrepreneurs who are encouraged, if not required, to actualise the self, developing as many aspects of their identity as possible to demonstrate their economic fitness and selling themselves to survive.

"We are invited to share and express ourselves constantly and turn all our extra capacity – whether it’s our time, space, personal belongings, or relationships – into explicit forms of capital"

Communication technology and social media have been developed towards this same end, allowing for the ongoing extraction of individuals’ creative potential. We are invited to share and express ourselves constantly and turn all our extra capacity – whether it’s our time, space, personal belongings, or relationships – into explicit forms of capital. As such, social media and the various platforms of the “sharing economy” constitute a hypercompetitive, always connected, twenty-four-hour realm in which individuals fight for reputation, attention, influence, status, and opportunity.

Everyone is invited to be creative, improvisational in their self-presentation, and resourceful in acquiring skills without requiring training from employers. In this sense, workers are compelled to become self-taught artists of sorts (while artists have been increasingly expected to formalise their expertise with MFAs and institutional affiliations). Critics such as Ben Davis can then make the case that contemporary artists – apparently living on their own terms but engaged in a constant hustle to leverage their social connections for reputation and economic viability in the art world – are in fact the quintessential bourgeois role models, demonstrating how to live a life fully devoted to monetising creativity. That the life of an artist retains a faint aura of countercultural rebelliousness only helps lend glamour to the otherwise demoralising conditions of neoliberalism. Like an artist, you get to try to do what you love – and we all suffer for it.

Though the artistic critique of capitalism may have abetted the rise of neoliberalism, that doesn’t necessarily mean it should simply be reversed. It’s easy to see in a degraded version of the artistic life – with its destabilised social relations, self-exploitation, and the struggle for subsistence – an appropriate punishment for rejecting the comforts of conventional family relations, the “haven in a heartless world”, as social critic Christopher Lasch wistfully labelled it.

In her 2017 book Family Values, political theorist Melinda Cooper argues that “the idea that the flexible labour relations introduced by neoliberal reform have somehow disabled the long-term obligations of love and parenthood is pervasive among left-wing social theorists interested in the effects of late modernism on the structures of intimate life.” Such theorists suggest that in, say, promising free love, the counterculture made emotions entrepreneurial and commodifiable, inadvertently abolishing love altogether. Artists were held to be similarly culpable, turning creativity into a product rather than a mode of personal growth.

"If the family takes priority over society, then it follows that the prerogatives of family inheritance should be strengthened, estate taxes abolished, and redistribution to address income inequality abandoned"

But the sustained critique of the family in the 60s was not carried out in the name of possessive individualism, as neoliberalism might make it seem, but for less coercive forms of intimacy that could correspond with a truly universal social safety net. Such a net was never fully woven in the postwar era, and this ultimately came to discredit the larger project of reimagining intimacy. It became easy to paint the youthful counterculture as elitist and out of touch with the cascading effects of racism and poverty, if not complicit in them, as the already inadequate traditional forms of social support and government aid were cut or abandoned. The turn inward, towards “human potential” movements and the like, during the 1970s morphed easily into entrepreneurial efforts to maximise human capital while turning away not only from the traditional family but also from broader social obligations.

Cooper detects an ultimately conservative nostalgia in a critique like Boltanski and Chiapello’s, which “posits the restoration of the Fordist family (or some revision thereof) as a necessary component of a renewed left agenda”. This, in Cooper’s view, does nothing to counter neoliberalism; rather it complements and, ultimately, completes it. She asserts that for neoliberalism to succeed in dismantling social welfare programs, it must simultaneously reaffirm the family as the limit of collective responsibility: parents are responsible for their children, who in turn will become responsible for elder care. Society at large, in this view, has no particular responsibility for the wellbeing of its members; beyond the family (conceived along white, heteronormative lines), social relations should resemble the contractual relations of market participants, governed not by solidarity but exchange. If the family takes priority over society, then it follows that the prerogatives of family inheritance should be strengthened, estate taxes abolished, and redistribution to address income inequality abandoned.

Essentially, neoliberalism and the values of family stability and intimate bonds – whether grounded in a leftist humanism or a right-leaning social conservatism – are not at odds, and any interpretation of the culture war that regards them as enemies fundamentally misunderstands the stakes. So does a view that sets identity politics against class politics, as though both were reducible to lifestyles. As Cooper argues, “The Fordist politics of class was itself a form of identity politics inasmuch as it established white, married masculinity as a point of access to full social protection.” Rather, the culture war is fought by positing fractures between identity and class politics, between artistic and social critiques, between creative and noncreative people.

ROB HORNING is an editor for Real Life and a regular contributor to the New Inquiry. He lives in New York.