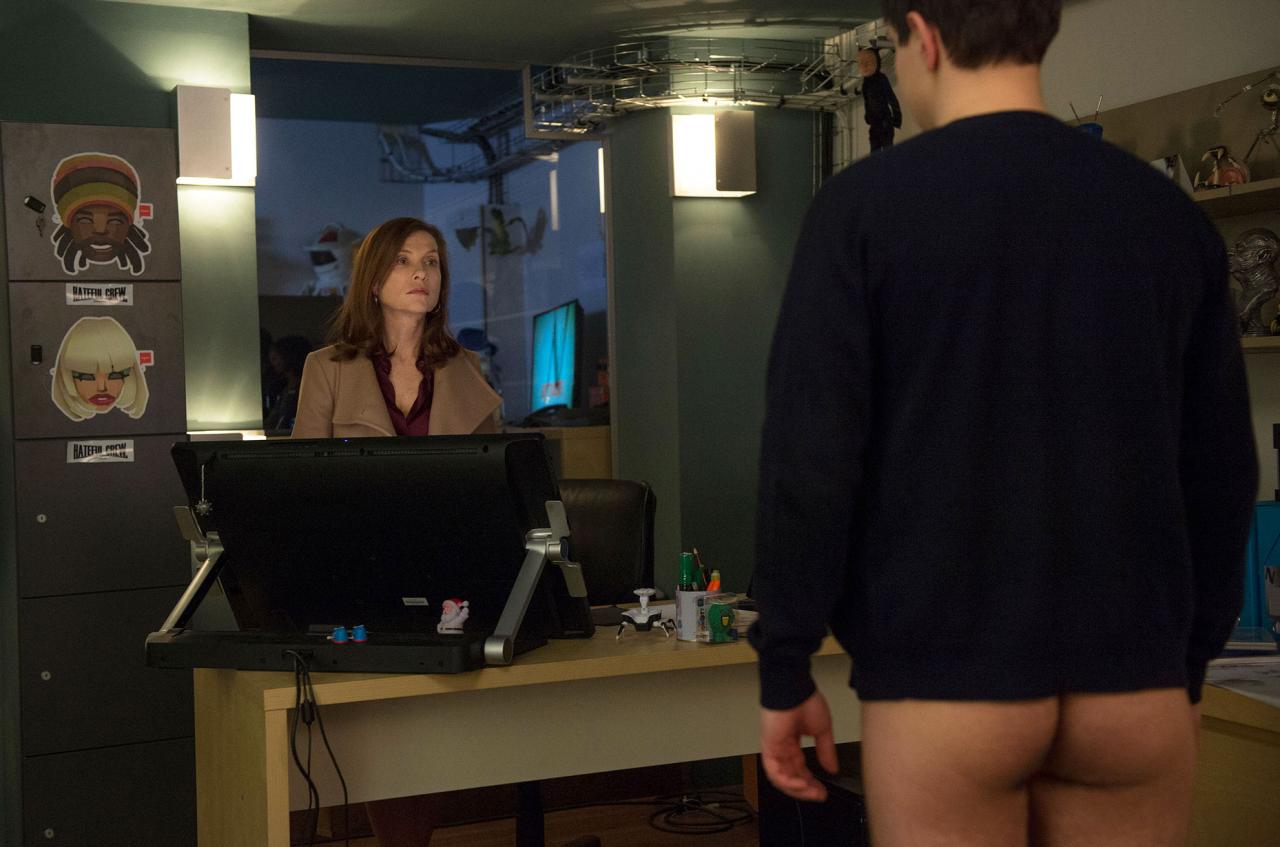 Elle opens with the rape of 60-year-old Michèle Leblanc. It segues into the story of a dysfunctional family and a woman who refuses to be a victim.

Derrida was the father of Logos, Logos being the name of his cat, and ironically it was Logos who often caught Derrida speechless. Few things are more silently shameful, the philosopher wrote, than “the impropriety of finding oneself naked, one’s sex exposed, stark-naked before a cat that looks at you without moving, just to see.”

A cat is the first thing on screen in Paul Verhoeven’s Elle, a cat watching with us as Michèle, a woman of 60, gets raped in her apartment after work. Because Michèle is Isabelle Huppert, who couldn’t play the victim to save her life, she waits for the rapist to leave, then takes a bath instead of crying, orders sushi instead of calling 112. She has no one to report to. She is her own boss; she owns her business, her apartment; she owns her son’s apartment. At dinner with her exhusband, her only friend (who is also her business partner), and her only friend’s husband (with whom she is having an affair), Michèle orders a bottle of champagne before saying, “I suppose I was raped.” Otherwise she doesn’t mention it, even when it happens again – the tall dark rapist in a ski mask, the window forced open, the china smashed. It’s a comic- book rape in a movie described as a “rape comedy.”

Yet Elle is no more about rape than a James Bond movie is about nuclear weapons. It’s correct to say that a violent image triggers a traumatic memory, releasing it bullet-like into the brain; it’s more common to say that an image triggers you or simply that I’m triggered, as if you or I are now the gun in the equation.

Verhoeven makes the rape itself a trigger, a device to spring open the plot.

His and Huppert’s Michèle is triggered for the first and last time when she looks at her cat, seeing what the cat must have seen. She goes on to be a weapon without a safety, as trigger-happy a bon vivant as Bond.

Casualties abound fast. Her ex husband’s new relationship she sabotages; her only friend’s marriage she ends by confessing the affair. On Christmas Eve, she harangues her mother into having a stroke, then accuses her of faking a coma, which immediately proves fatal. Finally Michèle plans a visit to her father in prison, where he is serving consecutive life sentences, and arrives to find that when he heard his daughter was coming, he hung himself. “I killed you,” she whispers, delighted, to his corpse in the morgue. It is the first time she has seen him in almost a lifetime. One night, when she was a child, he suddenly murdered every other child in the neighbourhood, and when the police arrived they found her half-dressed and covered in ash, having helped Papa burn the evidence – of what, Michèle couldn’t have known. Or could she? She has kept Papa’s name.

Leblanc, Michèle Leblanc. “A new type of woman,” Huppert has said of Michèle, a woman who neither capitulates to or competes with men, yet who rises where the men around her have failed, becoming “the protector of that new era”. That is, the era in which men don’t protect you anymore, like Jenny Holzer said. It is not new to Michèle, who, because of the murders, has never been able to call a father or a policeman for help.

“Shame,” says Michèle, “is not a strong enough emotion to stop us doing anything at all.” Yet if shame had no power, Michèle might not be so intent on stopping anyone who makes her ashamed.

The rapist dies too, not because he is a rapist but because he is a family man. He is in fact the handsome married neighbour Michèle has been attempting to seduce, so when on his third visit she unmasks him, she waives her revenge. She keeps the window open, colluding in her own, repeated rape. Or is it rape? For him it cannot be sex. Only when she sees that he hates her for the child she was, that he desperately needs her to feel shame, does she realise she has to put a stop to it. For her, there can be no one left alive who thinks she is her father’s daughter.

But then she is. Again the rapist and neighbour comes in through the window, and this time she fights, knowing that her son is in her apartment, that he will kill the “stranger” innocently, in her defence. She sets up her child, the way she as a child was set up, to do something unforgivable given the truth. Only the cat knows the truth. As Derrida once said of Anna Freud, why must a daughter be called her father’s Antigone? Why can’t there be an Oedipus’s Oedipus?

SARAH NICOLE PRICKETT is a writer and the editor of Adult Magazine. She lives in New York.