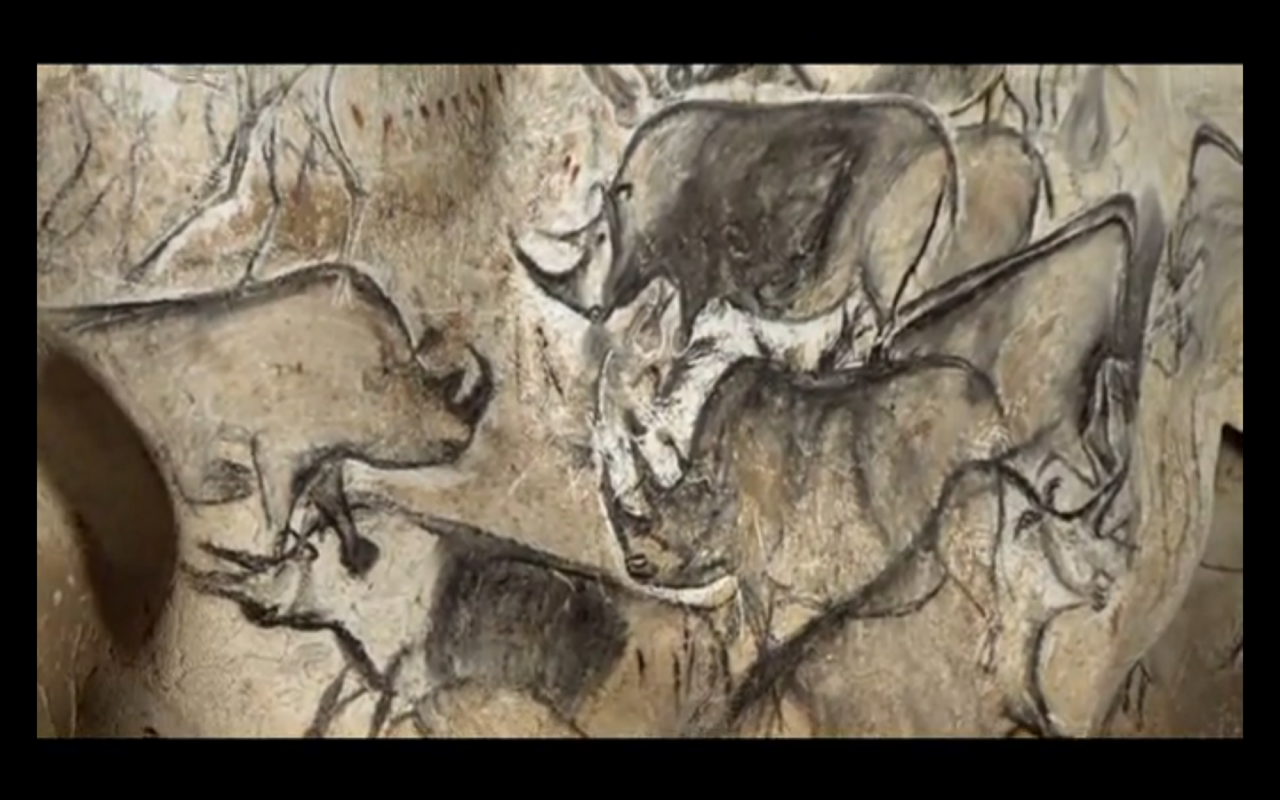 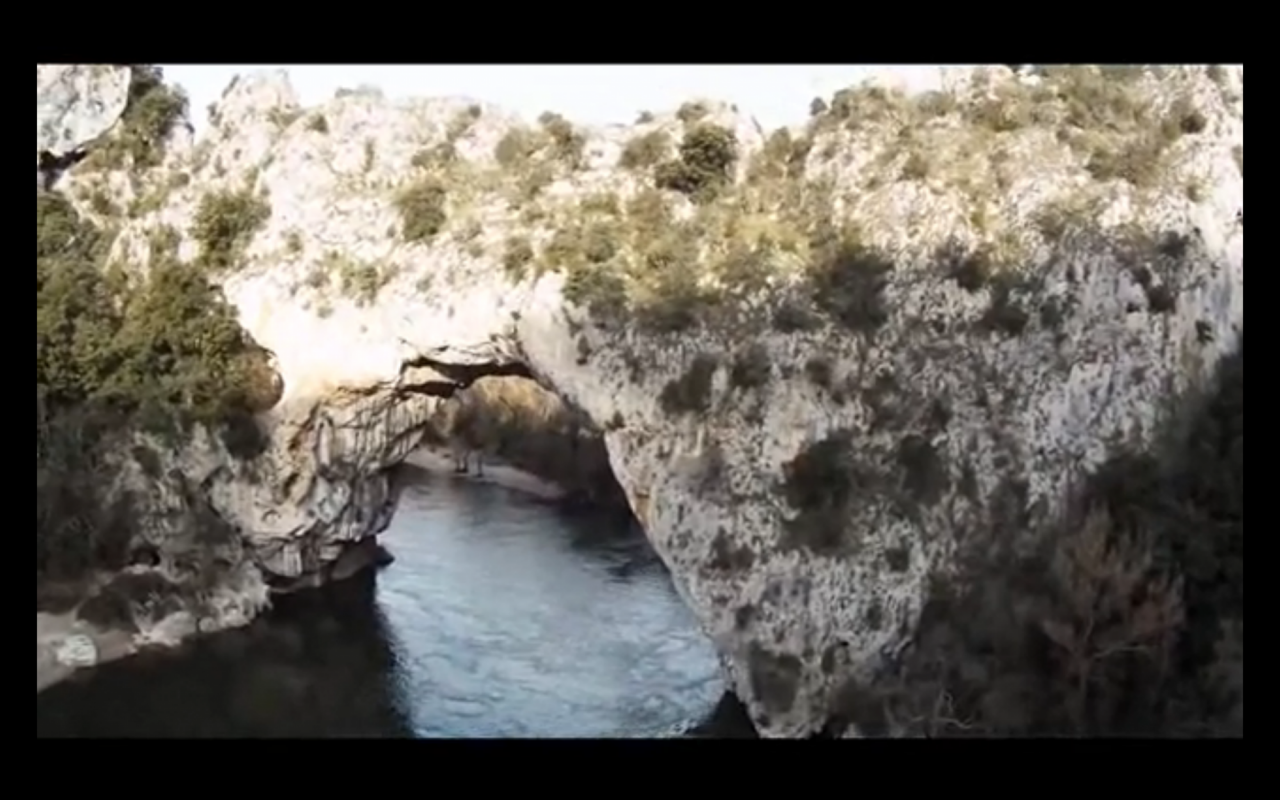 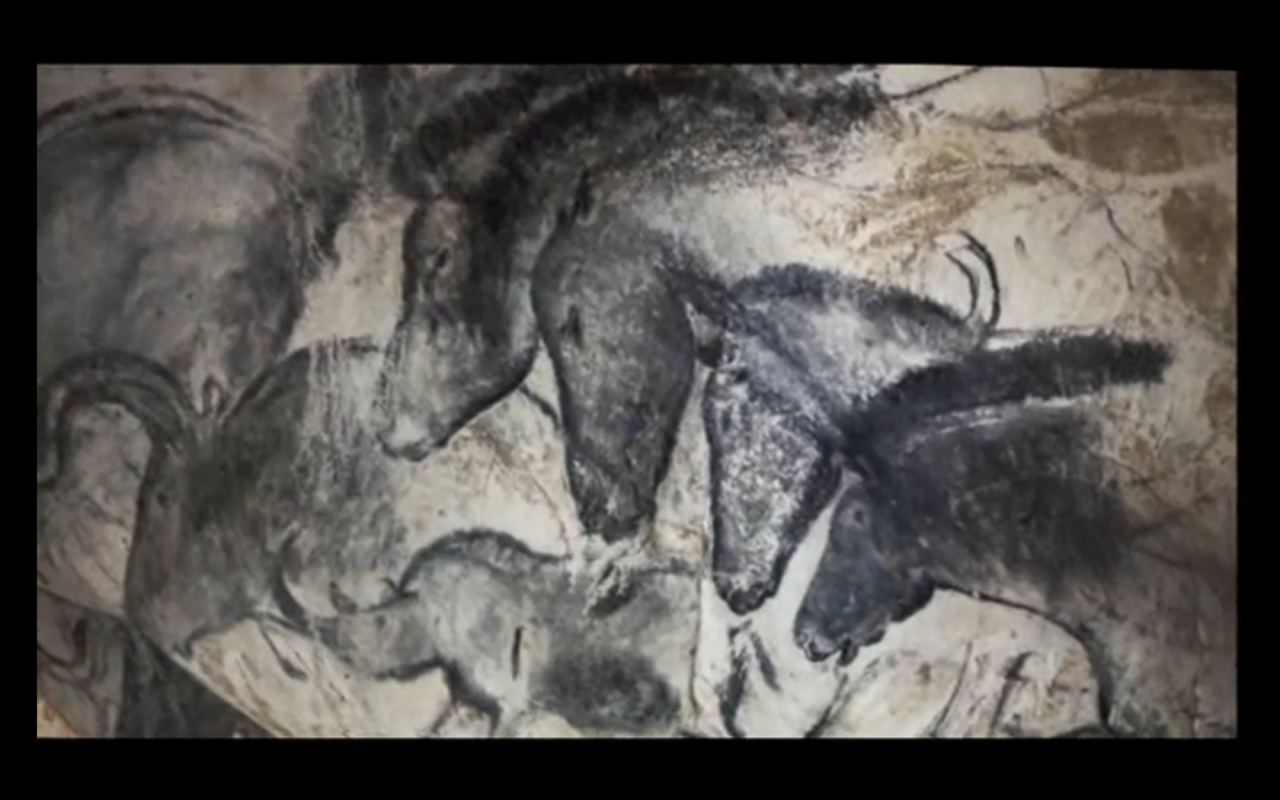 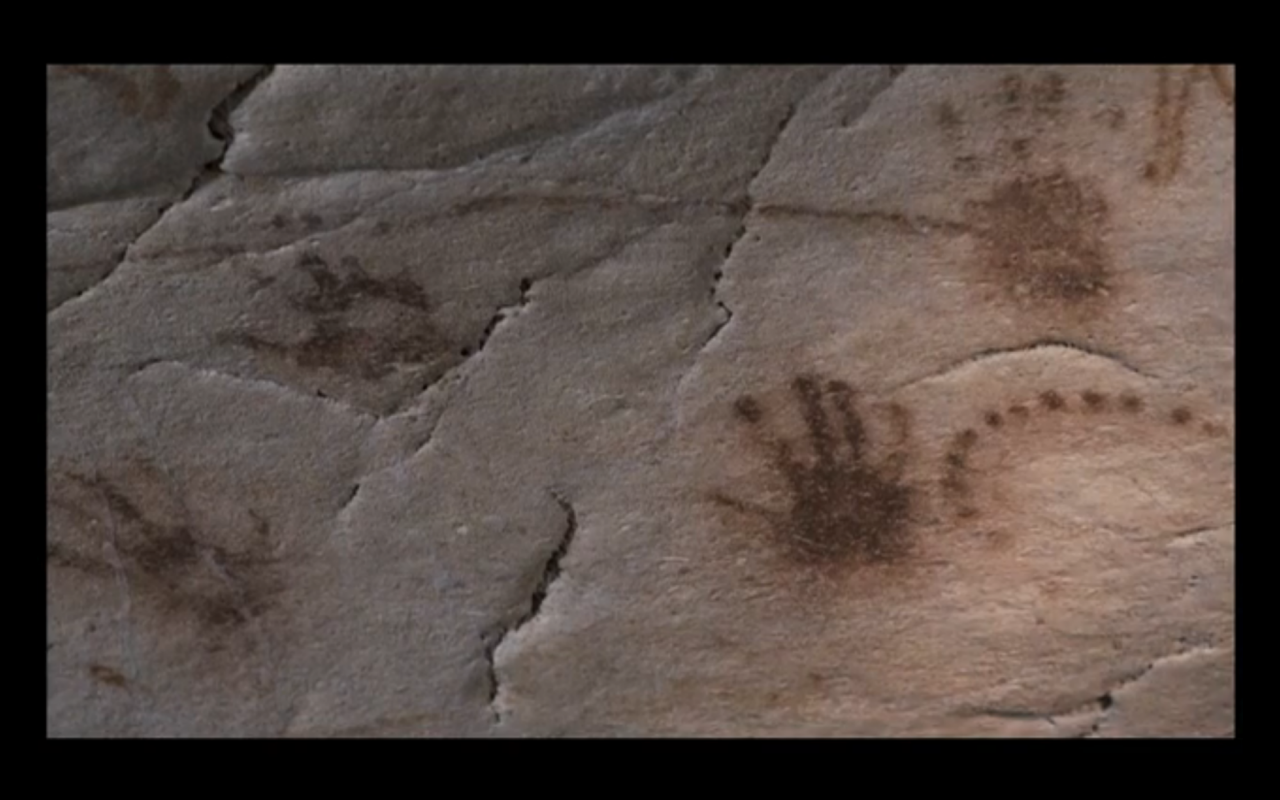 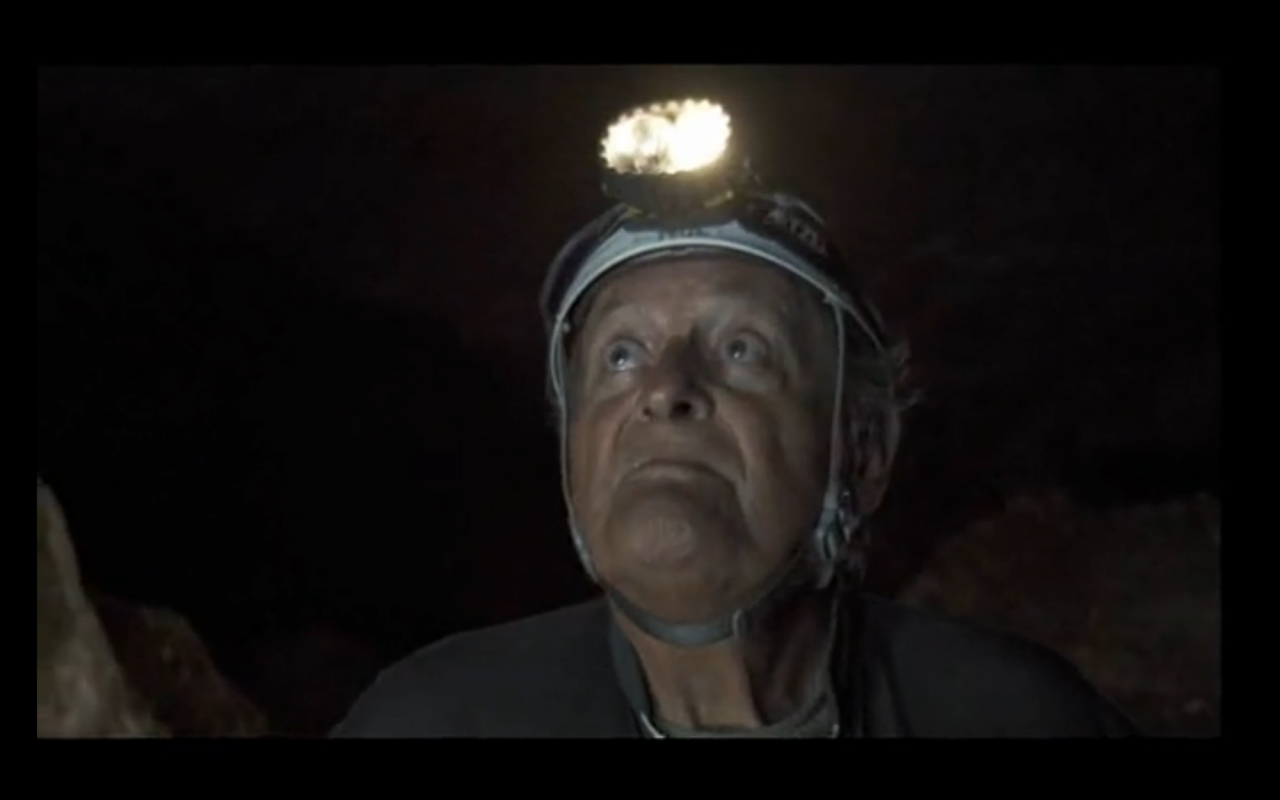 In 2010, Werner Herzog was among the lucky few to be given permission to enter the recently rediscovered Chauvet Cave in the south of France. In just six days he made a stunning documentary film about its 32,000-year-old cave paintings. Timo Feldhaus looks back at the beginnings of art through a flat Retina Display and soon drifts back to the present – to the image archives of Corbis.

Twenty-six thousand years ago a barefoot boy was walking through the Chauvet Cave. He was around eight years old and was carrying a torch, which he beat against the wall from time to time to make it burn more brightly. He may even have had a wolf with him, as there are wolf tracks accompanying his footprints. What was the boy thinking? Was he thinking of the distant future? Were the cave paintings surrounding him intended to establish contact with spirits? Are we, perhaps, ourselves those spirits?

Illuminated by my iPad screen, I am watching the documentary Cave of Forgotten Dreams, which Werner Herzog filmed in 2010 in the recently discovered Chauvet Cave with a bare-bones rig (the four-person crew was only allowed into the cave on six days, for four hours a day). I am seeing what the boy saw: horses, aurochs, caribou, a pride of maneless lions, bears, ibexes, giant elk, mammoths, horned owls, and panthers – the painters left out only human beings, who feature only in a few hybrid creatures. Why, just under thirtyfive thousand years ago, a short while after Cro-Magnon man had come into existence, didn’t they think about themselves as they painted these incredibly modern-looking pictures on the walls of the dark cave? How come the painters – one of whom, archaeologists say, was 1.8 metres tall and had a slightly bent little finger – didn’t have a bigger desire for self-representation? That is what we contemporaries of the selfie start thinking fifteen minutes into this film, which lets us see an inaccessible point of origin of human cultural history as if we were walking through the cave ourselves. But that’s not all; the main impression one gets is of the surreal expanse of millennia, the span of ungraspable time itself traversing the gap between the Retina Display, the images flickering on it, and one’s own brain.

Almost ten thousand years already lie between the painter and the boy. And then of course there are the people in the film who make it so incredibly beautiful. The scientists, with their childlike enthusiasm, dignified expertise, and elfin concentration, seem like workers from a remote age, pursuing an entirely new archaeology. At one point Herzog has two earnest researchers stand right in front of the cave paintings holding a photograph of them. This is about as far from sense as it’s possible to get and at the same time it’s fascinating in a mysterious and peculiar way. Herzog, too, is quite something, of course: later he sits opposite a scientist who is entering the exact measurements of the cave into a computer and explaining how they are making a virtual replica that will be precise down to the millimetre. In his unmistakable voice, the German director comments:

It is like you are creating the telephone directory of Manhattan: four million precise entries – but do they dream? Do they cry at night? What are their hopes?

Four years after it was originally released, the film has come up again because an Australian-Indonesian team of researchers recently found some drawings on the island of Sulawesi that prove that people were painting in caves at the same time on the other side of the world. This means that the beginning of art history is for the first time no longer a European phenomenon but a global one. But even without that discovery, the film remains a unique event: in the light of the lamps Herzog discovers nothing less than the original cinema of humanity. This even becomes plausible when you see the animal forms skilfully painted over one another to look as if they are moving: in an astonishing way, the cave painters seem already to foreshadow the medium of moving images. Seeking out “ecstatic truth,” as Herzog once put it, has always interested the director more than representations of reality. And his documentary films have always also been fictions, in which he appears as a performer. In them, you can watch the truth being made.

Some twenty-five years ago, Bill Gates already grasped what it meant to store, edit, and send photographs digitally. He came up with the charming idea of making images available for a small licensing fee. In place of a frame with a single picture inside, the plan was that people would hang monitors on their walls bearing images that could be changed at will per mouseclick; it would become possible to adjust the atmosphere of each room individually. He himself apparently chooses a new picture, week-in week-out, for each of the more than thirty monitors in his house; his favourites are said to be photographs of old movie stars. Unfortunately, this idea with the frame didn’t ever become anything like the hit that the photo archive did. In 1989 Gates founded the company that would become famous under the name Corbis in the mid-90s; today it has more than a hundred million images and is the largest photo agency in the world.

Gates, who in 2013 once again became the richest man in the world, thus also made a huge contribution to the spread of stock photography. The digital watermark, whose presence has become a meme in post-Internet art, went viral in large part thanks to Corbis. It’s also interesting that one of the agency’s physical archives is hidden from view, secured in an old mine seventy metres below ground. It’s the place the original photographs are kept, and it’s only there that they’ll survive over the long term (it is said they can be stored there for five thousand years without decaying). The repository of our cultural memory, which for the past few years has functioned primarily through photographs, is thus itself back in a hermetically sealed space in a dark cave. And that surely gives Horst Bredekamp a lot to smile about. For years, the visual theorist has been working on “unraveling the categorical blunder of Western philosophy”, based on the premise that rather than being associated with a Platonic structure of deceit, caves actually made a contribution to civilisation’s capacity for making worlds.

This can sometimes lead to desperation as well. Is the story of the evolution of art not simply a web of lies in the presence of these Stone Age paintings? Corbis used to be called Continuum Productions, a choice that implies a faith in continuity on Gates’s part that hardly seems tenable. It seems more as if art came into the world like a foal that could stand on its own legs from birth. I close the YouTube window and bring up something else, putting together a little knowledge with every swipe, a little cultural refinement. Have our eyes changed? Our gazes? The pictures we see have not. They have stayed the same. Only the frame is different. Wikipedia, the Guardian, click, click. The writer and art critic John Berger got permission to visit the caves even before Herzog. He writes: “Cro-Magnon painting did not respect borders. It flows where it has to, deposits, overlaps, submerges images already there, and it continually changes the scale of what it carries.” And he also describes the limits of our ancestors’ consciousness: “The nomads were acutely aware of being a minority overwhelmingly outnumbered by animals. They had been born, not on to a planet, but into animal life. They were not animal keepers: animals were the keepers of the world and of the universe around them, which never stopped. Beyond every horizon were more animals.” These new human beings knew how to make fire, but they were a long way away from feeling like they were the crown of creation.

The cave painters saw themselves as a small part of the world that surrounded them, while we, for at least the past hundred and fifty years, can be considered its destroyers. Did their consciousness perhaps start to crackle and pop when they placed their own marks on the cave walls? These companions of the darkness placed their hands on the stone and blew pigments over it. It’s possible, in fact, that they did this as a way of developing something like an individual style – not for the sake of depicting their surroundings or a virtual world but rather to make their work recognisable.

At the end of the film, Herzog gets sidetracked by a nuclear power station near the cave, in that inimitable and unrivalled way of his. Its cooling pool is now part of a tropical biosphere in which hundreds of crocodiles are swimming, including mutant albinos. “Are we today the crocodiles who look back into the abyss of time when we see the paintings of Chauvet Cave?” he asks in voiceover. Silence. What would be the right answer to this question? The Corbis cave is a former mine north of Pittsburgh, far from the noise of the earth. In the surrounding forests are wild turkeys, bears and groundhogs.

Timo Feldhaus is an editor at Spike and lives in Berlin.