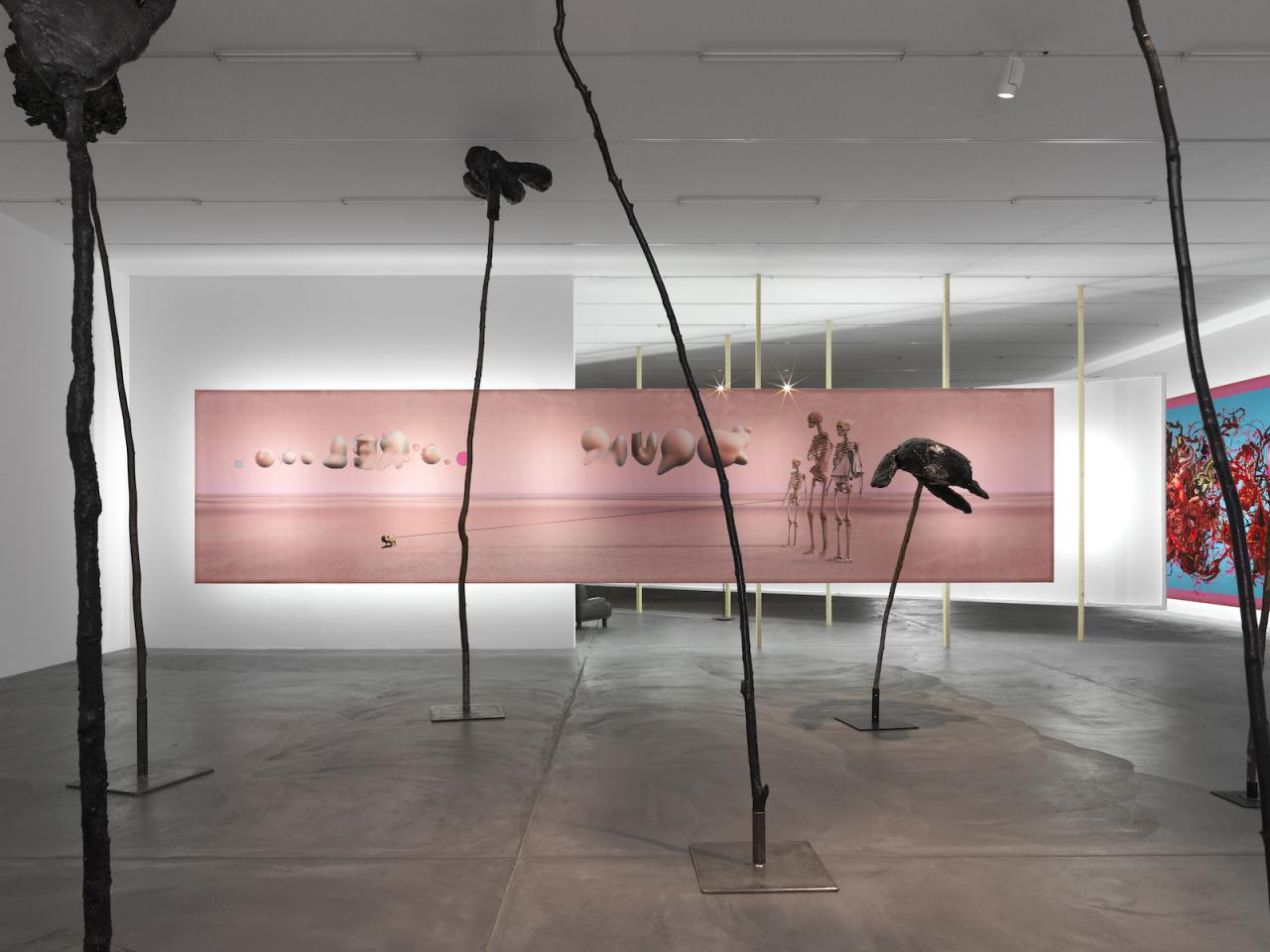 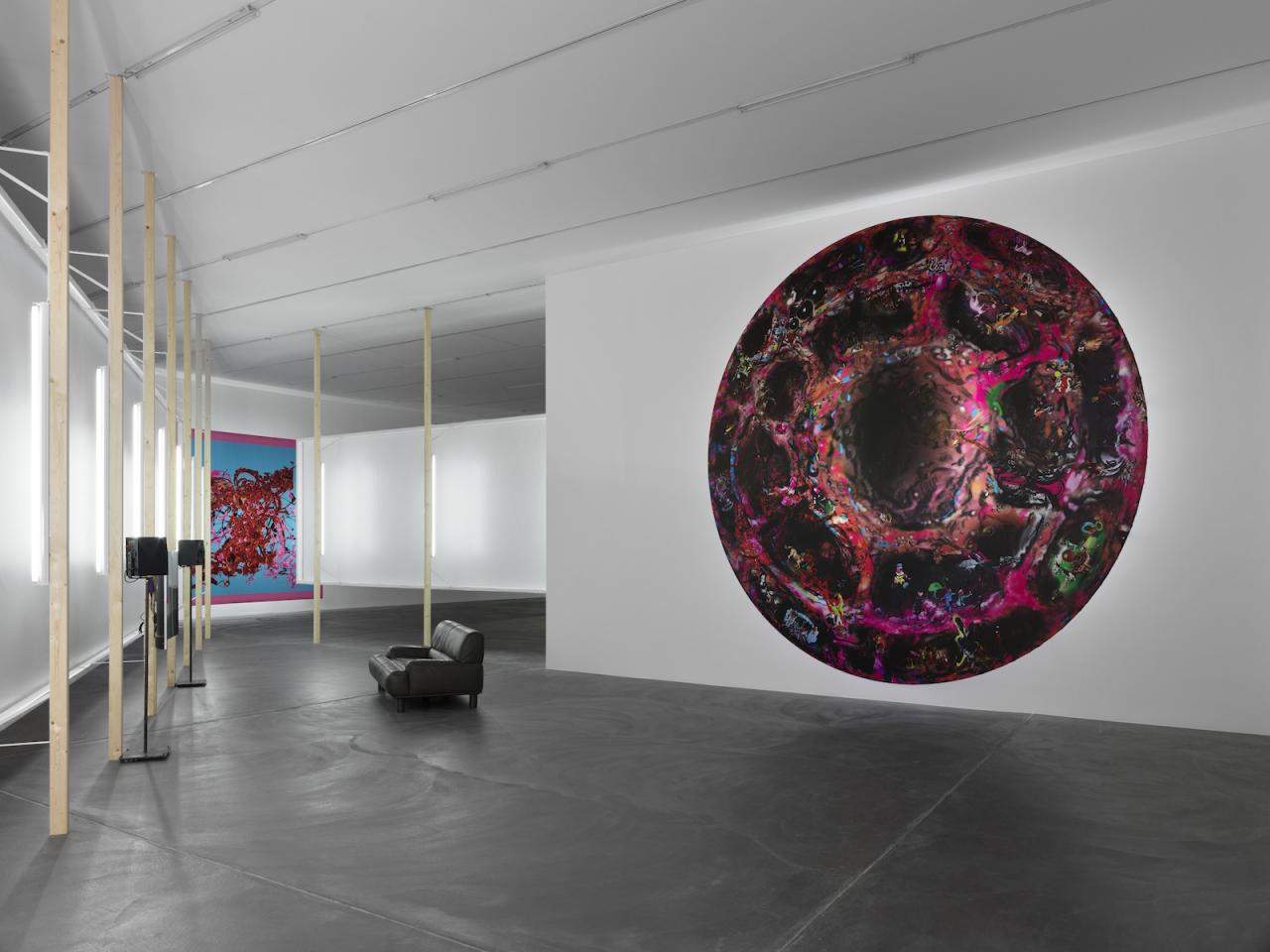 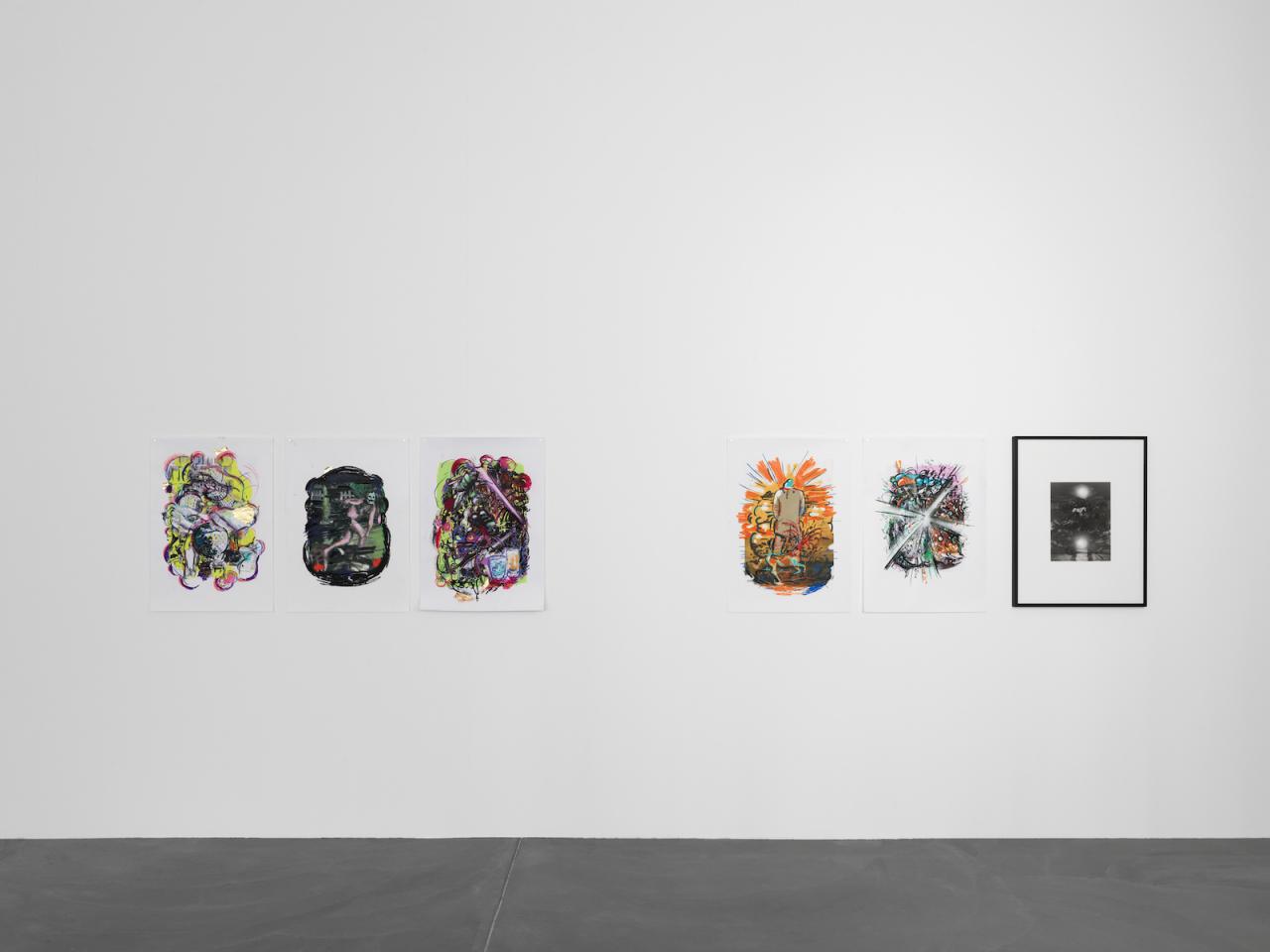 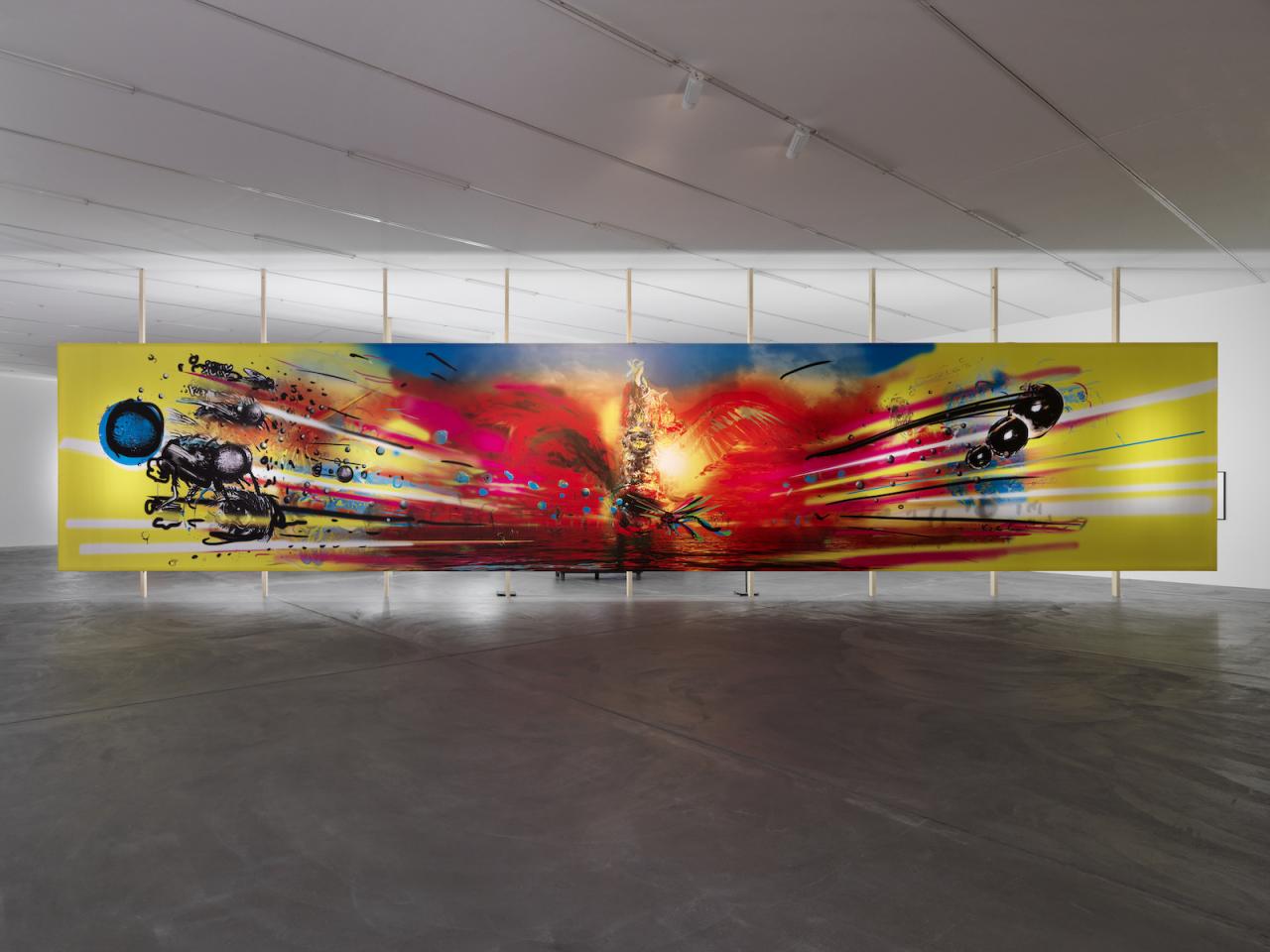 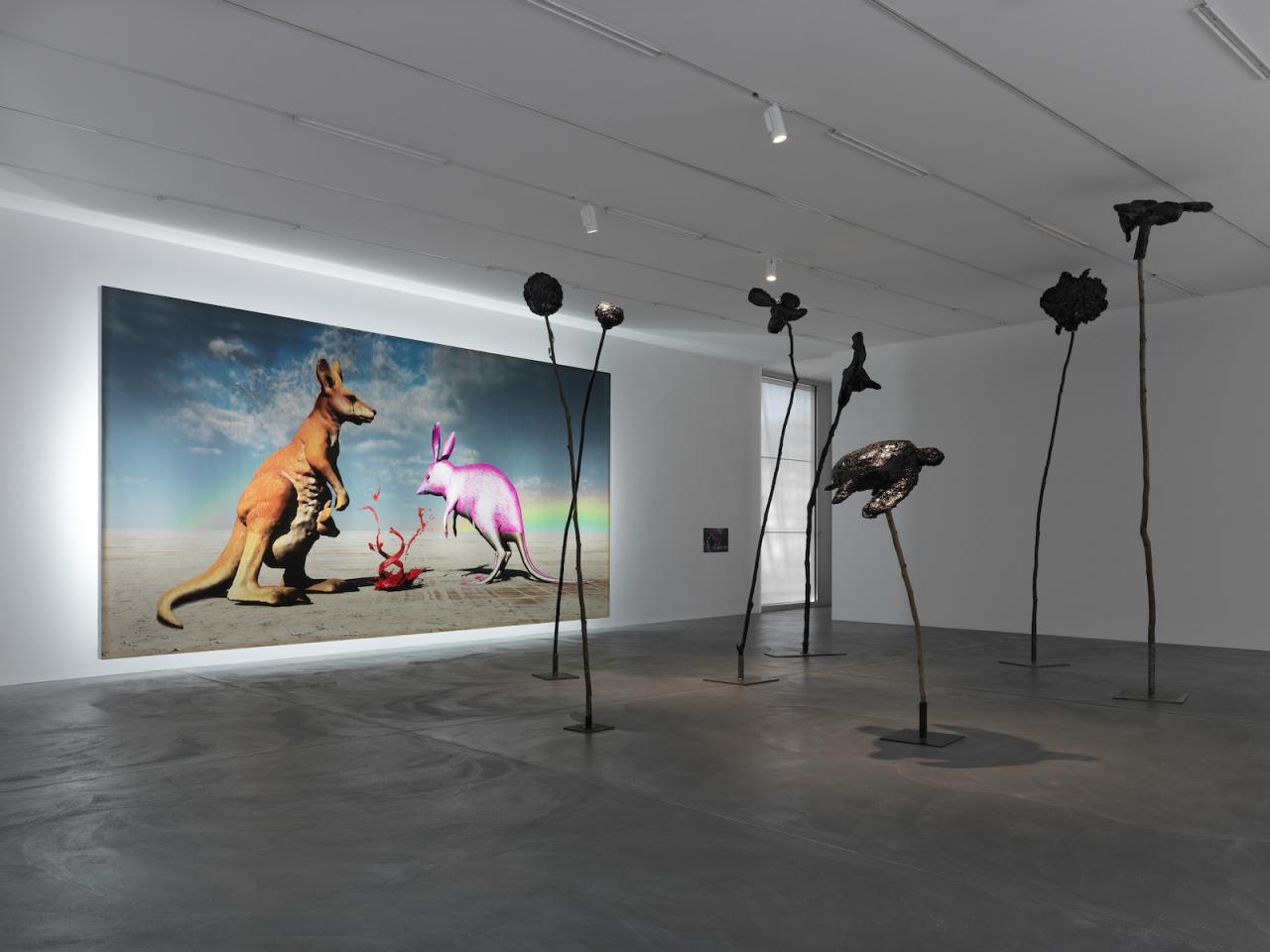 Head, which is less like seeing the world through someone else’s eyes than it is like having someone else’s head transplanted onto yours, was an excellent primer for Russell’s recent exhibition “DOGGO”. On the internet, doggo refers to a meme in which dogs are anthropomorphised. The word is thus symptomatic of the conflicted relationship between the image and our emotional life, which can be seen as either the text or the image that is overwritten by a text or image counterpart. When (images of) dogs are used to represent human feelings, Photoshop is where one can transplant a dog’s head onto one’s body: the site of becoming-dog. But how does the viewer, as a dog, confront a mouse confronting a kangaroo in the desert (in Russell’s Judgement. The kangaroo is not happy. It’s not clear who or what it represents but it’s not in a good place [2014])?

The images gathered together in "DOGGO” don’t attempt to visually translate one’s inner landscape, but show us a strange world that requires an altered perception – something that can perhaps be taken as given in an age as delirious as ours. In Ocean Pose [Pink] (2008), a unicorn is entangled in a Gordian knot composed of octopuses in post-coital (tentacle-rape) daze. In Midnight Ecstasy (2014), a post-nuclear skeleton family is taking a non-skeleton dog for a walk and projecting opaque speech-bubble clouds over the desert. The Philosophy Is in the Meat (2005) looks as if a clone of Jackson Pollock had painted his biggest painting with the human remains of a car crash. In Those were insects that were their eyes II (2017), a Turner seascape is haunted by a huge totemic eyeball with an angel’s wings, while gargantuan flies hover over a triple crucifixion. If the memeplex we inhabit demands iconographical restructuring, is Jesus Christ the original meme?

These radically oversized, train-carriage-format paintings render an obsolete iconography in a zombified ghost train travelling through one’s head. Their scale is deceptive, as the works hinge on a cheap economy: they are printed on the type of commercial PVC that is used for advertisements. They’re a throwaway product, cheaper to reprint from a weighty Photoshop file than stored. Nevertheless, that they are backlit with fluorescent tubes lends them an aura that burns widescreen experience even into the fleeting angles of eyeballs.

The show also included a dozen odd abject sculptures that resemble turtles, birds or even heads mounted on stilts in an etching by Francisco de Goya. Covered in glossy black tar, they have seemingly leaked from the surface of the scenarios in the billboard-size works – the perception of which they interfered with, as their thin pedestals created a flickering when one walked through the space. Their loose arrangement in a circle hovering above one’s head also evoked the confusion of a cartoon character that has been hit with an oversized hammer, and/or the circling of vultures over humans praying to the oil god. Yet finding oneself within the confines of this sacrificial Stonehenge refuted the idea that the experience of image-watching is one of loss. Instead it appeared as if these images communicate too much.

Becoming-dog is the only way to understand the language they speak. A rapid multiplication of images throughout the 2000s produced a folklore that the image as such doesn’t contain anything, that it only refers to itself and its image status, that meaning is as slippery as the tides of capital it rides on. Artists such as Wade Guyton and Seth Price explored and exploited the glitch, punched digital holes through mutilated bodies and let the printer run on empty, as if there was nothing left to say. The post–Kai Althoff moment insisted on the internal landscape as the site for meaning, endlessly repeating worn-out psychedelic-fantasy tropes while individuals drifted apart, though they remained connected more than ever: I feel [dog head]. Do you wanna [dog head]? I can’t believe you [dog head] me. And as we become unable to read a [human head], images are creating trauma and uproar, electing heads of state and erecting walls in the Saint Louis Art Museum and on the southern US border.

Russell’s images always operate with double manoeuvres. While appearing as archetypes of easily digestible art images, they complicate viewer-image relationships ad nauseam. They orchestrate slippages of meaning in a spiral of abjection and estrangement. Amidst the widescreen brain pollution that was the rest of the exhibition hung Foxhunt (2017), a small and unaltered photograph depicting the red-garbed horse-riding aristo-class en route to the hunt, surrounded by a flock of dogs. Seemingly anachronistic in medium, it addressed the ele- phant in the room: the relationship between images and class.

Direct in its representation, traditional in its subject matter, it is a tasteful image and thus functioned here as a division line. Without apparent complexity or interruption, it drew out the abject, unruly and contradictory nature of the images surrounding it. Emerging from the abyss of the ever-mutating memeplex but without the streamlining that would render them tasteful, these images, by contrast, refused to be governed. But if the viewer felt estranged from the poshos on their horses, doggos where there to help. The empathy one experienced towards sad kangaroos and maltreated unicorns revealed itself as a sense of being welcome. This is what it feels like to belong to a class of dogs.

TOBIAS MADISON is an artist based in Zurich and New York.

View of “DOGGO”
Background: Judgement. The kangaroo is not happy. it’s not clear who or what it represents but it’s not in a good place (2014)
Backlit digital print on vinyl, 400 x 786 cm
Photo: Annik Wetter