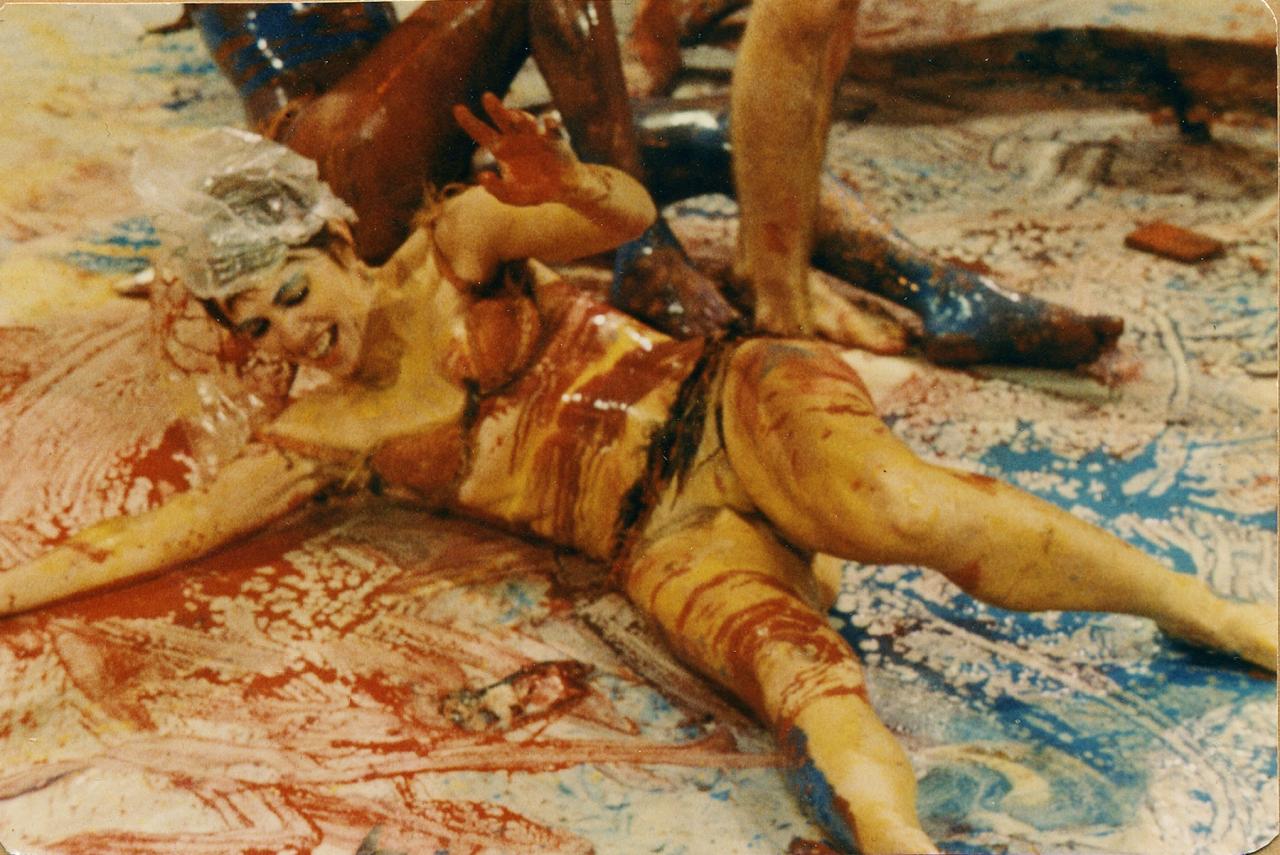 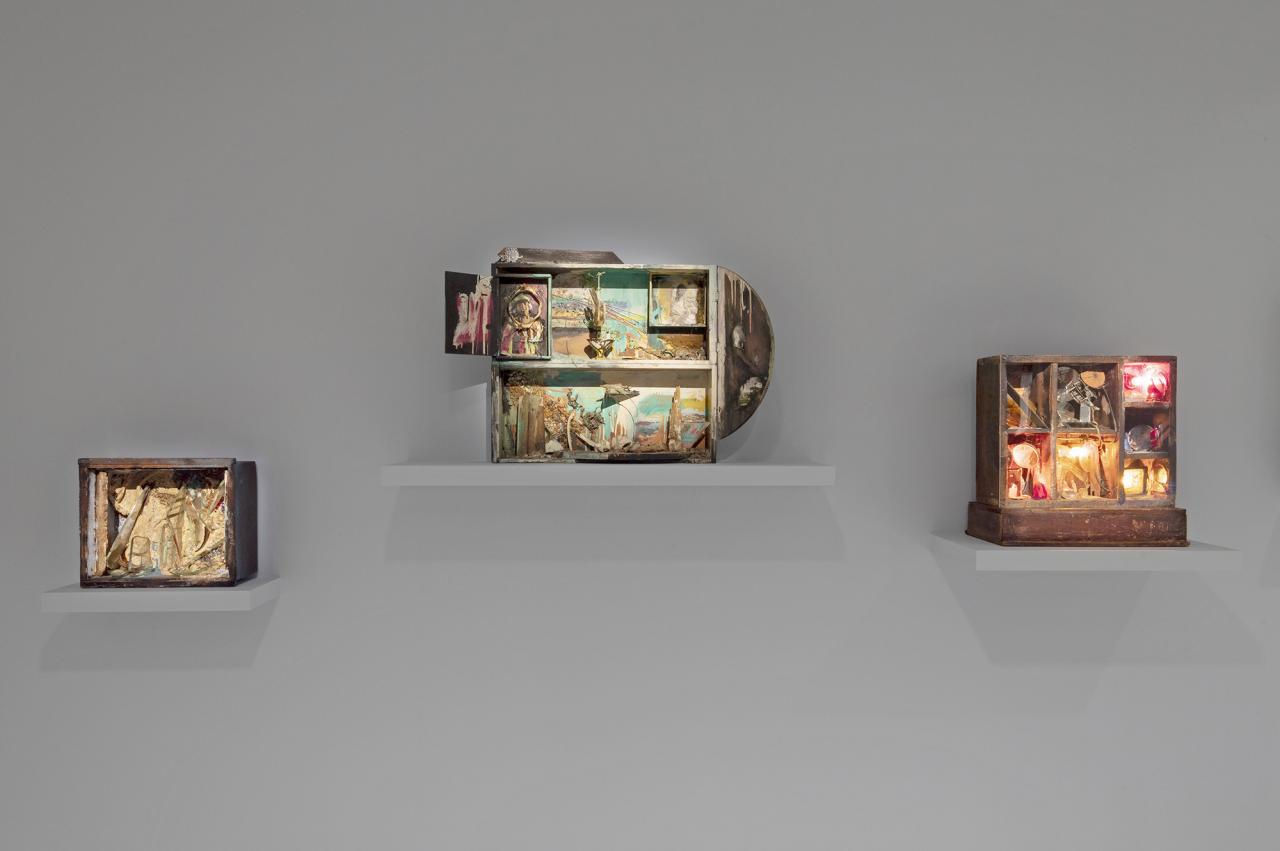 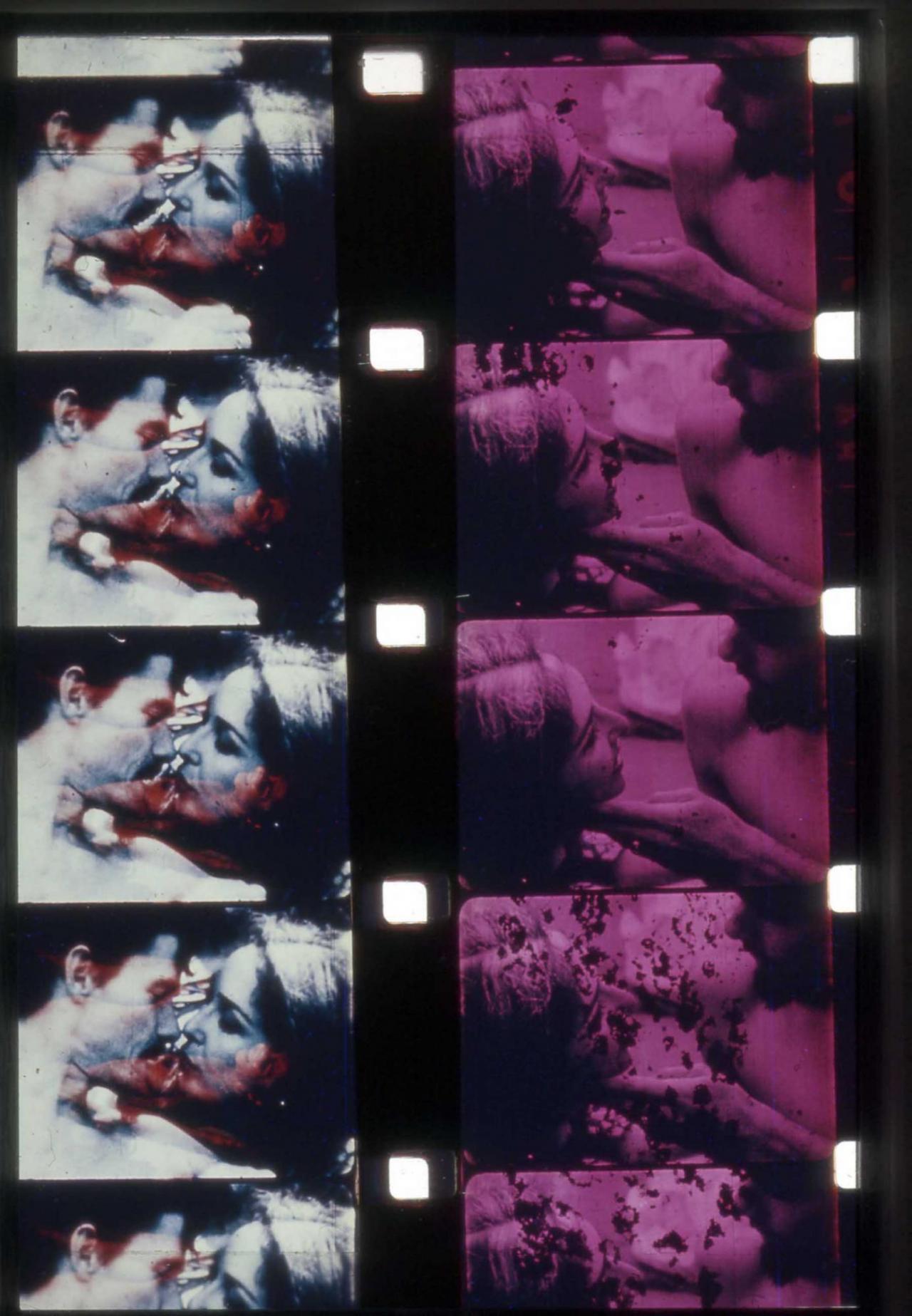 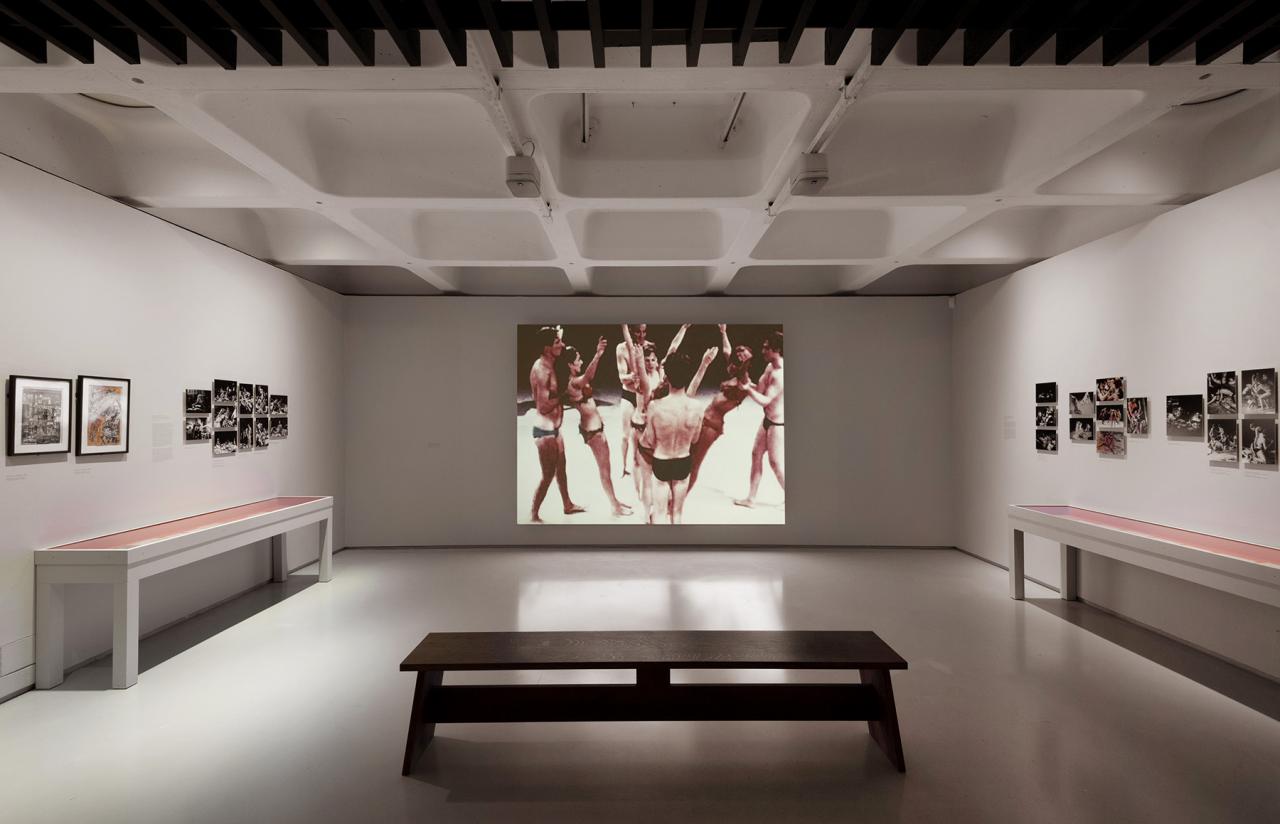 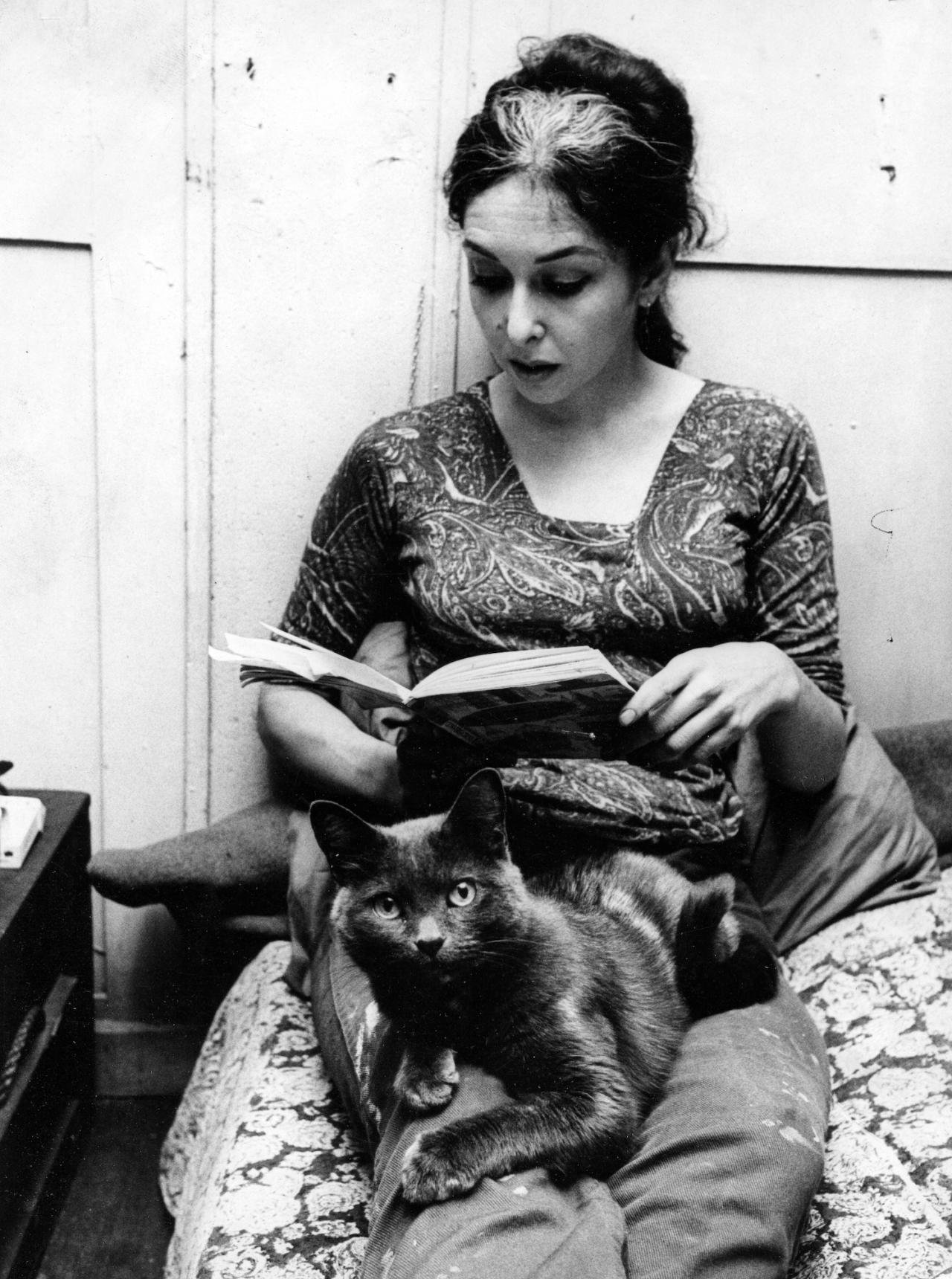 Carolee Schneemann created work as if accessing an inflammable power – pleasure wrested from suppressive taboos, the body of the artist calling the social body into question. The Barbican in London organized an extensive retrospective of on oeuvre spanning over sixty years.

That the word “lick” tells of the movement of fire and the application of paint feels fitting for Carolee Schneemann (1939–2019). The word has both a dancing elegance in these contexts and a viscous, textured sensuality, as a favored action of the human tongue. Among the many vehicles Schneemann used in her art, flames, pigments, and the body worked in a symbiosis of destruction and creation.

Burning, as a mode of annihilation, as an energy source, is materially and figuratively expressed throughout the US-American artist’s current retrospective at the Barbican in London . In a more literal sense, Schneemann lit her fires in wooden boxes filled with glass shards, mirror fragments, paint splatters, and chemical spirits. Twisted trinket boxes, or torture chambers perhaps. Controlled Burning (1963–64) was both the series title of these assemblage boxes and their method of creation, as the artist set their contents alight, shut the lid, and waited to see what happened. Elsewhere, her staunchly feminist, vibrantly kinetic oeuvre has the quality of fire in all its transformative ferocity. Burning as eroticism, burning as love – her work is as all-consuming as a ball of flame.

The exhibition follows Schneemann’s art chronologically, beginning with canvases of swirling figures in bright, sometimes muddled colors. Even in her earliest static paintings, movement is a key facet. I arrive two minutes before Pin Wheel (1957), an oil painting mounted on a potter’s wheel, is due to be “activated,” or spun by a gallery assistant. Nearby, the sculpture Fur Wheel (1962) rotates on its axis, a lampshade covered in fur and hung with tinkling tin cans like Christmas ornaments; the burnt box constructions follow as symbols of past action and movement. Everywhere you look, there is color and texture.

The work in her next artistic phase feels most alive in a space where photography, crafting, and filmmaking are displayed together, with a clear sense of the sheer speed of her ideas and production during the early 1960s. As a founding member of the Judson Dance Theater in New York, a group of avant-garde practitioners engaged with experimental dance concepts, her interest in unrestricted movement and improvisation – that quality of waiting to see what happens again – found a dynamic and natural transition from paintings to dance. Schneemann described the group performance project Meat Joy (1964) as an “exuberant sensory celebration of the flesh,” and its unraveling in the show through rehearsal and set photography, collage, sketches, and filmic performance documentation, is itself thrillingly immersive. Dancers frolic and thrash across the floor en masse, lightly dressed in fur underwear, limbs tangled and bodies merged. Then come the hotdogs, the raw fish and chickens, thrown into the gladiatorial arena for their bacchanalian pleasure.

Meat Joy was an adamantly alive, in-the-moment performance captured on film, but it still feels vivacious within the confines of the frame. Whatever she found in 16mm, it encapsulated enough of her interest to become a regular element of her practice. Between 1964 and 1967, Schneemann made Fuses, an erotic and liberatory home movie that recorded her and her then-partner, James Tenney, having sex. The footage is grainy and marked with scratches and blurs, evidence of more of Schneemann’s controlled burning – the reel was doused in paint and acid, cooked in the oven, and left out in the rain. It is also a kaleidoscope of tones, hues, layered images, and corporeal being that expresses Schneemann’s total control over her own body and sexual expression. The film cuts between medium shots of the couple together and hazy, romantic double exposures with pace, offering chosen glimpses of her life’s intimacies. It’s a work that invites us in, holds us at a distance, and only welcomes gazing and desire on the artist’s exact terms.

Schneemann’s clearest preoccupation was her body. Using her own form as art itself was the key to unlocking expression and revelation.

Fuses marked the beginning of what would become an “Autobiographical Trilogy,” which continued with Plumb Line (1968–71) and Kitch’s Last Meal (1973–76). Fire makes a return in Plumb Line, a hallucinatory and dreamlike home movie that documents the end of a relationship concluding with Schneemann burning her own images in front of the camera. Elsewhere in the artist’s habitual explorations of her own life and presence, Body Collage (1967), depicts the artist slathering her body in wallpaper paste and papier mâché-ing herself with strips of paper, while Up to and Including Her Limits (1973–76) was a hybrid performance installation where Schneemann scrawled on canvas while swinging naked from a harness.

Schneemann’s clearest preoccupation was her body. Using her own form as art itself was the key to unlocking expression and revelation. It was also an explicitly political statement to be jubilantly flesh-focused as a woman of the 60s and 70s, to lay claim to her own body as a tool for art and selfhood rather than the demands of a patriarchal society. And confronting the expectations placed on women in all facets of life, before second-wave feminism truly took hold in the United States, turned her into a pivotal figure in the feminist art space. As Olivia Gauthier writes, Schneemann’s interest in “fire’s ability to act as both destroyer and producer [...] is not dissimilar from Schneemann’s use of her body to challenge fixed notions of the female nude, representing herself as both image and image-maker.” Using her body in the work had to be consuming to the point that it became an unquestionable truth – “I do not ‘show’ my naked body! I AM BEING MY BODY,” Schneemann once wrote to a friend.

What feels most special while walking around the Barbican is the outright sense of fun in her work: a woman photographed with a fish tail between her teeth; shots of Schneemann preparing to roller skate down a train carriage; the many, images of her cat, Kitch, who observed the artist’s work with peaceful curiosity. There is a potency – humorous, sensual, feminine, emancipated – that feels invigorating to become absorbed in, like finding yourself daring to embrace an inflammable power.

CAROLEE SCHNEEMANN’s (1939–2019) recent solo exhibitions include “Body Politics” at the Barbican Centre, London (2022–23); and “Carolee Schneemann: Kinetic Painting,” which debuted at the Museum der Moderne Salzburg in 2015 and travelled to the Museum für Moderne Kunst, Frankfurt am Main, Germany and MoMA PS1, New York, in 2017.

CAITLIN QUINLAN is a film critic and writer from London.