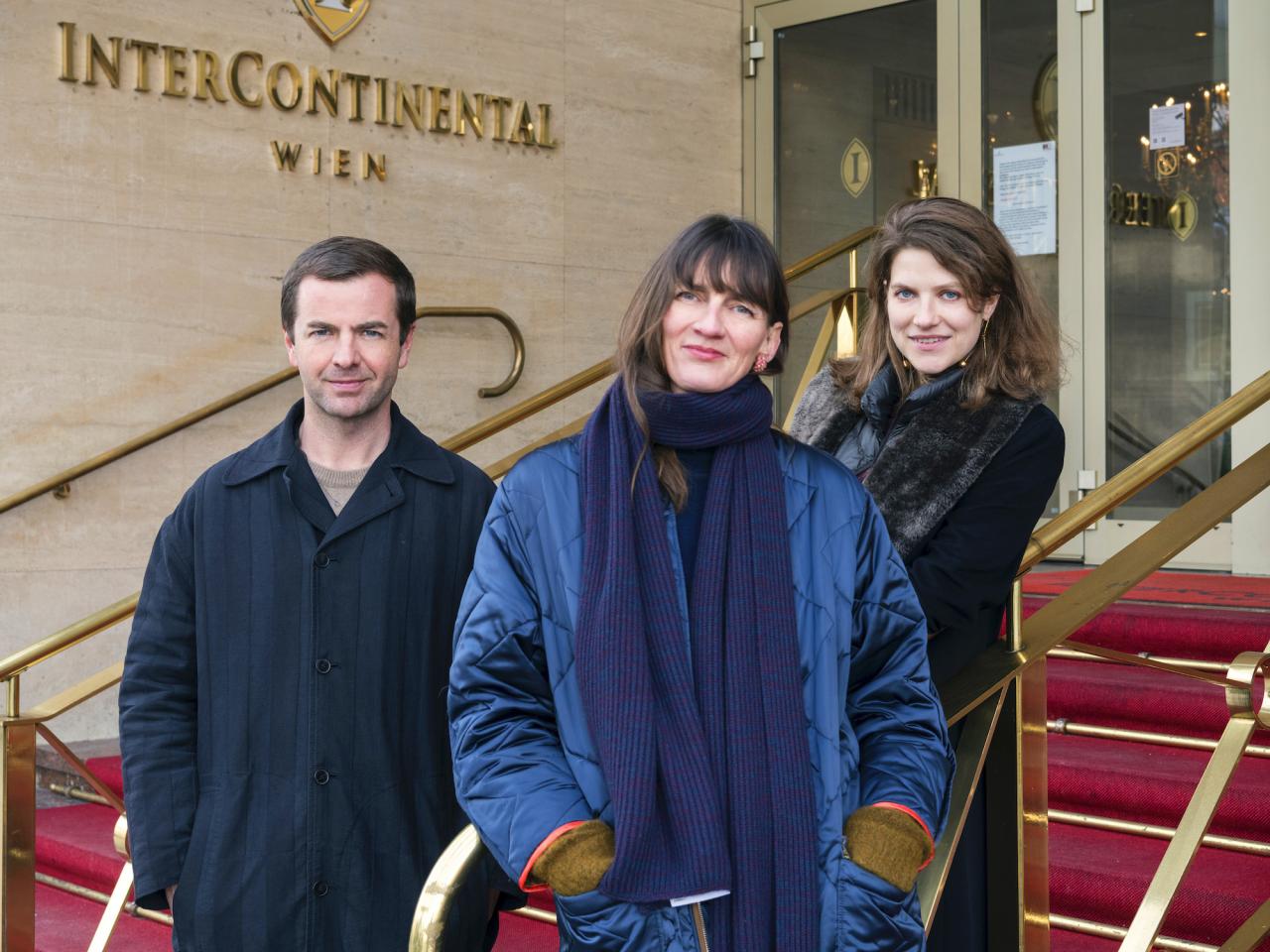 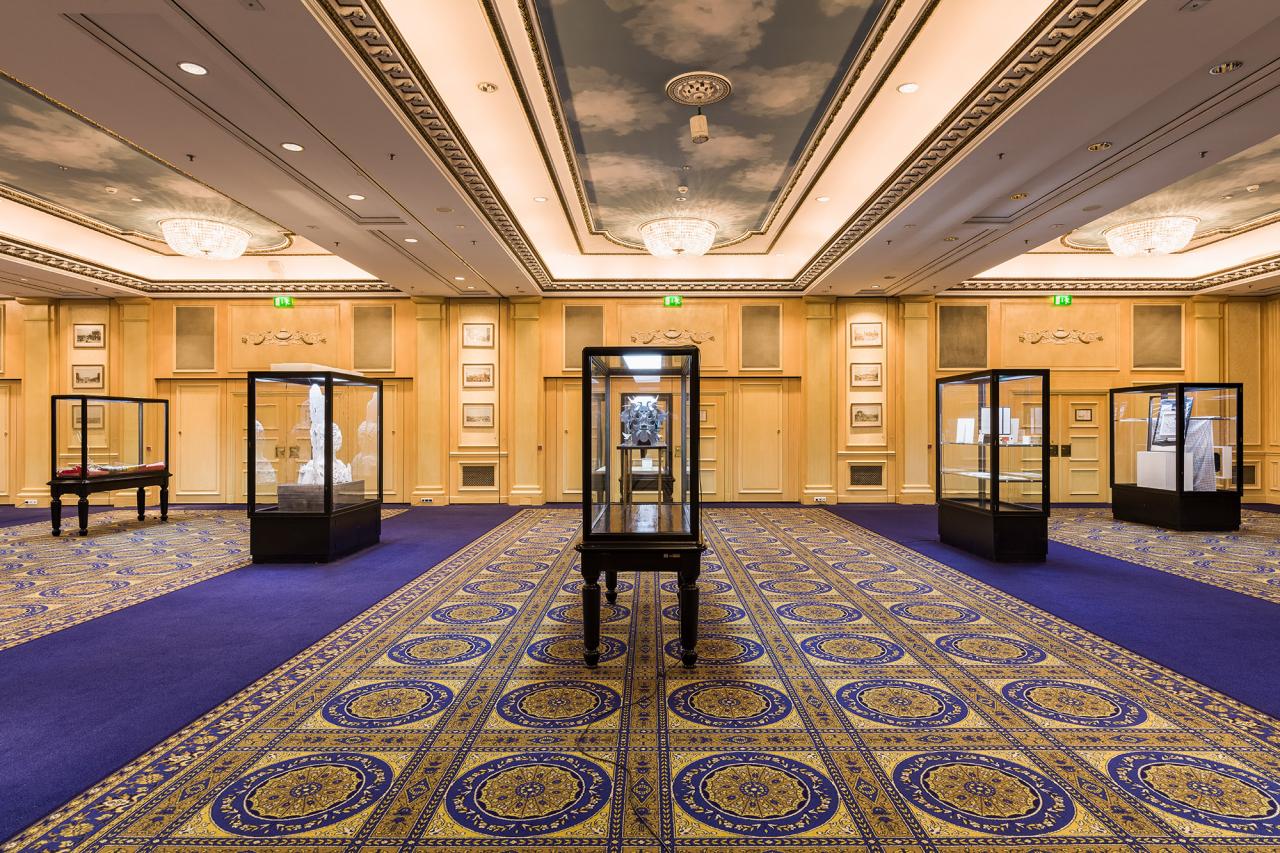 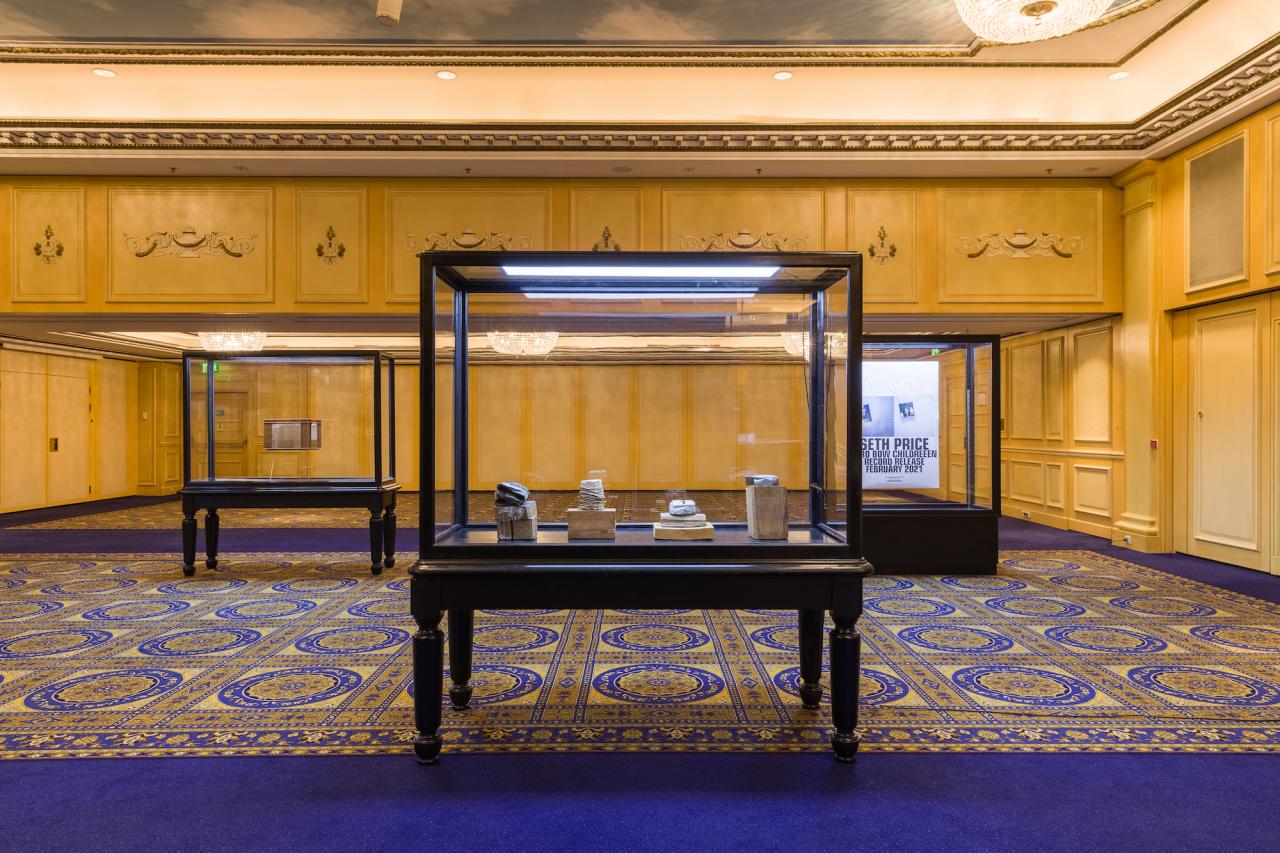 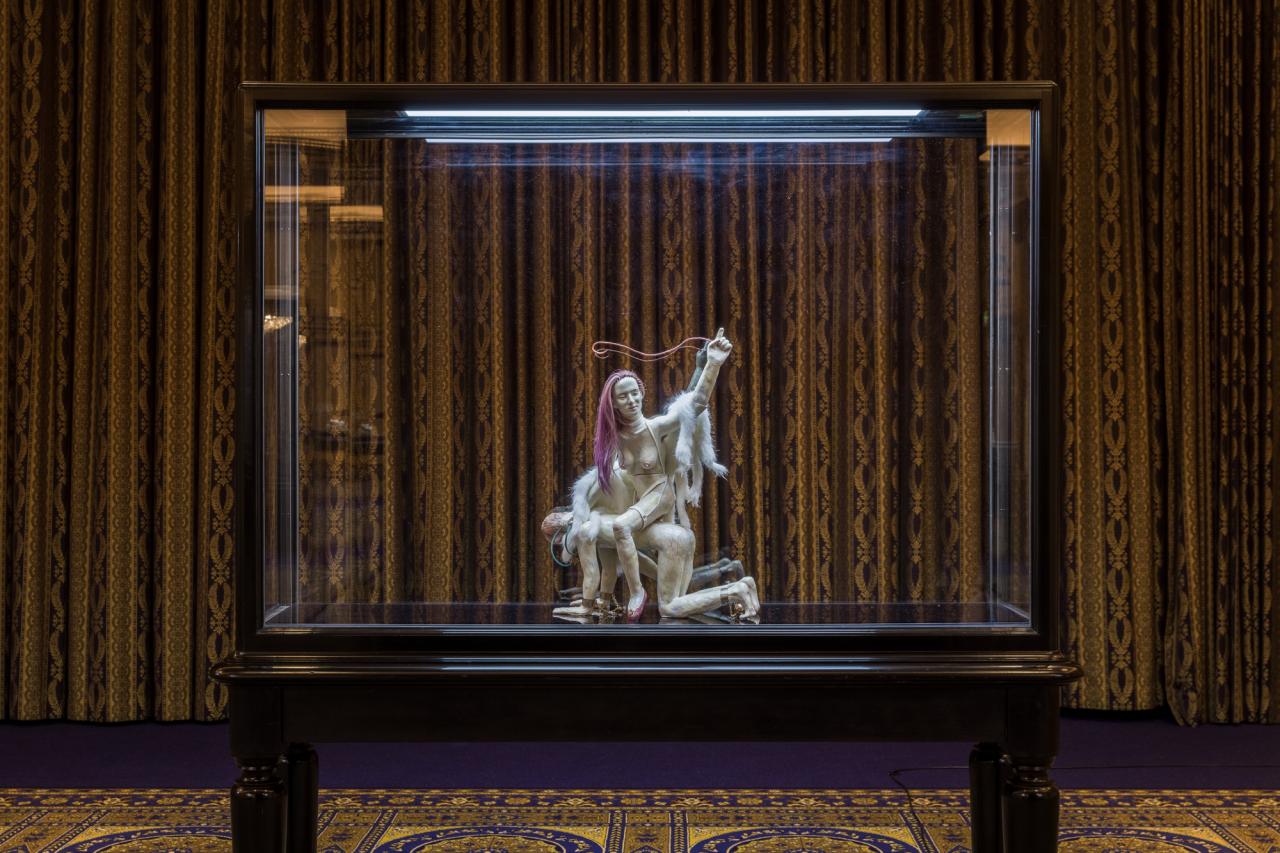 With the country still in lockdown, three Vienna galleries – Emanuel Layr, Croy Nielsen, and Sophie Tappeiner – came up with a new format for an art fair set in the conference halls of a popular hotel in the Austrian capital. Thirteen galleries are joining, and each gets to occupy one antique vitrine on loan from the Museum of Applied Arts. Visitors to the online channel are treated to virtual tours, all of which centre around both the established and the new in Vienna’s spirited art scene. Spike is the only non-gallery invited to participate, and we took the opportunity to ask the three organisers a few questions.

How did you come up with the idea of doing a “boutique fair”, and what characterises it from other ones?

INTERCONTI WIEN was born rather spontaneously out of the current situation. We were offered the possibility of doing something in the conference halls of Hotel InterContinental Vienna, as most of their conferences had been cancelled, and came up with a bit of an experiment. At first, we weren’t set on the idea of doing an actual fair, we just wanted to offer a meaningful initiative for galleries and artists alike. However, as galleries as well as artists are dependent on sales, calling it a fair and working along that logic, seemed most appropriate.

While one of our aims is to increase the visibility of Vienna’s art scene internationally, the project is actually small in size, featuring only thirteen galleries with each of them presenting one artist in a historical vitrine. The space didn’t really allow for more participants, but neither did our resources, as we only had a couple of months to plan. What characterises a “boutique” fair are qualities that are also essential to the identity of INTERCONTI WIEN: it is run independently, small in scale, and rather specific.

What is the impulse behind the fair, to showcase a new Vienna, a new Zeitgeist, a new sensibility, or something completely different?

Well, the whole project probably wouldn’t have come to life in the first place, if it weren’t for what you might refer to when you say “a new Vienna”: the fact is that a lot of new galleries have either opened in, or moved to, Vienna from elsewhere within the past few years, which has created a lot of new energy, along with a vast amount of non-profit and artist run spaces (many of which can be found on independentspaceindex.at). And in general, the city has experienced an influx of international creatives – artists who are coming to Vienna to study at one of the two great academies; writers such as Attilia Fattori Franchini, Francesca Gavin, and Max Feldman.

INTERCONTI WIEN does not offer a comprehensive view, but rather a glimpse of this new energy, and interestingly enough more than half of the exhibited artists are based here, so it also gives an idea of the current state of artistic practices in Vienna.

Is the fair a one-off project for this year, or should it become a regular fair in Vienna? If yes, that would mean there would be four art fairs in Vienna, including Vienna Contemporary, Parallel, and the new Spark Art Fair in May. Is that too many?

For many reasons INTERCONTI WIEN cannot really be compared to the fairs that you mention. First of all, the scale of the fair: each gallery occupies the limited space of a historical vitrine, contrary to the 20–40 square metres one normally occupies at a fair! One constraint was that the space ultimately couldn’t accommodate more galleries, nor were we capable of creating something bigger. We wanted to come up with a format that is different from other fairs, and to further develop the idea of online viewing rooms.

The online experience of INTERCONTI WIEN includes an interactive video documenting the actual set-up in the hotel. The viewer can navigate through this video and chose the individual projects and galleries that they would like to learn more about. We only had a couple of months to develop this in collaboration with Treat Agency.

To get back to your question, we perceive INTERCONTI WIEN as a project completely independent from the other fairs happening in Vienna. In fact, there might be a need for more of these sort of smaller, individually organised projects reflecting different aspects of the city – another great example was HAUS, which was organised by a group of independent spaces this summer and took place in an old house. It was extremely refreshing!

How is INTERCONTI WIEN financed?

Every participant is paying 800 Euros, but much of the project was financed by supporters: there are sponsors like Tectus Risk Management, who financially supported us; Kunsttrans, with the expensive transport of the vitrines; Wirtschaftsagentur Vienna; the Museum of Applied Arts, with a reduced rental price of the vitrines; the Hotel Intercontinental, who gave us the space for free; Treat Agency, who is charging far less for their digital and video support; and Kunst-documentation.com, the photographer who is shooting everything for a price that just covers his costs. So, all in all, everyone involved was very supportive and there have been even more who offered to help us to realise the project in these difficult times.

The last few years it has been almost impossible to do new projects in Vienna without getting involved in a cultural-political feud. In 2011, Spike organised a fair – Fruits, Flowers, and Clouds – at MAK and brought young, international galleries to the city that would never have come to (the former) Viennafair. There was tremendous opposition against us at the time, and the project was undermined to the extent that it never took place again after the first iteration. Is the atmosphere in Vienna now more open to new ideas, formats, challenges to the existing order?

INTERCONTI WIEN is a relatively small project in comparison to Fruits, Flowers, and Clouds! But one thing is for sure: the amount of new galleries that have either opened or moved here from elsewhere like Ermes–Ermes, Shore, or Vin Vin, have created new synergies, and these are not necessarily confined to the different generations. There has always been a lot of communication and exchange going on between galleries in Vienna, both because the scene is relatively small, but also because of a project like curated by, for example, which is a yearly gallery festival that we highly appreciate.

Another aspect that has changed since 2011, is that there is a heightened focus on local communities in general – a development that started before the pandemic, but which has certainly been reinforced by it. A large part of the Viennese galleries act globally, and there is an interest way beyond Austria as to what currently makes up the art scene in Vienna.

Considering your role in organising the fair, do you see this as a model going forward, that galleries will be in charge of organising fairs themselves?

The fact that galleries are organising something for galleries is key to our thinking, and from the outset we have been very concerned with how a given model could potentially work for our colleagues and us. Democratic solutions for displays are key. The vitrines are more or less the same size so there are no larger or smaller booths, good or bad positions – a common art fair problem, which always creates good and bad situations for galleries. But there are more elements, the short interviews, texts, voiceover, Vienna tips, etc. that are included in the film online: they all add some insights and context to the works and art presented.

The model of something real existing and digitally displayed is one that seems functional, because we are all used to installation views and also video documentation (as compared to virtually-generated spaces). Coming back to the question of self-organised fairs: throughout the process of conceiving and then realising this project, everyone involved has been exceptionally supportive, from colleagues to sponsors to other, less involved parties; it felt like they were all happy to contribute and to be part of something that developed organically out of a particular situation and need. We are all running galleries and we are not sure yet if it would be the same if we would have a professional structure behind a project like this. We wouldn’t have the time to work on a fair on a regular basis! It has turned out to be surprisingly time consuming!

What was the thinking behind choosing the specific location of the hotel?

The Intercontinental was part of an American politics of internationalisation post-WWII. Originally owned by PANAM, this place brought something glamorous, international and also promising to Vienna in Austria’s conservative grey late 1960s, early 70s. We do not know how much it has to do with that symbolic fact or more with its non-Austrian style, but the lobby and the bar were always a meeting point for the art world, if you wanted to escape Vienna’s drinking spots such as Alt Wien, Kleines Cafe, or Wunderbar. The political discussions related to the last Vienna elections also took place in the ballroom and we were reminded how amazing these spaces are, with huge windows facing the Eislaufverein (Vienna Ice-Skating Club).

What do you hope visitors to INTERCONTI WIEN will take away from their experience?

We hope to introduce visitors to the galleries and artists presented at INTERCONTI WIEN in a new format that takes the concept of an online viewing room a little further, presenting insights and context for the works shown. We also aim to offer a glimpse into Vienna’s atmosphere and share some of its energy with viewers worldwide. Ideally, this project will increase visibility and encourage discourse and exchange with our guests.