Jordan Wolfson's robot: In the Moment of Terror 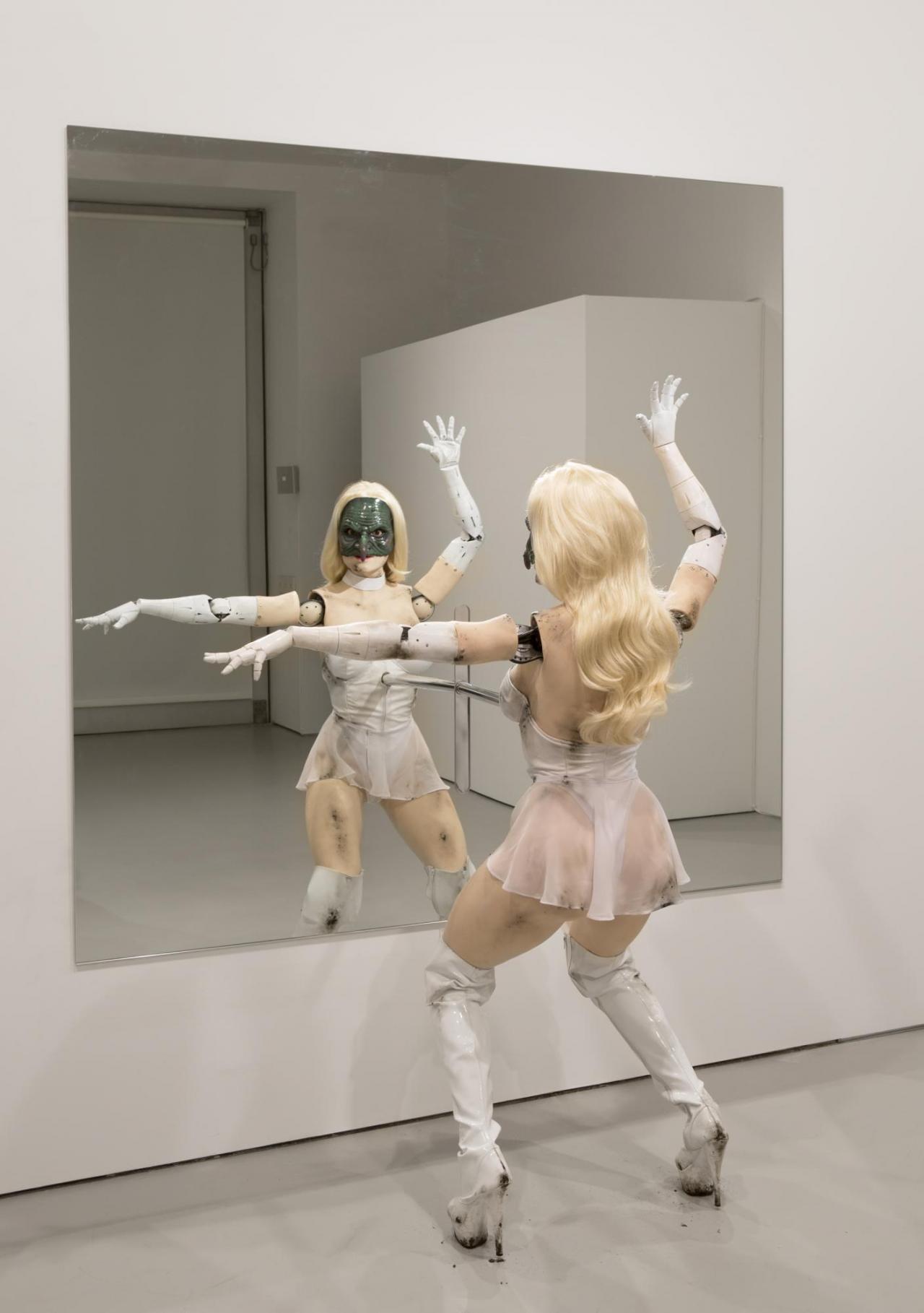 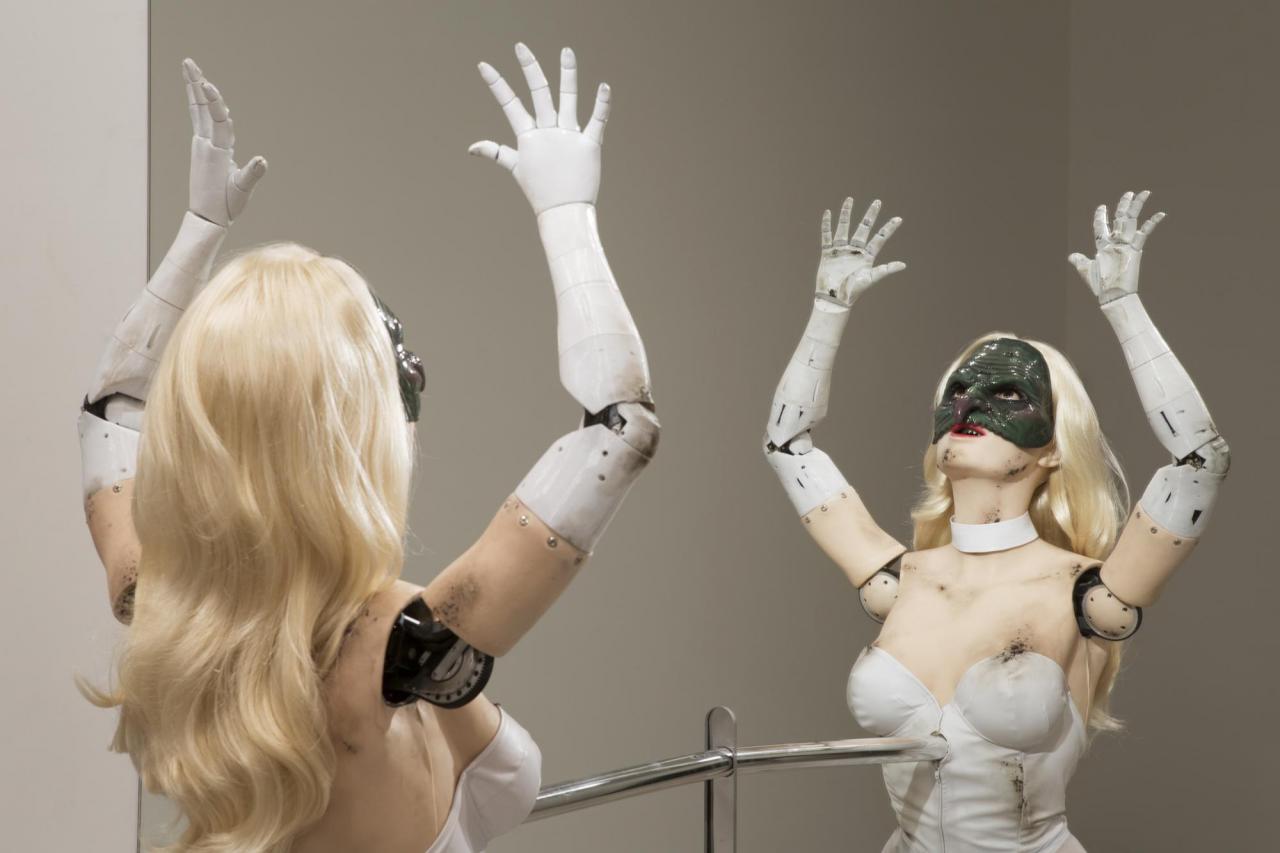 For many visitors, Jordan Wolfson’s robot represents a first contact with the most technologically developed and also most disturbing robot they have ever seen. But can the gallery space do justice to the experience? After all, a robot is only as evil as the world into which it is placed.

The animatronic work is hypersexualized, barely clothed, yet heavily spattered with black dirt. It stands in a small room, where a shiny pole fastens it through its belly to a large mirror. The robot (Female Figure) 2014, dances lasciviously, sometimes just lazily, as if lost in contemplation of Lady Gaga’s »Applause«, Paul Simon’s »Graceland«, and a narcotic version of Robin Thicke’s »Blurred Lines«. You have to register to visit the installation at the David Zwirner Gallery and then can only enter in small groups of two or three, which lends the proceedings a ceremonial air. After being formally admitted and guided through a dark, narrow corridor, visitors immediately feel ill at ease. The sinister tension is not so much in the astonishingly graceful movements of her fingers – it is the black, evil eyes, which glimmer from behind a green Venetian mask. The artist Jordan Wolfson, born in New York in 1980, had the robots constructed for half a million dollars by a special-effects studio in LA, and the seven-minutelong programmed sequence leaves room for variations: (Female Figure) 2014 is, for example, fitted with a motion sensor to recognize when people enter or leave the room, allowing it to quietly observe them. If you stand close to the robot it looks deep into your eyes, and there is a terrifyingly disorienting moment as you experience yourself as an object in the automaton’s gaze.

This mannequin has been artfully manufactured from expensive plastic designed for space travel, and it has no trouble counterbalancing the heavy themes Wolfson has burdened it with: cyborg theory, anthropomorphism, the Uncanny Valley, the objectification of women under the male gaze, motifs of masks, mirrors, and the doppelgänger, and of course the fusion of art and technology that is always immanent today – all of that is part of the package, no big deal. Some viewers have found ways to connect it to the history of art: think, for example, of Degas’s Little Fourteen-Year-Old Dancer, the puppets of Hans Bellmer, or a threatening character from Mike Kelley’s universe. But what’s really impressive about Wolfson’s work is that all of that doesn’t matter in the slightest. When you experience the animatronic robot in person, all the references art professionals might customarily make give way to the raw power of genuine emotion. Such feelings of real excitement, physical and intellectual stimulation occur all too rarely in a contemporary art exhibition. You simply and straightforwardly feel a primal human fear when confronted by the humanoid robot.

»Close your eyes«, it says almost seductively now and then, but you can’t, because you know that the animatronic machinebeing is then going to break free and kill you.

But is it after all perhaps worth taking a second look at the cultural references and the visual appearance Wolfson has given the robot? As an artistic touch, he has placed the automaton in a room within a room. Although it is in a gallery in New York, the robot never really leaves its birthplace, Hollywood. Because, in addition to bringing to mind Holli Would from the 1992 film Cool World or a campy Marilyn Monroe, it constantly invokes the conditions of its production as well: the division of labor and the extraordinarily high budget. As Lady Gaga puts it in »Applause«, »Pop culture was in art, now art is in pop culture, art and me.« That concoction has rarely if ever been blended together like this, or for this kind of money, but at the same time reduced to horror, the cheapest effect of all. For all its misogyny, the mannequin at the same time functions as a caricature of the fetishized pop star: it sees the world only through its own reflection and, transfixed by the pole, can only rise up and down in a clearly defined vertical space, trapped in the repetitive pattern of its own performance. But it also functions also as a humanoid robot, albeit one whose joints are visibly bolted together. Nothing is taken to its end point, but everything is touched upon: »My mother is dead. My father is dead. I’m gay. I’d like to be a poet. This is my house,« announces (Female Figure) 2014 at the beginning and end of the looped performance. It is Wolfson himself speaking out of the automaton, rattling away about the clichéd dreams and realities of the artist’s life with the cold, staccato indifference of a speed freak. Everything is brought into play because everything is possible, and everything is totally irrelevant because nothing is new.

In this light, the mannequin seems soiled not only literally but also – in an almost annoying way – metaphorically, by the old myths and familiar theories of the worlds of art and pop. All the different costumes and disguises that Wolfson gives it look strangely tired, from the masks to the physical grotesquerie to the overproduced pop music, and even the mirrored caricature. Aesthetically, he in the end makes quite deliberate use of the arsenal of the familiar, a renewal of the classic story of what Beyoncé calls the »sweet dream and beautiful nightmare« (in a song accompanying Wolfson’s video in the adjacent room), long since established by Mary Shelley’s Frankenstein and E. T. A. Hoffmann’s Olimpia.

In the face of the overbearing technology that sends shivers down your spine in the gallery space, every artistic gesture and reference that is added on top of it seems stale. That is perhaps a demonstration of how little we have changed as a result of the latest technology, and how little a humanism that exists only in the myths of the pop and entertainment industry can counter its force. In this always lifeless spectacle, work coagulates into the sign of a doom-laden nihilism that, quite unlike the optimism that characterises post-Internet art, reveals the narrowness of the space with which artistically inflected thought can still respond to technology. (Female Figure) 2014 thus appears as the undead spawn of a blunted and terrifically ugly art, which may be exactly what we deserve.

This text appears in Spike Art Quarterly N° 40 and is available for purchase at our online shop.

Timo Feldhaus is a writer and editor at Spike. He lives in Berlin.