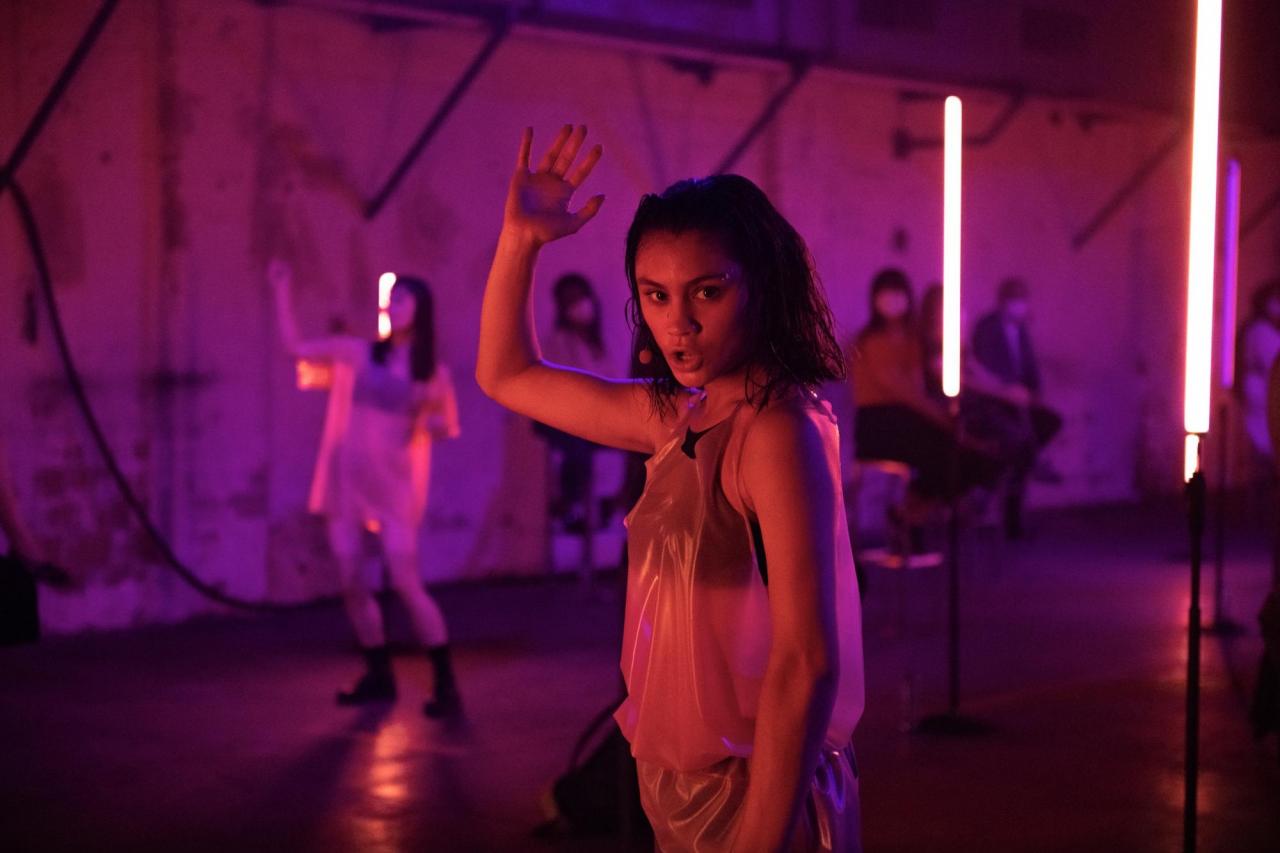 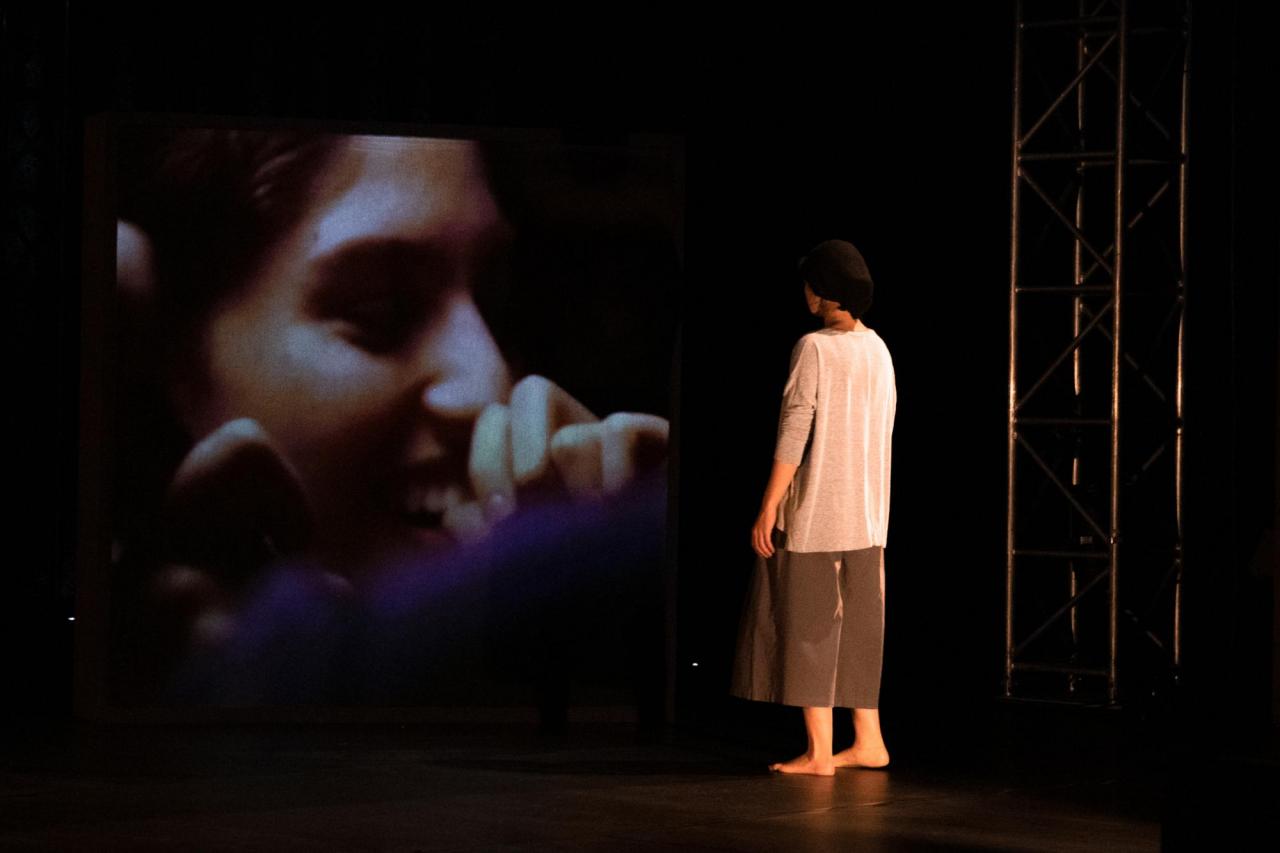 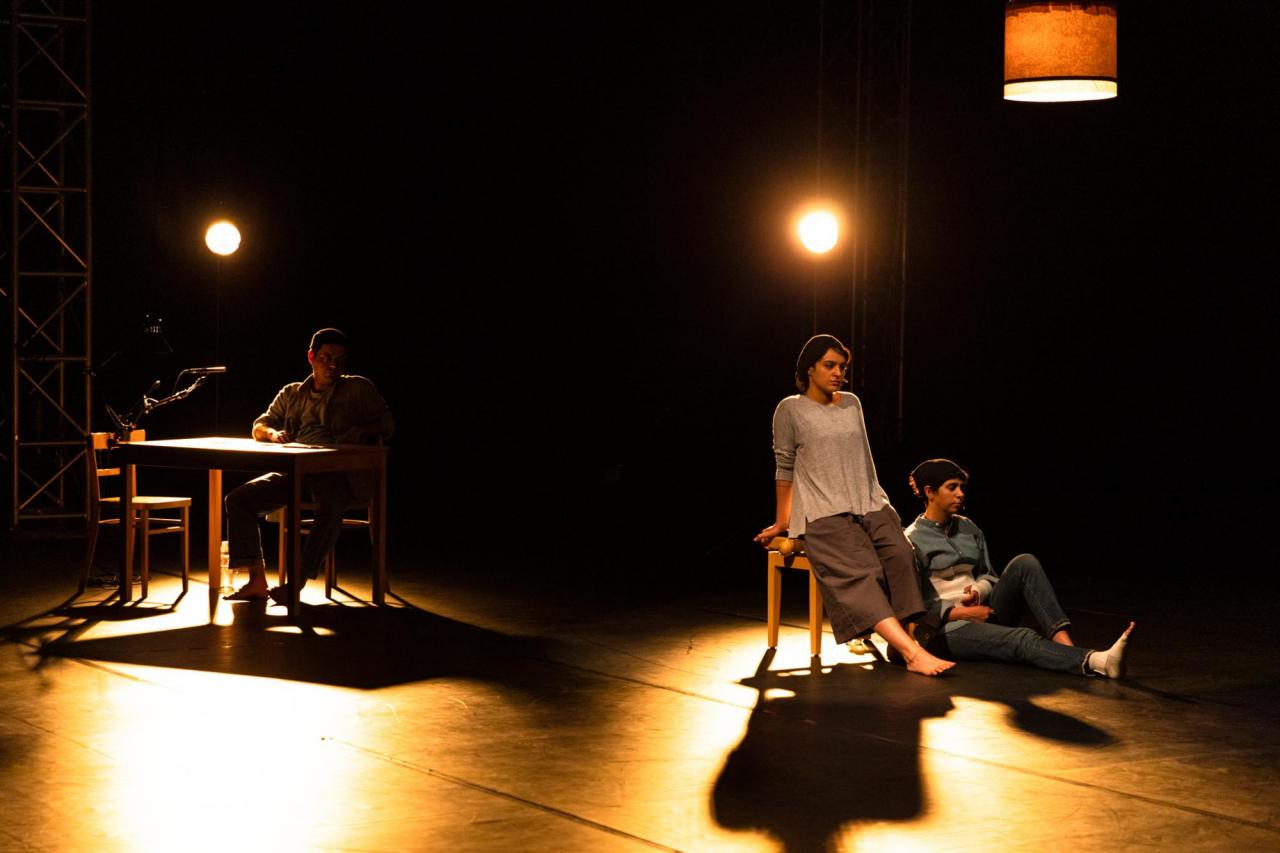 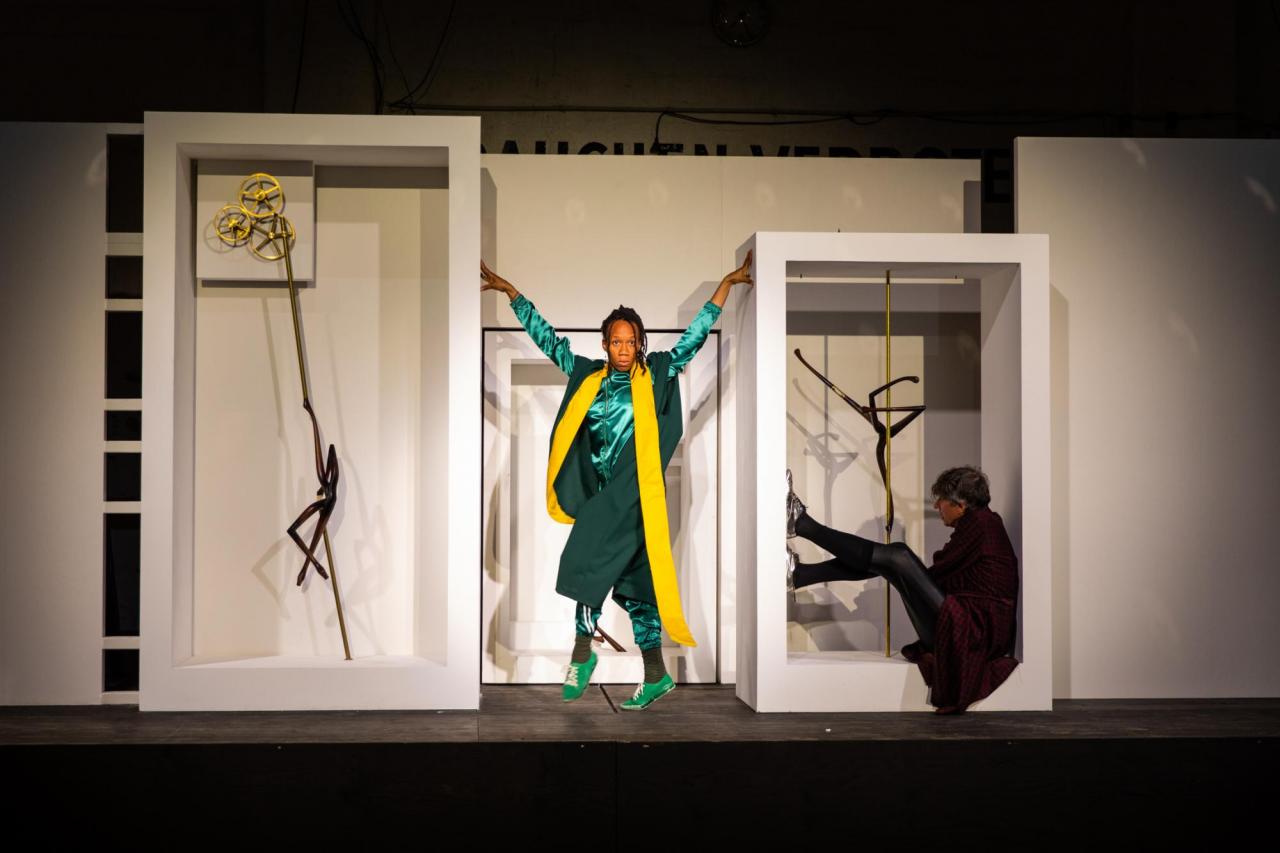 Do you want to be a good audience member? I definitely do. I never stare at an actor or dancer. If they look at me during a performance, I try to return their gaze with an open and friendly expression, avoiding anything that might trouble them. Even when I realise that a work is not for me, I never leave before it’s over. And while there may have been moments when I dozed off in concerts or plays, I swear that I never snored. Yet, I do not consider boredom a valuable aesthetic experience, and was therefore a little scared when, in preparation to attend this year’s Wiener Festwochen, I googled Quasi (2021) and came across a review penned by some previous viewer puzzled by a piece in which so little happened that many spectators left early, accusing the work by Azade Shahmiri of being totally anti-narrative. Having written my PhD on visual storytelling, such affirmations are, for me, a real turn-off. Not because I want everything to tell a story, but because works that “deconstruct traditional narrative” tend to insistently point towards stereotypical narrative scripts rather than actually conveying a story – for instance, Gregory Crewdson’s photographs or Francis Alÿs’ over-ambiguous paintings.

But Quasi didn’t try to imitate anything. It did its own thing altogether. Actually, each of the three actors did his or her own thing, with at best overlaps, but little space for encounter between them. One mostly tried out movements; one wrote letters to himself in prison, thinking about past and future lives; another one explained why her life-threatening actions were really sophisticated experiments misinterpreted, by others, as suicide attempts. The snappy voice messages which the suicidal ghostwriter sent to ever-nagging clients who were unhappy with her version of their master’s thesis or doctorates, were outright hilarious.

There was only one essential element that I could hardly get myself to relate to: footage from a film that was shot 20 years ago by Hamid Jafari. It was projected on a large screen, and occasionally the actors would converse with it or imitate its gestures. From the statement of intent, it was clear that this film was essential to the project and Shahmiri even wanted it to be considered like a fourth character. And yet, in the absence of clearer narrative framing, it remained, to my eye, merely a piece of found footage until it started to speak towards the end. To Shahmiri, perhaps it was personal – after all, the video showed people that the artist knew, some of whom have since passed away. Or perhaps it was cultural, too: One of the actors mentions how things have changed in 20 years, how differently people used to dress and behave. While this is more than a fashion issue in Iran, a country where young people constantly negotiate what is permissible under religious leadership – how much hair they can show, how much make-up they can use, and how tight their "manteau" can be – all of which, of course, eluded me, the foreigner in a piece which, rather than attempting to deconstruct narrative, just didn’t care to construct one in the first place. For me, though, it didn’t really lack one, either, because each piece of text was of value in and of itself, and the actors were able to calmly convey intensity without spectacle.

There is something quite generous in letting other people watch you breathe and get exhausted.

The intensity was of a very different kind in Echoic Choir (2021). “I must have more mirror neurons than other people”, I repeated to myself several times during the performance. While the viewers around me had no problem with sitting absolutely still as composer Stine Janvin’s “fake synthetic music” produced by human voices got more intense, I could hardly keep myself from starting to dance on my chair. It was quite a strange piece, of a kind unfamiliar to me, where six dancers, including choreographer Ulla Sickle, were raving, breathing, raving, speaking or vocalising, as they simultaneously performed between groups of roughly ten audience members, each sitting on a high chair.

There is something quite generous in letting other people watch you breathe and get exhausted. And it felt great to get so close without the mediation of a screen or stage. Paradoxically – given that there were still strict rules for physical distancing in place – Echoic Choir achieved a more intimate relationship between audience and performers than most typical theatre or dance pieces. Retrospectively, I think that Sickle might have consciously aimed to answer the question, How can we get as close to the public as possible given that we need to respect all these rules? And sitting as close as you could legally be at that moment in time turned out to bring us much closer than we usually get to performers on stage.

This proximity came at what some considered to be a cost: each group of audience members really only had access to one performer, the others hidden from sight. Mine was Annalise van Even. Rather than the collective production of Echoic Choir, my visual experience was of Annalise’s version of it. But unlike other attendees who voiced their regret at not having seen more performers, I felt privileged to get a chance to spend one hour focusing on just one. The fact that Annalise’s version of Echoic Choir was absolutely fascinating and I couldn’t envision how it could have been done any better helped; she rarely seemed to be gasping for air or even to sweat more than normal despite the intensity of it all. She seemed to let go and yet stay in control – the perfect example of Diderot’s Paradox of Acting applied to dance, intense precisely because she never lost her cool.

But there was a more fundamental reason, too: It was relieving for me to be able to focus my undivided attention on just one performer. I never really saw the point of having five or more people do the same thing onstage, unless the point of a performance was to experience how different bodies react to the same challenge – like in Mónica Calle’s Ensaio para uma Cartografia (2018). After all, all dancers in a conventionally-staged performance are at the same distance from any one audience member anyhow. Why not just choose the best dancer and have them dance alone? Why not distribute them in space and thus get them closer to the audience?

Common wisdom has it that the “last dance” is a solitary one. So there is something strangely reassuring in artworks where death appears as a person. In the Dance of Death in Basel (between 1431 and 1448) the Grim Reaper is a compassionate killer, playfully adapting his own ways to his victims’ as he happily does away with kings, beggars and bishops. This piece, probably influenced by the outbreak of the plague in 1439, served as a major inspiration for Markus Schinwald’s Festwochen production, Danse Macabre (2021). Sitting on stools in the middle of a box – a huddled mass, save the mandatory distance – we followed dancers that performed mostly in isolation around us on a multilayered strip with a 24-person orchestra all but hidden by the architecture. While death himself, a sleek figure in a dressing gown played by Oleg Soulimenko, moved about freely, the others were stuck in their spots, dancing and moving back and forth in a staircase, a box, a window, door or an oversized drawer.

Something always happened behind our backs, such that, in the end, each viewer had seen a different piece, mostly performed by the dancers that were close-by. While this connected the piece to Echoic Choir, there was something more frustrating here. With each encounter between death and a dancer differing from all the others, spectators were bound to not just miss out on versions of the same piece, but on whole chunks of the work. My dancers were Imani Rameses – who created a personal mix between urban dance and classical ballet getting more and more frantic, as if hyperactivity could save her from her destiny, and Philippe Riéra – founding member of Superamas performance group – who performed an erotic back-and-forth with his executioner.

Having hardly any narrative, dancers doing more or less as they pleased without a clear dramaturgy or choreography, Markus Schinwald’s Danse Macabre could hardly be called a dance piece. It’s a work of temporal art made by someone more inclined to the spatial; an episodic experiment in architecture and stage design, where two of Schinwald’s mobile sculptures feel as present as the performers. The skewed score by Matthew Chamberlain for 24 musicians, performed by PHACE, is a different story altogether. Sounding like Ennio Morricone on Valium, the work had limited danceability and movements like The Young Reaper or The Fragile Beauty of Cigarettes had no thematic connection to what happened on stage whatsoever. But I definitely wanted to hear it (again) – so I was happy to find a version, complete with odd comments by Chamberlain, on his YouTube Channel.

KLAUS SPEIDEL is an art theorist, critic and curator based in Vienna.

This text originally appeared in Spike #69  – STORYTELLING. Copies are available in our shop!