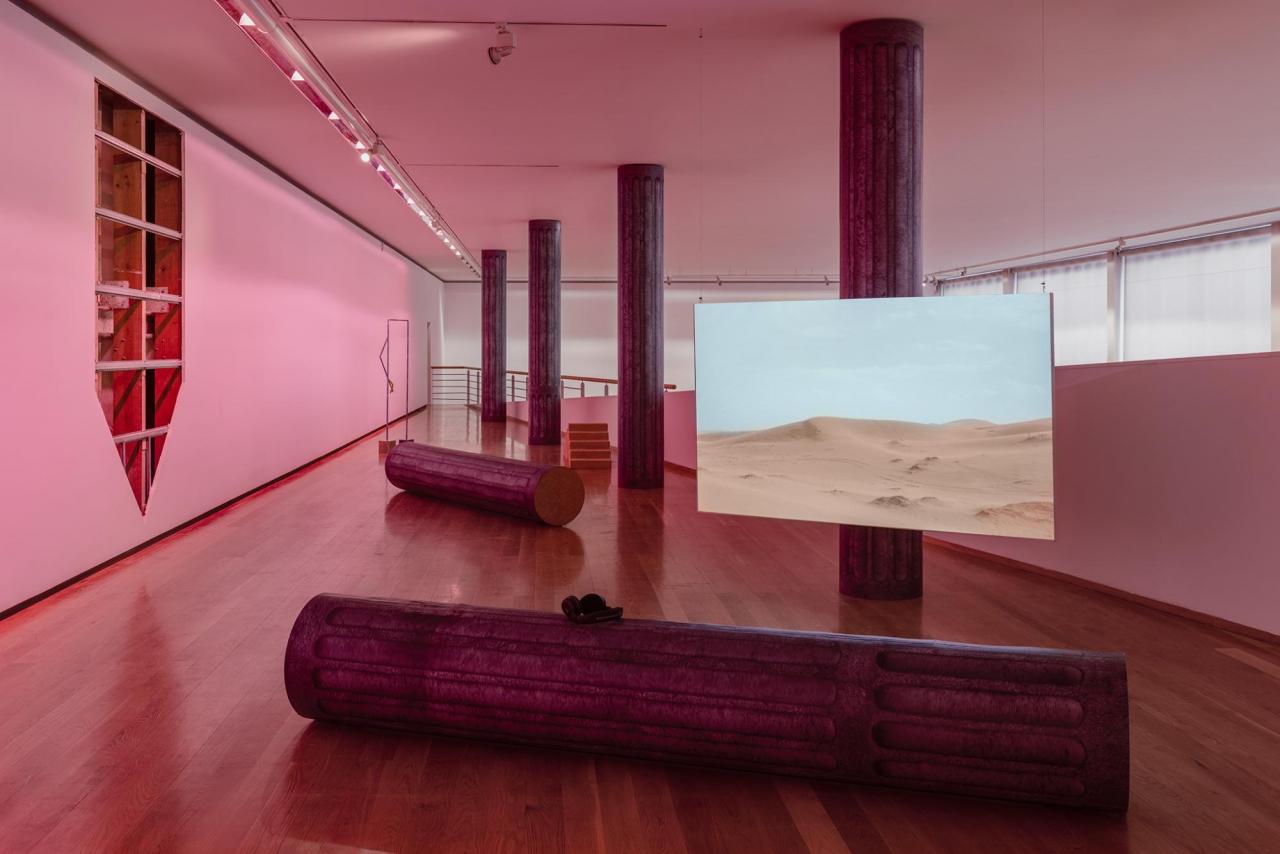 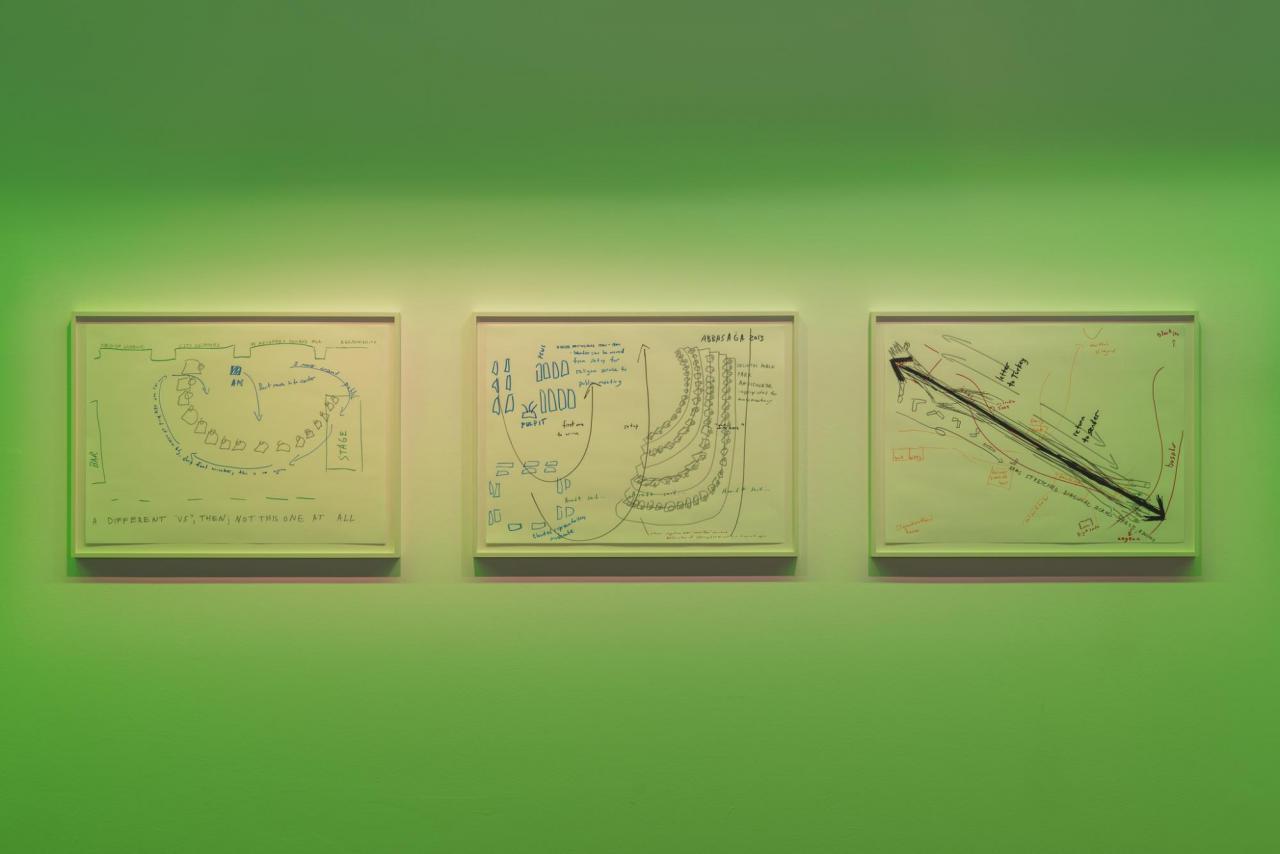 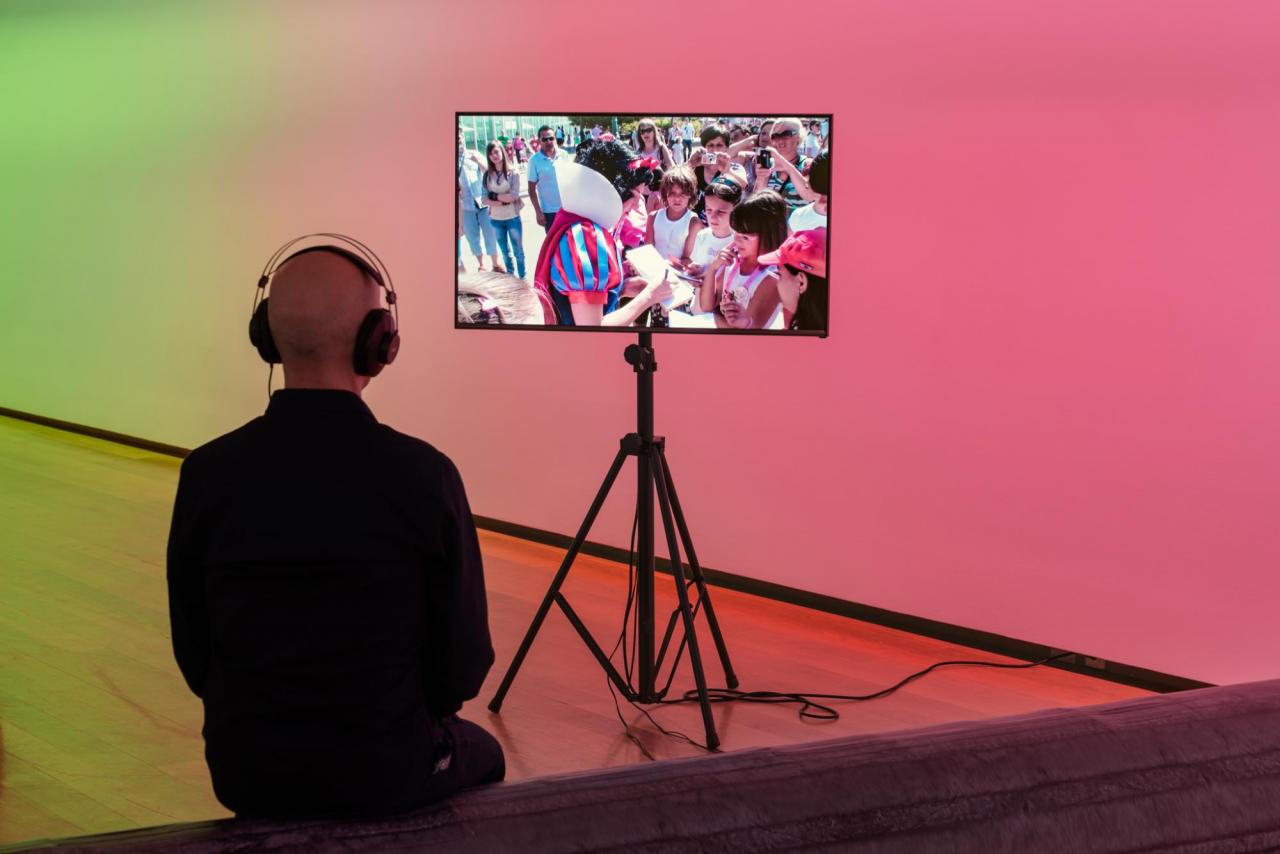 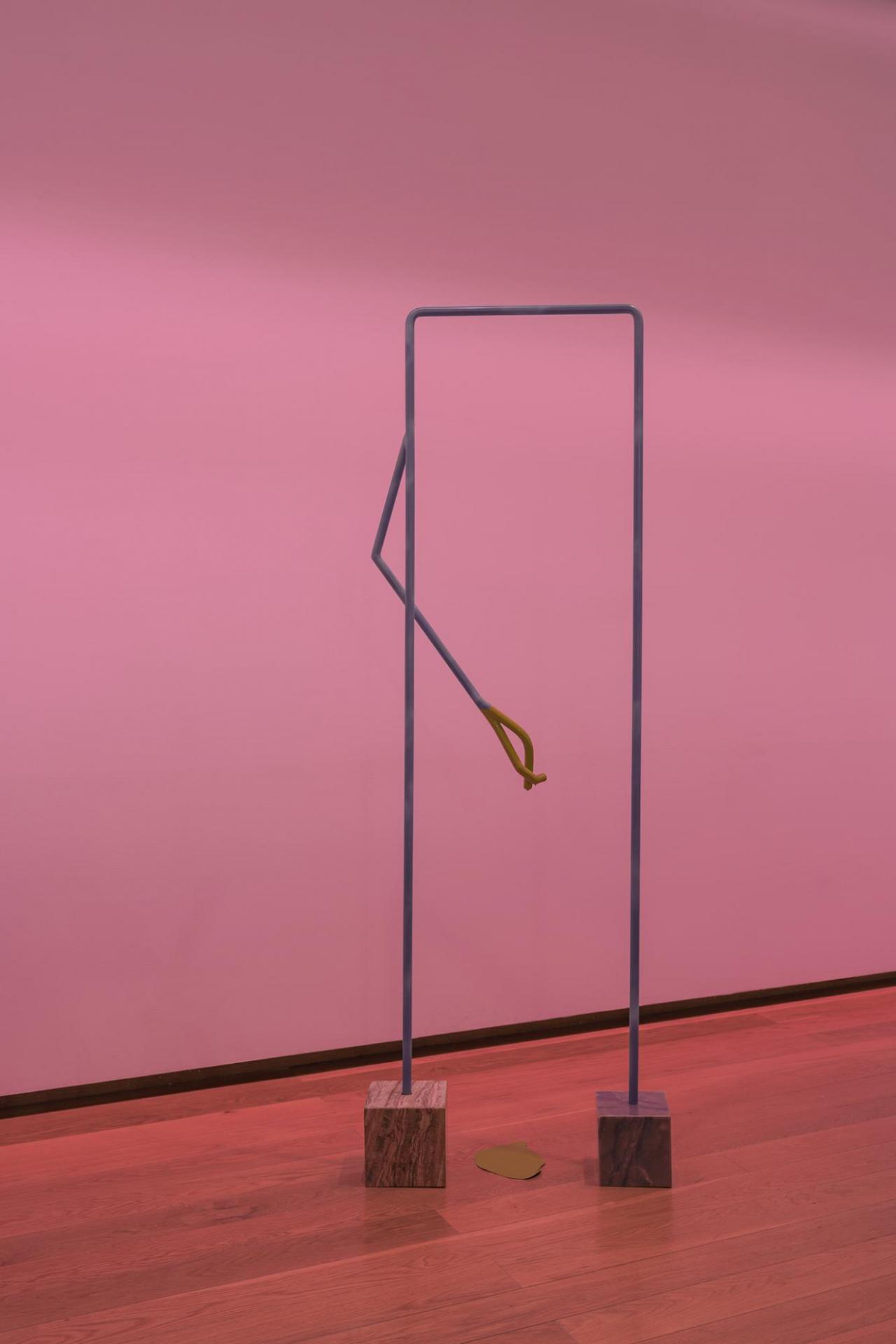 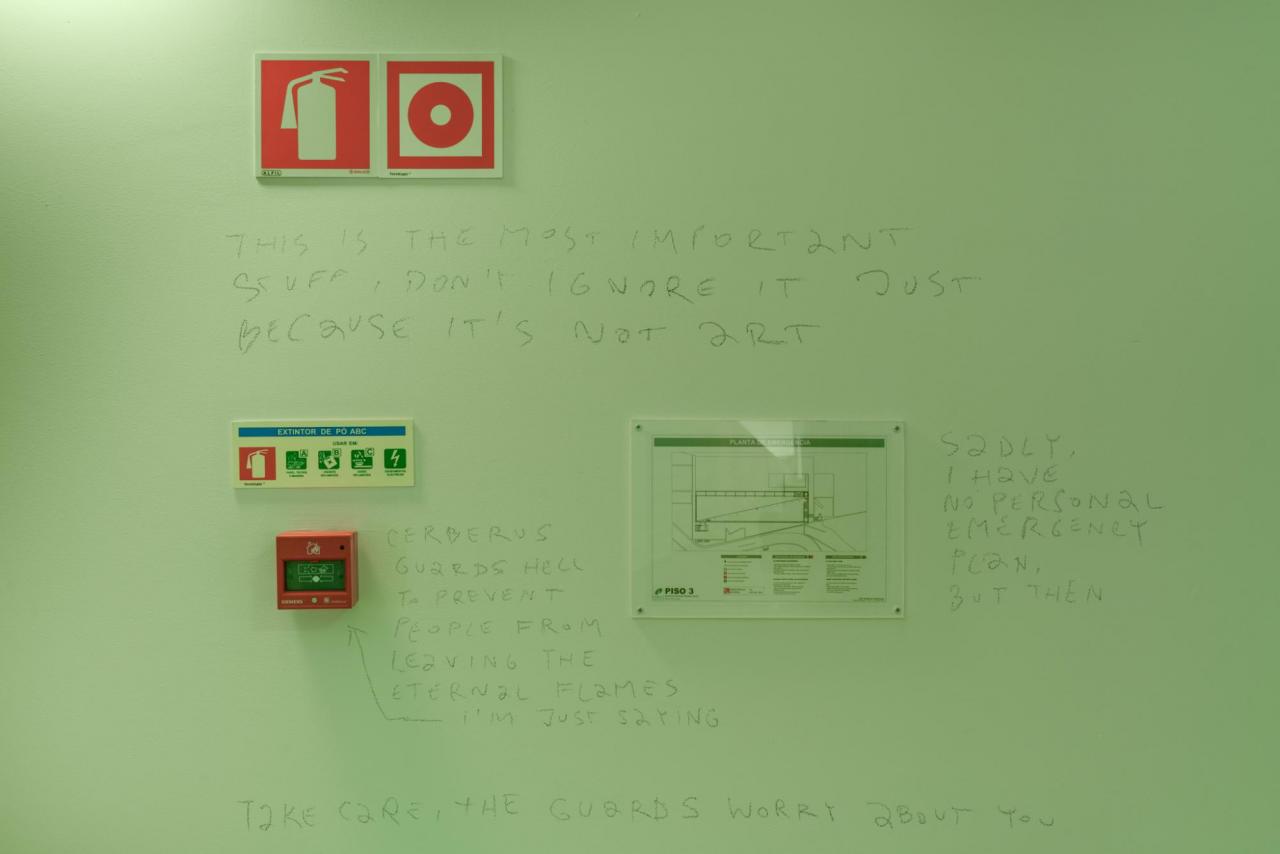 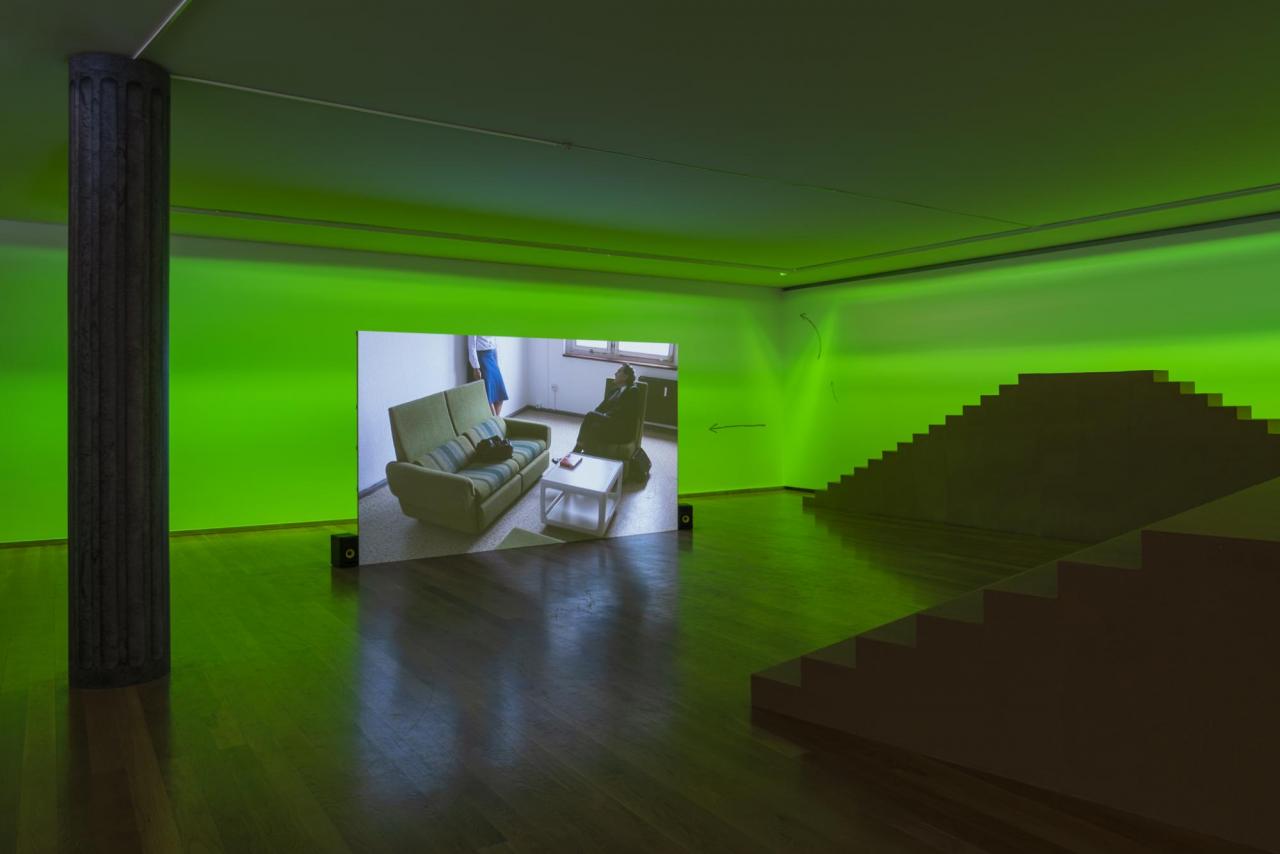 Things that get buried in the sand have a tendency to resurface, as the exhibition “Desertado” (Deserted) at Porto’s municipal gallery reminds us with its subtitle: “Something that happened may happen again”. This solo presentation by Maria Trabulo, which plays host to a conversation between another nine invited artists, visually employs the desert in its capacity to be vast and sandy, but more productively summons its abstract connotations of absence and aberrancy; to desert can sometimes be an act of defiance.

Trabulo has made a stage-set for the invitees: staircases, walls and plinths of sand-covered fibreboard, and cardboard copies of pillars from Persepolis the height of the room, scattered across the long hall. Her silhouettes are all derivative of that ancient city, and other ruins of antiquity – that is, things lost, recovered, and ideologically repurposed.

Her film Digging the Desert (2019) is a collage of fragmented testimonies that tells the story of Iran’s extraordinary national collection of Western modern art, shown only a handful of times since the end of the revolution in 1979. The video functions as a mirage, in which old photographs of the collection emerge from sand, as if from an archaeological dig, while unnamed voices recall what they know of the elusive trove of masterpieces.

Departing from this narrative, the rest of the exhibition makes a thematically concise ensemble of other artists’ works, which – much more so than the unruly metaphor of the desert – further probe the role of memory, fiction and performativity in relation to history and the established boundaries of authority. Much to Trabulo’s credit, these works, mostly from the 2000s, offer some maturity and grounding to her own very fresh, and still somewhat provisional effort.

Most obviously adjacent is Melvin Moti’s video No Show (2004), a reconstruction of a 1940s tour of St. Petersburg’s Hermitage museum, which at the time had been evacuated for safekeeping. Here, description and memory are tools for both the preservation and appreciation of art. “The Russian art department is closed today,” says the guide, who clearly has a personal preference for the Italian baroque. In the absence of the objects themselves, truth remains the prerogative of the interlocutor.

Description is also key in Dora García’s film Zimmer, Gespräche (2006), which plays consecutively on the same screen as Moti’s. In a wonderfully scripted scene set in the GDR, a Stasi officer meets with his informant. “Remember: nothing is normal”, he stresses, as he meticulously describes the interior of the Leipzig Plattenbau, much as the guide in No Show had recalled the grand hall of the Winter Palace from the darkness. The work elegantly ties the issues around writing history through collections and testimonies to those of the surveillance and censorship of the state so pertinent to the case Trabulo outlines from Tehran.

“I don’t live, I act, I translate, I play” is another memorable line from García describing the alienation the informant feels in her role, but could equally apply to the approach of Pilvi Takala. Event on Garnethill (2005) is a book – available for viewers to read wearing white gloves – in which Takala buys a school uniform for a school she does not attend, and hangs out around its premises while obeying only two rules: do not approach anybody and never lie. It is a precursor to the video Real Snow White (2009), where we see the artist barred from entering Disneyland for arriving in the character’s signature yellow dress and red cape. “There’s a real Snow White inside”, personnel reasons. “I thought Snow White was a drawing”, Takala replies, abandoning her previous principles and feigning innocence.

In “Desertado” what is abandoned are the notions of truth, reality and history, which all become apparent as constructs, and highly limited ones at that. With a distinctly Finnish humour, Takala pushes these boundaries to show that one pretend princess is made more real than another only by virtue of the powers that be. But, like sand in the desert – to honour Trabulo’s metaphor after all – the thing about power is: it’s constantly shifting.