Laurie Anderson's "The Language of the Future" 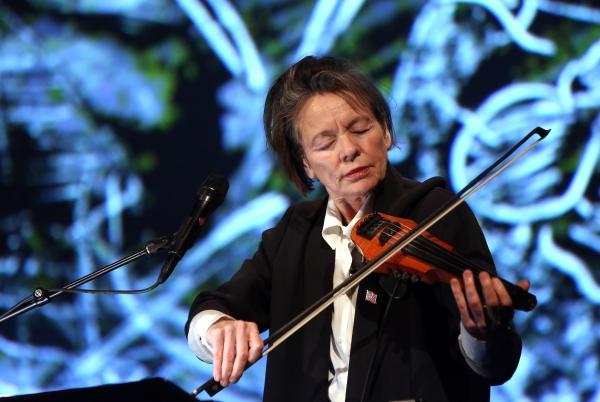 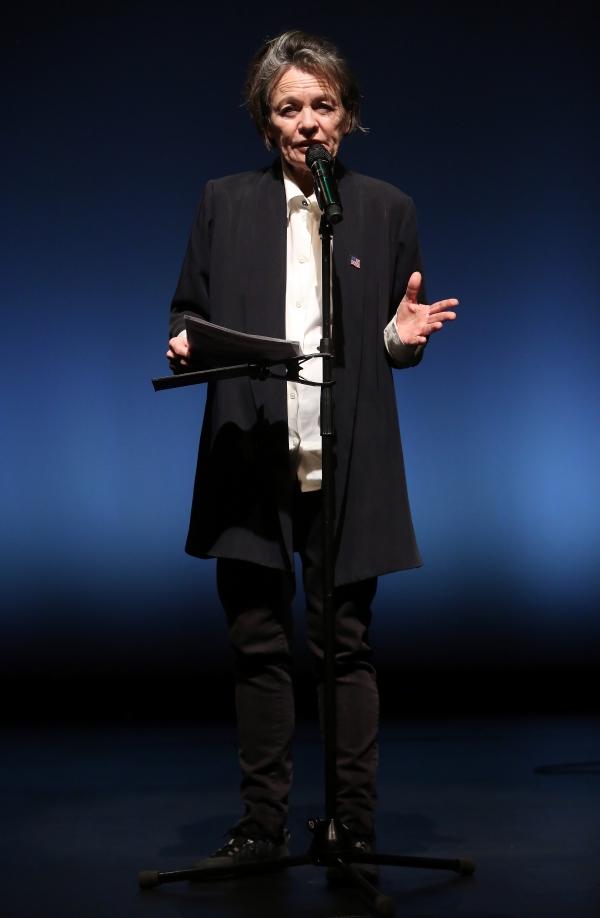 This year’s transmediale festival concluded with a valedictory performance by Laurie Anderson. A mixture of storytelling, music, and interactive video performance, Anderson showcased the deep interdisciplinarity that has always defined her practice. No need for genres or explanations, with Anderson, the simple act of presence can lead in an almost infinite number of possible aesthetic directions and shades of emotion. Anderson’s career as a pioneering electronic musician and supremely unlikely chart-topping artist is now so theorised and, to a certain extent, mythologised, that it’s easy to forget how fresh and unexpected her work can be.

The Language of the Future began with Anderson stepping on the stage, shouldering her electric violin and summoning a digital orchestra. A screen behind her showed chalk images and text appeared, including the phrase “some say our empire is passing, as all empires do.” The question of who the “we” in such an empire could easily be posed. Though Anderson spent a good deal of the evening speaking rather directly about politics, even the political career she embarked on in her youth, the empire she spoke of felt like something larger than an exclusively political structure. Indeed, shortly after she concluded the first musical piece of the evening to Naomi Klein’s indispensable book The Shock Doctrine, the implication was that the imperial downfall might be species-wide or even planetary. Anderson said her original plan for this performance had been to make a foray into stand-up comedy, but the results were something rather more unique. While she did offer one of the two jokes she claimed to know, The Language of the Future felt more like a new form: stand-up elegy. A sense of mourning pervaded the evening, perhaps for Anderson’s home country, but, perhaps also for the increasingly disappearing generation to which Anderson belongs. The voice of her late husband Lou Reed, as opaque and forlorn as ever, was almost impossibly moving over a violin piece, alternating between the sweeping chords and pizzicato plucking as Anderson nodded her head to maintain the rhythm but also perhaps to hold herself together at one of the highest emotional peaks of the evening.

Anderson’s mind did seem to be on eternity. She made a number of moving references to her Protestant upbringing, including a hilarious meditation on how ecclesiastical architecture might have been different if the Romans had kept stoning as a form of capital punishment instead of opting for the novel barbarism of crucifixion. Eternity, yes, but infinity, too. Anderson also spoke of the advance of technology, the grim commodification inscribed in the development of wearables, particularly Google Glass. Her anecdote about the Glass had the quality of a parable: she had invited the writer Gary Shteyngart to speak to her book club, but after having the won a competition to be one of the first wearers of Google Glass – yes, people competed to be given the opportunity to become product testers – Shteyngart was rendered almost incapable of speaking to the club because of the constant bombardment of information that came into his field of vision. Anderson also experimented with a kind of sensory overload, demonstrating a voice-triggered text display program that bombarded the viewer with words unconnected to those Anderson spoke, yet which appeared exactly in line with her cadences. It was an apposite work to present at the end of the cavalcade of modalities of techno-think of the transmediale festival. While imbued with Anderson’s sempiternal commitment to a forward-looking aesthetic, The Language of the Future was grounded in concerns that are timeless, personal and intimate.

William Kherbek is the writer of the novels Ecology of Secrets (2013) and ULTRALIFE (2016) both published by Arcadia Missa.