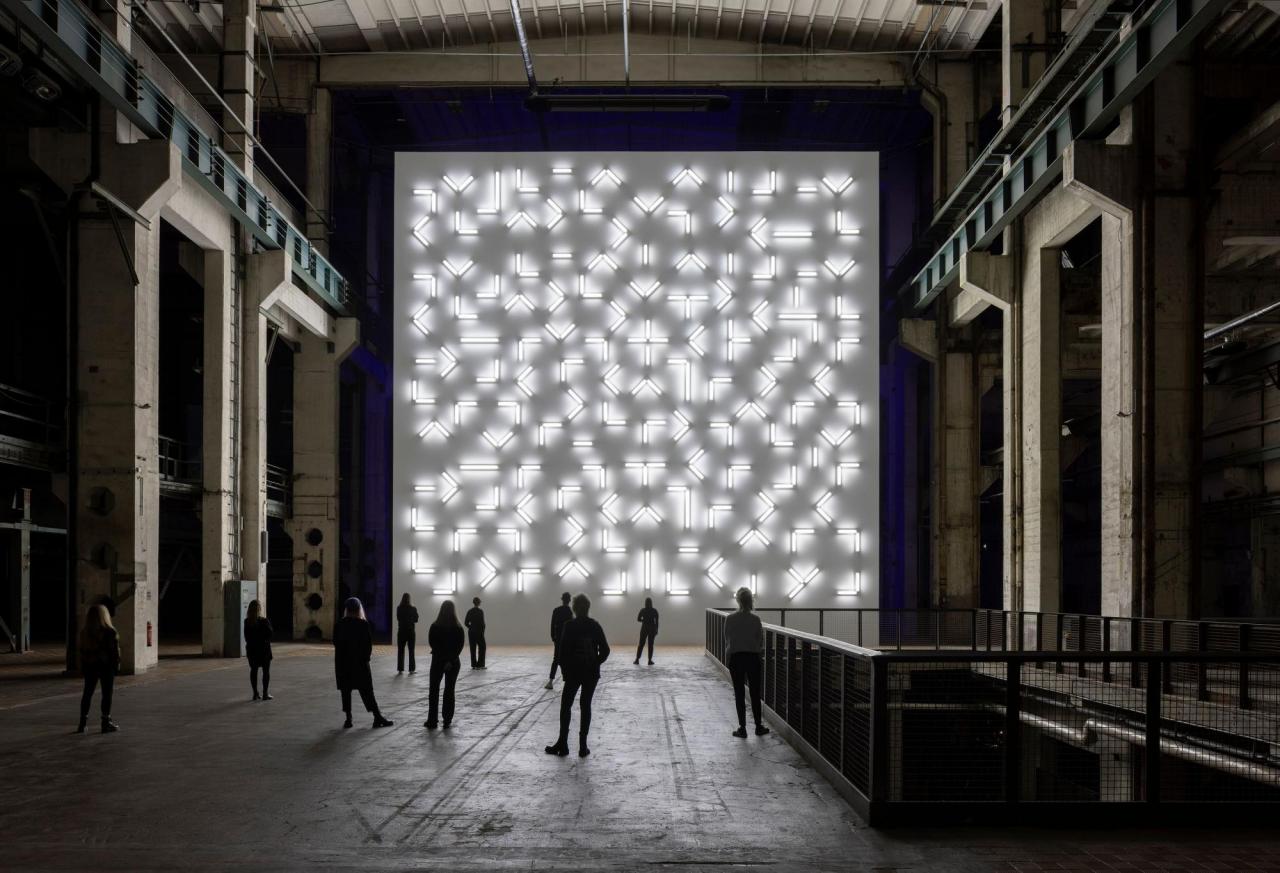 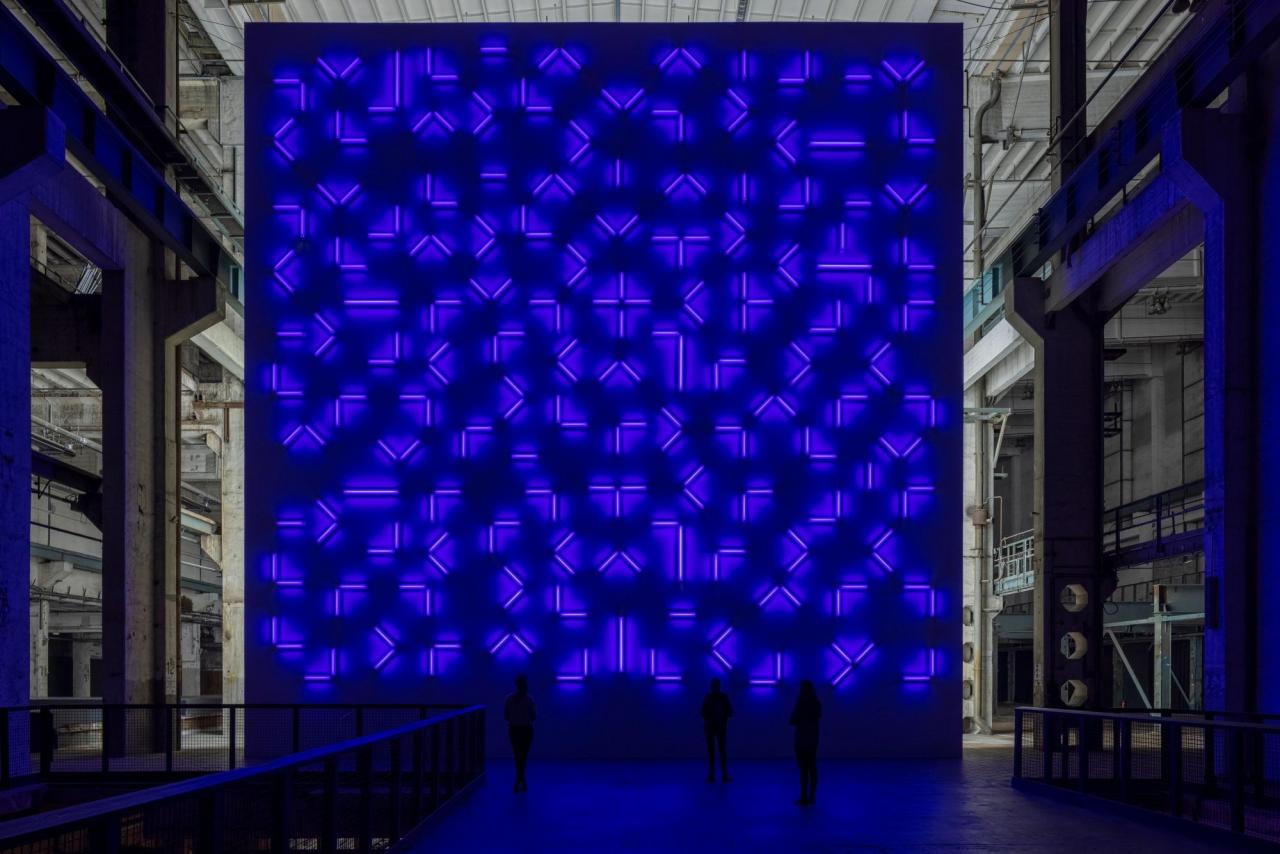 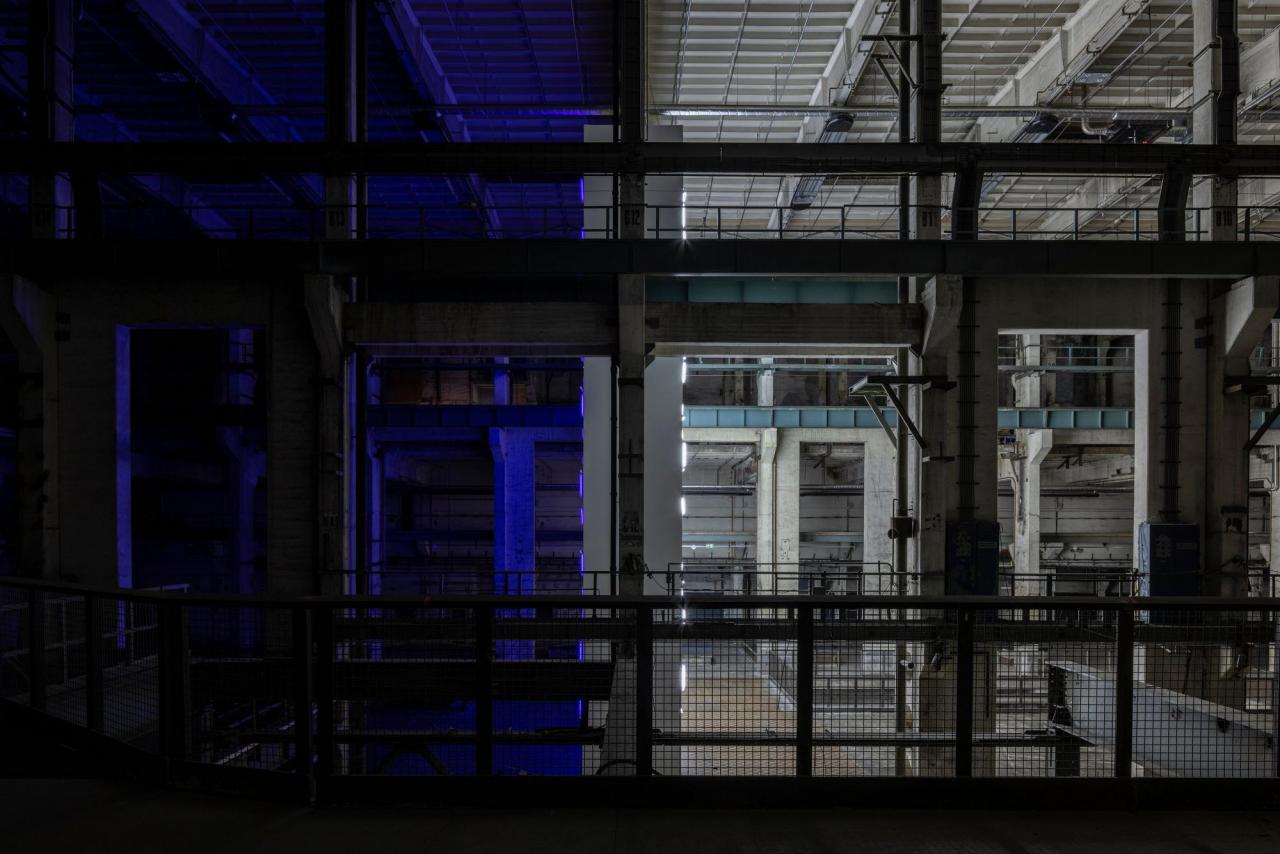 The detail that struck me regarding Robert Irwin’s wall-sized installation wasn’t, at first, the titular light, but the repeated pattern of fuzzy voids: grey amoebas, where the metal ends of tube-shaped bulbs cap the flow of brilliance. Exceptional moments of darkness. Light’s absence, just as much as its presence, is this artist’s medium; through these subtleties of negative space, Irwin doesn’t so much make sculptures as conditions for sensory experience.

A Southern Californian abstractionist who has, since the 1970s, done exclusively site-specific work, Irwin’s latest, Light and Space (Kraftwerk Berlin) (2021), is housed in the mammoth building that used to power East Berlin. Now, Kraftwerk – which now holds Tresor, OHM, and the annual Atonal festival, in addition to housing this latest project by the nomadic Light Art Space – is practically purpose-built for getting into altered states. The location’s obvious resonance with electricity amongst other forms of power hard and soft makes it fertile thinking-ground for Irwin’s takeover. Like electricity itself, or the medium that conveys it: Irwin’s work is conducive. Contemporaries like James Turrell and Dan Flavin obviously resonate, but the analogy that sticks is with the opening lines of structural filmmaker Stan Brakhage’s book, Metaphors on Vision:

Imagine an eye unruled by man-made laws of perspective, an eye unprejudiced by compositional logic, an eye which does not respond to the name of everything but which must know each object encountered in life through an adventure of perception ... Imagine a world before the beginning was the word.

Wall-mounted light tubes are gridded into rows – appearing as runes, rules, codes – but the effort to make sense of their pattern sends “sense” slipping away. Whatever’s hidden, this non-message evades decoding, and that itself becomes the message: pure perception, conditioning the eye to soak it up without squaring it into an existing schema. I’ve logged some good hours at Kraftwerk this year, getting my sensorium rearranged by, variously: synthesizer music; gin and tonic; harder things; love. But still, corners of this staggering space had never revealed themselves to me until they were touched by Irwin’s illumination. Paraphrasing the Light Art Space curator Amira Gad, the work is deceptively not so wall-bound; in time and with the viewer’s movement, it extends outward as far as it can touch. Light and Space plays with the threshold of what we are capable of (and willing to) perceive.  It borrows your faculties and takes them for a joyride, rewarding exactly as much inquiry into the here-and-now as you’re willing to afford it. Like Brakhage’s cinema, it reveals its dispatch in direct proportion to the time spent standing before it. Stay put. Something habitual unwinds, becoming looser.

Through subsea cables and satellites, communication now travels at the speed of light. But the diffusion of brightness, here, is intent on saying nothing. And by meaning nothing, it expresses everything.

ADINA GLICKSTEIN is the digital editor of Spike.