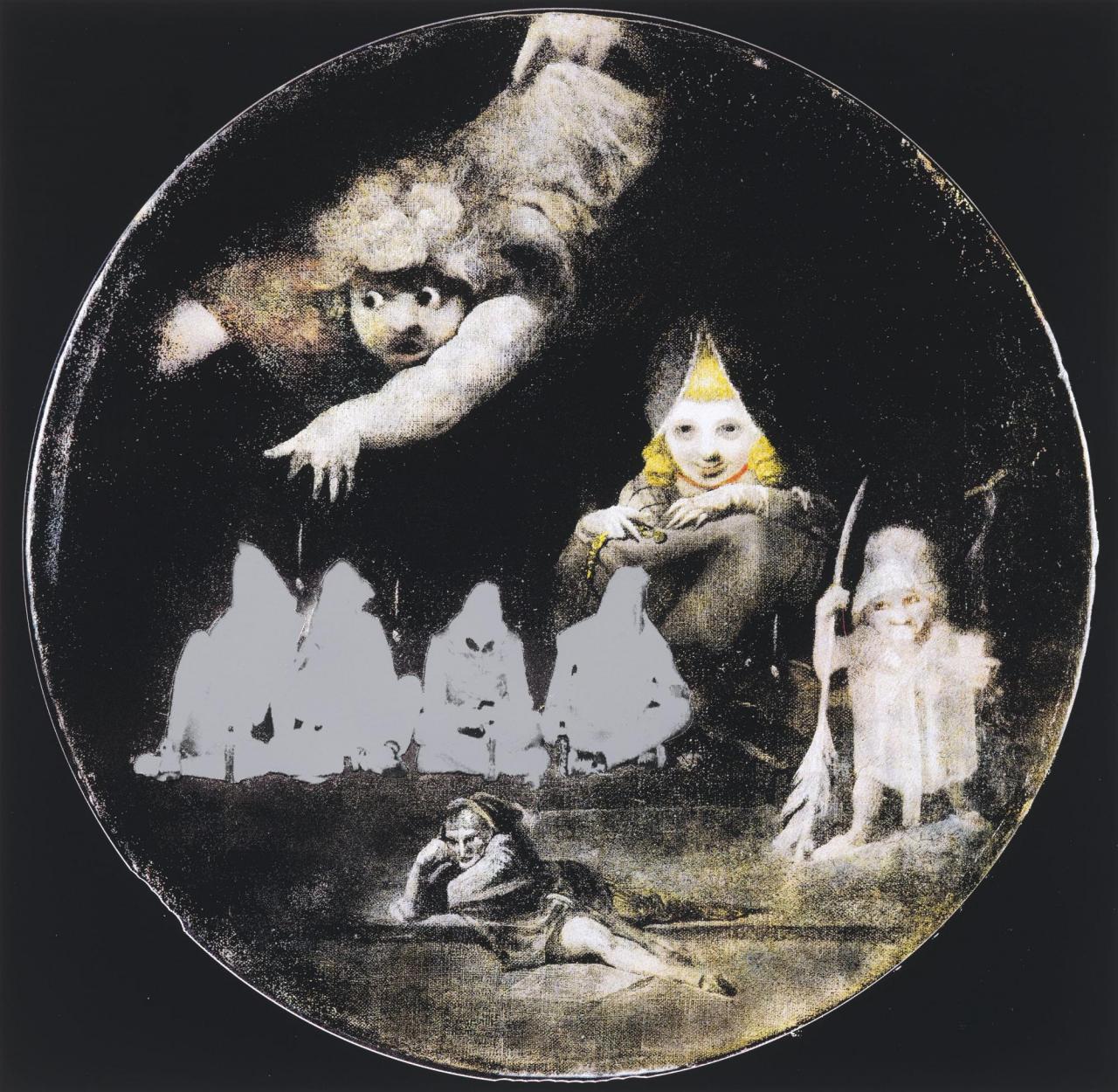 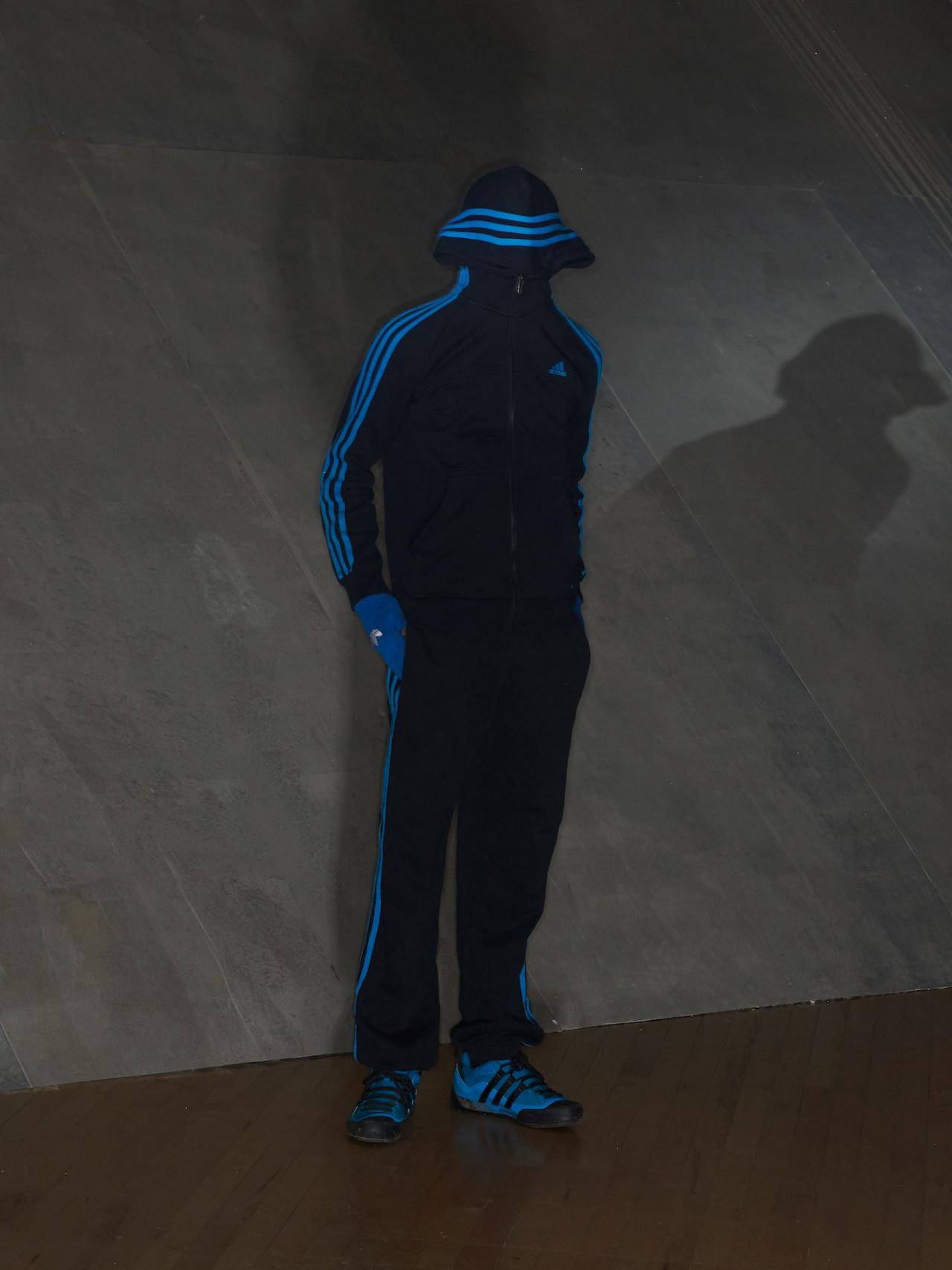 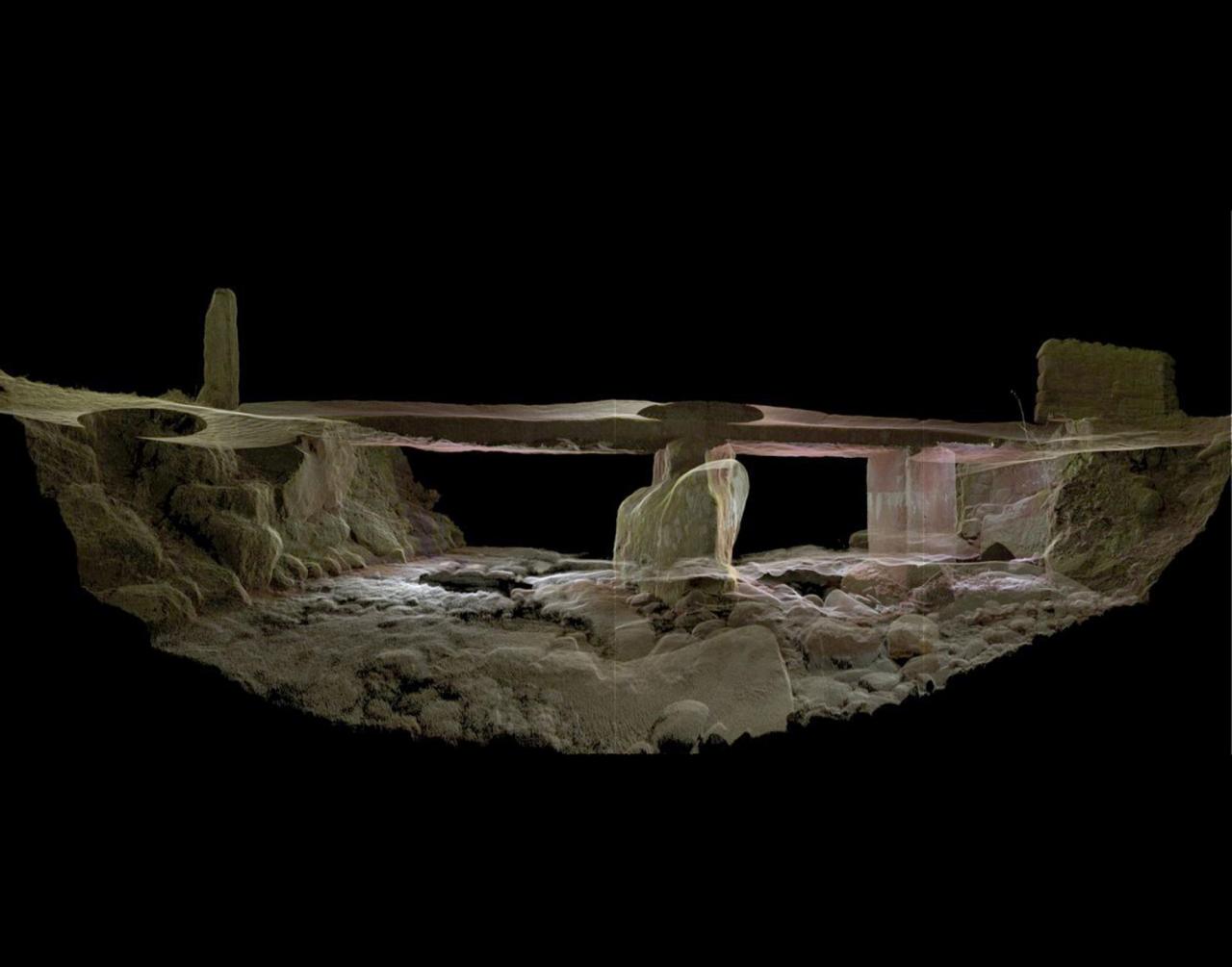 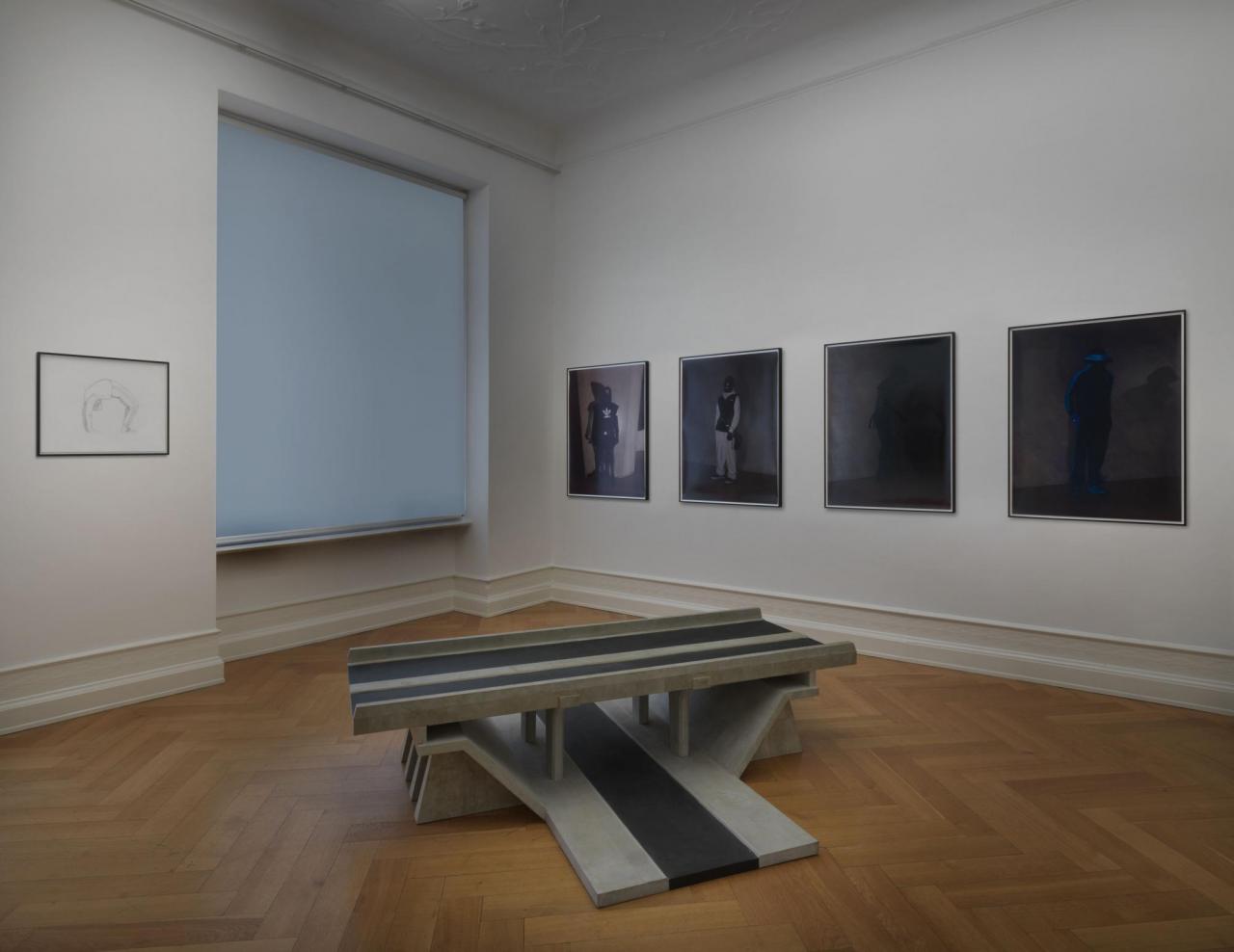 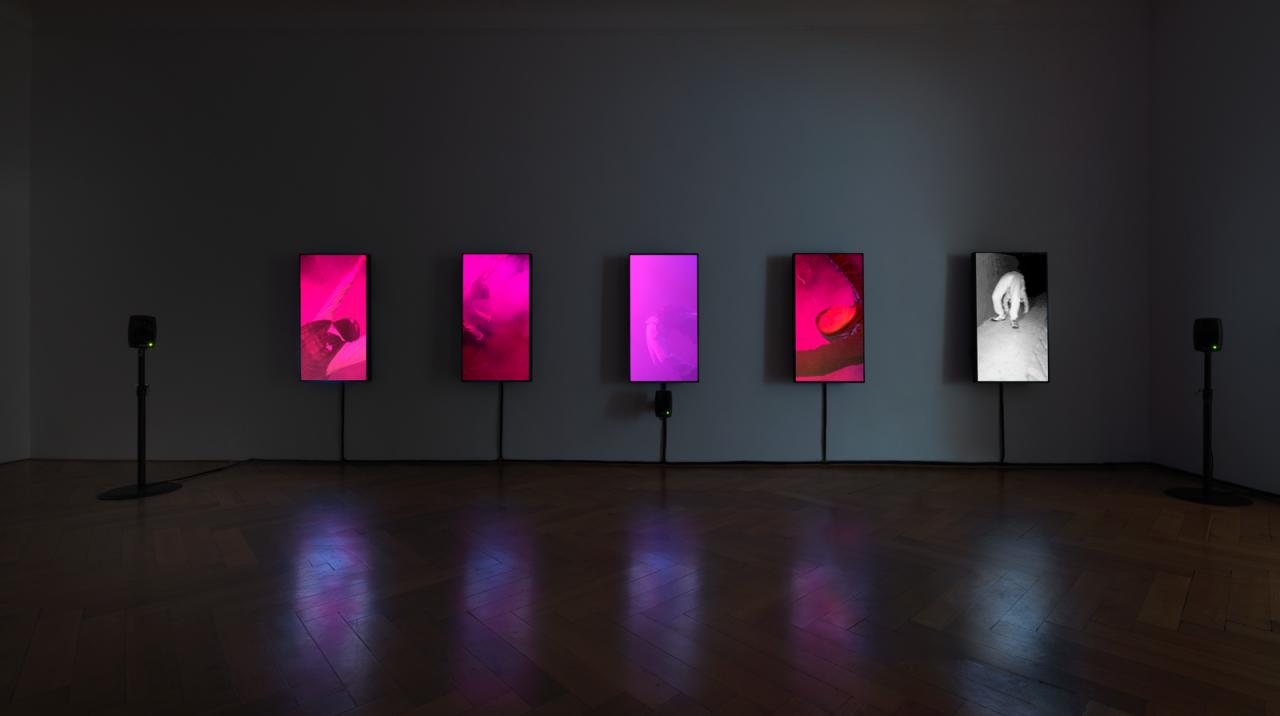 A pensive Harlequin. The ghost of a friendly imp. Goldilocks peeking through a black curtain. Four anonymous silhouettes. An angel falling to earth. “O’ Magic Power of Bleakness”, Mark Leckey’s latest exhibition at Berlin’s Galerie Buchholz, first introduces itself through these eight characters. In a foreboding silkscreened image near the gallery’s entrance, four silver outlines of what seem to be actual people appear in the process of being transported into a kind of cartoonish spiritual realm, landing among the storybook figures surrounding them here. But where and how did their planes of reality merge?

In the next room, Leckey starts to untangle this mystery by introducing the setting of their spiritual “breakthrough” moment: the Eastham Rake M53 motorway bridge outside Liverpool. A model of the bridge sits at the centre of the room, surrounded by glossy portraits of five boys, still fully grounded in our familiar material plane of existence. The bridge itself is as much of a protagonist of his highly personal narrative as any of the boys on the wall: as a kid, Leckey would spend the afternoons playing underneath the M53 overpass with his friends. (To those who were raised in cities or born after the 1990s: let it be known that growing up rural feels like being stranded on a desert planet whose main attraction is an abandoned former bowling alley.) The setting, desolate as it may seem, is anything but imaginatively-void. When the British artist was about eight or nine years old, just a few years younger than the boys featured in the portraits, a fairy appeared to him in a vision induced by – or at the very least, under – this bridge. She giggled mockingly at him, Leckey still remembers clearly, even after decades of retelling this story have clouded his memory of the incident.

The glossy flash photographs of the masked boys under what looks like a larger replica of the M53 than the one housed here – probably the life-size one Leckey premiered at London’s Tate Britain during the first rendition of “O’ Magic Power of Bleakness” – provide the corresponding religious iconography. Created in collaboration with Bristol-born fashion photographer Johnny Dufort, the four portraits show what look like stand-ins for the artist and his friends. Dressed in high-tech brand name sportswear, equipped with fanny packs, gloves and running shoes, their identities remain concealed behind balaclavas, sunglasses and hoods. The only way to identify them is by the Adidas stripes on their pants and the Nike swooshes on their sleeves, nods to the specific dress codes of boys their age (logomania also features into the video at the heart of the exhibition), but that’s a few steps further into bro culture than I’ve ever ventured, so their meaning is a little bit lost on me. So their dedication to anonymity is the most interesting feature, by my assessment, even as the emphasis on the brands they’re wearing ends up giving these pictures an advertorial character. It stages a tricky paradox, all feeling somehow expository: if their concealed identities were the point, wouldn’t that kind of negate the idea of posing for a portrait in the first place?

Partially obscuring the next doorway, the same image from the beginning of the show – four figures in transit to some ghostly plane – reappears in the form of a 300 x 300 cm mural on a temporary wall, beyond which one finally reaches what feels like the core of the exhibition. The two remaining rooms of the gallery are dedicated almost exclusively to Under Under In (2019/2021), a video installation on six screens: five mounted vertically next to each other, one horizontal on the back of the temporary wall.

Under Under In is a retelling of Leckey’s by now thoroughly mythologised under-the-bridge vision of the mischievous fairy. On six screens, a group of young boys dressed in reflective gear point their (smartphone?) camera flashlights at the walls and floor of the concrete structure, at each other, and at branded spray cans scattered all around. Interspersed are text messages, infrared images of the group from an outsider’s perspective, and, here and there, the screens go dark for a moment. The sixth screen, when it shows anything at all, seems to only depict the group as a whole, as if from the fairy’s perspective. In a voiceover, the adolescents narrate their experience. Their words, like the videos’ editing and press materials accompanying, are trippy – take this passage, occurring imminently after one character returns from following the fairy into the spirit world:

We’re on a stone island.

DON’T FUCKIN’ BEEP AT ME.

Move on you dickhead!”

Somewhere between an invocation, ad-speak, stoner talk and motorway madness, the lyrics mash up fantasy and reality, several timelines converging. One character says he’s seen this bridge built seven times. Another proclaims, upon his return from God knows where, that he’s been gone for forty years. “I wanna get off and leave this place”, knows yet another. One friend’s identity is confused; “Is he speaking Goblin?”, another wonders.

“And then he goes, ‘I am here in the place of the friend that left.’ And then he’s all like smiling and that, and then he’s like, ‘Me who is not me.’”

Much of the text’s vocabulary and rhythm read like references to folklore – like one long poem, with no characters assigned to any specific lines. Sometimes the friends speak; at others, it’s otherworldly goblins, fairies, spirits, … But neither the text nor the video installation’s sound design really focus on narrative – which admittedly might prevent the viewer from fully immersing herself or understanding the work on a personal level. But maybe that’s by design? The experience of Under Under In is more about free association, which, as a concept, suits the psychological and sensorial experiences of the in-between states it depicts.

While “O’ Magic Power of Bleakness” as a slogan perfectly, poetically captures the essence of growing up in the dreary outskirts of a rather small town, the exhibition on the whole felt a bit like going to church – as in, it offered, primarily, a second-hand mystical experience. The core of Leckey’s fascination with this particular moment remains quite abstract, but then again, that mystery might be exactly why the artist revisits, in so many ways, this parable of his own pre-adolescence.

BIANCA HEUSER is a writer living in Berlin.