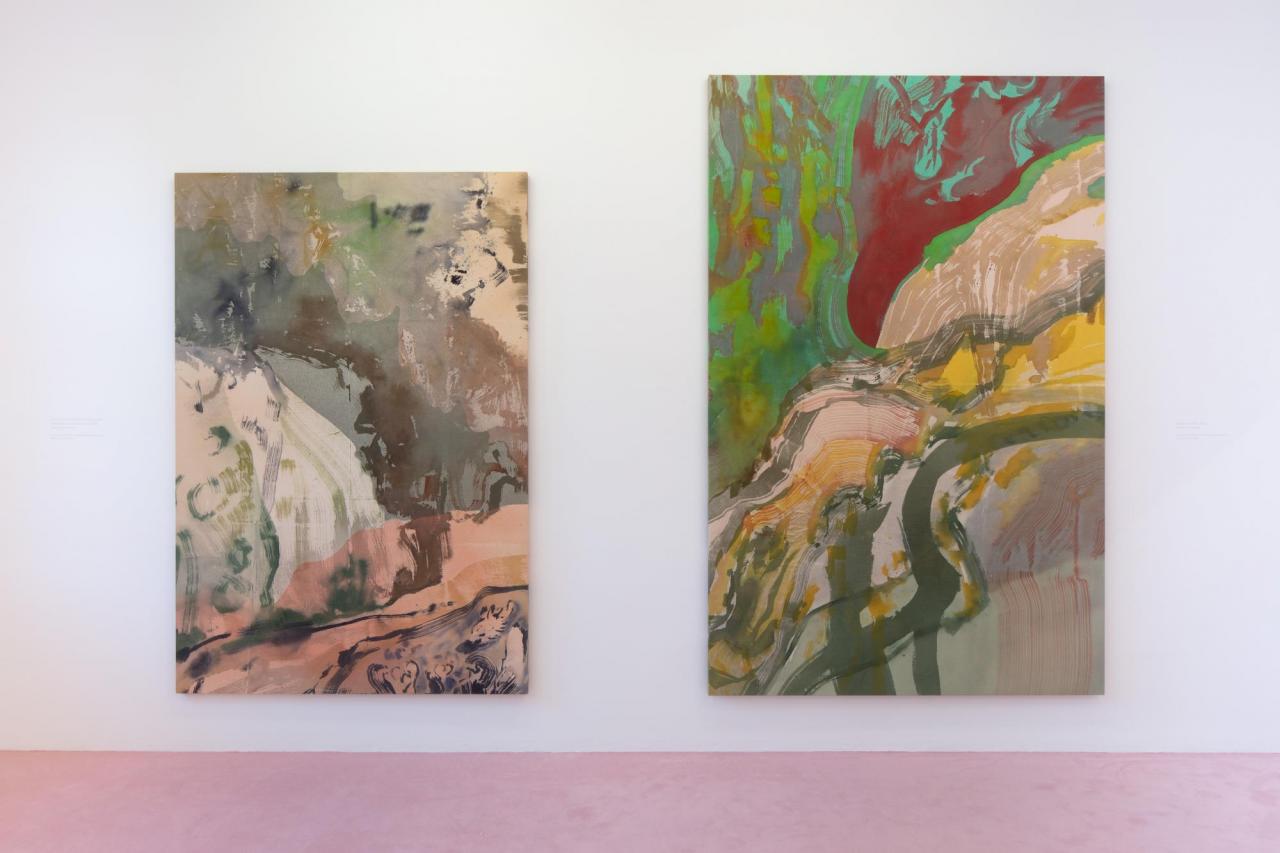 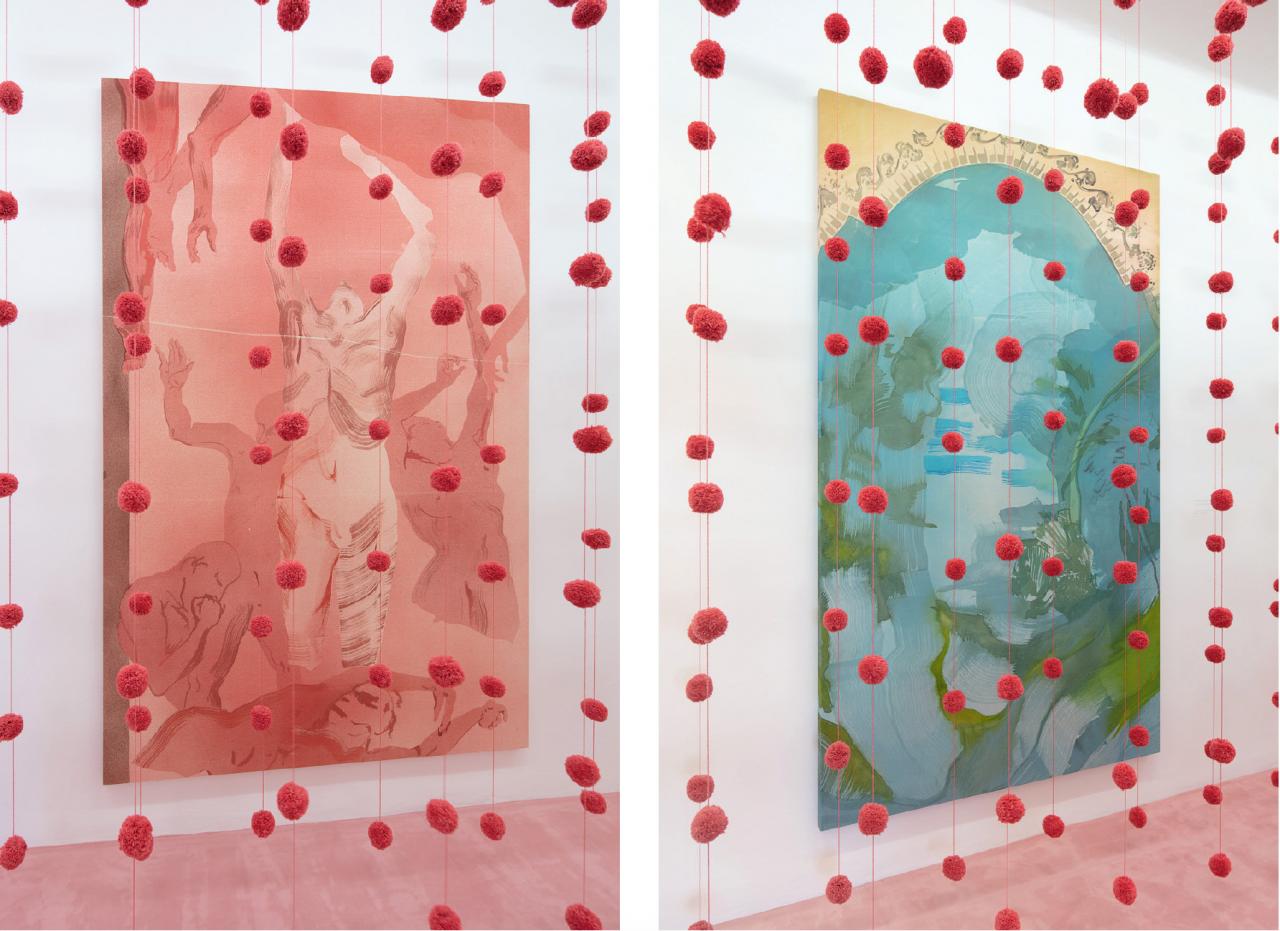 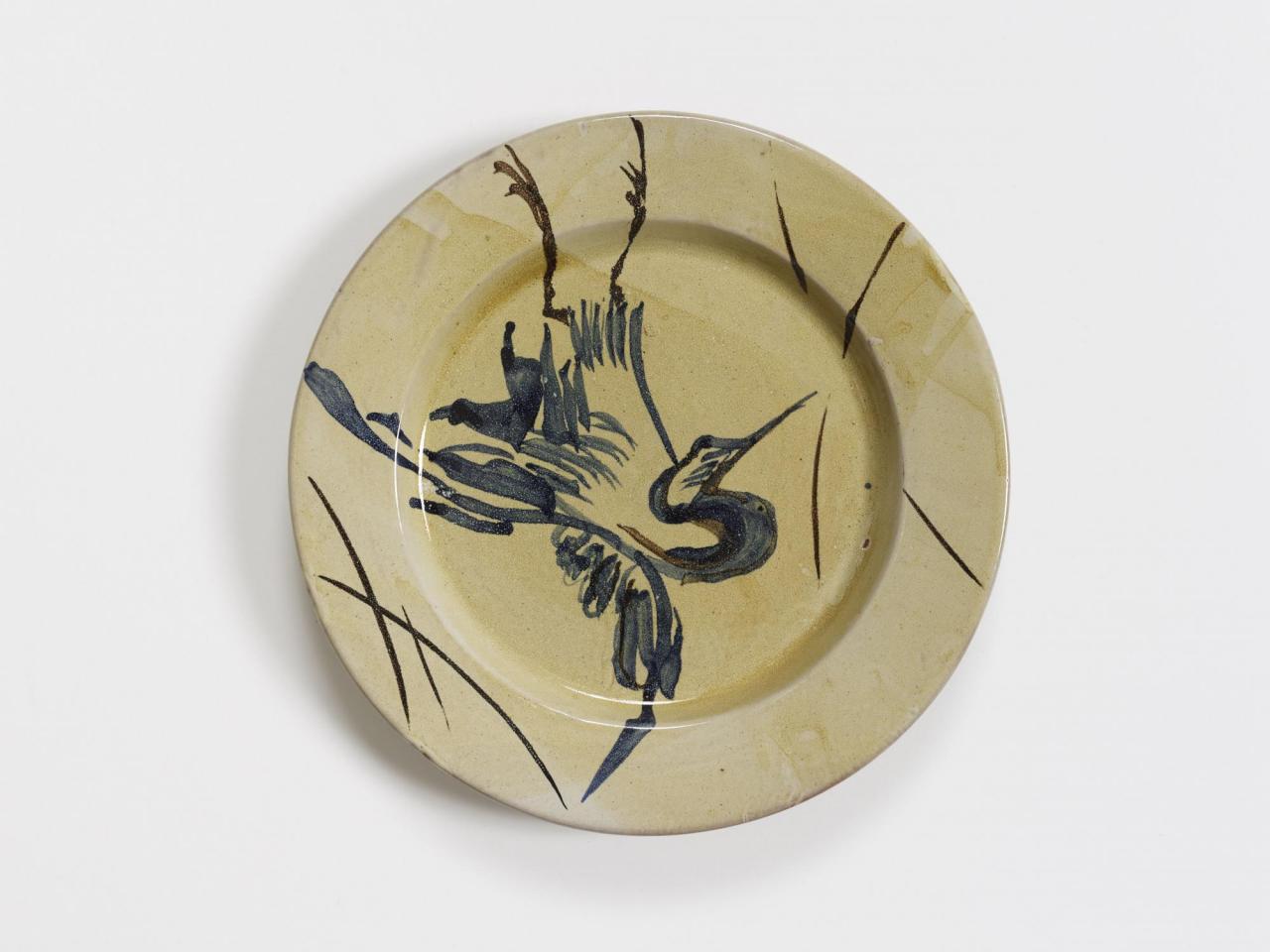 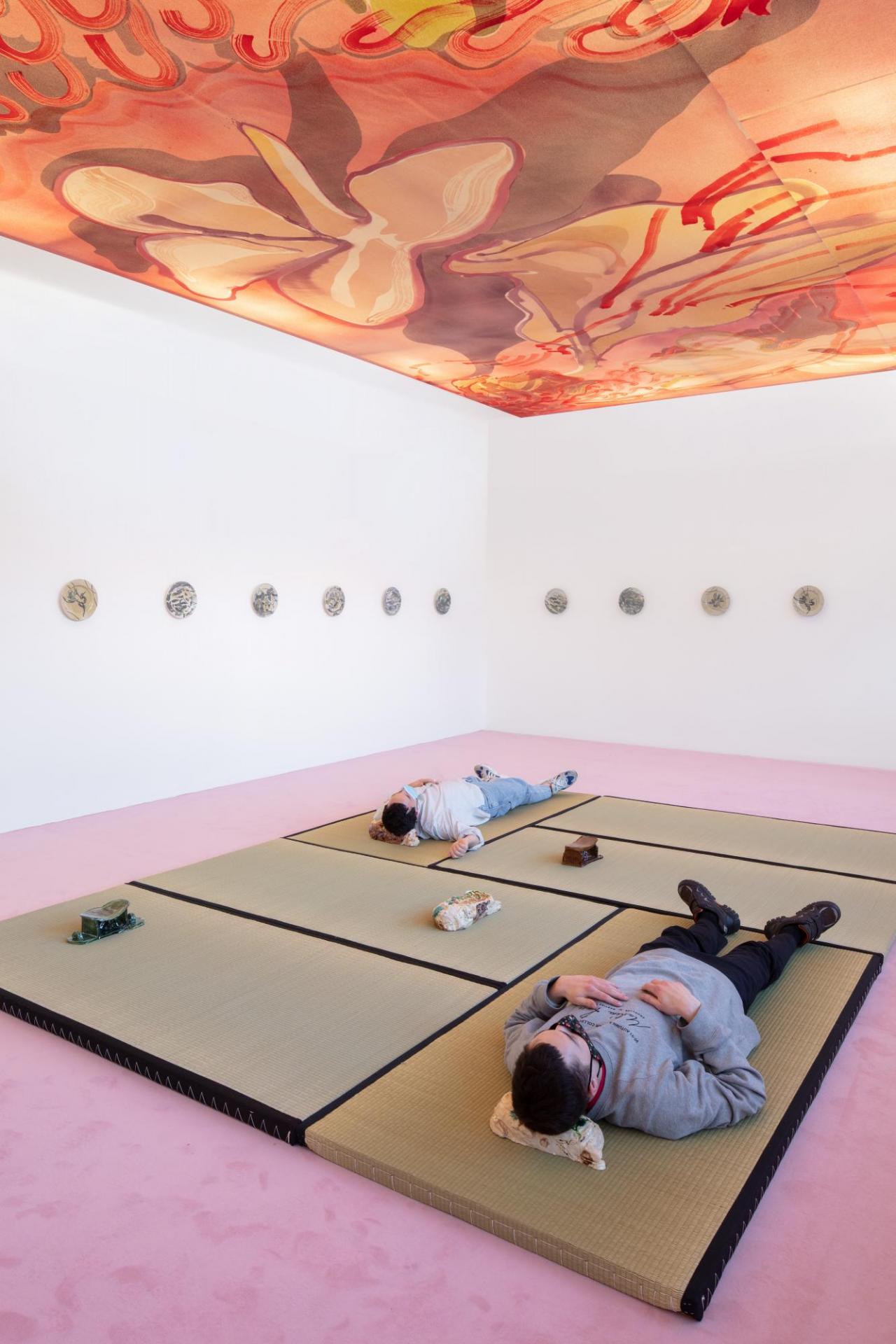 The Paris-based painter Matthew Lutz-Kinoy’s show at the elegant Museum Frieder Burda Salon Berlin is a pink paradise, the floors and corridor covered in soft, rosy tones. Lutz-Kinoy laid down a carpet throughout the space, and lined the central passageway with floor-to-ceiling strings with hanging pompoms at well-spaced intervals (An opening of the field, 2020), which frame this long, white space. They fall playfully in front of the paintings that hang on their walls. There are nine paintings in all, each acrylic on canvas, including the largest of the works (Wings of Flamingos, Camargue, 2020) that is floated just over the neon tubes on the ceiling, facing the carpeted floor of one of the adjoining rooms. Under the pink flamingos is a rectangular arrangement of tatami mats, where viewers are invited to lay down and rest their head on one of Lutz-Kinoy’s ceramics from 2018. The walls of this room are lined with a set of twenty glazed ceramic plates (Keramikos 3, 2019), which create delicate correspondences with the hanging painting, and are best to take in from the comfort of the floor mats.

Other painted works are large and gestural, where figures are often presented in outlines, and swathes of wavy brushwork occupy the field of vision. In one work, we see Greta Thun- berg (Thunberg Greets the Nations, 23 September, 2019, 2019) depicted as a small child with paintbrush and can, her back turned to us, cowering before a group of large, leering male figures approaching, an allusion to Thunberg’s speech to UN world leaders in Septem- ber 2019. In this painting, as in several other canvases, framing devices are key.

Here, men are both tough and tender, beautiful and base, stripped down to silhouettes.

In addition to contemporary figures like Thunberg, Lutz-Kinoy pulls from art historical references here too, like in The Ray (2019), which replaces the central figure of Jean Siméon Chardin’s 1729 still-life of the same name, with an outstretched nude male instead of the lacerated fish that hangs with an eerie expression on its face in the original. The inspiration is more than mere citation, as Chardin’s ray opens itself, bloodily, to the world before it in the scene, and before our eyes as onlookers. The orientation in Lutz-Kinoy’s The Ray is not outward, but heavenward, gesturing to the air above. This alignment with the sky is pictured over and over again, giving concrete voice to the show’s title (“Window to the Clouds”).

Like the pompoms, the resonances are both formal (splitting open) and convivial (we’re invited to the party), making the work of pictorial composition into a larger installation in which viewers are welcomed – to see, take in, and be reminded of the playfulness that such works can offer. In other words, taking in the show as a whole is a way to train the eye for what comes next in the paintings and ceramics. They are not just situated anywhere, but within the rosy rows before us, itself a framing mechanism (it’s no wonder that none of the paintings have any kind of frame around them, this would defeat the interplay that Lutz-Kinoy so thoughtfully choreographs).

Here, men are both tough and tender, beautiful and base, stripped down to silhouettes, full of colour and possibility. That future is still open, but nonetheless shrouded by death, thinking back to the gutted corpse of Chardin’s ray, or similar poses of ancient sculptures of Marsyas (like the Chardin, also on view in the Louvre). On that note, Lee Edelman’s No Future: Queer Theory and the Death Drive (2004) came to mind, in particular, one passage on Alfred Hitchcock’s The Birds (1963) where Edelman writes of the unpredictable, arbitrary flight of the titular characters: “They come, that is, to trace a connection, as directly as the crow flies, between ‘disorder in the family’ and the rupture, the radical loss of familiarity, unleashed by jouissance.” Stepping into Lutz-Kinoy’s universe comes with both love and loss, of flowers, animals, and the human soma, preserved and presented in all their fragile beauty.

View of “Window to the Clouds”