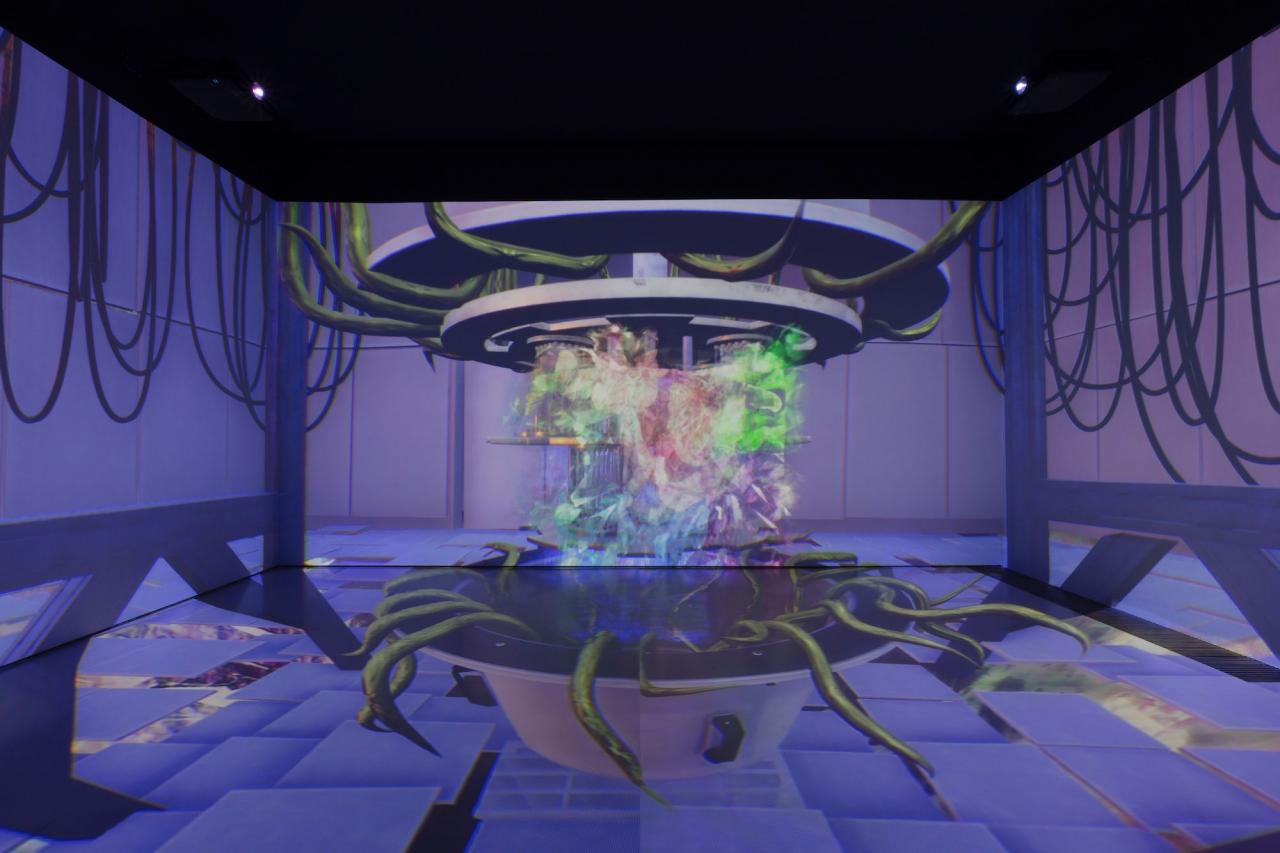 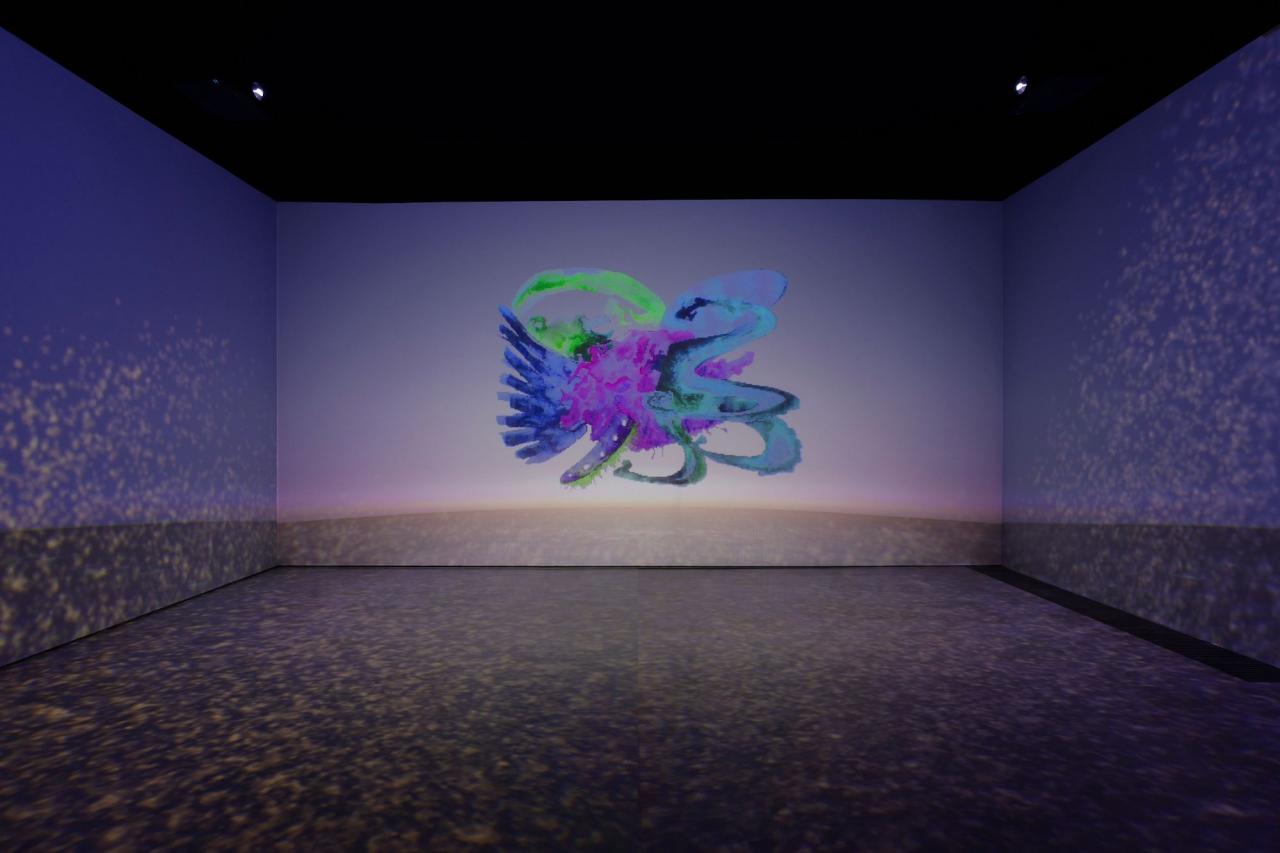 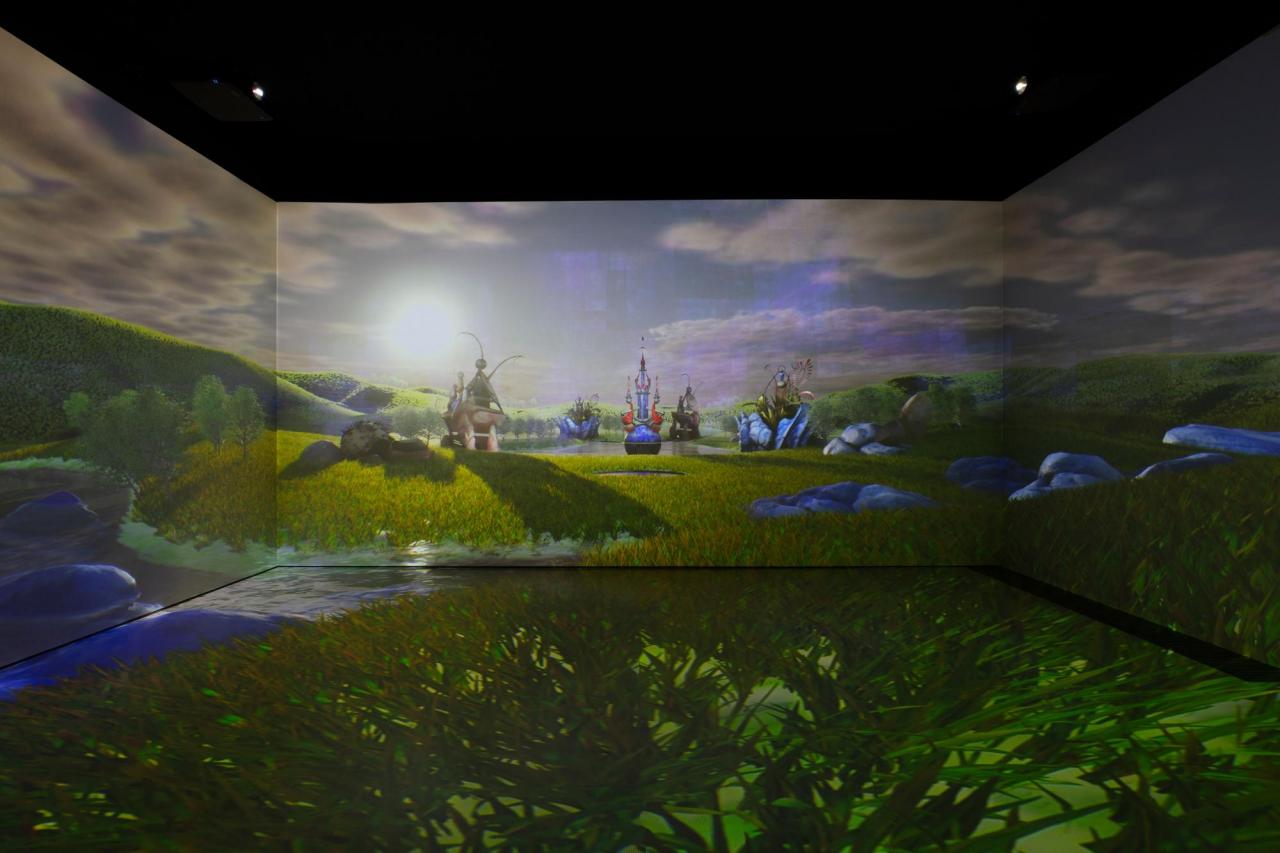 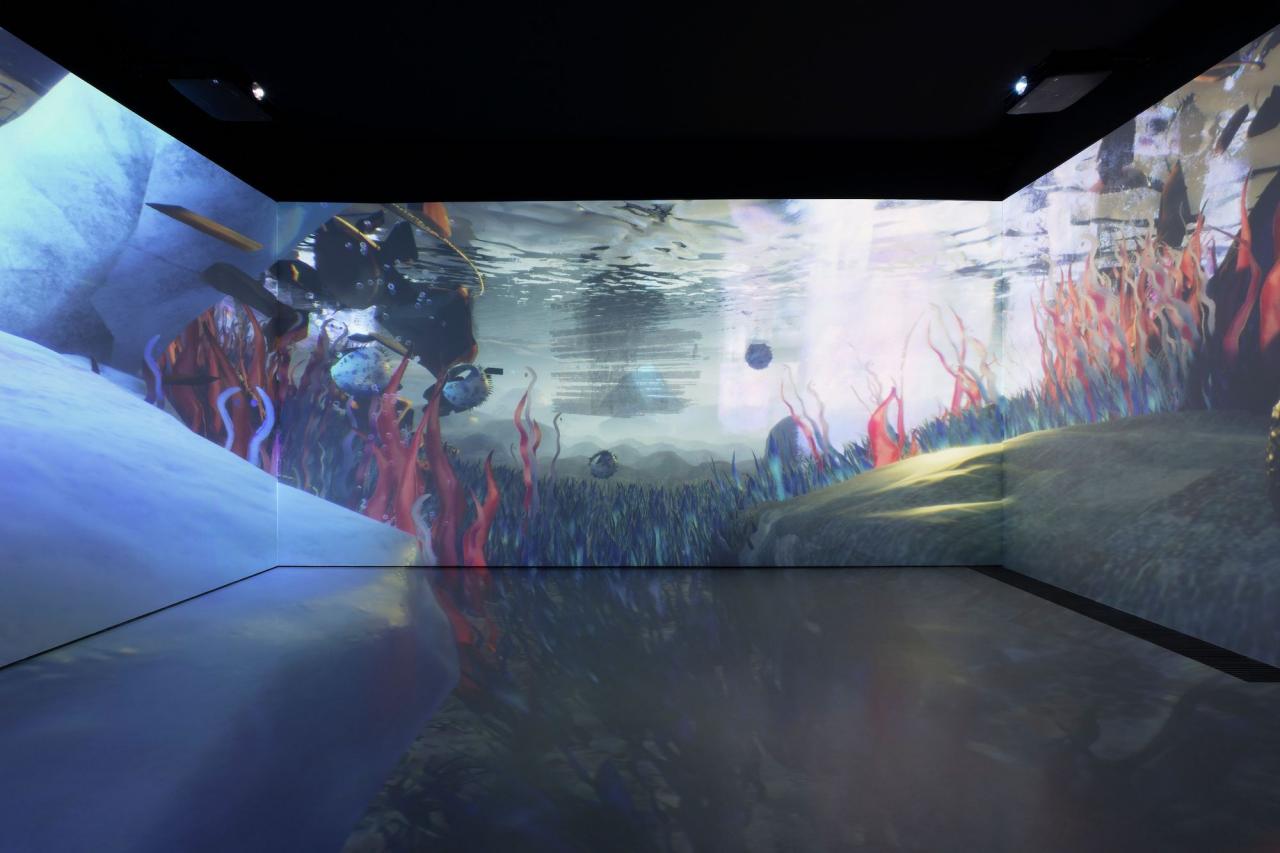 Scientist-turned-artist Libby Heaney’s latest immersive installation, Ent-, takes entanglement as both its method and subject matter, pushing computing beyond the binary. She speaks with Adina Glickstein about what quantum even means, how it can be made more accessible, and the feminist possibilities that its essential plurality unleashes.

Adina Glickstein: How did you come to make Ent- – retrace the process of dreaming up, conceptualising, and executing the work for me, please! Have you always been a practicing artist? What’s your background in science and tech?

Libby Heaney: Before retraining as an artist, I gained a PhD in theoretical quantum information science and completed three post-doctoral fellowships. I was totally fascinated by quantum entanglement – a basic ingredient of quantum computing – and the weirdness of quantum mechanics, but over time my day-to-day research became a bit dry. I was also concerned about the lack of critical discussion around the wider impacts of these powerful new technologies. I’ve always loved art, and would have happily undertaken a fine art degree at eighteen if I’d come from a wealthier background. So as the magic of my existing research faded, it felt like the right time to retrain as a visual artist. Now I can dream up new worlds, weaving together facets of quantum computing and quantum physics with aesthetics, ethics, and other discourses that working with art uniquely enables me to approach.

To make Ent-, I was first approached by LAS to understand how quantum computing could be used in visual art after their director, Bettina Kames, saw a talk I gave at Sonar+D in Barcelona in 2019. At first, I didn’t know what visual effects I could make using quantum computing, but given my background in entanglement, I knew I would try to reveal its strange, wavelike, multidimensional behaviour by manipulating images and 3D models with data. After lots of research and some failed experiments, I developed a new visual language where digital images become plural and interfere with themselves; where unusual patterns emerge from the sea of quantum noise and where 3D models dissolve, expand and morph into weird new forms; this “quantum aesthetic” reveals the pluralities at the heart of all matter.

I developed the concept of Ent- by thinking about what I call the double-edge of quantum computing, which to me highlights how the future of this technology might be used for good, to see the world in new plural ways beyond the binary; or bad, to further entrench the biases and inequalities baked into existing digital and AI technologies. I then started working with a team of Unreal Engine developers to build the final 360-degree projection that characterises Ent-’s current form.

AG: What exactly is a quantum computer? How is it different from, say, the laptop I’m using right now?

LH: A quantum computer processes information following the laws of quantum physics rather than Newtonian physics (which underpins all our digital devices). Quantum physics is really weird, as it allows objects to be doing multiple things at once – so if a football were quantum, it could spin forwards and backwards at the same time, or end up in both goals simultaneously. This multiplicity enables information to be processed on a quantum computer in parallel, versus digital computers, which can only process information sequentially. Certain algorithms important for cryptography, optimization, and unindexed searching can then run exponentially quicker. A problem that might take thousands of years to solve on the best digital supercomputer might only take a few days on a quantum computer. Full scale quantum computers do not exist yet, but big tech companies and national governments are pumping billions of dollars into the area in hopes of developing them.

AG: Can you elaborate a little on how computation works with binary code – and why it matters, for your work, that quantum states trouble this binary?

LH: Digital computation is based on the binary counting system of 0 and 1. Physically, a “bit” (or unit of information) is represented by the voltage in a transistor, which can be low voltage, representing 0 or high voltage, representing 1. It's not possible for a single transistor to be both high and low voltage at the same time. This ontology points us to a mechanical way of seeing the world, where entities have their own fixed properties or truths existing independently of their relations to other things. As a worldview, this feels very rigid and outdated – we desperately need a new model of reality where we can reimagine the interconnection between all things.

In quantum computing, a quantum-bit (or qubit) can exist in both 0 and 1 simultaneously. In fact, an infinite number of different combinations of 0 and 1 are possible, which can be hard to think about because we’re so used to Newtonian thinking. Different possibilities are revealed, and others are destroyed, depending on how these quantum particles entangle (or not) with other systems. This way of being breaks down the illusion of absolute truth in the strongest possible sense. For me, this is a step forward in understanding ourselves, the world, and our place in it in new plural and relational ways – for instance, in relation to the climate crisis, which demands that we think about this kind of inextricability.

AG: How else is quantum computing being used today? I gather it’s not just artists. In its current applications, is it shaping up to be merely another potentially-radical technology monopolized by a powerful few, as you alluded to earlier?

LH: Exactly, quantum computers are being developed by big tech companies and a myriad of start-ups. They’re currently being used for research in chemistry, and to solve optimization problems (such as oil routes!), and to accelerate the training of current machine learning algorithms, but they haven’t yet established a clear-cut advantage over digital computing because, in their current forms, they are very error prone.

IBM offers open access to some of their smaller 5-qubit machines via the cloud, but generally, companies who want to use quantum computing must pay huge amounts – I have heard rumours of different figures, for instance around £10 million per year for commercial use. This is obviously prohibitive for most companies, and certainly for individuals and artists.

I have to admit, I am in a privileged position because I have good contacts at quantum companies due to my science background, and I’m fortunate to know how to programme the machines so I don’t have to rely on “out of the box” code, which might not be conducive to creating anything visually interesting. But this depth of involvement enables me to raise questions around ethics, access, and literacy. Hopefully, I can spark further debate about these issues inside and outside the communities currently engaged with them. Imagine the radical outcomes that could come to fruition if artists were developing these machines instead of big tech?!

Also, this is why connecting my concerns around quantum computing to a religious triptych like Hieronymus Bosch’s – as I do in Ent- – highlights the dogmatic, powerful, almost god-like position big companies are in when it comes to the development of these technologies.

AG: Right, many of the motifs in Ent- are drawn from the central panel of Bosch’s Garden of Earthly Delights. That panel in the Bosch painting represents the realm between heaven and hell. How does the content of your work relate to this interstitial space?

LH: The future of quantum computing is uncertain; it’s unclear which way – heaven or hell – it will go.

Ent- opens with an all-seeing, gleaming quantum computer in the heavens pulsating with strange hybrid creatures (themselves animated through quantum data). The viewer then falls towards earth, only stopping to become entangled with teleporting creatures, gradually dissolving and being sucked down a surrealist plug-hole into the central panel of Bosch’s triptych.

The next scene is set in the lush garden, devoid of humans except the audience’s physical bodies in the gallery itself.  Then, at a random time later (it varies every time the work restarts), these breathing, shifting architectural forms collapse into ruins, the bass rumbles and the colours desaturate: it becomes an immersive hellscape. Through the unpredictably-timed collapse, the artwork has its own agency – it doesn’t give itself freely; it pushes back against the viewers. Our desire for new technology – whether quantum computing or new modes of immersive art – is questioned with this gesture.

AG: From its choice of media – watercolour paintings and quantum code – to its title, Ent- seems to dwell a lot in merging, in states that run and knot and bleed into one another. In short, in entanglement (which the work’s name references, among other possible ways of completing its open-ended prefix). What does it mean, to you, to be “entangled”, and how might it have political implications, as you touched on before?

LH: For me, like the merging or blurring used across my works (not just Ent-), entanglement is a material process where one loses their own identity through relations to others in the strongest possible sense – so if someone tries to retrieve an individual, they end up destroying the entire system. This is literally how entanglement in a quantum computing functions, but it’s also a post-human feminist model of the world and of conceiving our place within it.

One of my favourite authors, Karen Barad, speaks about entanglements in relation to ecologies and responsibility. The nonlocal nature of entanglement – which is to say, entities can still be entangled even if they’re really far apart – leads to a more expansive sense of responsibility, where our actions and discourse matter within (inter)planetary phenomena, even when we consider “others” that we’re not directly in touch with. This idea seems particularly important in our digitally-connected world. Across my work, I’ve been experimenting with quantum computers as a material basis for actualising ideas like Barad’s, enabling a queer reinterpretation of images, spaces, and the bodies that inhabit them.

LIBBY HEANEY is a British artist and lecturer who holds a PhD in Quantum Information Science from the University of Leeds and an MA in Art and Science from Central Saint Martins in London.