Mask On, Mask Off
by Natasha Stagg 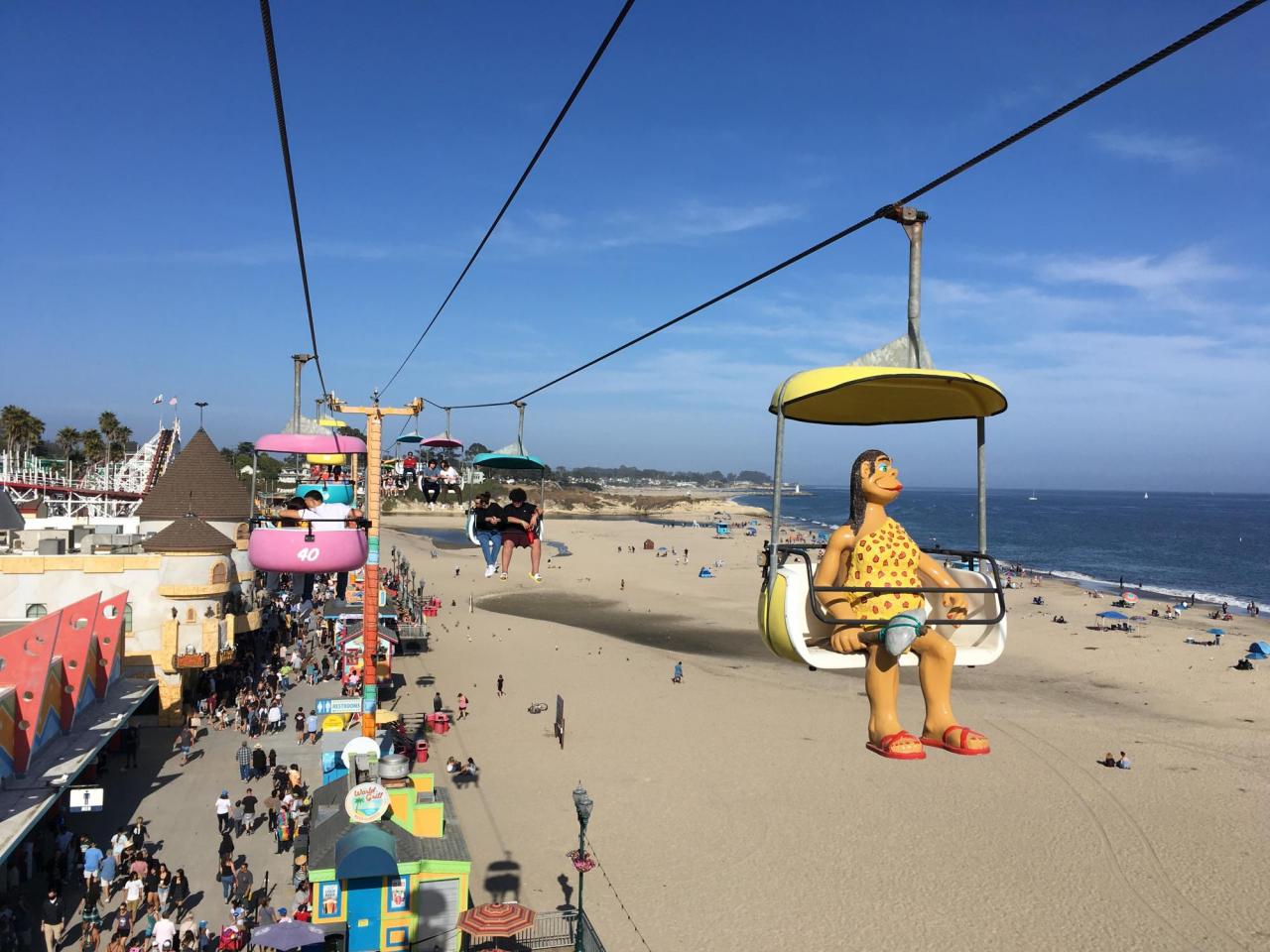 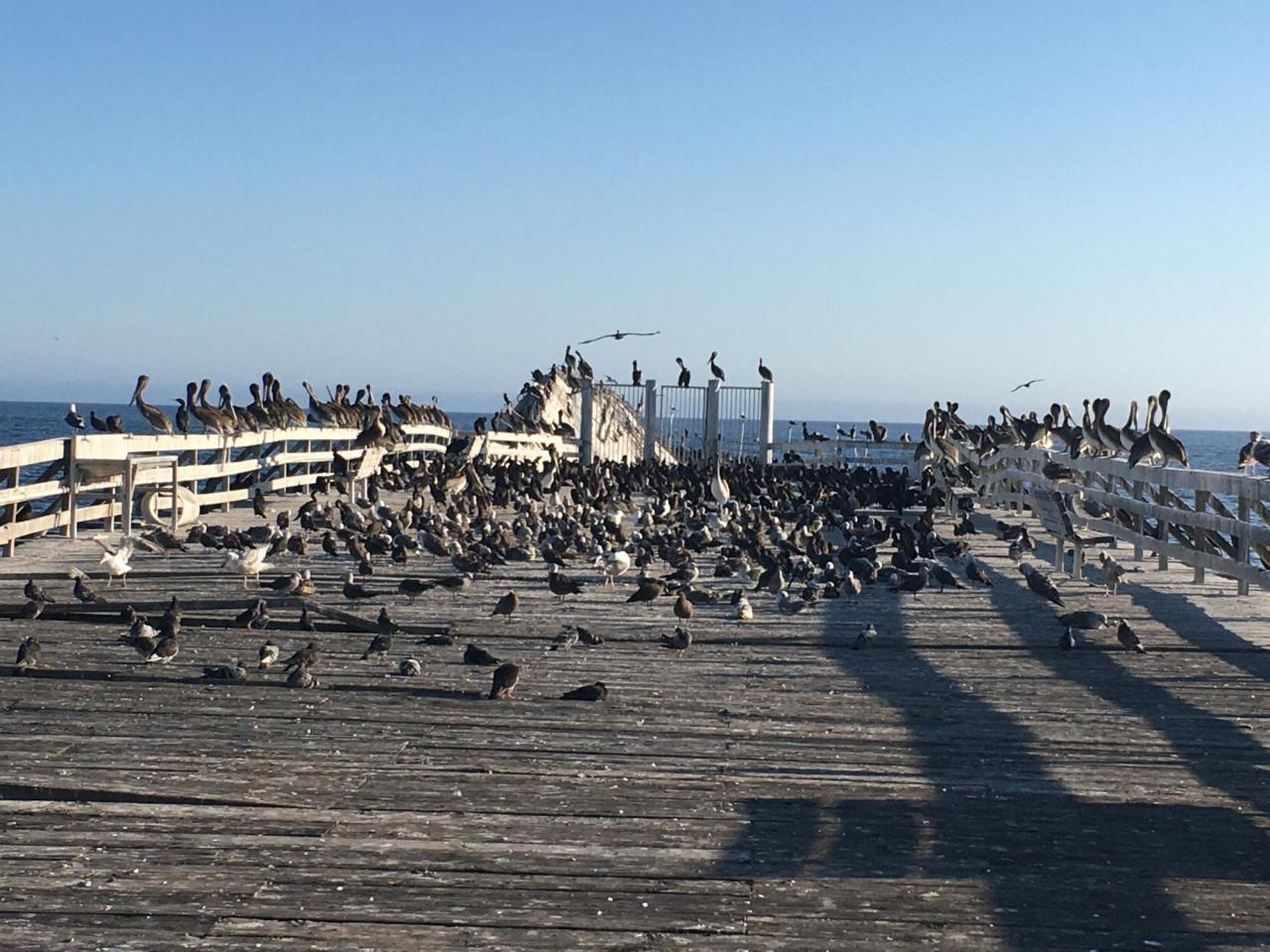 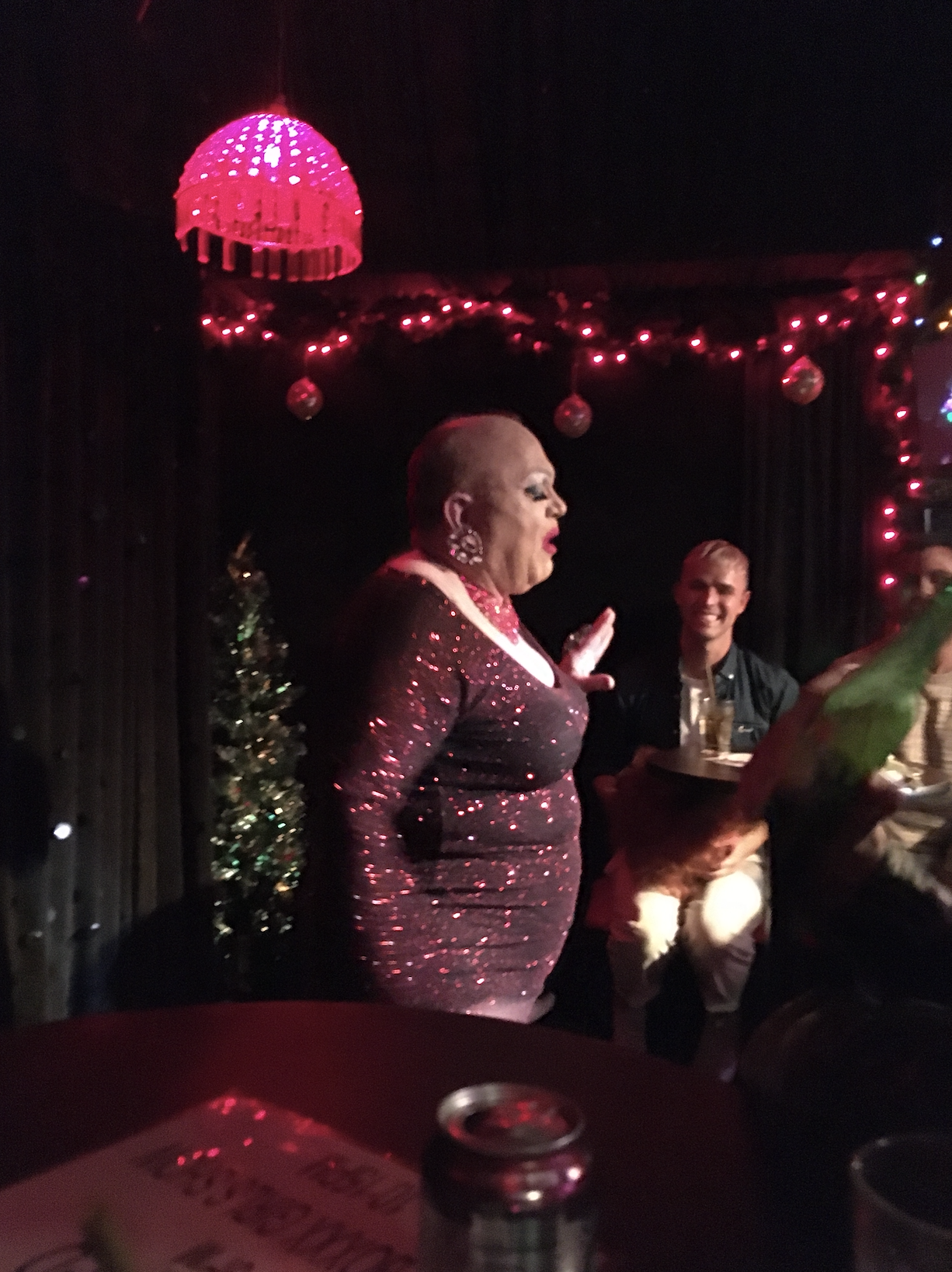 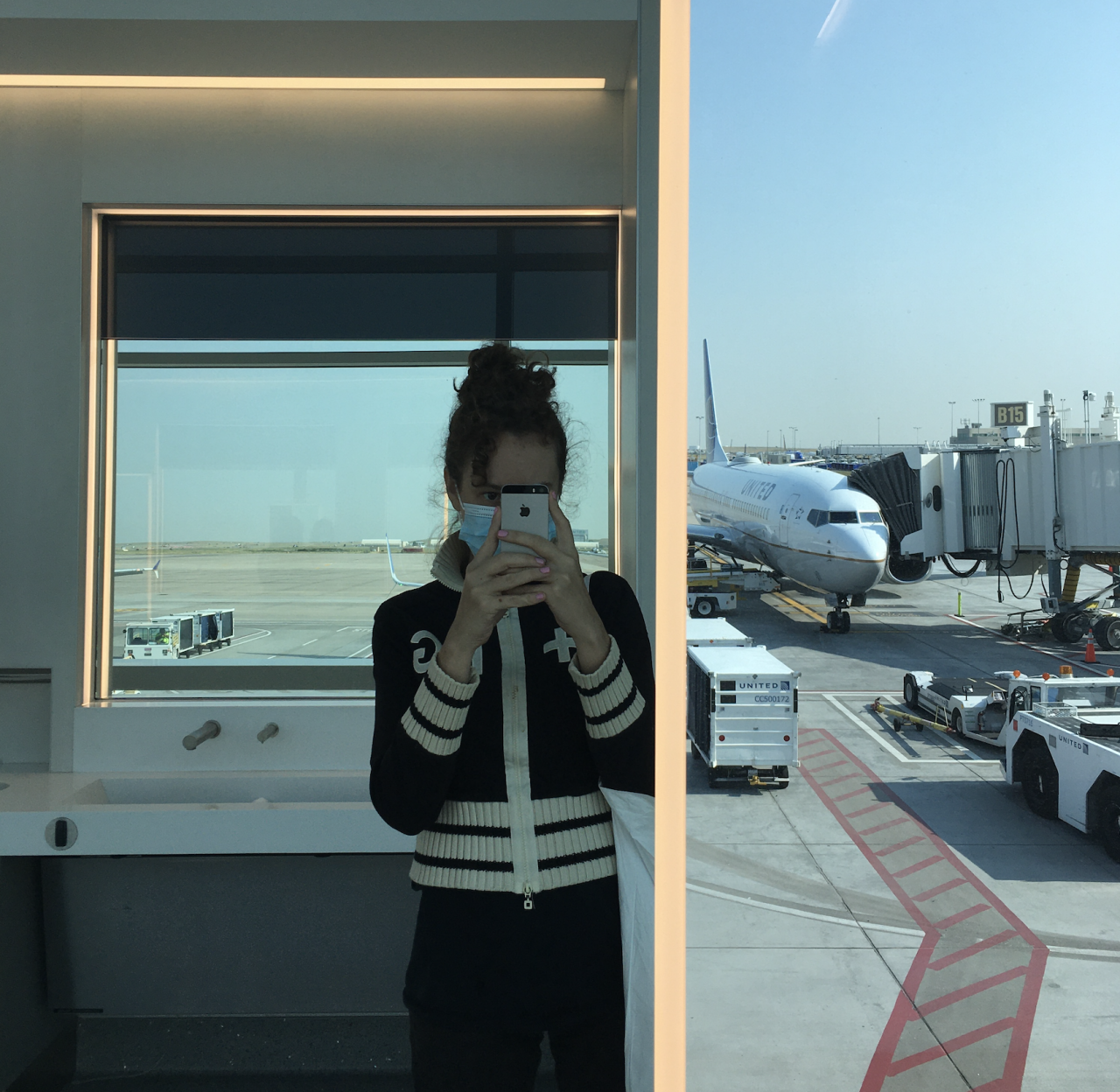 I am on the West Coast, wearing a sweatshirt and shorts, getting on as many rides as I can before the Santa Cruz boardwalk closes, again, eating farm-to-table on the sidewalk, reading a book I found in the Airbnb while a hummingbird circles my head, listening to a college radio station in a rental car that I cannot drive. There’s a Mark Twain quote about never feeling colder than when he’s in San Francisco, my friend says, and I understand it now, sort of. Everyone keeps asking us why we are wearing jackets. I buy a sweater at a thrift store because I feel I need it at that moment and some girls in tank tops next to me say they cannot even look at the sweater section, it’s making them feel sick because it is so hot out.

Avoiding the virus is, again, a complicated game. At a family reunion (not my family), the overwhelming sentiment is that if you haven’t been “fully” vaccinated,” you’re “an idiot” and perhaps “deserve what you get”. I know you don’t want to hear what I have to say about this, and believe me, the feeling is mutual. Staying objective about these matters is of utmost importance, in my mind. When someone at my table says, “I don’t know how this of all things, became political”, my thought is, yes you do. I do not say anything. I tell my boyfriend that I’m going to get a refill. Allow me, he says, and I don’t allow him. I’m already out of my seat.

For context: many friends and acquaintances of mine have contracted Covid19 after getting two doses of Pfizer or Moderna vaccines or a single, potent dose of Johnson & Johnson here in the States. This kind of thing, as you might have guessed, is not being covered on the nightly news. To be clear, I understand, yes. I swear, I do. I mean, I don’t because no one really does, but yeah. At a Californian’s first restaurant dinner in over a year, I say something like, “I have never gotten the virus, which is the measure that matters most”, to which she snaps, “I disagree”. I am still thinking about what she possibly could have meant by this.

I assumed that “the gay cold” was just a catchphrase pertaining to the inevitability of getting an airborne illness upon reentering parties like those hosted during Pride after so much coddling of our immune systems. No, someone corrects me, it is something specific, pneumonia-like, and dangerous. Office life has changed so much, my friends tell me. Bosses respect the notion of “staying home sick” more than they did, and everyone is allowed to work from home on Mondays and Fridays. Or, at least, they will be able to, soon. I won’t believe it until I see it. It seems like most of the world is back to five days a week and traveling to Asia and Europe for meetings.

Nothing has been invented yet that imbues us with immunity. We have always known this, and yet, we have a strange way of showing it.

When I walk into a store and put my mask on, others are proudly taking theirs off, and I realize that this gesture, which used to indicate one thing, indicates something completely different now. This used to signal politeness, or at least belief in some messaging about stopping the spread of disease. In my mind, imagining the droplets expelled from our mouths all day became unavoidable, and so I assumed that protecting service workers from that indecency would become a kind of norm. But when an establishment puts up a sign that says something to the effect of, “If you take off your mask indoors, you are asserting that you are fully vaccinated”, it introduces something else for people to prove. The new gesture is the exact opposite of the old gesture and it is physically impossible to perform both gestures at once.

If you leave your mask on, what does it mean, now? Nothing, really, since anti-maskers and pro-vaxxers look the same, and they are breathing the same unobstructed air, even though every shot is only so effective, there’s a new variant that spreads quicker than the last one, plus all these gay colds, and we were all told these things, explicitly, by nurses and newspapers.

Seems to me like one should do their best to not get sick or get other people sick now, but then again, that was always the case. I’m finding it difficult to stay on track here, sorry. “There is only so much we can do”, someone says, meaning something completely different from what another person means when they say the exact same words.

To be “fully” vaccinated, as the signs on churches and bookstores insist one can be, is not, in the way I understand the word, a possibility. Not to say that things aren’t working out better in hospitals than they were, or that whatever statistics or theories you choose to believe are not, maybe, true. But: there is a discrepancy between the way this phrase, “fully vaccinated”, is being used and its previously understood meaning. I hate to do this, but… “vaccinate, verb - treat with a vaccine to produce immunity against a disease; inoculate” (emphasis added).

Nothing has been invented yet that imbues us with immunity. We have always known this, and yet, we have a strange way of showing it. No one in the airport bathroom washed their hands for 20 seconds. The only person who didn’t hug anyone else at the funeral was the one whose husband had died from Covid. I’m including myself. There’s only so much we can do. The air is perfect here, in the sun, but numbing in the shade.

We walk by a woman wearing leggings that are way too small, a crop top, and slippers, a parking ticket or handwritten receipt sticking out of her waistband like a bill in a G-string. She is talking to herself, picking flowers off a tree, and eating them. Another woman wearing a straw hat with huge, pretty feathers in it plucks a bouquet from the trash. A pair of women look at themselves in the mirror of a bar window and smile. They are wearing stiletto heels and lingerie with nothing over it. Everyone looks strangely expensive and happy. One of the drag queens we see performing at Aunt Charlie’s is introduced as “genuinely crazy”. I only get one hangover in a week, and it feels almost like a balm for an unplanned day.

So often, I am inordinately frustrated by conversations about human behavior now versus then or here versus there. Oversimplifying is harmful, I plead, because generalizations move the needle, too. Assuming that everyone feels a certain way will cause people to act in certain ways. One can get the bends, being dragged up or over too fast. “All I hear about your generation”, I tell a relative of my boyfriend, “is that you’re entrepreneurial, you don’t do drugs, you don’t drive cars, and you don’t see the point of going to college”. The opposite of all of that is true, he tells me, incredulous. I should try hanging out with some young I-bankers he knows. But, he adds, he has never been to a concert in his life. The music he likes to hear is way too boring to see.

Since 2017, Spike has invited Natasha Stagg to do the same: one text a week, of any length, on whatever she likes. A new installment of Out of State will be published online every Tuesday for ten weeks – one summer long. Last week, she wrote about the strange phenomenon of (un)original immersive Van Gogh Experiences.