The Rat Race
by Natasha Stagg 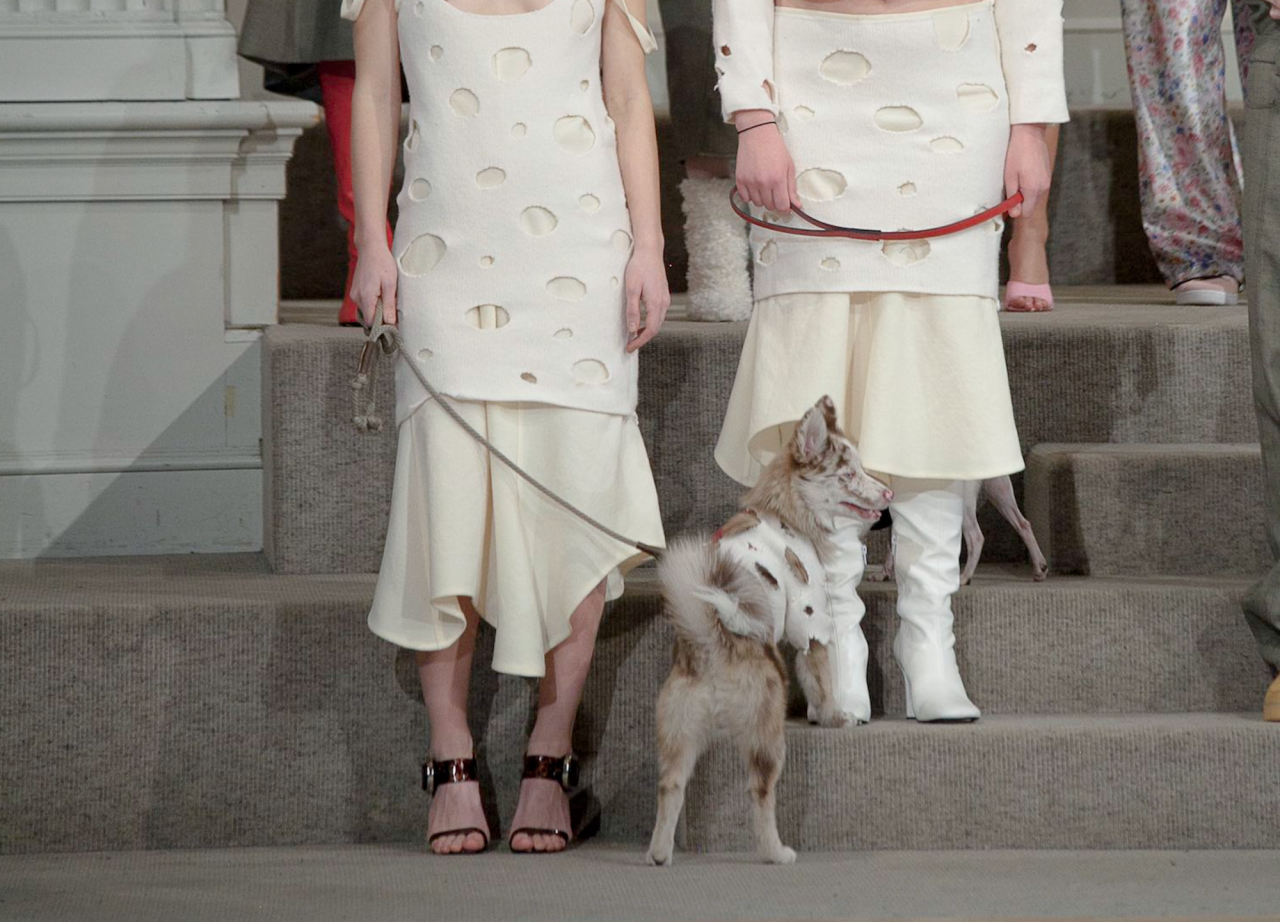 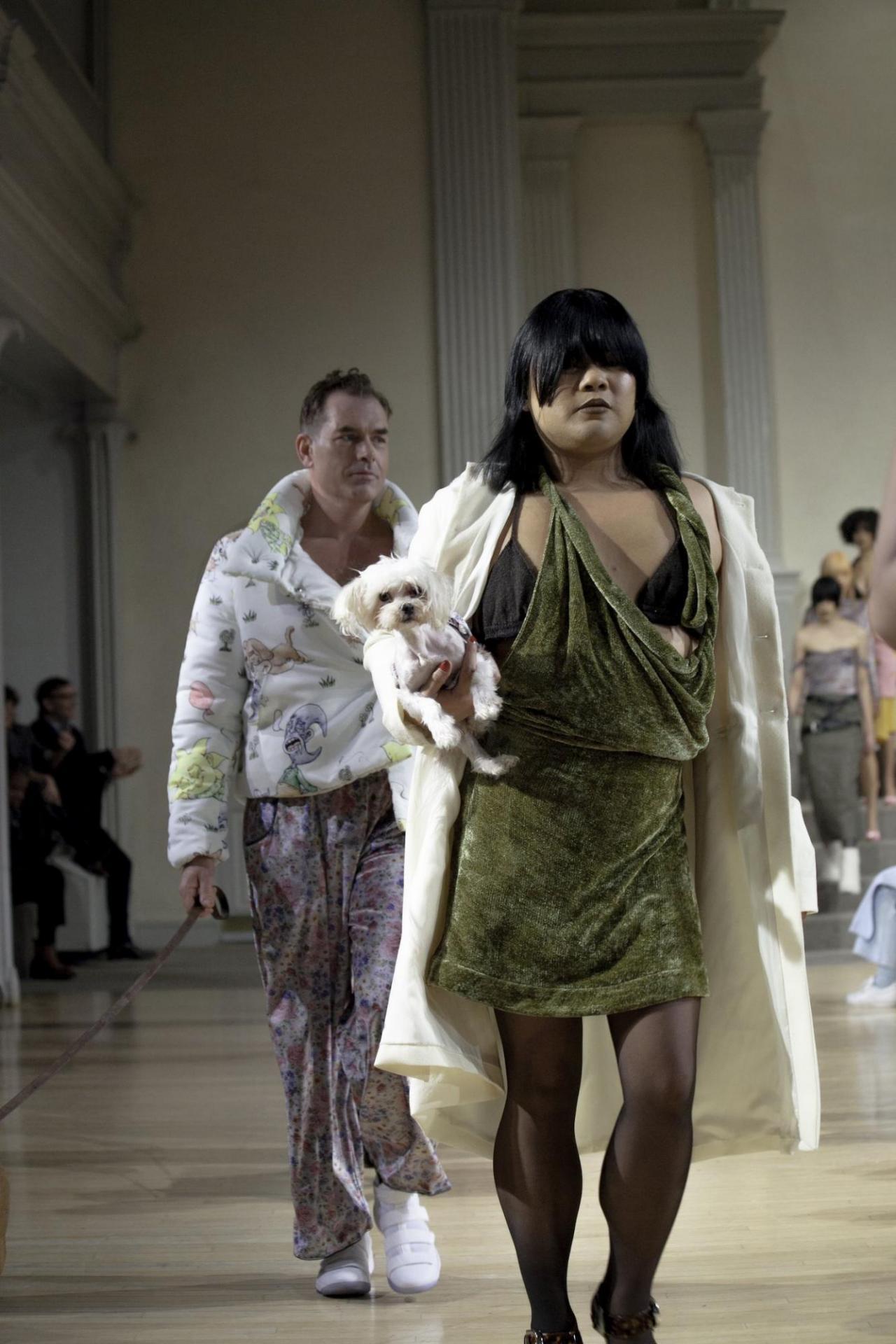 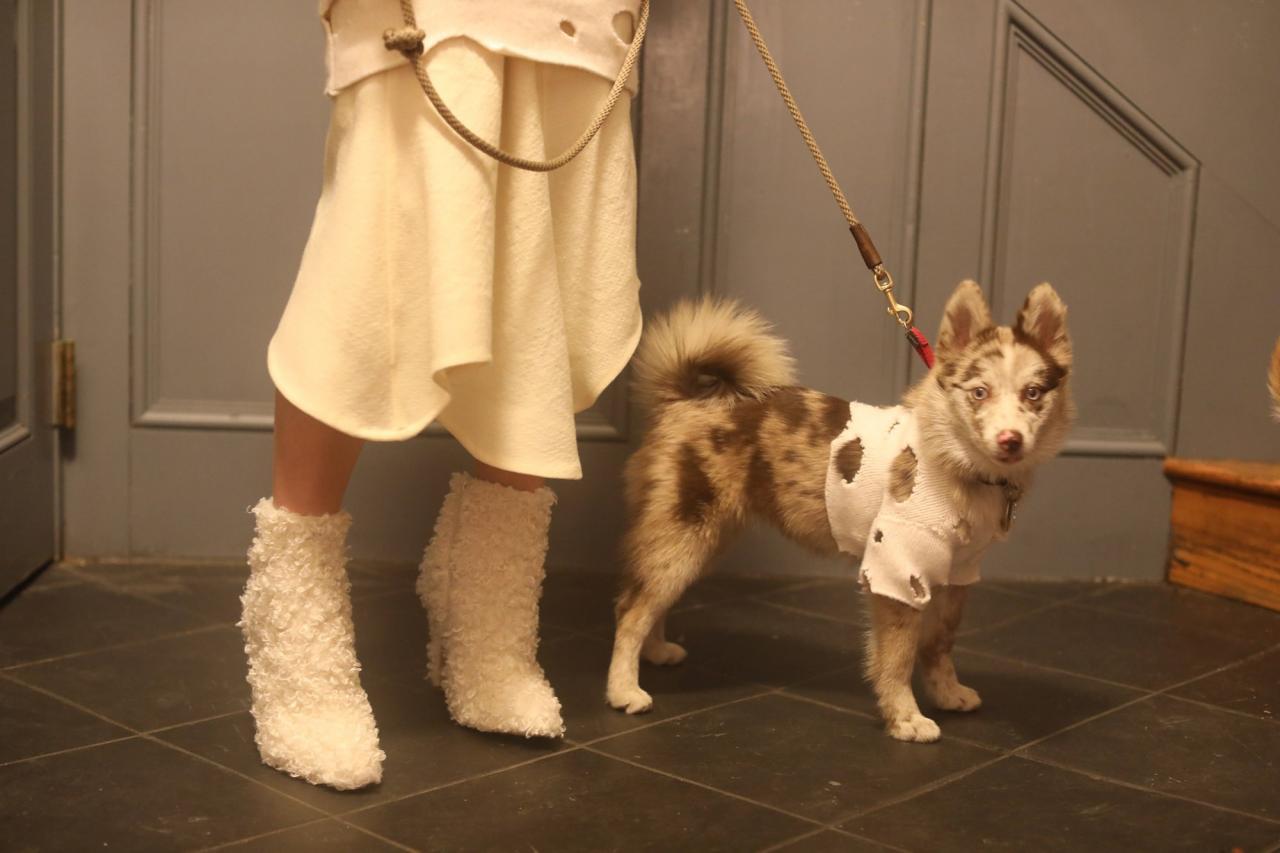 There is a woman in my neighbourhood that walks a wolf around on a leash. It is not a dog that looks like a wolf, it is a real wolf, I am positive. I have never asked her about it, since she intimidates me, wolf notwithstanding. Another man in my neighbourhood walks three large Shepherd mixes together and leers at people, sometimes shouting. This group, more so than the orange-haired woman and her wolf, reminds me of a gates-of-hell picture, Cerberus. The trash bags squirm and burst with rats on every street; a vine tendril crawls between the two panes of my window, reaching over my bed, a rope ladder for ants and other bugs. There were so many more fireworks and frozen drinks last August.

Apparently, fashion week is approaching, which means summer is about to officially end. Rumour has it that a few brands will postpone their shows yet again, this time due to New York’s new policy mandating vaccination certificate checks at the door, which creates a kind of sieve through which most publicity firms, casting agencies, and studios would rather not run their clients. That, or it’s for the other reason, the old reason, regarding the dangers of public indoor gatherings. Or it’s because the schedule has splintered, the entire luxury fashion system is ever more under fire for eco-crisis concerns, there are questions about if anyone truly wants to be reminded of power imbalances with elitist marketing strategies right now, and something like a temporarily planted field of flowers does so much better on social media anyway.

I, for one, am excited to return to some type of seating assignment if they will have me. Since leaving an office job a year ago, I’ve yet to find a replacement water cooler, and fashion week events might be just the thing. There have been dinner dates, boat parties, friend reunion trips, upstate weddings, and movie screenings, yes, but nothing as sparkling with static shock as a parade of walking advertisements surrounded on all sides by beating paper fans.

When a person tells me, upon meeting me, “Oh, I just finished reading your book”, followed by nothing, I wonder what, if anything, they want me to say in response. It happens all the time. “Oh, wow”, I say, or sometimes, accidentally, “thank you”.

I just finished reading a book and happened to meet the author at a bar the following week – last week – but I said nothing about this coincidence to this author. I loved the book, and could have told him this, and I’m sure he would have loved to hear that, even if the book was pretty old, maybe especially because of that, but I felt self-conscious for a few reasons, and so I said, “Nice to meet you”, not starting in on any type of praise or even recognition, when in truth I had recently been immersed in some intense thoughts that he had had in the 1980s. Generally, I don’t want to remind anyone that their everyday encounters are not so arbitrary or forgettable to everyone involved. I’ve always liked the phrase, “Stop before you say something you can’t take back” because you can’t take back anything, especially a first impression.

WHAT NON-WALKING THINGS ARE BEING HIDDEN AWAY HERE, I WONDER, THESE ODD PETS ACTING AS INADVERTENT COMMERCIALS.

Even if a kind of secretive undercurrent to city life has returned, it is, like anything, in danger of being exposed or bought out by promoter types. Hierarchies are especially difficult to maintain in these innards-out bars on busy streets, but great efforts have been made.

In a much nicer neighbourhood than mine, I often see a woman walking two Puli dogs, the ones that resemble rag mops. The particular way they bounce gives one the sense that they each weigh a lot but do not touch the ground. Their eyes and legs are not visible. Another woman in the same neighbourhood walks a large pig. Children are always running towards it as if it were petting zoo entertainment, which is to be expected. This woman and the one with the Puli pair are visibly impatient, though, irritated by all the attention their animals get. I imagine them, individually, at home, marvelling at the strange qualities that make up these creatures, resentful that a price for owning this opportunity is to take them outside all the time. What non-walking things are being hidden away here, I wonder, these odd pets acting as inadvertent commercials.

In a viral video, a young woman chases a rat in Tompkins Square Park, thinking it is her own. There is a moment of recognition that causes her to stiffen and stop the chase, then turn to her friend and say, “It’s not my rat, just some random rat”. What was the identifying feature missing from the rat she confused for her pet? Did that one come back, or did it escape to the underground?

Since 2017, Spike has invited Natasha Stagg to do the same: one text a week, of any length, on whatever she likes. A new installment of Out of State will be published online every Tuesday for ten weeks – one summer long. Last week, she wrote about cancellable filmmakers and the film industry's widespread daddy issues.