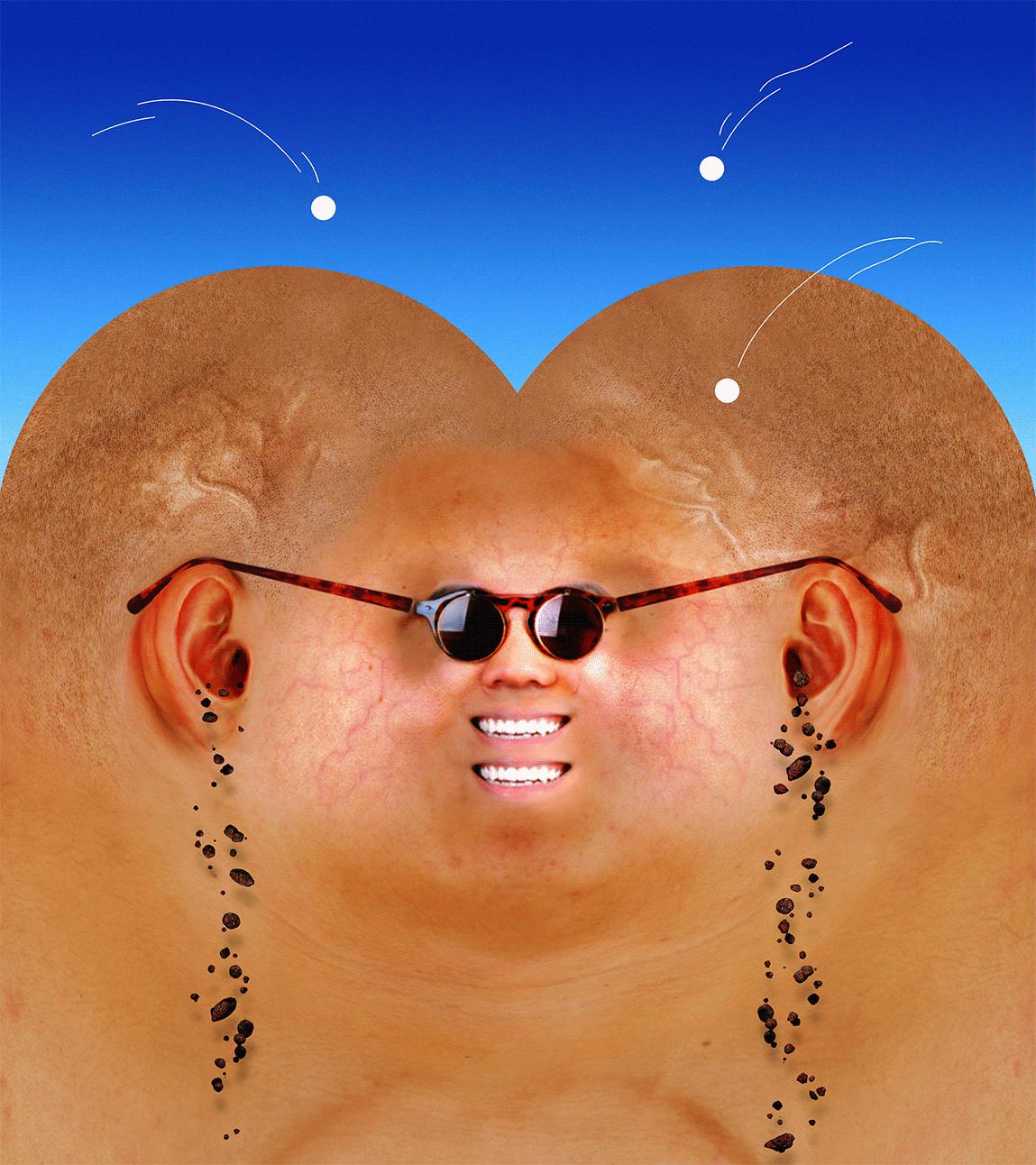 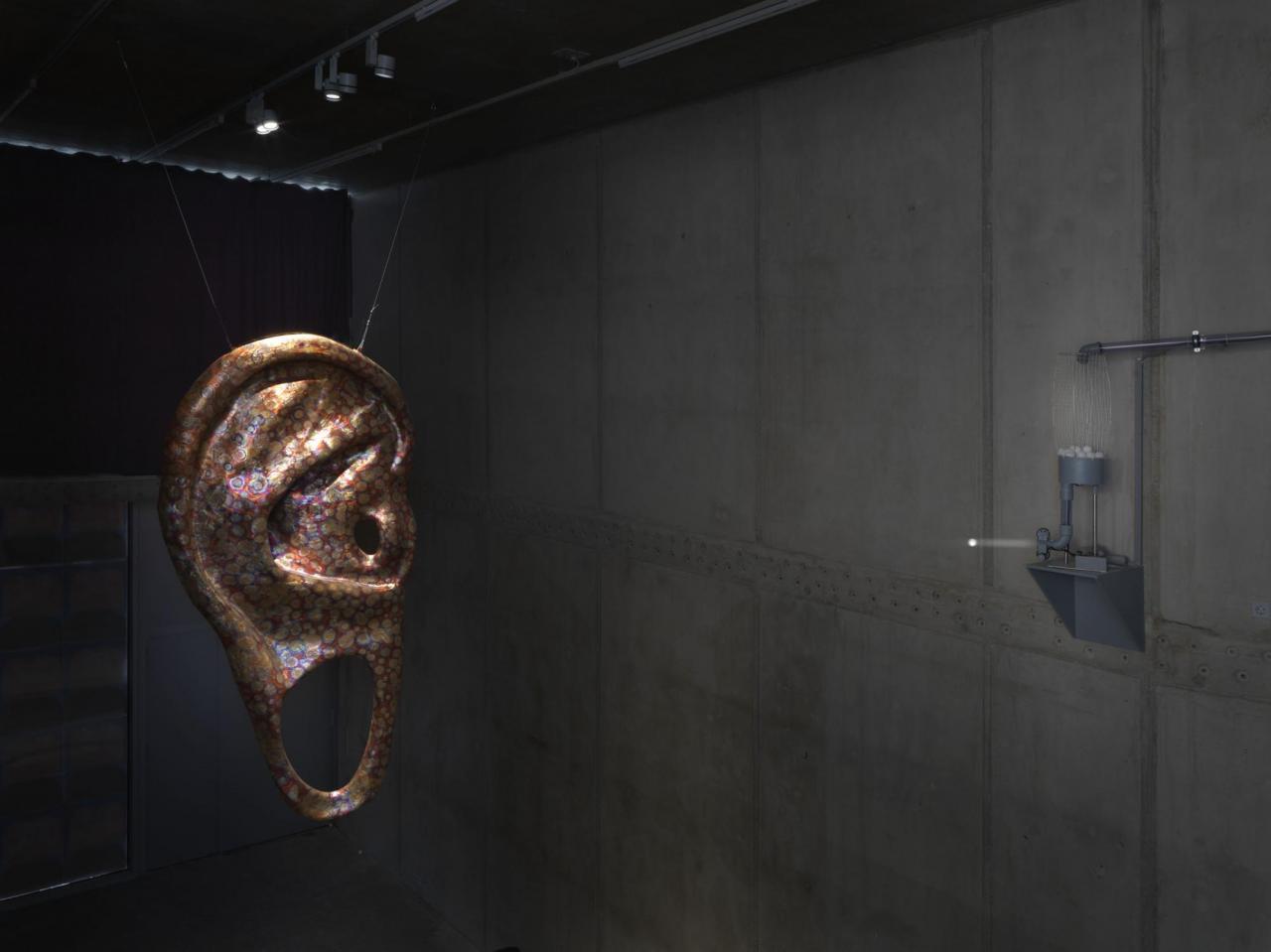 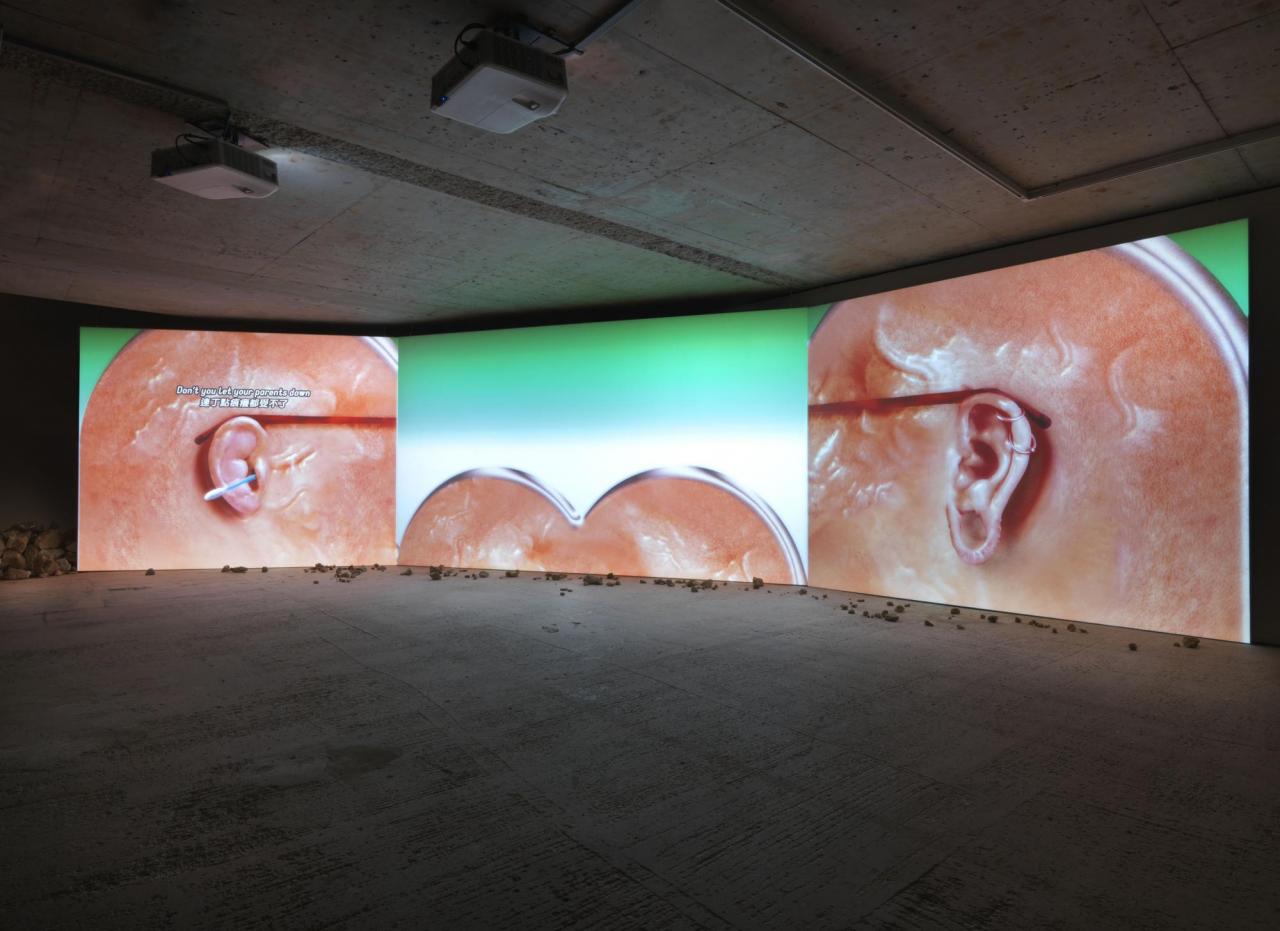 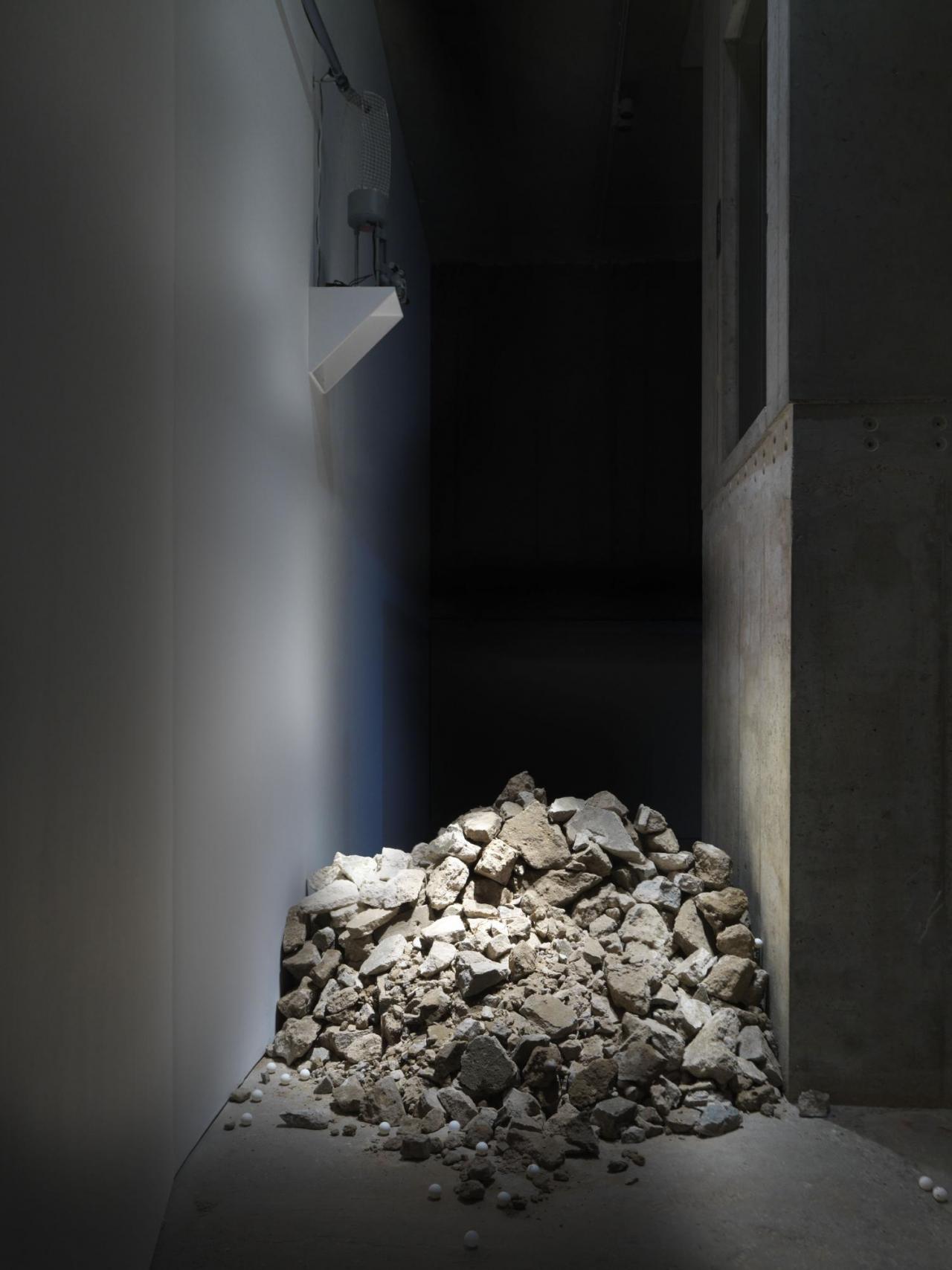 The visual style of the central video in “Earwax” departs from your earlier animations, like the Fables — it’s more realistic; less cartoonish, though still totally heightened and colorful. What tools did you use this time around? Same as usual, or were new processes sprinkled in?

I have always used a similar set of software programs to make videos. The process is not so technically-driven, though. Live footage and animation are mixed in this new work. It was actually the skill I learnt from my first day job, in which I made special effects in post-production for a living. The Fables series are a bit different from my earlier work too, where I wanted to make most of the visuals happen in a still frame, instead of using the traditional method of editing shots together. Within a still frame, the work can be focused more on the storytelling aspect. So in this central video in “Earwax,” I wanted to push it further — as if the audiences are watching a stand-up comedy show where I’m just speaking. There’s less movement and animation.

I smell value in garbage.

Can you talk a little bit about what else we hear in “Earwax?”

Three machines shoot ping pong balls to the gigantic copper-made ear sculpture in the center of the space.

Every single ball that bounces back creates a religious bell-like sound.

Balls that fail to pass through the earhole represent the words that I could barely listen to.

Rocks are crumbling, and my murmurs from the video leak out from the basement.

There, a single ping pong machine repeatedly shoots at a wall.

The echoes of their bounces create tinnitus.

Connecting, maybe, to that reference to religious bells: is there a moral lesson to “Earwax?” It seems (obviously) less didactic than your Fables. But I sense there’s something more to it than technicolor collages and squeamish body stuff. How would you summarize its message?

The Fables series is dedicated to giving kids some moral lessons, so a digital motherly voice speaks in it.

“Earwax” is different. It was inspired by the reaction it provokes for me when friends think the gibberish I am interested in is nonsense. At the same time, those gibberish ideas fascinate me. I smell value in garbage. I don’t mind people thinking my ideas are nonsense, because common sense bored me. There is no message in “Earwax.” Instead, it conveys the process to another question, like an interchange station:

The video is huge, splashed across three channels, presented in the bowels of TACB’s topsy-turvy building. Prior to that show, I’d only had the opportunity to view your video work online, on my laptop — which is also really intimate, in a certain respect, because the body humor feels so verboten (it was almost like my mom was going to walk in on me and I’d get busted for watching something dirty!). What are your intentions for “Earwax” as an immersive installation? What do you hope it’ll make viewers feel, watching it in that space?

To be honest with you, I haven’t been to the space either, due to Covid. But the team at TACB walked me through it virtually and gave me really detailed information. The high ceiling on the upper floor, in contrast with the low ceiling in the basement, caught my attention. I already could imagine the stairs to the basement as the ear canal to my inner ear. The bell, the balls and the echo all come together with posters of my meaty face wrapped around the outside of the building, as if visitors are walking inside my head through my ear hole.

Trolling is a way to provoke common sense.

You’ve said elsewhere that you embrace — and even admire — mean Internet commenters. Are you courting them at all with any aspects of this work? Seems to me that putting Beethoven onscreen next to buttholes could provoke some spirited commentary. What do make of the cultural figure of the “troll?” Are elements of “trolling” ever deliberate parts of your practice?

I do enjoy examining all the beef on the internet. I mean, who doesn’t? It is chaotic and fun as a form of entertainment, but also as human behavioral research. Trolling is a way to provoke common sense, I think. Pushing the line is the beginning of progression and enlightenment. Visually, speaking about Beethoven next to a butthole could be outrageous, but is all about how the context is presented. I am constantly imagining how Beethoven would react if he could listen to the work he wrote in his deaf period with healthy hearing. Critics across decades over-read and praise the work, when Beethoven himself is not even sure how it sounds. This paradox fascinates me.

I also appreciate memes a lot. A cute little .jpg can connect multiple social affairs, reflecting the contemporary time with provocative humor. People sometimes act like visiting a museum or reading contemporary art demands a certain level of experience or studies, to be able to understand the context. Trying to explain a meme to your parents is even harder, because it involves so many different layers and references. People might see memes as a troll, but I love studying the connections behind them.

One more value I treasure about memes is that they are regional. I am not a big fan of globalization — I believe it makes the world more flat and dull. It washes out the charm in each culture. But I found that I have no clue at all what to make of it when I read about someone from another part of the world sharing their local meme. It tickles my curiosity when I am not able to laugh with them.

Voyeurism, which feels related to this kind of mass-circulating internet culture, also comes up a lot in your work — “Earwax” included. Why is it so satisfying to glimpse other people’s worlds, or in this case, their weird body tics? Is this kind of scopophilic pleasure related to the aesthetic satisfaction of looking at art in general? Why does watching chunks of crud fall out of a giant onscreen ear feel so damn good?

Voyeurism is everywhere in different formats. Gossip magazines, social media, YouTube, zoos, telescopes, OnlyFans. People basically want pets because they want to peep on them 24/7. Everyone desires to be something else but themselves. How many ghost social media accounts do you have to stalk others? It’s not only the aesthetic satisfaction of looking at art — people get more satisfaction by figuring out the artist's personal life, gossiping about their inspirational muses, digging out the diary of a dead artist and publishing it on Netflix. We long for details, something tiny, close, and intimate. It’s like ASMR, which always gives me goosebumps when it expands my senses. It feels so damn good when every organ becomes the genitals.

Is anything off-limits to you? Is there anything — bodily or otherwise — that turns you off so much that you’re like, “no thanks, I’m never making work about that!?”

Sloths. Their smiles are creepy af. They remind me of the Japanese horror movie The Ring, which gave me nightmares when I was a kid.

WONG PING is an artist based in Hong Kong.

ADINA GLICKSTEIN is a writer living in Berlin and an Editor at Large for Spike.

Subscribe
Newsletter
© 2023 Spike Art Quarterly
10. 6. 2022
Nothing Off Limits: An Interview with Wong Ping
by Adina Glickstein