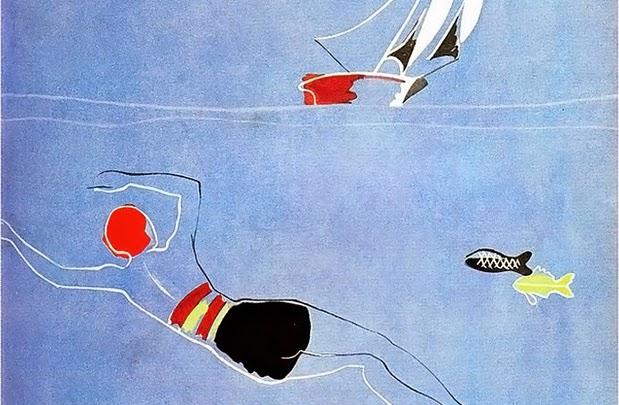 For Theo summer of 2017 Spike invited Natasha Stagg to do the same: one text a week, of any length, on whatever she likes. One summer long. This is her second report:

The holiday makes me lonely, even though there are fireworks going off around me and it isn’t even Independence Day yet. It isn’t even evening yet. I went out with friends last night and the night before, but it still seems like the city’s been deserted. I assume some people are on Fire Island, a place I’ve never been. It looks nice, but expensive. I love expensive things but I hate being around the people who can afford them. My roommates are in Rhode Island visiting friends. My apartment is empty and dark.

Donald Trump has tweeted an old video from his pro-wrestling days that shows him knocking someone out, but the guy’s face has a CNN logo superimposed over it. I don’t even know why he’s mad at CNN this time, or if there’s a new reason. The reason, I read, behind his tweet about a news anchor “bleeding badly from a facelift” was because her news show pointed out that the TIME magazine covers displayed in several Trump resorts aren’t real. The news coverage of these types of events reads like someone trying not to laugh.

It doesn’t seem right to get excited about a piece of journalism that has nothing to do with America’s ties to Russia, but this Vestoj interview with Lucinda Chambers is delicious because it’s so tame, and yet it’s considered incredibly outspoken for the industry. It’s the first time I’ve seen anyone as top tier in fashion magazine world (she’s the former fashion director of Vogue UK) call out the process of pandering to advertisers by placing their clothing on covers. (The practice is especially calculated when it comes to covers, but all the inside material in fashion magazines is basically paid-for, too.)

Maybe this isn’t so shocking to most people, but the idea that fashion magazines aren’t really saying anything that they want to say about fashion is one that I found baffling while I worked at one. Because what was the point, then? Anyway, no one ever talked about this except to one another, and I even heard a lot of people say at parties, “You know you’re not supposed to talk about this,” about the whole 1:1 ratio of advertising pages to editorial.

The spin other news outlets are giving this Vestoj story is that it’s about a woman scorned. She doesn’t seem bitter to me, though. Just over it. The newly appointed Edward Enninful fired Chambers because she was viewed as no longer relevant, but in her words, fashion magazines aren’t relevant. Or at least they’re not useful. No one who works at Vogue actually cares about the products they’re pushing. They don’t read their own magazines, either. Even if they wanted these products, they’re all too expensive for anyone normal. All this stuff is obvious, but I’m telling you, no one who is part of magazine world talks about it publicly. They all just pretend they can afford these clothes on their tiny little salaries. It’s an impossible game, sustained by pressure alone. I can still feel it as I write this.

The New York Times covered the article, it was so controversial. But most of the coverage was in other fashion publications. So those writers are either mad at it or relieved by it. It has become a pivot point. I was interviewed for Yale Radio this week, before I’d read it. During our conversation, though, I talked about the diminishing returns of magazine work. I always end up talking about it. “At least in fashion magazines,” I said. I’m much less experienced with art and literary magazines, although art magazines like my writing the best out of the three.

I was never a big enough deal to make a dent in the press the way Chambers has, but I’m glad I can sort of join her chorus now. The way I was paid and the way I was expected to dress and socialize while editing a fashion magazine were two parallel lines on a chart, never bending or crossing each other.

Everyone in magazines and in advertising is obsessed with Studio 54. Recreating the feeling of the party, the eclecticism of the guests, the gossip about it on Page Six, the emptiness of an Andy Warhol superstar. It’s the basis of basically every fashion campaign ever since. But the people who were really there can’t recreate it. There are parties going on all over Brooklyn that are being mined for their diversity and youth instead. Next, next, next unique and exciting individual, but wearing the advertiser’s clothing. The literary brat pack can write about that, if they’re around. “How do magazine writers get paid these days?” I asked the Yale interviewer. They used to get at least a dollar a word and now they have to haggle. I think they all moved to Connecticut or upstate.

I rambled about how nothing in fashion magazine world made any sense anymore and maybe it never did. I stopped myself from opening the can of worms about men deciding what women wear – CEOs, designers (for the advertising brands), photographers, the man hired as the new editor at Vogue UK, who fired the 57-year-old Chambers, who was there for 36 years. And that it should be a given that a woman’s opinion is worth more than a man’s when it comes to women’s fashion. But it isn’t. It really never was. My editor-in-chief (a man) mostly hired men. At one point I was the only female in the office other than the accountant.

The Yale interviewer thanked me, off the air, for mentioning that older writers don’t know how to get paid by magazines anymore. He’d interviewed quite a few and asked them pointed questions about the industry. Apparently, they don’t like to admit that it’s impossible to have these fabulous New York editorial writing careers anymore, even if they’ve moved away from New York. Maybe there’s still this dream of being one of those writers who lives and works on an island, like Ernest Hemingway or Frank O’Hara. Maybe they don’t want to bite the hand that feeds them, even if it’s feeding them about half as much per word as it did in the 80s and 90s.

But I’m living that dream, I said. I’m writing a column that’s based on a series that Marguerite Duras wrote in 1980. No longer do I have to worry about editing down an article I worked on for weeks to make room for something I vomited up under a pseudonym simply to please an advertiser. “How do you do it?” the interviewer asked. “Simple,” I said. “I work in advertising.”

I’m working on a few things right now outside of my day job. One is an essay for an anthology. One is an essay for a magazine published by a gallery. One is a short piece about album artwork for a fashion magazine. One is this. One is a narrative strategy for a new product that a brand hopes to launch this year. One is fiction that will hopefully become a novel.

Speaking of islands, it’s a holiday weekend and I’m staying home, reading a Bookforum review of the TV show Fire Island by David Velasco, who is writing a novel set on Fire Island. In the article, he recounts a mini-protest his house staged with signs that read “literally any other beach” as a reaction to straight couples in a house next door. Since I’ve never been, the image that comes to mind when I imagine Fire Island is Frank O’Hara getting hit by a jeep there, an island with no roads. Today I see many memes made from a photo taken of New Jersey Governor Chris Christie at a beach that his state administration closed, enjoying the empty sands with his whole family. Some friends are in Jamaica this holiday. I was there for Memorial Day weekend. I love the way the sky looks a deeper black there at night and how the air is somehow crisp and hot at the same time. The best part of my trip was off-roading in the jungle near the North shore (as a passenger – driving scares me). Now, I’m looking out at a starless black sky in Brooklyn. There are delicate explosions all around my apartment, punctuating the passing trains on the nearby aboveground track.

NATASHA STAGG is a writer based in New York. Her first novel Surveys was published with Semiotext(e) in 2016. A new installment of Out of State will be published online every Friday for ten weeks. In her first summer report she wrote about families, fantasies, and flying.