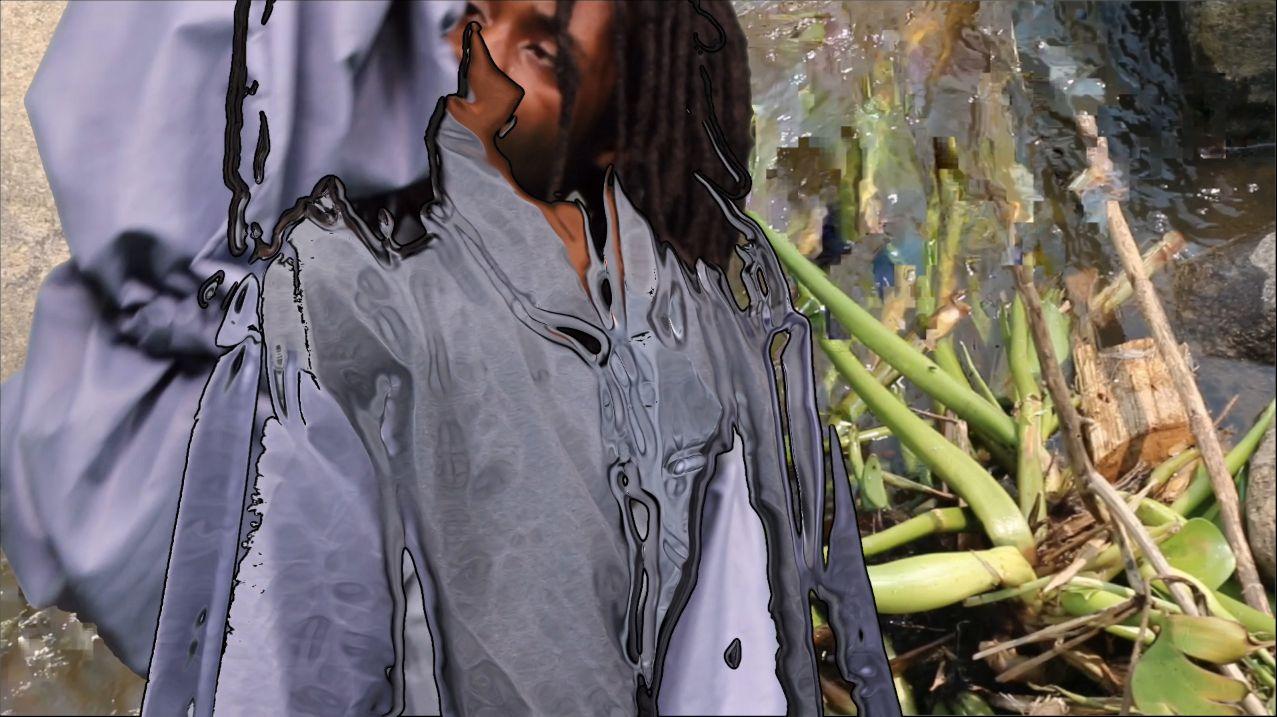 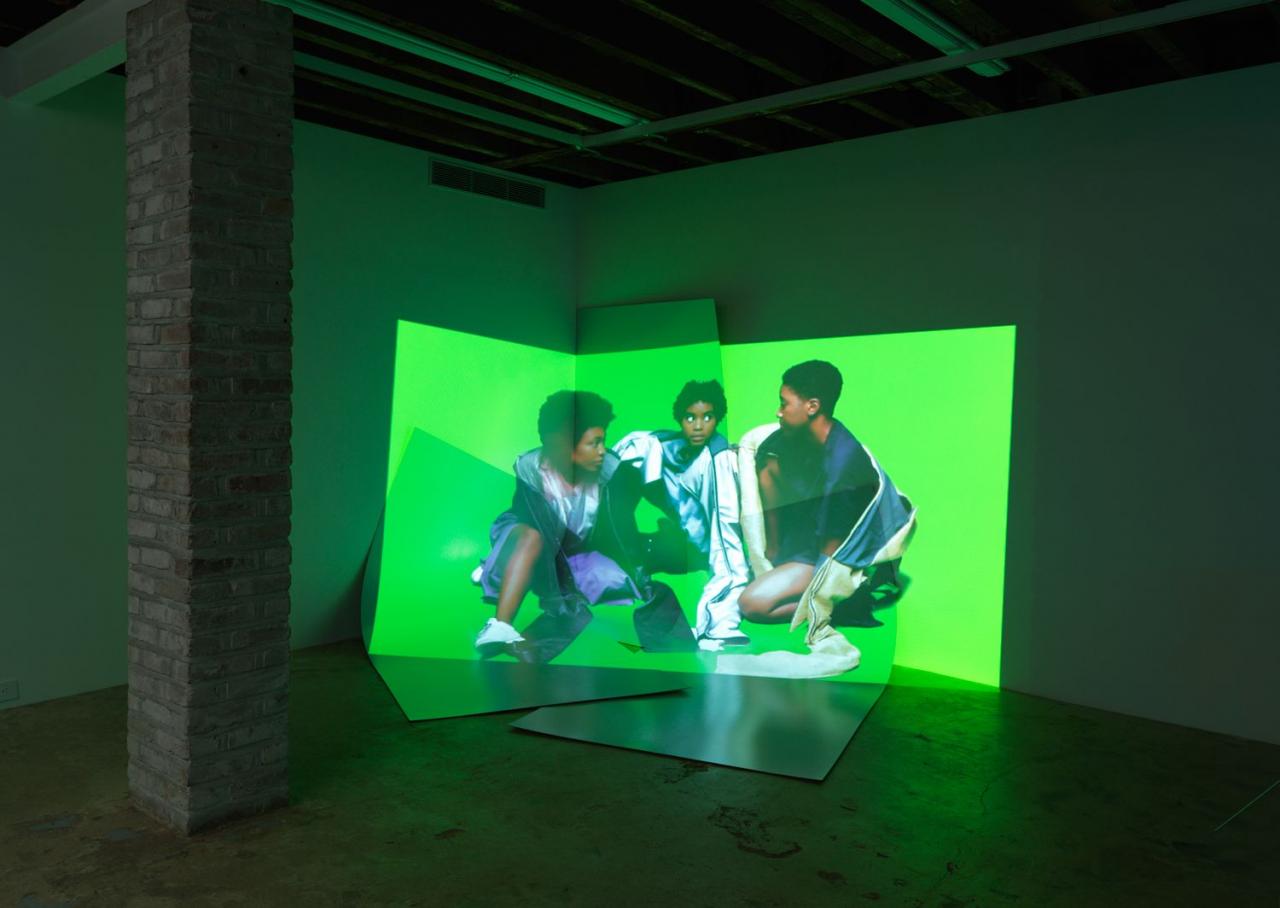 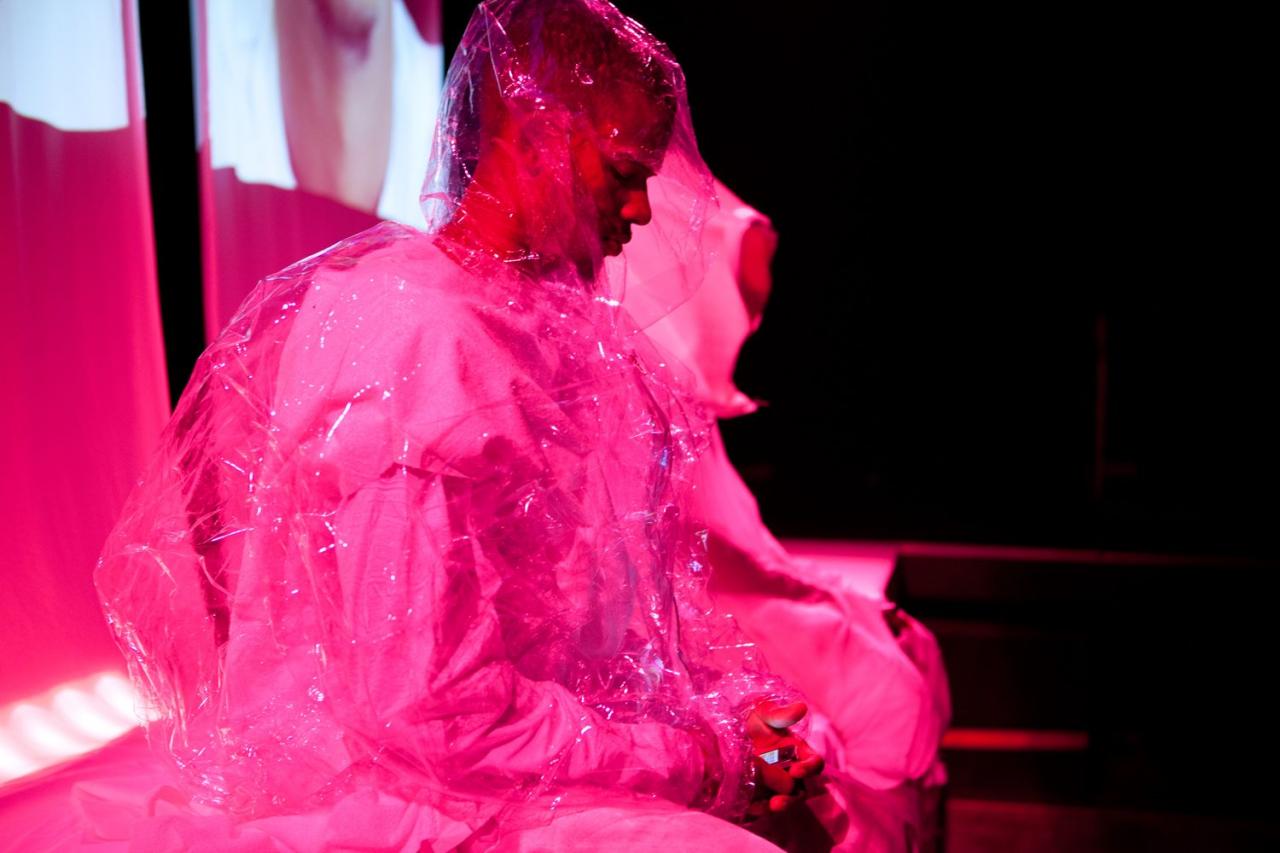 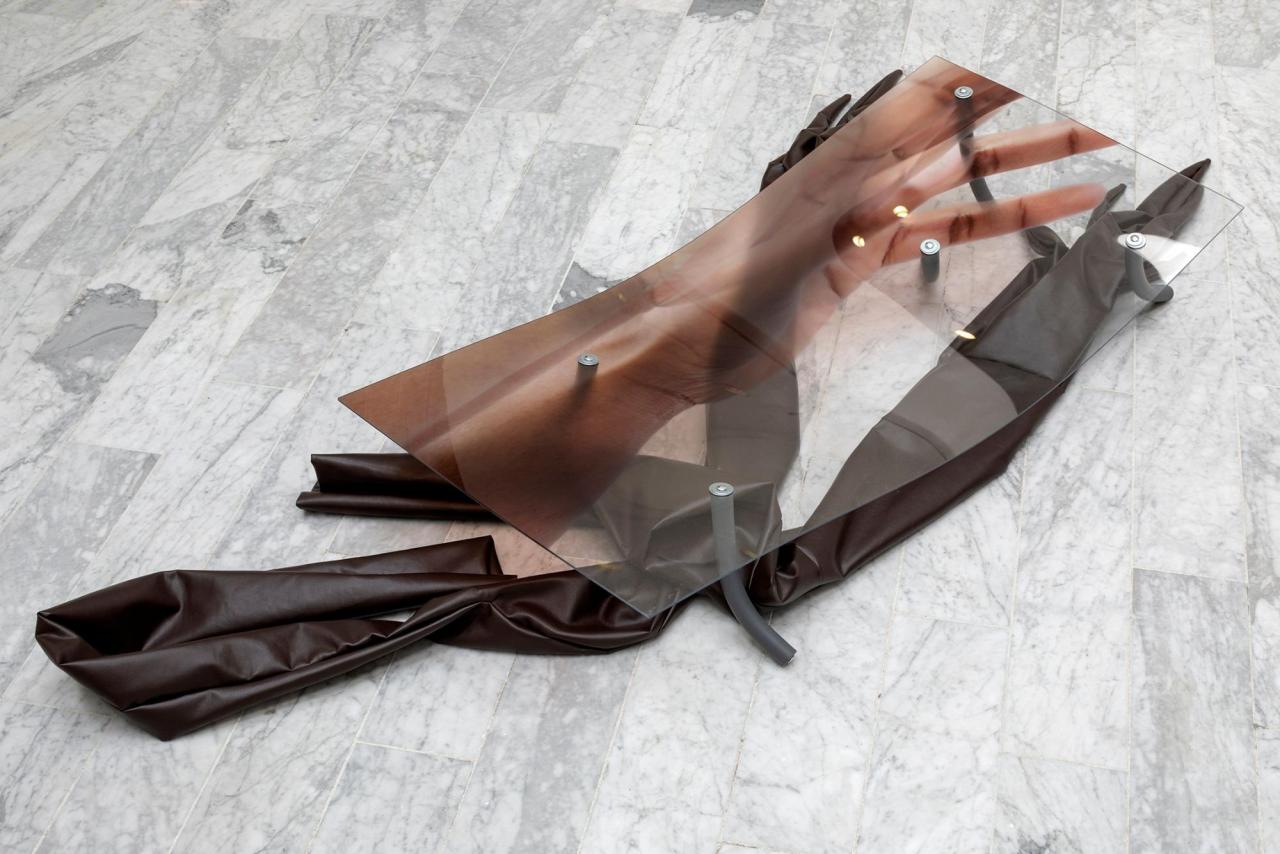 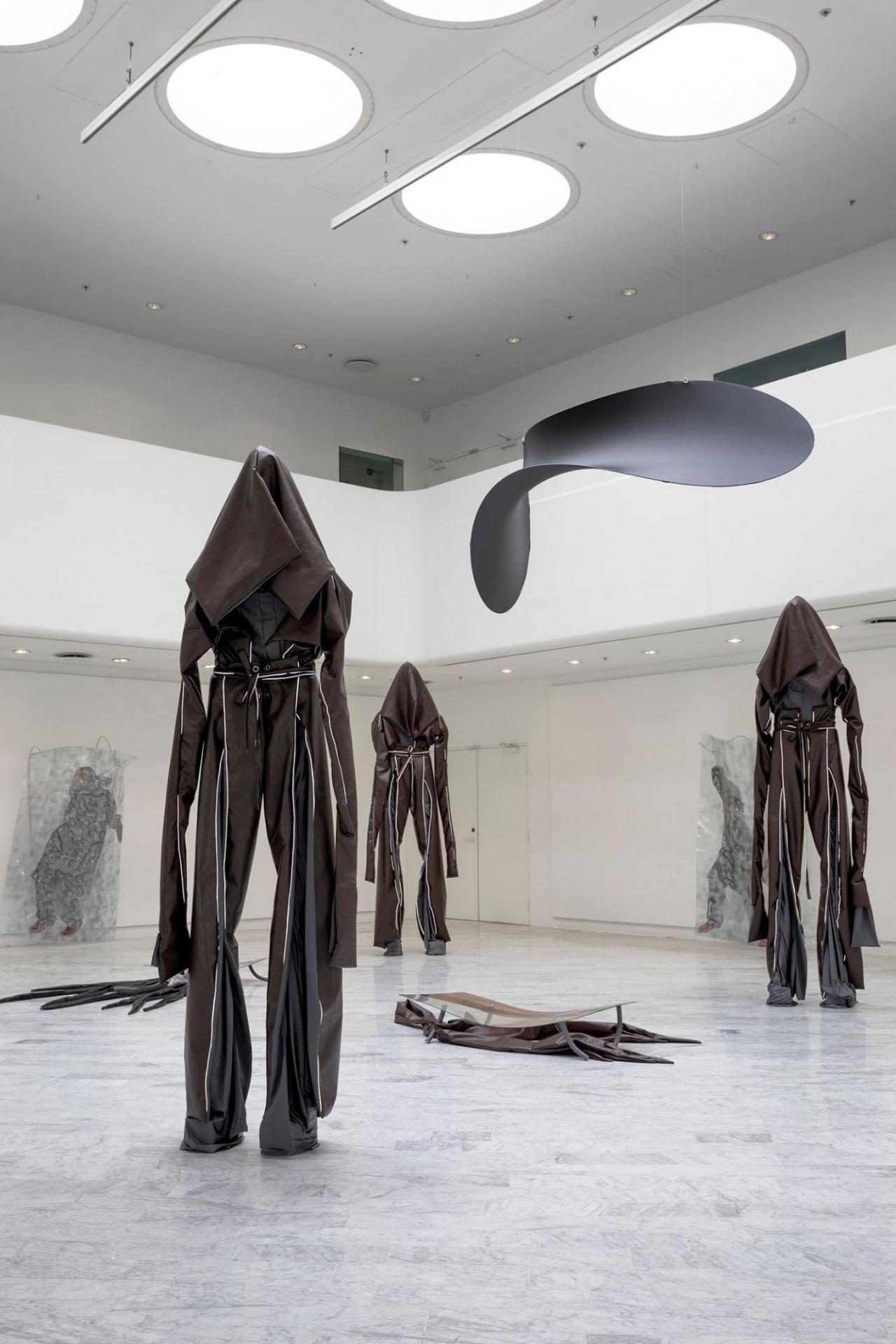 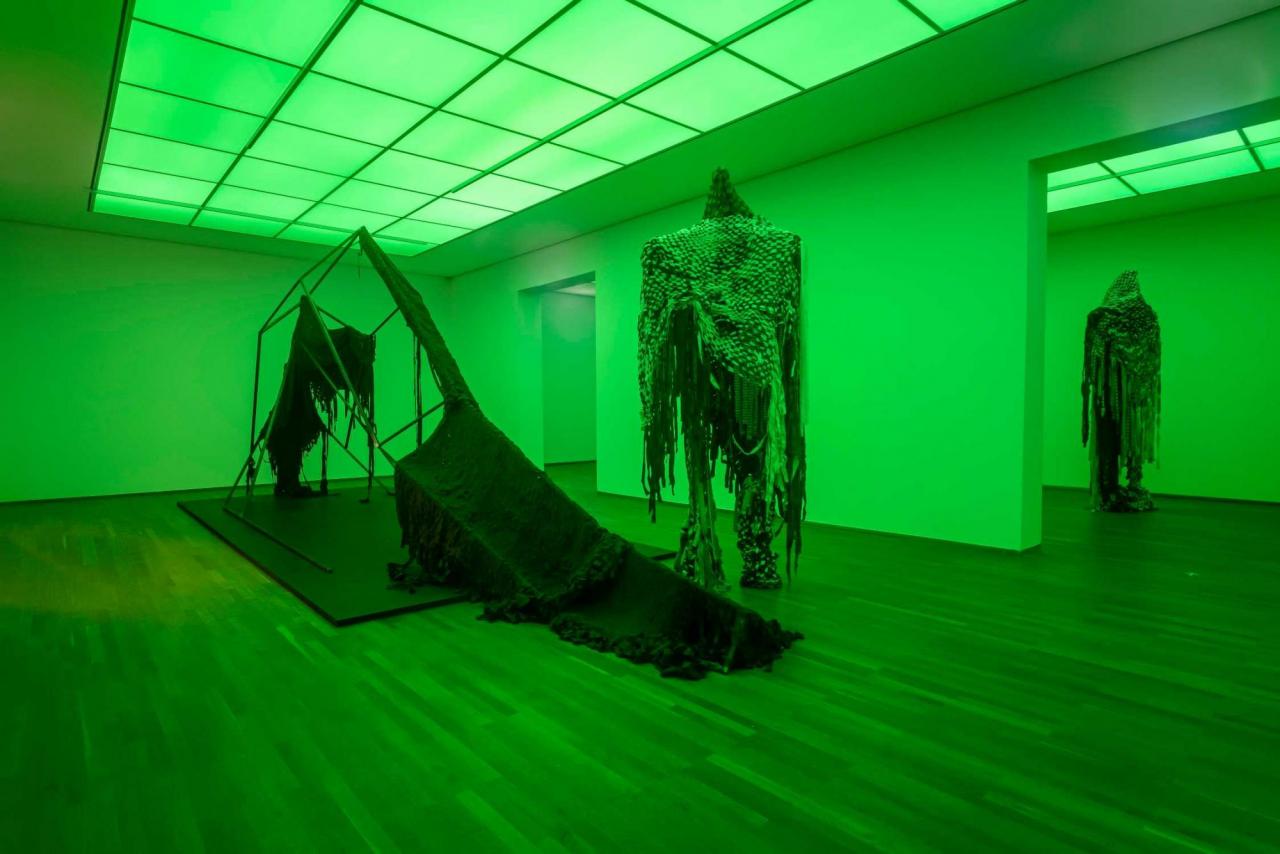 Sandra Mujinga plays with economies of visibility and disappearance: performances that take place in darkness, abstracted voices, multiplied bodies, clothing elongated to inhuman dimensions. The traditional identity politics of presence are reversed in order to operate out of hidden realms. If everything is surveilled, the biggest potential lies in not being seen. Last week, she was named the winner of the 2021 Preis der Nationalgalerie, Germany’s top award for young artists. To celebrate this honour, we're releasing Jeppe Ugelvig’s portrait of Mujinga from Spike #56: CULTURE WARS from our print archive.

In 2017, a meme depicting the yearbook photo of black high school student Savanna Tomlinson went viral overnight: “Anything is possible when you sound Caucasian on the phone,” read the caption underneath her pristine graduate headshot. A part-time telemarketing employee, Tomlinson noticed how she would unintentionally change the pitch of her voice at work to pass as a white woman. “It’s a comical truth,” she later explained in an interview, “something that growing up African-American you are thinking of and something that has relevance in today’s world.” Like all great memes, Tomlinson’s speaks dynamically to a set of highly complex issues (race representation, discrimination, language, sound, non-visuality) with a glaring banality, while its instant virality on Instagram, Facebook and Twitter proved how forms of non-white kinship form and circulate particularly successfully in the improvisatory, non-official, collectively-authored systems of the internet. As Aria Dean has written, “The meme’s success is just this: its reach and its rarity; its ability to snake through the underground only to re-emerge and mutate; its continued operations of hiding, incubating, and exposing black cultural elements. As object lesson, the meme teaches a queer body politic, an Afropessimistic, black accelerationist approach to rendering oneself and rendering and rendering and rendering and rendering and rendering.”

In the work of Sandra Mujinga – an artist who admits that memes help her think through “a lot of things” – the black body refuses coherent visual representation to instead exist in a state of constant rendering and disappearance. Through prosthetics, doubles and skins – material and virtual – the body marks its presence, yet escapes fixation in time and space, existing instead as an echo, a trace, a shadow or a ghost. At times, like in her music videos, the performing body is wholly absent, replaced instead by decontextualized footage of people from the artist’s vast archive of YouTube videos. At other times, it multiplies and mirrors through other performers, occupying screens or physical art spaces with a calm but assertive collectivity. Across video-making, costume design and performance, Mujinga displays a profound understanding of how images of bodies – for better and for worse – circulate in our culture, and proposes radical tactics to disrupt these flows in both physical and virtual space.

More so than any other, the black female body is the object of projected spectacle, expected to perform, entertain and seduce, particularly online.

Born in 1989 in the Democratic Republic of Congo and raised in Norway, Mujinga’s earliest artistic output resembles that of her peers, who belong to a generation of cultural producers that came of age in a digital arena still in construction. Opposed to the subcultural, hacker-esque affinity for anonymity and collectivity of 90s net.art, Web 2.0 marked the age of hyper-visibility of subjects, be they real or performative. In Untitled (Sound) (2011), Mujinga appears and performs in front of a webcam, singing into an un-synched microphone to a minimal electronic soundtrack that features the artist’s own dim, atmospheric vocals. With the camera set at a high black-and-white contrast, the shadows cast on the artist’s skin are exaggerated into a state of half-blackening, shifting with her movements. The work, which lives permanently on Vimeo, can be read alongside landmark digital-native works from the era, such as Petra Cortright’s earlier vvebam (2007), which similarly examines the techno-erotics of regarding and being regarded through technological interfaces in the very time of their emergence (which also explains why they might seem somewhat naïve from today’s perspective). The banal but crucial difference between the two artists is, of course, the colour of their skin; in the physical as well as in the virtual world, this makes all the difference. More so than any other, the black female body is the object of projected spectacle, expected to perform, entertain and seduce, particularly online. But in many of Mujinga’s videos and performances, black bodies are usually presented in non-action (Catching Up and Clear as Day, for example, both 2017) – waiting, standing around, hanging out in a group, checking their phones or speaking softly, refusing to captivate or gratify the gaze of the viewer.

One of Mujinga’s longest standing interests lies in garment making, which she manifests through stylish, elongated bodysuits in synthetic leather, a material that is both durable and hard to manipulate. Clothes can, in their most general sense, be understood to act as a visual container or home for the body, to extend or shrink it for aesthetic purposes, in the process often limiting its flexibility. “I’ve always had this thinking of how to extend the body, and how it operates as a skin,” Mujinga told me. “You have to really be patient with my garments, listen to them and be aware of how they continuously shape your body.” Worn by herself and by her performers, the garments ooze clear fashionability, while covering the wearers’ bodies almost entirely.

Although traditional identity politics can be understood to operate in an economy of presence (in media, in politics, in civic life), queer theorist and artist Zach Blas has observed a new kind of politics of appearance playing out today that instead focuses on strategies of obfuscation, imperceptibility, invisibility and illegibility. “The common enemy is political representation, here defined as the state-sponsored ‘legitimising’ processes conducted by techniques of recognition of standardization,” he writes in his essay “Queer Darkness”. “Representation is what makes something intelligible, visible, and classifiable on the state’s terms.” In the dystopian era of state-sanctioned biometrics, genomics, real-time tracking and racialised police violence, where identification is inevitably bound with locatability and control, for browner bodies in particular, the begging question is not how to be seen (online, in the real world) but rather How Not to Be Seen, as proposed by Hito Steyerl in a 2013 video work of that name.

The most radical transgression of visibility is of course darkness, in which Mujinga find potential.

Mujinga is painstakingly aware of this, weighing in her work the double-edged sword that is visibility. Visibility promises civil rights and political representation, but it also leads to tokenism, fetishisation, control, and apparently, death. Refreshingly, her response is a remarkable de-privileging of the visual altogether, to instead prioritize and find agency in the audial. Under her musical moniker NaEE RoBErts, she has combined her love for electronic music production with an alternate politics of representation in which subjects announce their presence through abstracted voices and sounds, changing form and contouring to obfuscate clear representation. (Mujinga, too, once worked in telemarketing and found that her voice enabled her when the colour of her skin would prohibit her.) In her live performances, costumes and speakers act as stand-ins for her body, or other bodies stand in her place, while she often hides in the kitchen or behind a DJ booth. By approaching the auditory as a kind of presence detached from visuality, the subject appears not as a racially marked body, but rather as a trace or echo of one, visualised only, for example, on the player of a SoundCloud track – a platform that the artist approaches with a keen enthusiasm.

Raised in Norway and educated in Sweden, Mujinga has articulated her advanced techno-material identity politics in a region known for the complete absence of discourse related to race and ethnicity representation. The status of black identity in the Nordic region is hardly discussed in its small art world, yet the artist has shown devotion to rendering the space of art as one of potential black sociality and community. Working with a recurring and growing group of non-white performers, who she casts on the streets of Oslo, Malmö and Berlin, she occupies museums, galleries, artist talks and theatre halls, invitation after invitation, always multiplying her presence through the company of others while refusing to adhere to trending tokenisms. (On panels, for example, the artist insists on appearing with at least two other people of colour.)

The most radical transgression of visibility is of course darkness, in which Mujinga, like Blas and other queer writers such as Jack Halberstam and Daphne Brooks, find potential. In the artist’s 2018 performance Nocturnal Kinship at Berlin’s Volksbühne, three black female performers moved slowly through a space in complete darkness, dressed in oversized garments with elongated pleather tentacles that resembled elephant tusks. The performers were only momentarily visible through the rays of a flashlight, which, through a mirror at one side of the room, created spatial confusion for the audience. Inspired by the reported phenomenon of African elephants transitioning to become nocturnal in order to avoid poaching by humans, the piece proposes darkness as a space of resistance and survival for bodies that are preyed upon.

Mujinga’s recent exhibition at Tranen in Hellerup, Denmark skilfully crystallised the artist’s far-spanning examination of the endurance and survival of the racialised body between the interfaces of the screen and the physical world. Semi-transparent PVC films scattered across the gallery floor revealed fragmented bodies of colour despite their playful, reflective surfaces. Elongated pleather strips enmeshed these interfaces that resembled both computer screens and moulds of bodies. A series of her garments loomed toweringly over the audience, their tusks producing mis-anthropomorphic shells of bodies that have either left, escaped or no longer exist. Entitled “Calluses”, the exhibition spoke to the enduring qualities bodies of colour must acquire. Here, skin hardens and turns opaque, and enters society’s flimsy grey zones of fragmented representation in the margins, underground, outside of HD resolution. Rather than occupying the place that is usually considered “political” for a female artist of colour – crystallised in the fixated, stable, legible image – Mujinga instead works to surround what we consider the political, to paraphrase Fred Moten and Stefano Harney’s seminal The Undercommons. “We surround democracy’s false image in order to unsettle it,” they write. “Every time it tries to enclose us in a decision, we’re undecided. Every time it tries to represent our will, we’re unwilling. We got politics surrounded. We cannot represent ourselves. We can’t be represented.”

JEPPE UGELVIG is a critic, curator, and contributing editor at Spike.

This article originally appeared in Spike #56. Want to read the full issue? Print copies and ePapers are available in our shop.

Sandra Mujinga, I Can Delete It, It Is Not Happening Now, 2014. Performance for Soft City, produced by Kunsthall Oslo