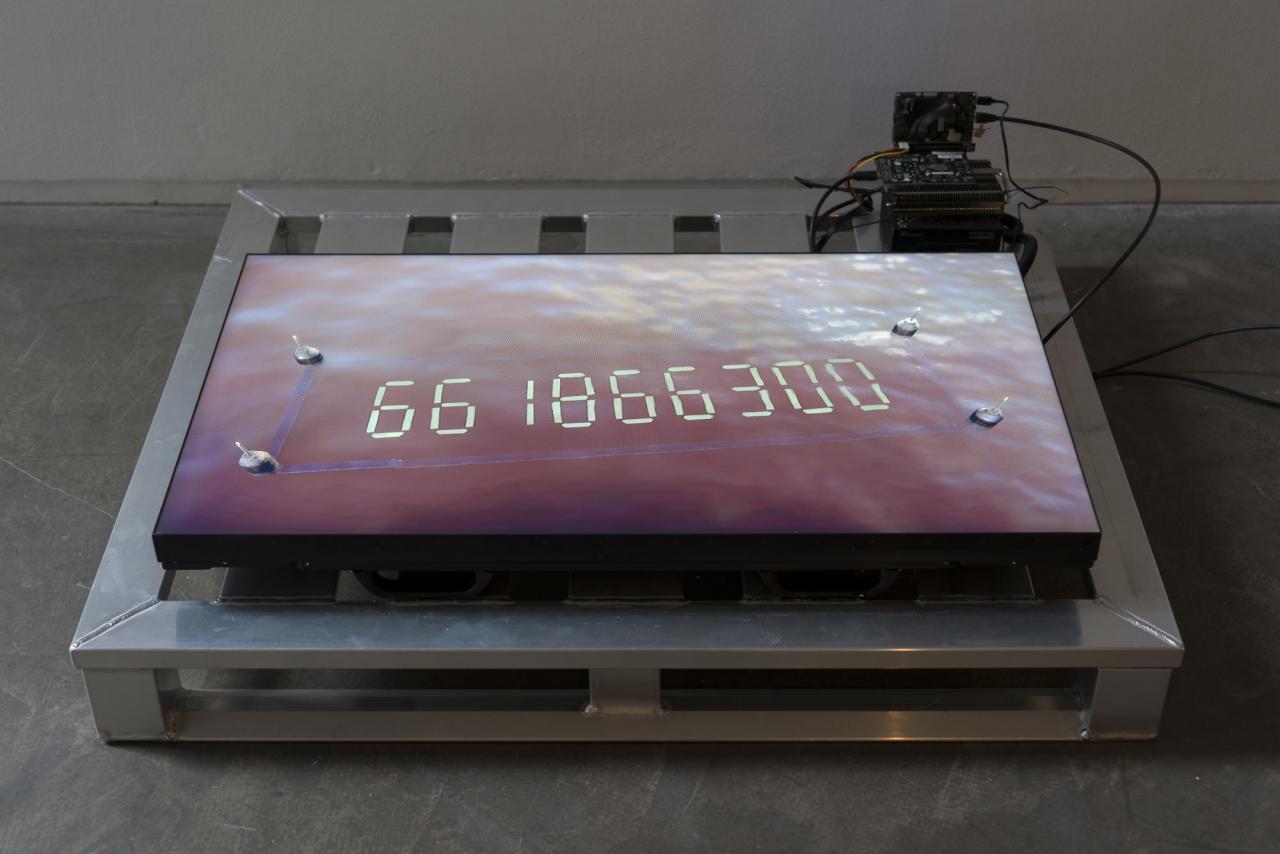 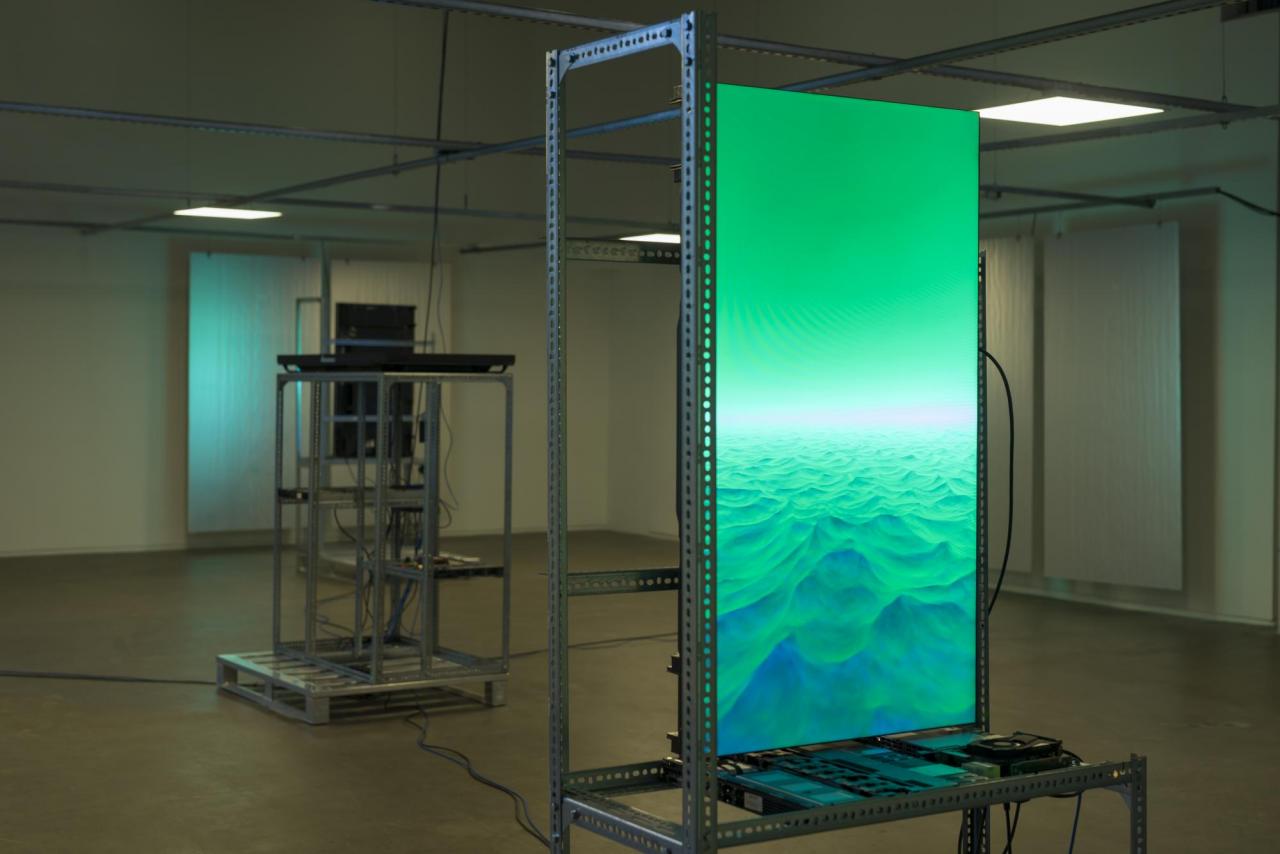 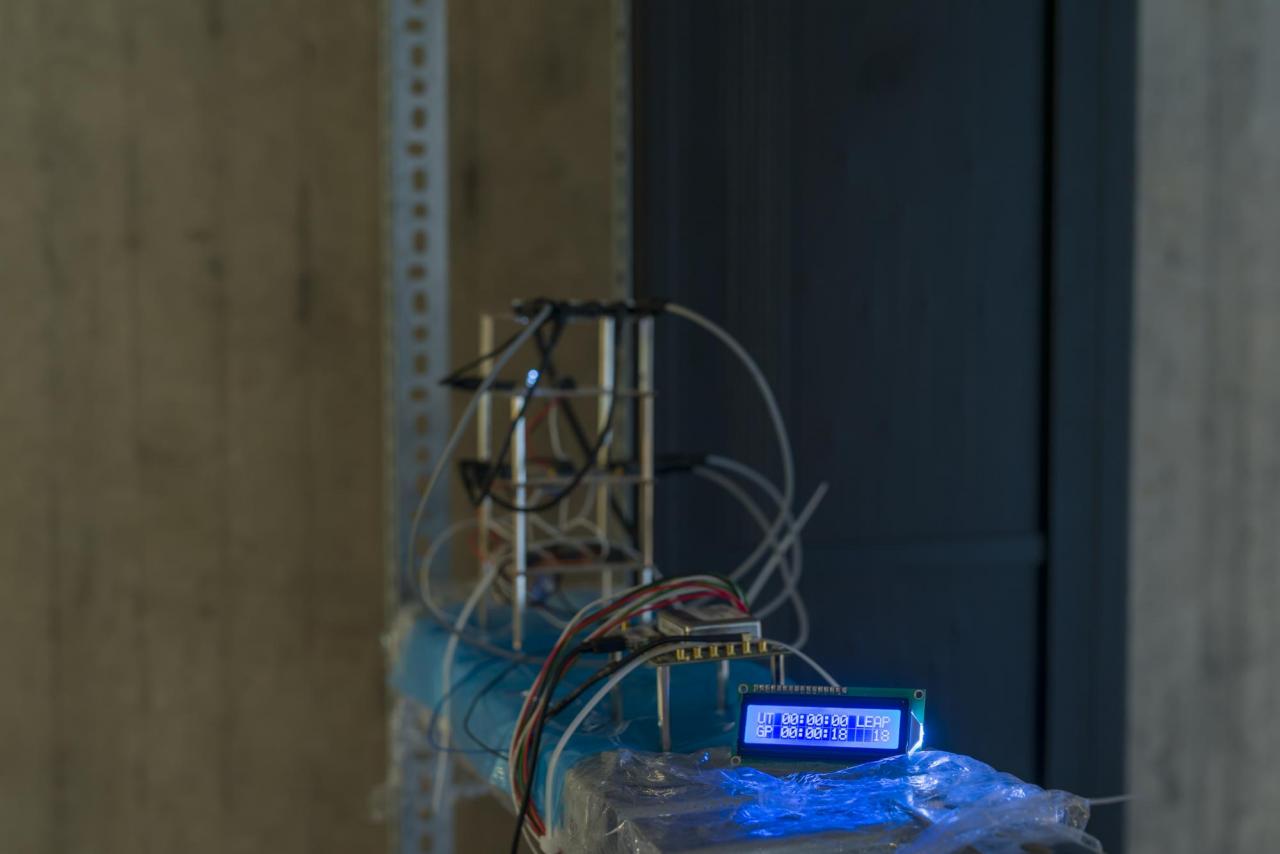 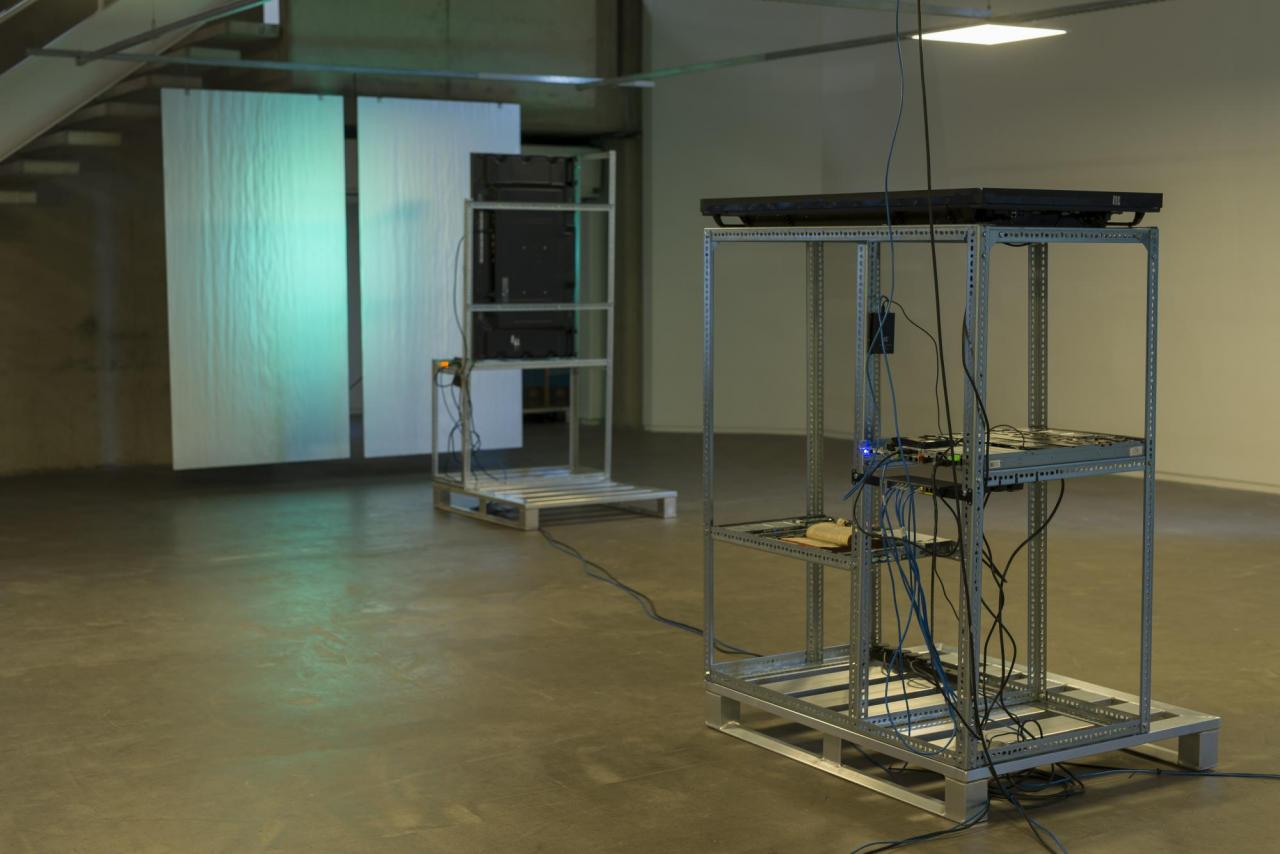 Killing time – it's not just a turn of phrase. The connection between state power, military force, and the measurement of time and space is more literal than we'd like to believe, observes Yuri Pattison in his latest show.

For the past decade, Irish artist Yuri Pattison has been interrogating the technological mediation of everyday life, and the modes of financial and political power bound up with it: global labour regimes, infrastructures of surveillance, and the securitization of urban space, to name a few. Although his practice never sat entirely comfortably within the vague confines of ‘post-internet art’, Pattison’s work shares that non-movement’s fascination with the digital world’s material infrastructures and aesthetic possibilities, even as it engages with weighty historical, geopolitical, and environmental themes. In "the engine", an exhibition of newly commissioned works at Dublin’s Douglas Hyde Gallery (DHG), Pattison focuses on the relationship between time, technology, and power, exploring how systems of measuring time underpin projects of political ordering. The exhibition shows a particular interest in excavating the ways in which the digital technologies embedded within our everyday lives are reshaping our worlds in profound – but often unseen – ways.

Given the exhibition’s thematic focus on time and authority, it’s fitting that the show was inaccessible to the public for five months (the majority of its installation time), in accordance with Europe’s most sustained Covid-19 restrictions, after briefly opening in December of last year. Pattison’s work speaks directly to the sense of temporal collapse that many reported experiencing during long periods of lockdown. This is evident from the outset, with the first work greeting visitors on entry bearing the title blursday (2020), a single-handed digital clock face showing the days of the week instead of minutes and hours.

This reference to the listless drift of pandemic-induced social isolation is only one area where Pattison’s work speaks strongly to the Covid-19 context. It has been much commented upon that the pandemic has increased our collective reliance upon digital platforms – for friendships, for work, for education, for entertainment, for care, for sex, for funerals – intensifying an existing tendency for social relations to migrate online. By zooming in on our technologically mediated social conditions, "the engine" questions the increasing role that digital platforms have in ordering and provisioning our lives, emphasizing the expansion of corporate and state power enabled through these new media frontiers.

In the main atrium-like space of the DHG sits an immersive multi-media installation, sun_set_pro_vision (2020-21), comprised of five video screens housed in a Dexion support structure. A central screen can be viewed from above on entry, whilst the remaining four screens are arrayed to face north, south, west and east. Each screen tracks the rise and fall of a simulated sun, moving in real time over a churning seascape generated by a game engine. The image responds to data fed into the system by an air quality monitor, with changes in carbon dioxide, radioactivity and other pollutants producing subtle shifts in the image’s composition, wave dynamics and colours. The data is fed live from an uRADMonitor, one of a number of networked environmental sensors located across the globe with the aim of producing an independent, open-source, real-time map of global environmental conditions.

Those with the tools to tell the time have the authority to write history.

Here, Pattison points to the abstract ‘environment’ that emerges from environmental modelling, a blurring of ‘real’ and ‘virtual’ worlds that is central to the public’s understanding of climate change (and governments’ responses to it). Yet this abstracted image of ‘nature’ is also instrumental in the reduction of complex ecosystems into ‘resources’ and ‘services’ that can be quantified, valued and extracted for financial gain. The uncanny ocean depicted onscreen is imbued with a quiet melancholy, the pre-set restlessness of its algorithmic sea underlining our lived alienation from the web of life.

Nearby, the gallery walls are hung with pairs of insulation panels emitting an anxious pacemaker throb (which suggest colour field paintings in the context of the DHG’s C20th brutalism). The uneasy pulse is transmitted to the insulation boards from another sculptural work, True Time Master (2019-2020), which uses a counterfeit McIntosh MC275 amplifier to render audible the usually silent Chip Scale Atomic Clock (CSAC). The CSAC was developed in the early 2000s by the Defense Advanced Research Projects Agency (DARPA), the US Defense Department’s secretive research lab, for battlespace use. The CSAC and similar devices are now embedded across our daily lives, from GPS and telecommunications to ships’ navigation and financial trading. The menacing metallic murmur that permeates the gallery space hints at the military-industrial forces and geopolitical tensions that subtend the smooth logistical surface of the West’s globalized consumption. These latent geopolitical anxieties resonate in the images of US military drones and troops in desert camouflage that linger in Chip Scale Atomic Clock promotional video (NVIDIA Super SloMo + waifu2x rework) (2020), a video sculpture lurking below the Gallery’s stairwell.

Another screen-based work, Dublin Mean Time (2020), lies on the floor at the lowest level of the gallery. The screen depicts Dublin’s failed Millennium Clock project – a digital clock placed in the river Liffey in 1996 to count down the seconds to the millennium, only to be removed a few months later for “technical reasons”. In Pattison’s rendering, the clock counts the seconds up from January 1st, 2000, measuring our passage into an uncertain future lacking the reassuring markers and horizons of obsolete C20th futurisms. Yet Dublin Mean Time rejects the old colonial notion that Ireland’s modernity is somehow questionable. Its title conjures the period from 1880 until the 1916 Rebellion, when Dublin had its own local ‘mean time’ within the system of Coordinated Universal Time. After the Rebellion, it was subsumed into the British standard, GMT, to facilitate smoother telecommunications between colony and metropole. Pattison’s suggestion, here and throughout the exhibition, is that keeping time and controlling space are inherently bound up together in the technologies of state power. Those with the tools to tell the time have the authority to write history. Yet Dublin Mean Time also asks what it would mean to step outside dominant modes of temporal authority – or, in today’s parlance, to decolonize time.

Dublin’s status today as a low-tax mecca for corporate tech Giants like Google, Amazon and Facebook hums as background context for "the engine". The hushed buzzing of computer processors and the whir of cooling fans gives the Gallery the aura of a data centre, a process-space for profits elsewhere. In recent years, the construction of data centres around Dublin to serve the ever-expanding demands of tech businesses has become a point of public contention, with local communities and politicians objecting to their development as socially and environmentally unsustainable. Indeed, the so-called ‘Silicon Docks’ that play host to these corporate behemoths lie just on the opposite side of the Trinity College campus from the DHG, and have played a key role in driving up property prices in the Irish capital, producing an acute housing crisis and accelerating inequality.

By bringing the mundane stuff of digital infrastructures into the gallery space, Pattison’s work focuses our attention on the systems of techno-power materially embedded within our daily lives. In other words, Pattison re-materializes the abstract systems of extraction, production and control underpinning our daily social relations. His work suggests that by attending to the materiality of contemporary technopower, we can begin to expose the ideological work that goes into separating us from the technological sinews of global power quietly structuring our everyday.

The question remains, however, as to how effective such strategies are, and how readily they may be recuperated.  A growing number of artists have sought to embrace immersion, identification, and mimesis as critical strategies, especially as the distance previously assumed to be a pre-requisite for critical reflection is increasingly unavailable. However, it is unclear how much traction critical art practices have when the modes of critique and objects of critique share a material and aesthetic substrate. Is there a risk of slippage between exposing systems of power and simply reflecting them? At a moment when polemic is a dominant tenor of analysis, it is perhaps to Pattison’s credit that these ambiguities are retained, visitors left to follow the electric cables to their own conclusions.

RORY ROWAN is Assistant Professor of Human Geography at Trinity College Dublin where his current research focuses on the development of commercial activities in outer space and theories of planetary environmental governance.