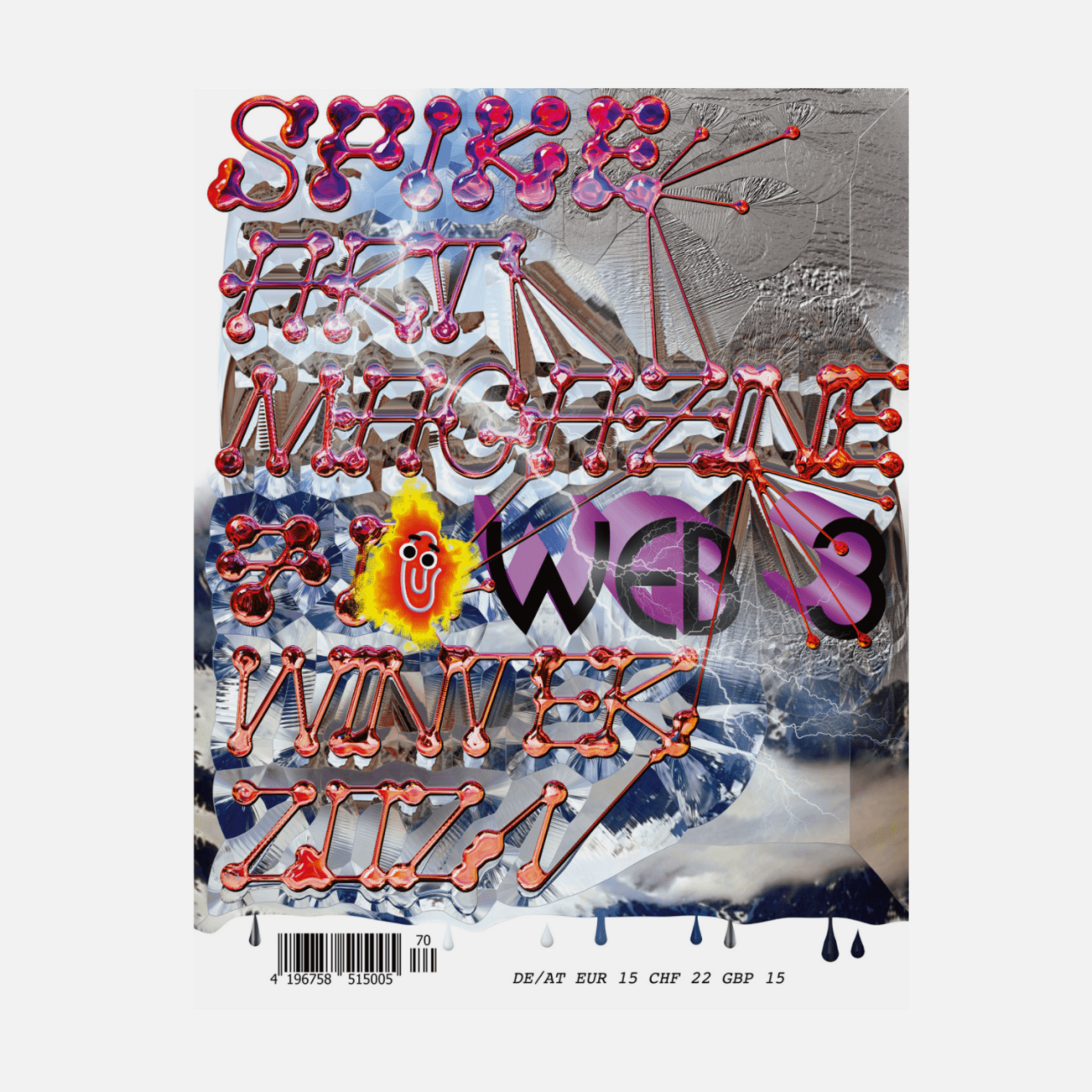 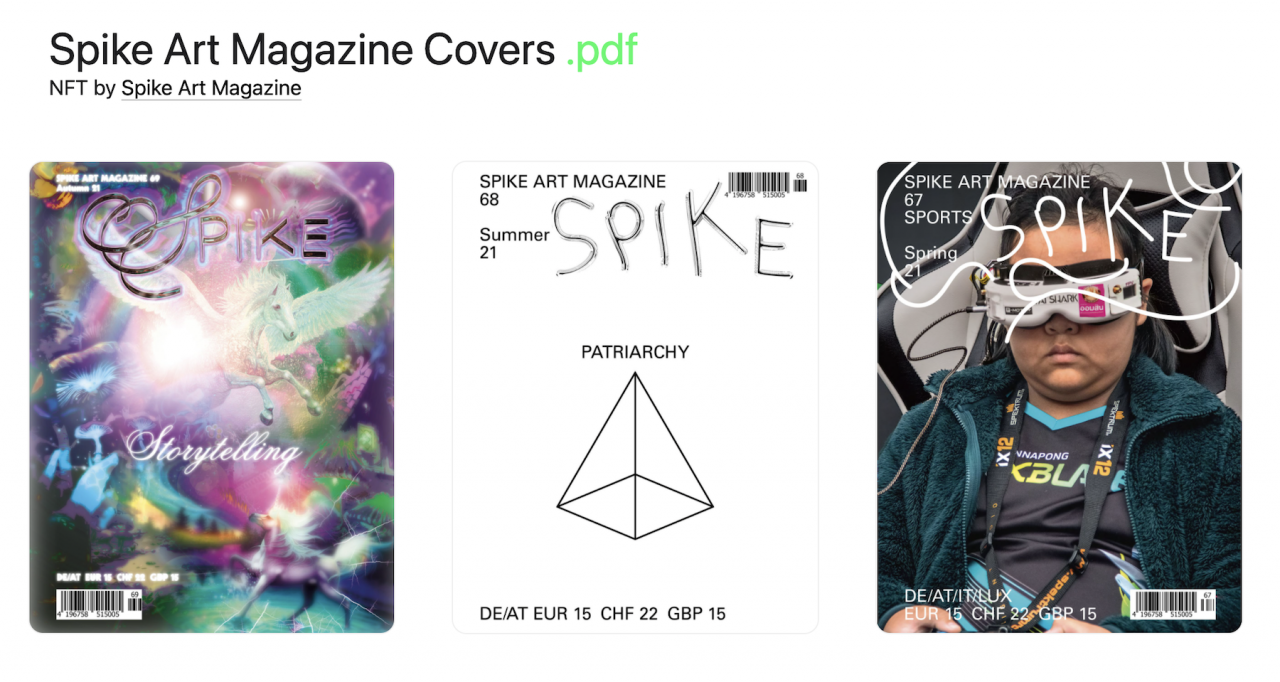 Late last week, as Berliners remembered what the sunlight felt like, Spike stayed inside and went where no other art magazine has gone before: directly onto the blockchain. Following the release of Spike #70: Web3, we saw it fit to experiment with minting and selling some NFTs of our own. (Still wrapping your head around that godforsaken acronym? Start here.) With the help of left.gallery, we launched our entire cover archive into the InterPlanetary File System (clarification: there are no actual rockets involved, but, nice image) and christened them as a series of seventy unique cryptographic tokens.

In all honesty, we weren’t really sure what to expect. How would our audience, which ranges from crypto-cheerleaders to the coldly offline, receive this next step into the waters of Web3? Would the whole project be derided as a transparent cash-grab, or would supporters come to the fore, eager to experiment with new ways of funding independent media? A few errant tweets aside, the reception (to our faces, at least) has been warm, suggesting that we’re collectively capable of holding enough space for nuance to consider that 1) NFTs are sometimes troubling *and* 2) they can still have meaningful use-cases worth exploring. This is precisely the tension we sought to capture in our Web3 issue – and engaging directly with these kinds of questions, rather than merely approaching them with a distanced, intellectual reserve, is right in line with Spike’s ethos as an artist-run publication.

So, cautiously eager and critical faculties a-blazin’, we kicked things off with a 24-hour auction for the cover of Spike #70 – the issue that got us into this circus in the first place – on Zora, where it eventually went to whistlegraph.eth for 0.3 ETH. There wasn’t much of a bidding war, but that didn’t stop our intrepid digital editor, overcaffeinated in front of an external monitor turned vertically like a Bloomberg Terminal, from nail-biting in time with the rhythm of our eventual buyer’s enigmatic-yet-irresistible TikTok videos as the clock ran down.

This was an exciting sale, not least because Whistlegraph’s public NFT collection also includes Emily Segal’s KNOTS and multiple Channel Season 0 Founder Tokens. Both of these projects represent thoughtful experiments in funding independent media – Segal’s publishing imprint Deluge Books and the New Models x Interdependence x Joshua Citarella podcast nexus, respectively – through crypto. Being collected in such good company, it feels like our intentions and vision for this project, working towards similar goals, came through.

Following the auction, left.gallery opened minting for the remaining 69 covers in chronological order, all at a fixed price of 0.1 ETH. As of this writing (the afternoon of 30 March), 52 of them have been minted, and the last handful remain up for grabs!

You can get one here before they mint out, if you’re so inclined, and view the ones that have already sold on OpenSea.

We were fortunate to approach this foray into making NFTs under the guidance of left.gallery’s Harm van den Dorpel, a true OG, who announced over the weekend that this sale will be the final project at the gallery, which launched with an event at Spike in 2016 – a bittersweet “full circle” moment.

It also felt fitting that the auction for cover #70 unfolded on Zora. Their approach – building genuinely open infrastructure for NFT sales – is in step with the values we most admire in the Web3 space, pushing towards the best-case outcomes for this nascent technology. (For more on this, Zora cofounder Jacob Horne’s essay on “hyperstructures” lays out the features and values that new Web3 protocols ought to embrace – expansive, permissionless, and positive sum value among them.) As we learned from the conversations throughout our Web3 issue, it’s uselessly reductive to generalise wholesale about the aesthetics and politics of cryptoart – that’s painting with an overly-broad (pixel) brush, and it’s a bad-faith gesture when new potential is begging to be posited – but it’s been rewarding and generative to take our first steps into the space with people and platforms that foreground the values we hope will shape these still-quite-early technological tools well into the future.

Want to support Spike’s first foray into cryptoart? View the existing NFTs on OpenSea, mint one of the remaining covers from left.gallery, or buy a copy of our Web3 issue.

Spike covers on sale as NFTs. Screenshot from left.galley