Various Others Munich 2021
by Adina Glickstein 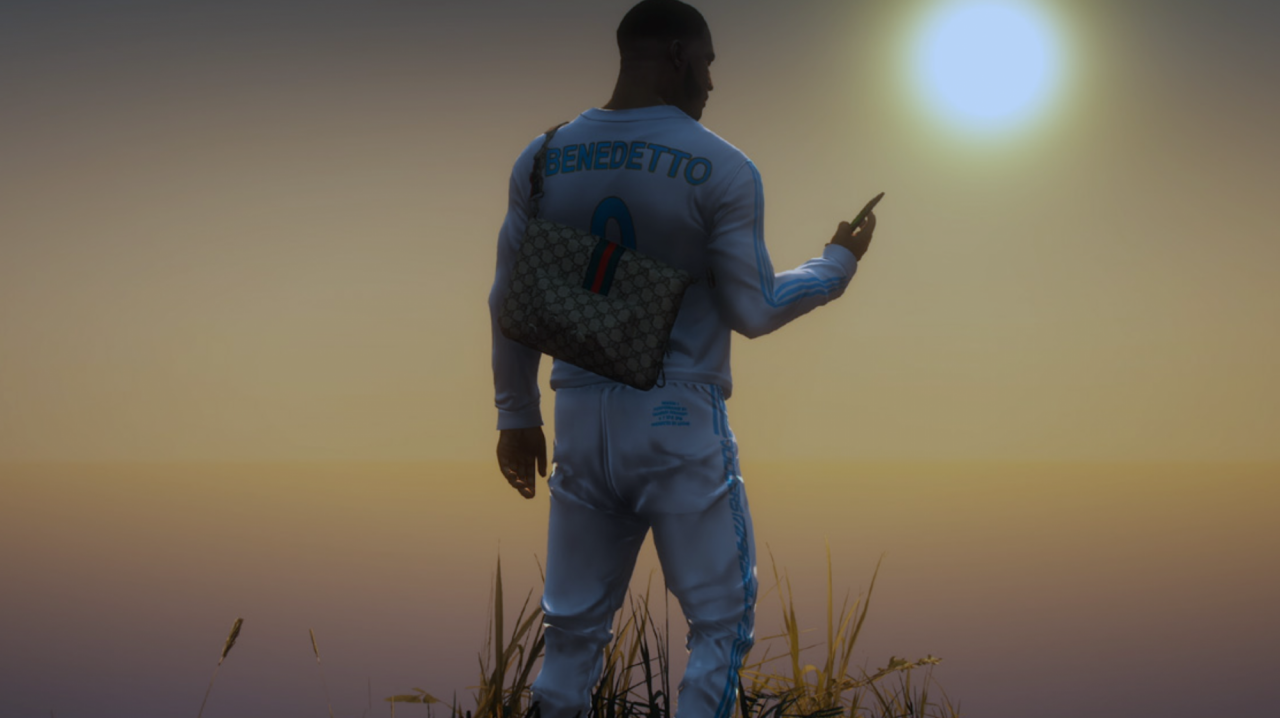 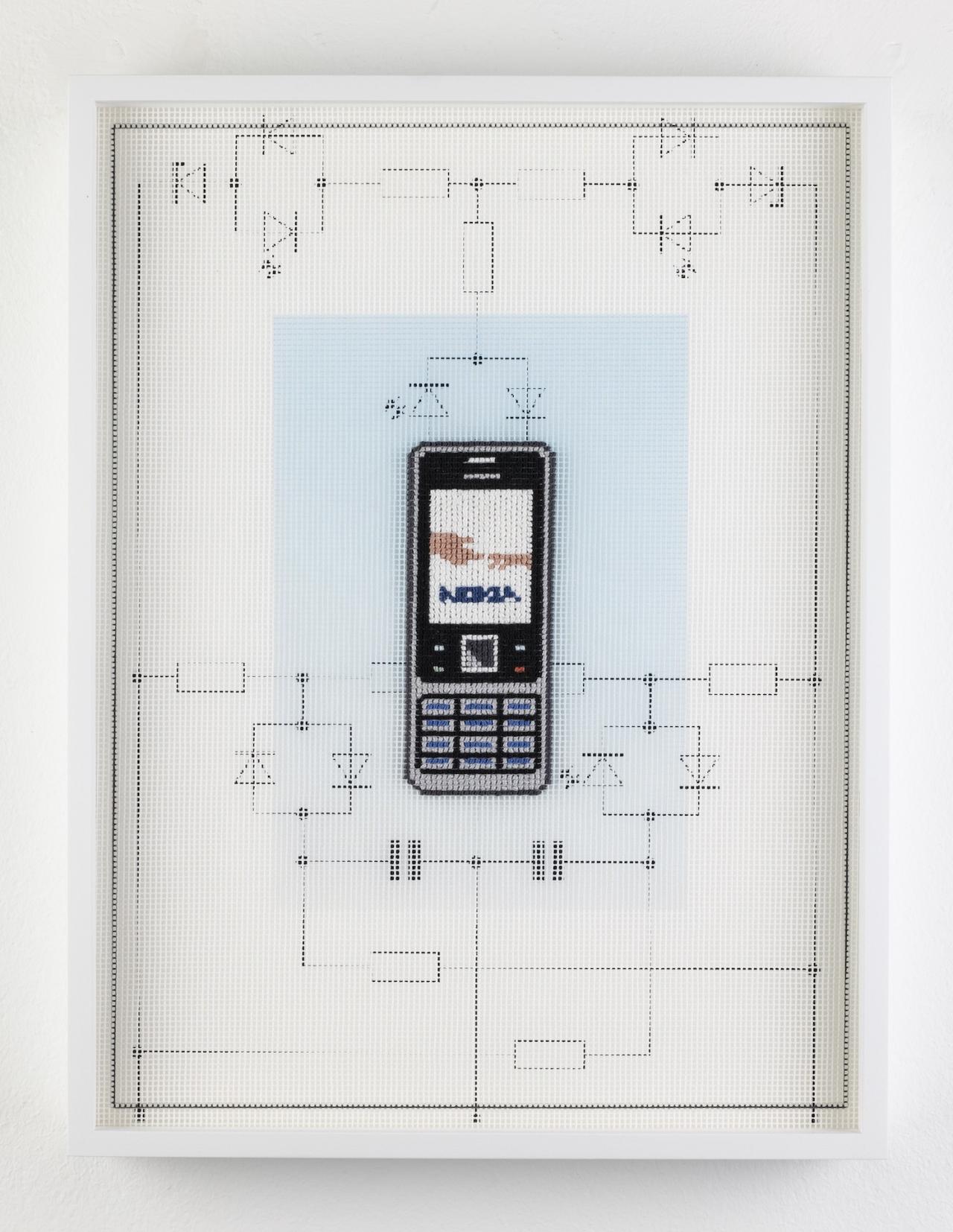 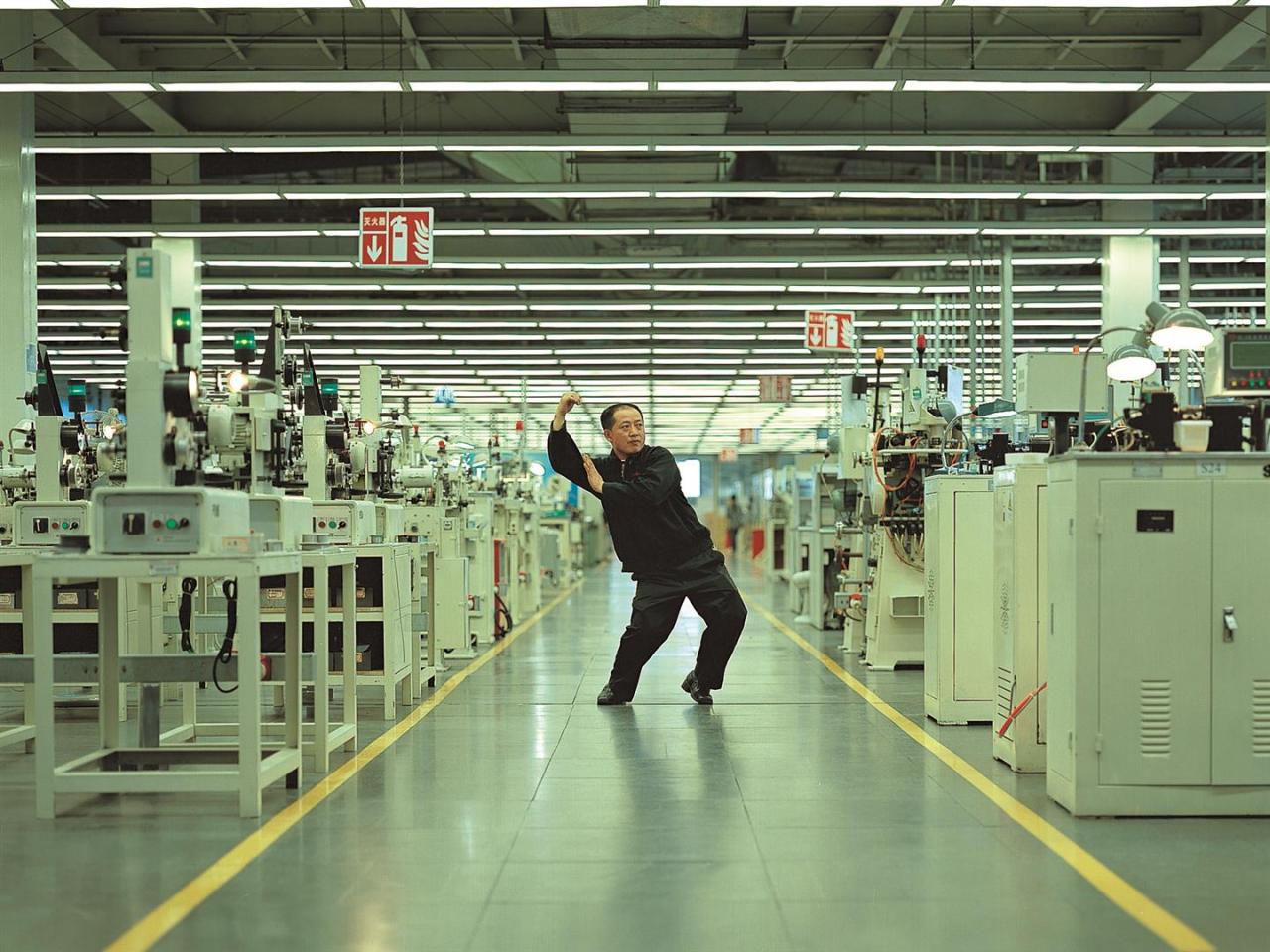 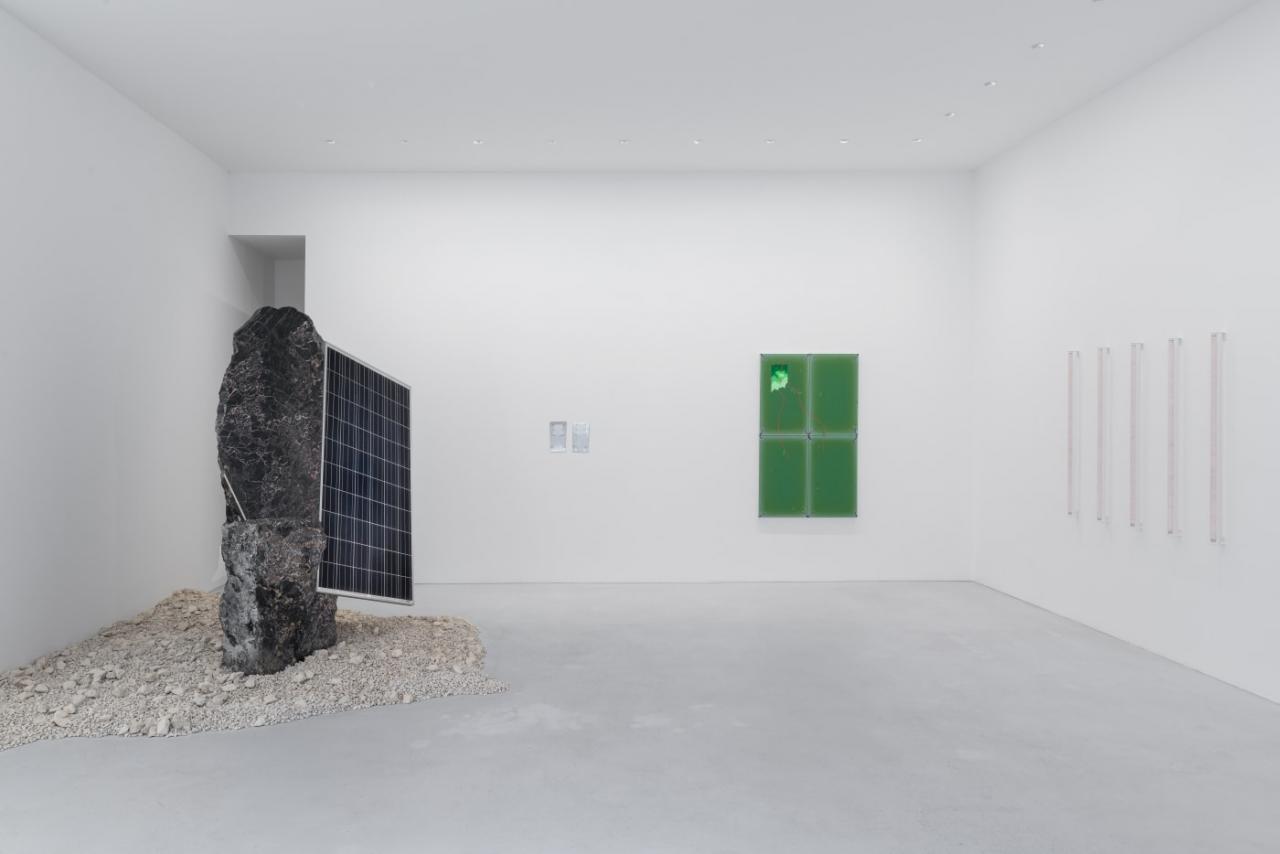 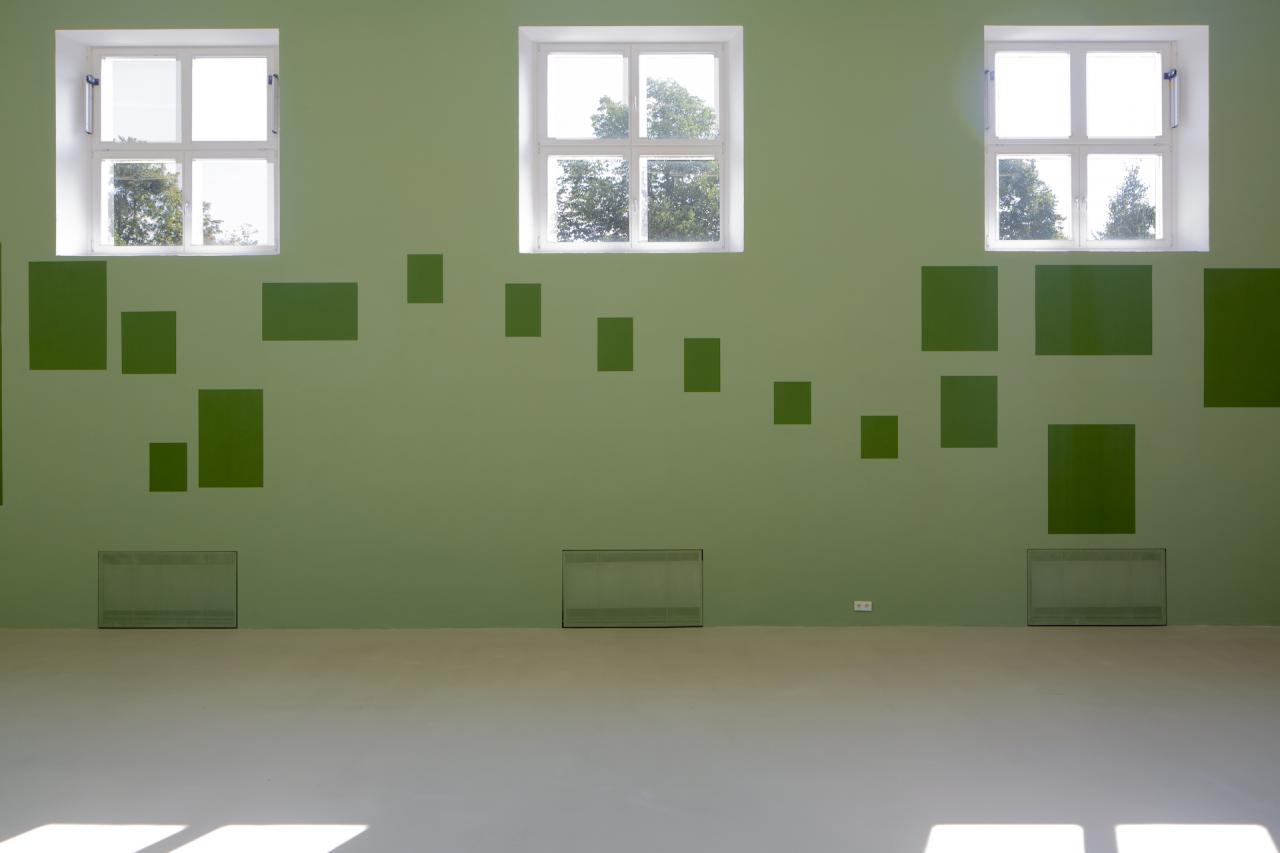 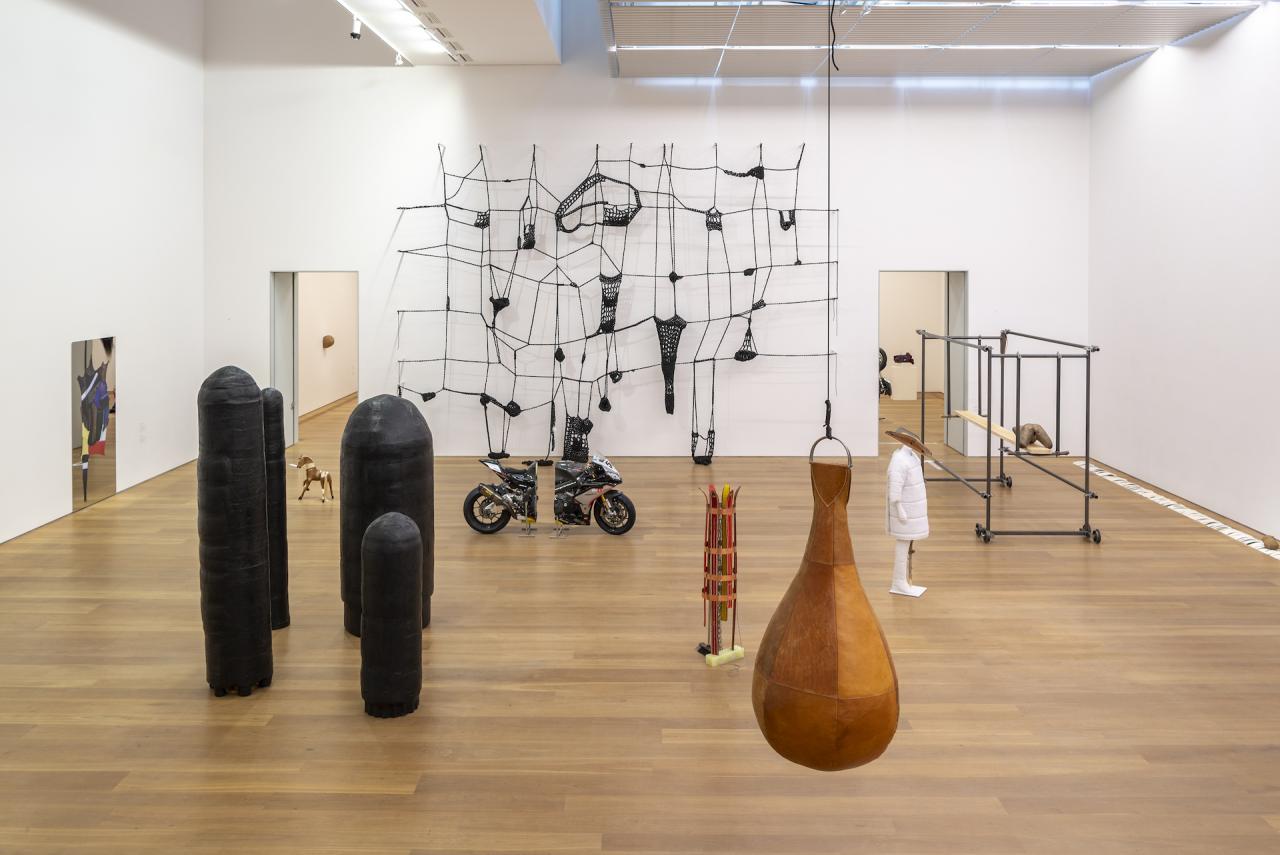 Never having previously seen a Ferrari in the flesh, my first trip to the Bavarian capital proved illuminating. For the opening weekend of “Various Others”, a citywide initiative presenting an international programme distributed across local art spaces, I motored (okay, train’ed) to Munich for a weekend of culture set against the backdrop of some very sleek cars. Our first pit stop was at Nir Altman, where, in collaboration with Parisian gallery Crèvecœur, Sara Sadik’s Khtobtogone (2021) was on view in the glammed-up basement of a repair-shop-turned-bar. The video, made of screen-capped scenes from Grand Theft Auto, is a touching (I dare not, for fear of overdoing it on the car puns, call it “moving”) portrait of a semifictional young man in Marseille whose daily life as a bike-bound delivery driver is interspersed with real reflections on love and labour.

Presented in this actual garage, the lower-level viewing room tucked beneath Nir Altman’s regular space was bedecked with fake flora, echoing the pastel tropics of Sol Calero’s paintings upstairs. Car culture has taken a lot of flack in our era of climate trouble, but here, engines and ecology coexist in harmony. In that spirit, the International Motor Show – Europe’s largest automotive trade show, which descended on the city at the same time as our visit – recently rebranded, I learned, as the International Mobility Show, expanding to include luxury bicycles and other, less carbon-intensive wheeled modes of transit.

Later, after elbowing through the throngs gathered in adoration around a Mercedes at Marienplatz, we found our way to Galerie Klüser 2. I delighted in Lilly Lulay’s Early Digital Tech, Artifacts from the Age of Acceleration (all 2021) – embroidered renderings of an Atari joystick, an eyeball-esque Logitech webcam, and a Tamagotchi pet, among other devices lost to the media-archaeological graveyard (a pocket calculator from 1976, the earliest object depicted in the series, recalls the one that sits on my dad’s desk to this day). These charming odes immortalise the fallen soldiers in the battle of planned obsolescence. Colourful and campy, they’re nonetheless undercut by a certain nostalgia : what has become of the iPhone 4, of the first-gen AirPods, that she takes so much care to stitch out by hand? Meandering through the rest of “Feature Extraction – Photography as Raw Data”, co-presented with Kuckei + Kuckei, I meditated on the unknown fate of my first-ever iPod Nano, uneasy with the knowledge that it’s probably parked on some e-waste heap in the Global South today. Props to those, then, who manage to keep these devices’ memories alive – like Lulay and math-nerd dads everywhere – re-inserting some lost awareness into the perpetual cycle of upgrading and discarding.

Cao Fei’s Whose Utopia (2006), on view at Espace Louis Vuitton through 2022, was similarly sensitive to tech’s human toll. The video, a comparatively rare live-action doc from Cao’s famously Second Life-heavy oeuvre, pictures the workers at a lightbulb factory in Foshan, China, an industrial zone in the Pearl River Delta. After seeing her own hometown of Guangzhou transformed by industrialisation some years earlier, the artist took up a six-month residency at the factory, interviewing employees with the aim to produce a film that counters the lack of individuality – and, by extension, agency – usually afforded to production-line workers in the media imaginary (when they’re even depicted at all).

Bulbs and tubes are whisked through the frame as the controlled chaos of the shop floor plugs infinitely onwards; meanwhile, the workers live out a (fictionalised) “Factory Fairytale”, dancing ballet and playing electric guitars at their stations. Machines chug all around them as they face the camera in white T-shirts, their chests bearing Cantonese characters that collectively spell: “MY FUTURE IS NOT A DREAM”. It’s like the technicolour forays from Lars von Trier’s film Dancer in the Dark, but real and sans-Bjork, which makes its image of precarious work all the more difficult to swallow. The symbolic thrust of their product? Enlightenment always comes at a cost.

Conveyor belts, production lines, sidewalks, and speedways: the weekend was packed, the (unofficial) through-line of technological acceleration mirrored by our bodies’ movement through the city. All with good reason – there is so much to see, too many highlights to name. Lightning round of honourable mentions: “Inventing the Past” at max goelitz (which I’m told is not an intentional reference to the accelerationist manifesto), where Haroon Mirza mounted solar panels on a boulder, fashioning it into an instrument that viewers can play by walking by and disrupting the flow of sunlight; Birgit Brenner’s ink drawing of a courier pigeon (a mode of transit not represented in the Mobility Show) emblazoned with the aphorism “TRADE: ONE IN A MILLION” for Walter Storms’s collaboration with EIGEN + ART; Zsófia Keresztes’s pastel-tiled vulvic forms bound in shibari ropes, splayed on the floor at Sperling.

And Bea Schlingelhoff’s takeover of the Kunstverein München, suffused with absence, is a vital counterpoint to all the revving engines. Slight and considered, her installation comprises a handwritten edit of the institution’s governing documents, officially atoning for the Kunstverein’s role in the Degenerate Art exhibition of 1937. The walls are unadorned save for green ghosts where confiscated paintings once hung, compelling a moment of pause as visitors ascend the stairwell into the gallery’s expanse. It’s breathtaking, a requisite beat for reflection. Moving forward, after all, is best served by first taking stock of the past.

The last stop of the weekend issued a final (and macabre) reminder to be wary of unchecked acceleration. Front and centre in Alexandra Bircken’s survey at Museum Brandhorst, a racing bike (RSV 4 [2020]) has met an unfortunate fate. Perfectly bisected, its guts are now exposed, its steel exterior stripped and reconfigured with surgical precision. Storm (2013), a stuffed leather suit lying prone on the gallery floor a few rooms over, could just as well have belonged to its unlucky rider. The implication of impact, captured as a freeze-frame in Bircken’s sculptures, haunts the museum’s basement, eerily quiet, aside from the hum emanating from a screening room tucked behind the stairwell. Technostrick (2016), a looped video of a knitting machine pictured in close-up, forms a soundtrack to the speculative scene of the crash. The device’s carriage zooms back and forth, stitches accruing row after row ad infinitum. Is it a metronome or a countdown to the Big Event? Either way, it’s equal parts assuring and anxiety-provoking; an index of time’s unstoppable onward march.

ADINA GLICKSTEIN is the digital editor at Spike.