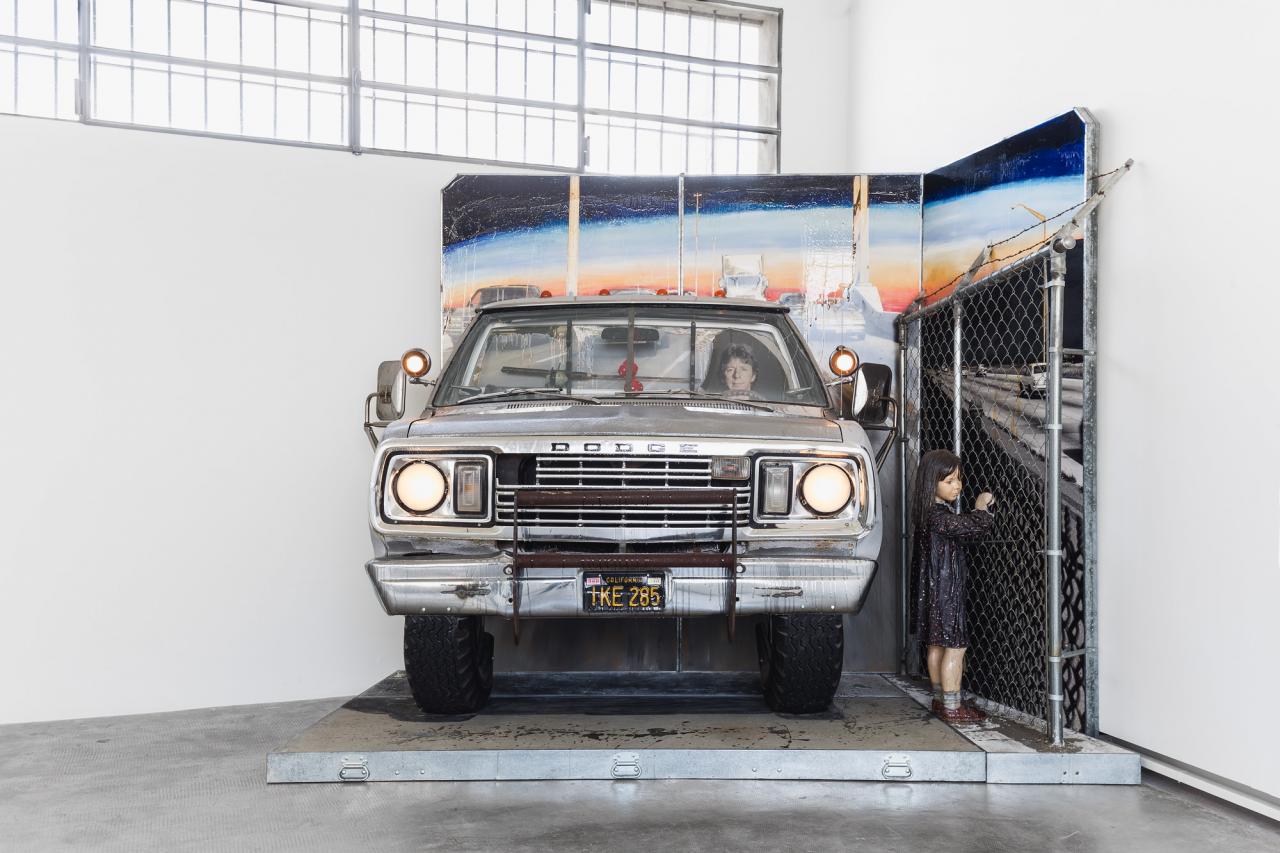 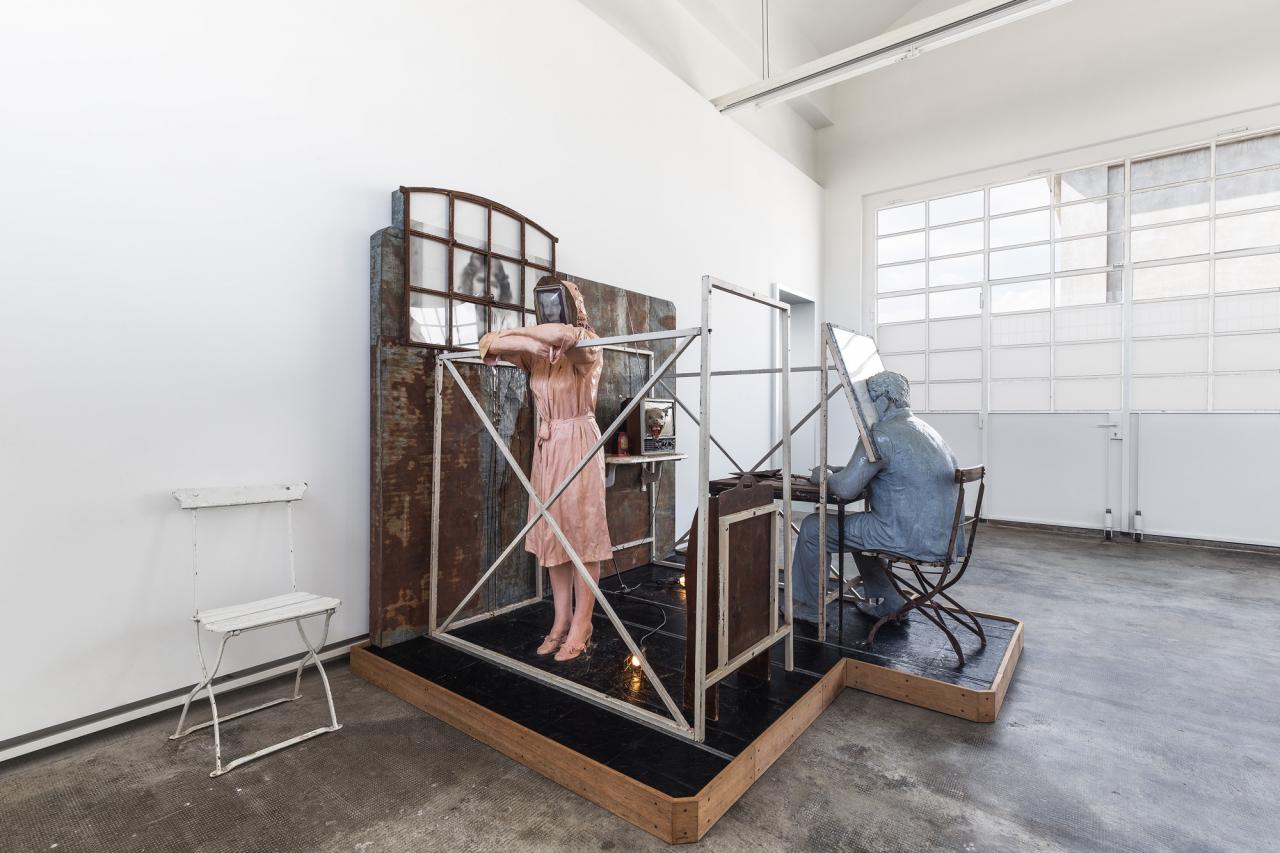 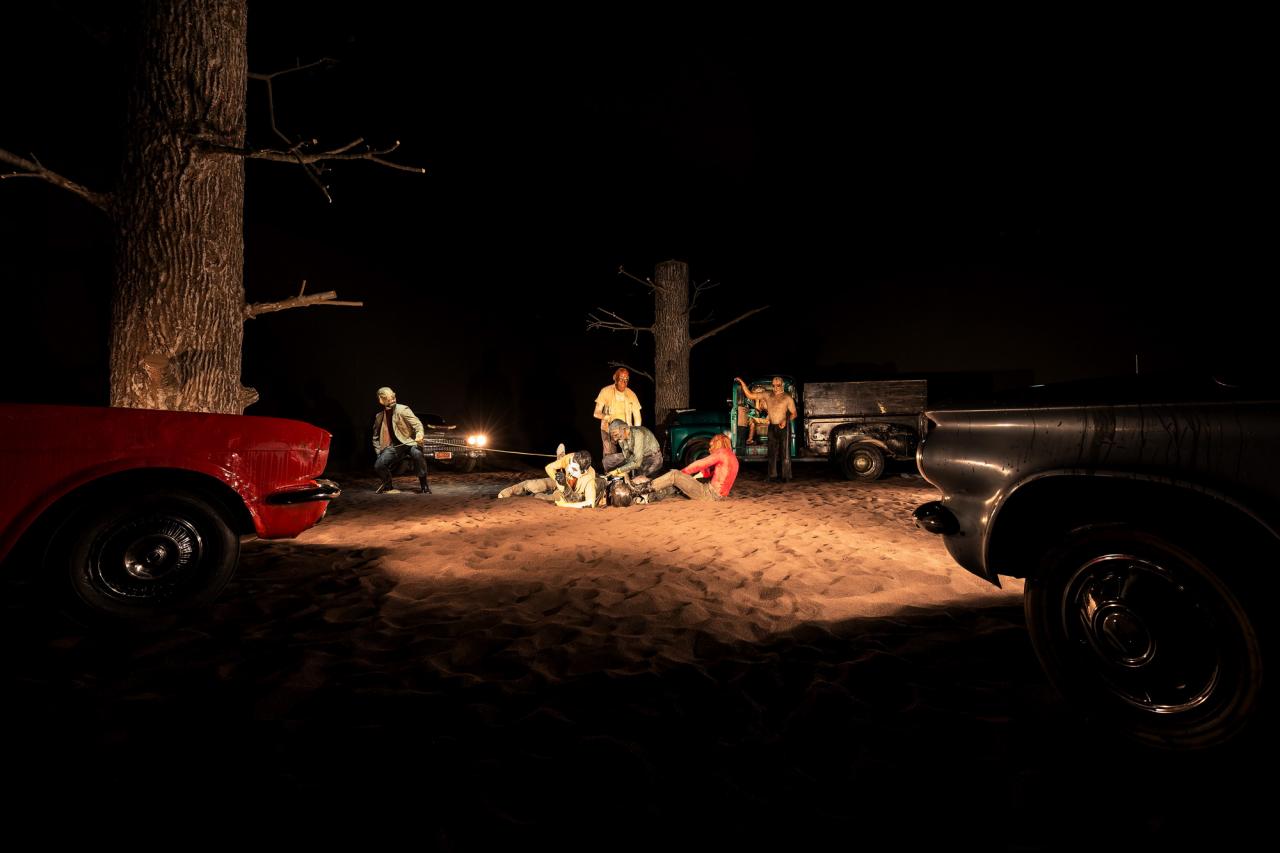 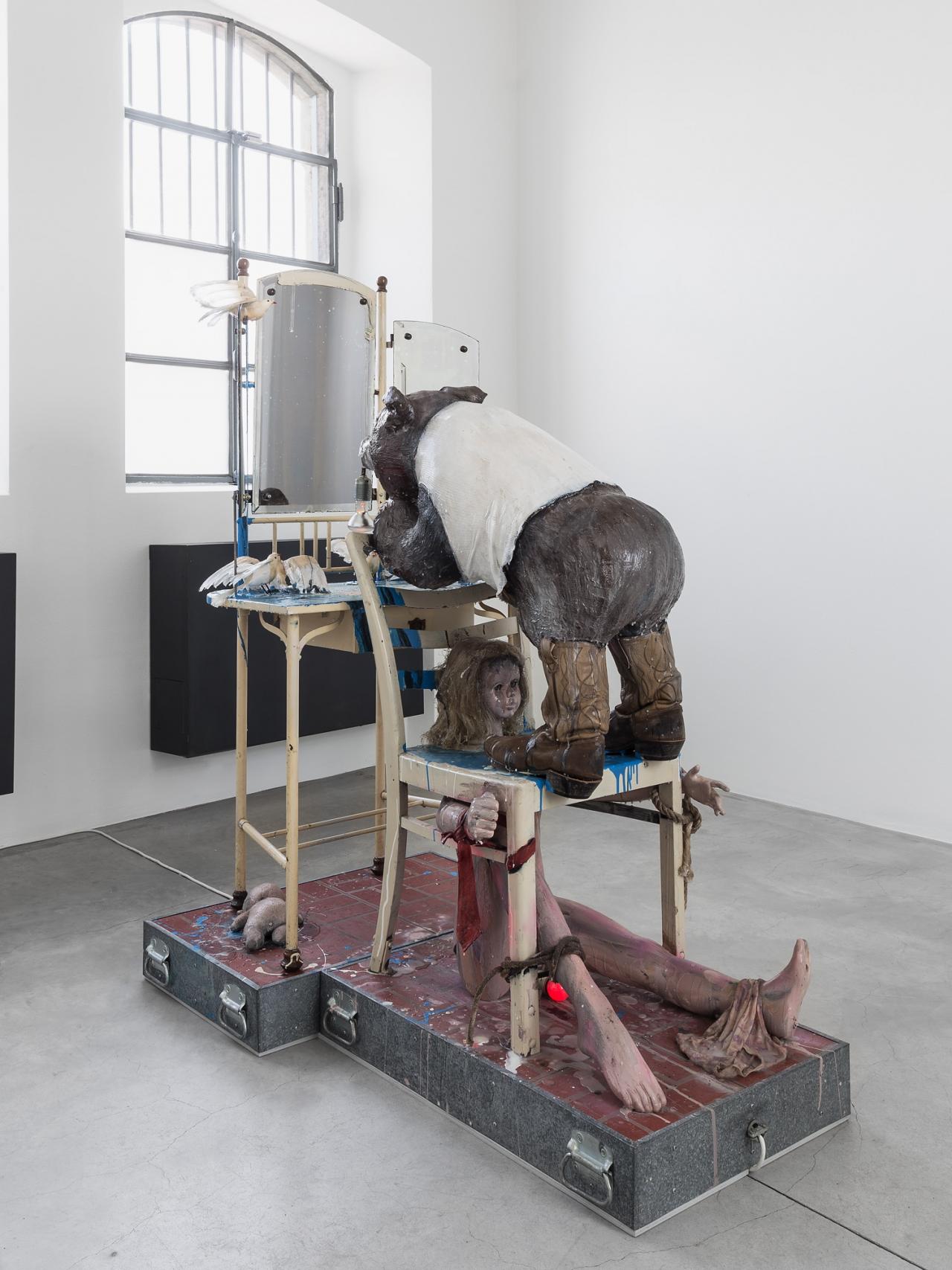 This is roughly how it goes: A gallery guard escorts you the first several feet into the room, pointing a flashlight down at the sand. Then you are alone. It isn’t clear how far you can go into the ring described by the headlights of the cars, and then, it isn’t clear how far you want to go into that bright circle of the most abhorrent human darkness. Whether you will lean in to inspect the barbarity, or whether you will make like a woman sitting in the passenger seat of one truck and retch into your hands.

When Ed Kienholz’s Five Car Stud (1969–72) was shown to wide acclaim at Documenta 5 in Kassel in 1972, most European critics thought it was too audacious for the culturally benighted USA. But the supposed backwardness of the USA was not the reason for the work’s long absence from American soil, which was largely due to its purchase by Japanese collector Katsumi Kawamura shortly afterward. After languishing in storage for nearly forty years, Five Car Stud was exhibited at the Los Angeles County Museum of Art in 2011, and then again in Denmark the following year. The Prada Foundation bought it soon after, and this year presented it as the crowning installation in a sequential gauntlet of works produced by Ed and Nancy Reddin Kienholz, who began making work with Ed Kienholz in 1972, and participated in the restoration of her late partner’s harrowing opus.

The exhibition moves from the early relief ‘Ore the Ramparts We Watched, Fascinated (1959), a shadow box of doll parts and electronic miscellanea with a faint ground of nuclear obliteration, and Bronze Pinball Machine with Woman Affixed Also (1980), whose immoderate send-up of sexual objectification is rather too on the nose, to the Kienholzes’ more elaborate tableaux, which unflinchingly treat themes of child abuse, social injustice, racism, imperialism, religious indoctrination and corruption. Particularly affecting is the depiction of a desperate domestic stalemate in Bout Round Eleven (1982), in which life-sized casts of the artists disregard one another in the schematic scenery of a living room, while a dog snakes its snarling head out of the TV set.

But the apotheosis – of this show, if not their entire oeuvre – remains Five Car Stud: the tableau of a gang of white men castrating a black man. His face is fixed in a bronze shriek, as the sixletter epithet, spelled out in colorful foam letters, floats in the open basin of his torso. The rest of the exhibition, including a room of documentation and a sizeable presentation of multiples that Kienholz made in connection with the work, is blown away by the gust of the gut blow coming from the installation. That you can wander it freely it, move close enough to read the license plates, to inspect the clothing, to note, with an unnameable loathing, that most of the men wear wedding rings – this drives home the vast and comfortless distinction between the moral pose of the art viewer and actual agency in the face of atrocity. Simply put, your conscientious observation saves no one.

In light of the recent “return to figuration” in the work of contemporary artists like Josh Kline and Stewart Uoo, following a generation including Cathy Wilkes and Matthew Monahan, the Kienholzes’ legacy is beginning to look clearer, their tableaux less anomalous. Like Duane Hanson’s quiet class critique of art institutions, and George Segal’s more evident politics, arrested in the intermediary medium of plaster, the Kienholzes’ tableaux took up political functions once served by public monuments – recasting them at a human scale that maximizes empathy, even as their immobility declares empathy’s limits for change. As the US and Europe are frothing with violent bigotry, Five Car Stud feels like a horrible portent, and an even more terrible likeness of the spectator’s powerlessness.

"Kienholz: Five Car Stud" is on view until 31 December 2016.
www.fondazioneprada.org

JOANNA FIDUCCIA is a critic and writer based in New York.