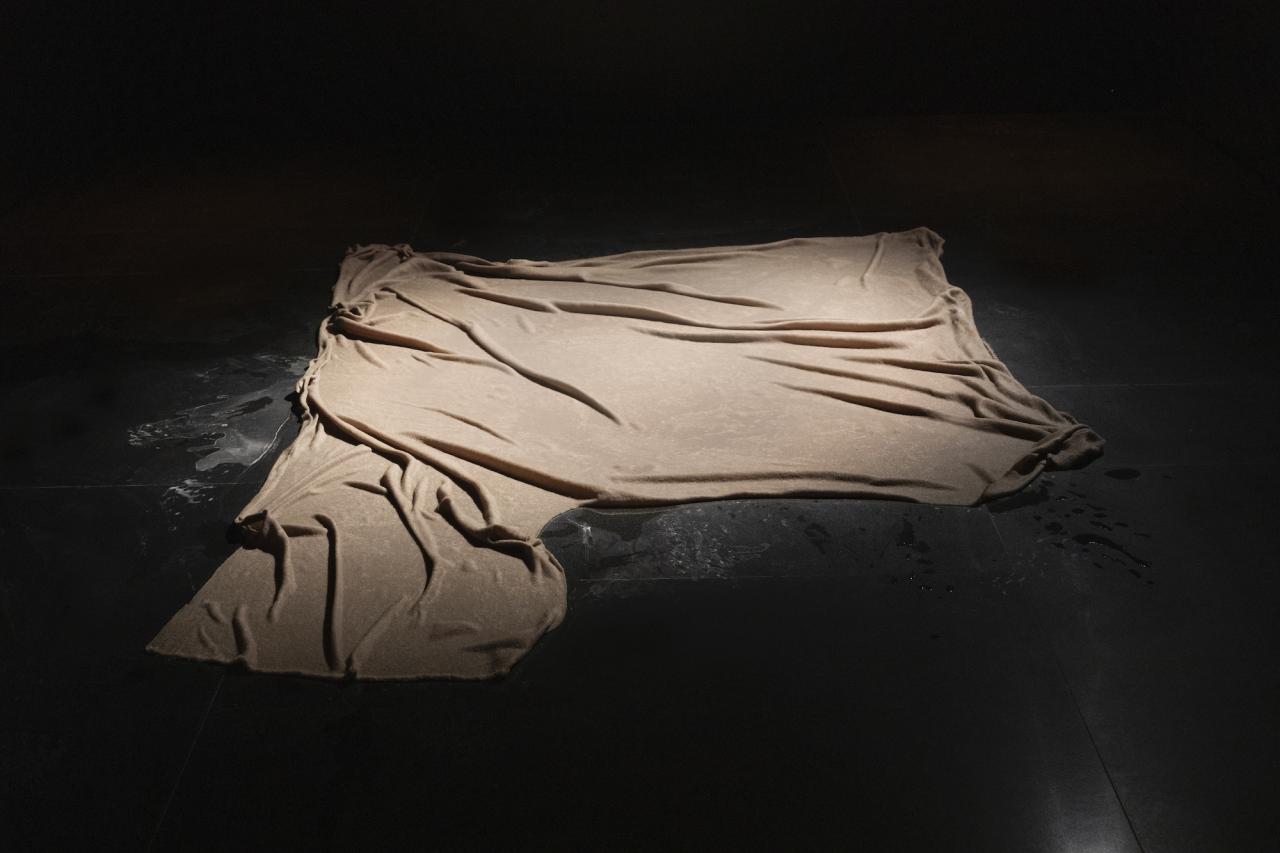 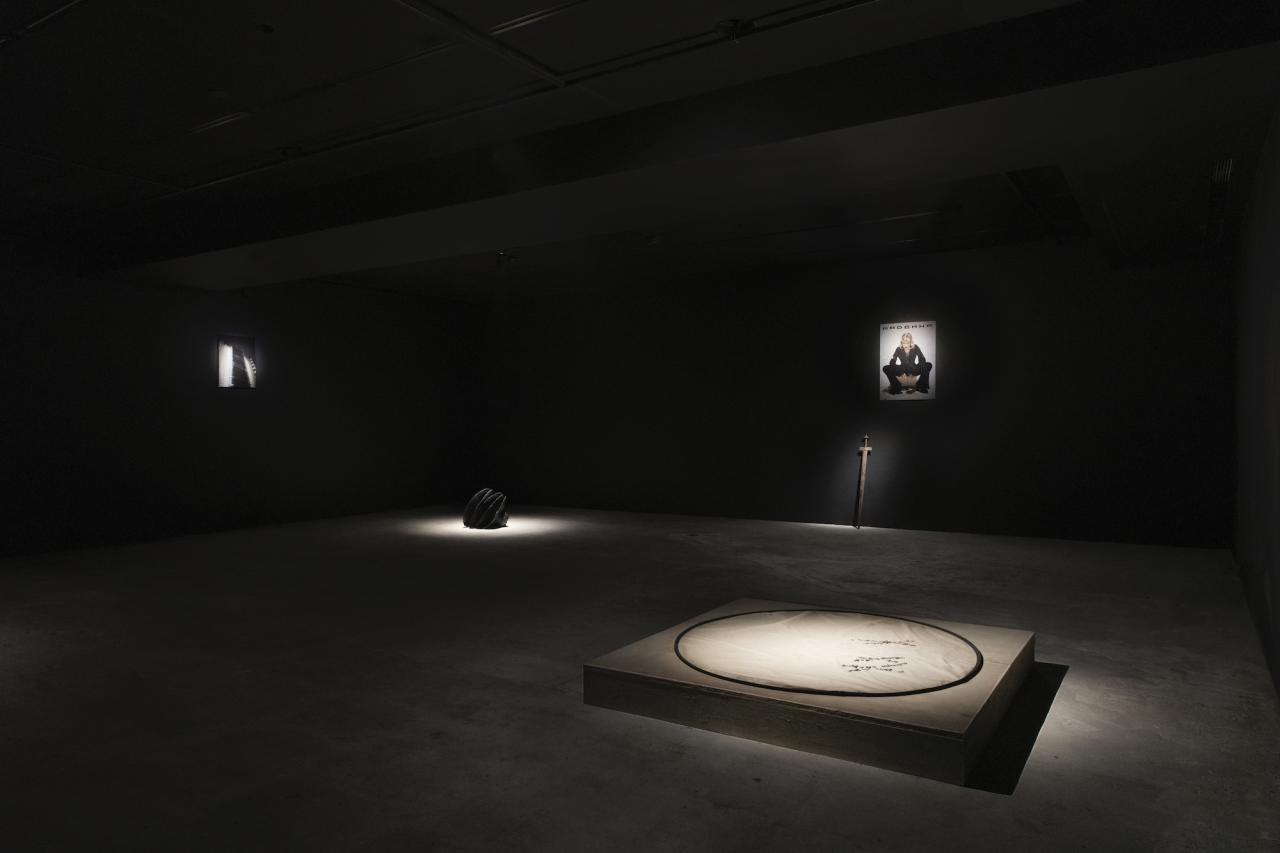 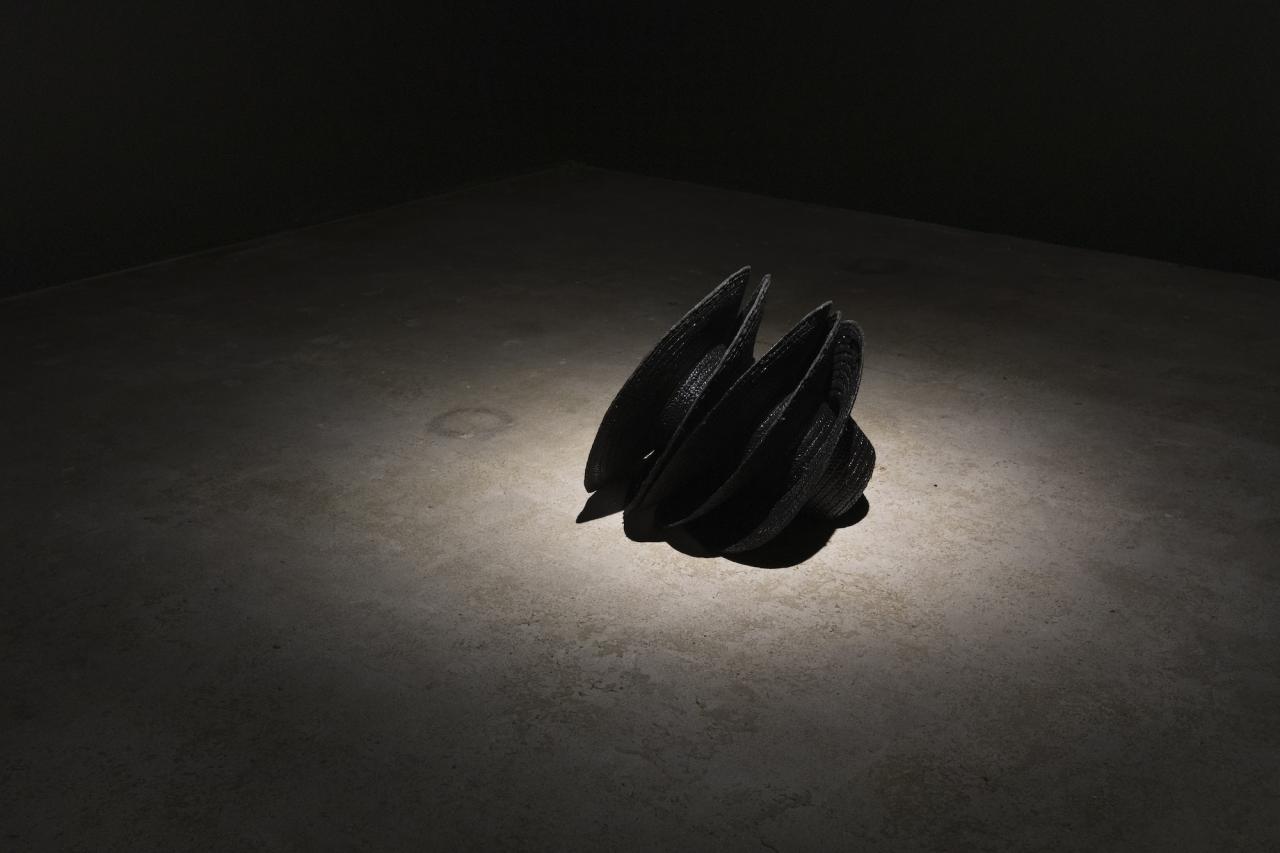 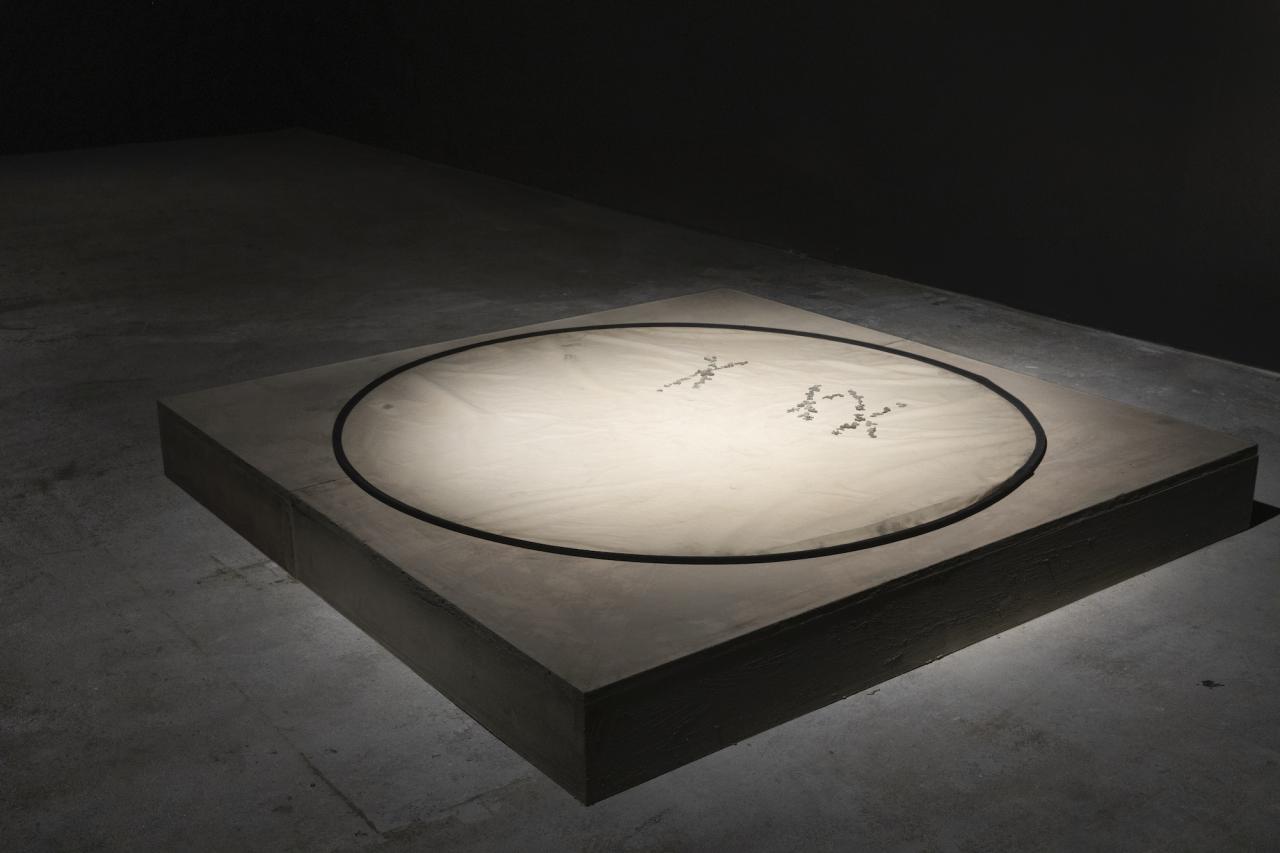 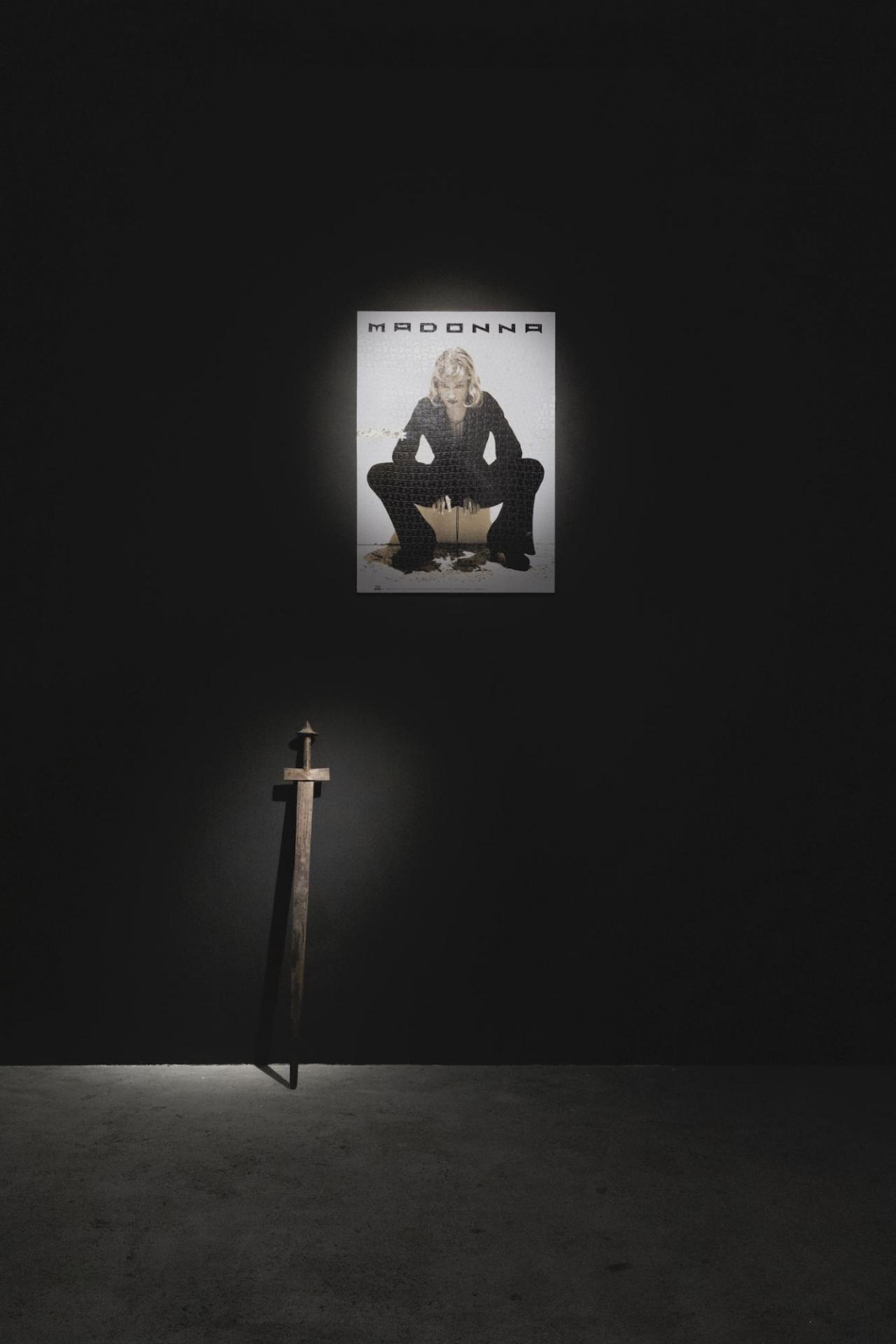 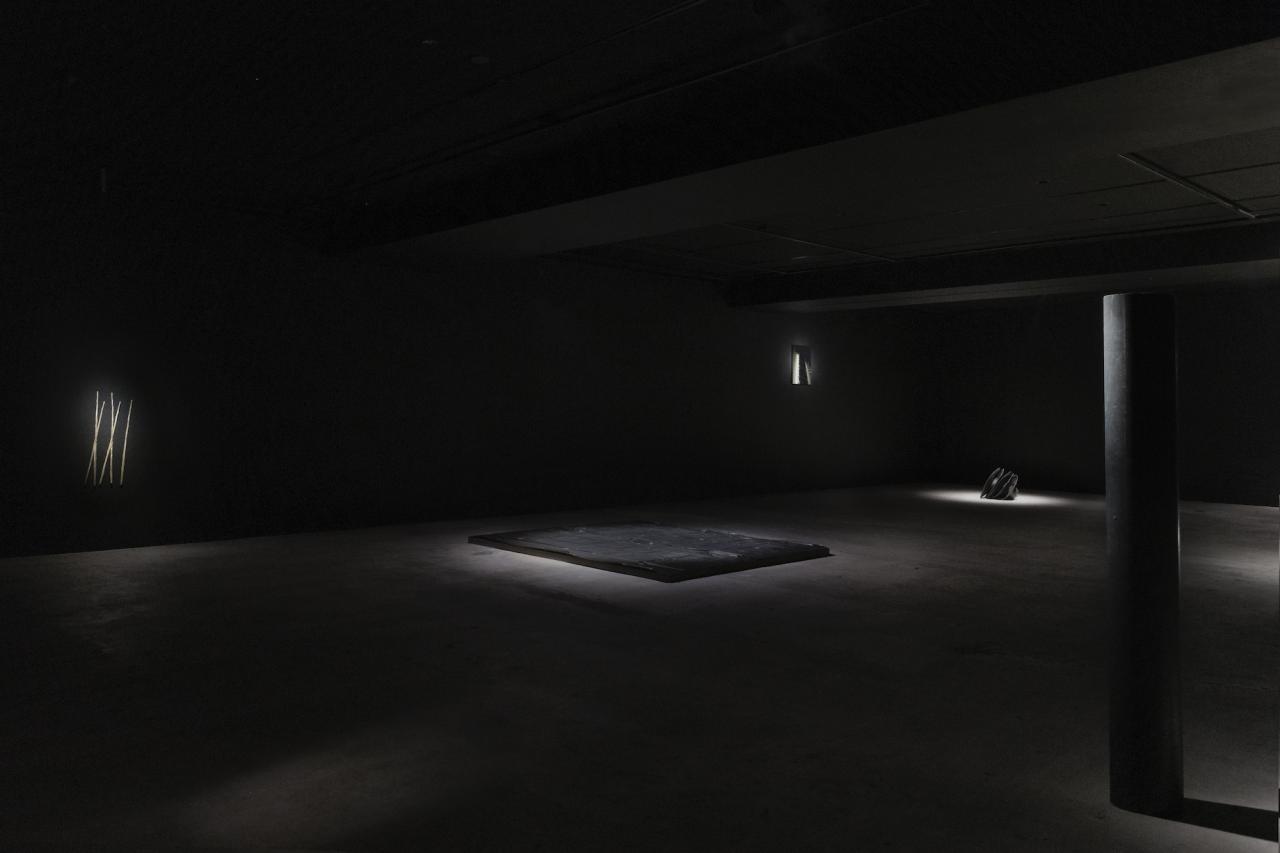 I had not envisioned spending my Saturday night looking up body bags on Amazon, but that’s what I found myself doing after encountering Vunkwan Tam’s Untitled (The traffic noise arched over a bubbling mass of public conversation and pattering footsteps on concrete) (2021). Part of the Hong Kong artist’s solo debut, “F,” at Empty Gallery, the floor-based arrangement consists of twin black body bags that Tam bought on an e-commerce platform. This work is characteristic of his recent practice, which often melds found images and objects with elusive titles drawn from various texts, including the artist’s poetry. Visually spare but densely associative, “F” brings together installations and assemblages that loosely coalesce around themes of death, decay, and late-capitalist malaise.

Bringing body bags into an art space could easily come across as cheap and calculated to shock, but the formal simplicity of Untitled (The traffic noise…) belies its nuanced evincing of banality and commodification, of death subsumed under the imperative of same-day delivery. Complicating this reading is the notion that it could also be a joke; the show’s title is derived from the use of the letter “F” in chatroom banter to express commiseration or mockery at another’s failure, which had morphed memetically from an oddly crass prompt in Call of Duty to “press ‘F’ to pay respects” to dead video game soldiers.

Tam is clearly fluent in the slippery registers of internet culture, with their sly imbrications of irony, hyperbole, and half-truths. Likewise, his works are exercises in interpretive evasion, veering unpredictably between sincerity and jest. 78i78 (2022) is a case in point. Lying on the floor in a room near the gallery’s entryway is a bedraggled L-shaped blanket, which a gallery assistant dutifully spritzes with synthetic doe urine every day to keep it pungent and sodden. The exhibition text describes the work’s performance of “a perpetually drenched sadboi minimalism” – artificial excreta as a metaphor for dramatized emotional wallowing. The work also apparently winks at “insider signifiers of contemporary art discourse,” as doe urine is attractive to stags but displeasing to humans, just as artspeak is somewhat legible within art circles but generally repugnant. It seems the exhibition text would make viewers catch on to Tam’s cheeky insouciance, yet it’s hard to ignore a genuine undercurrent of menace given the use of fake urine as a lure in hunting. What does that say about sadboi poseurs (and their marks)?

“F” abounds with such minor defilements and eerie residua. L.O. (2021) features a grimy t-shirt hung in the curved crook of a bisected PVC pipe. Allegedly stolen from a mechanic, the readymade is particularly effective in its site-specific evocation of precarious and overlooked blue-collar labor due to the actual presence of auto body shops next to Empty Gallery, implicating the art world in the inequities of gentrification and capitalism. Tam makes compelling use of ghostliness as a conceit, emphasizing not absence per se but the (willful) failures of perception. Take Untitled (You Control Climate Change) (2022), a grainy found photograph of a façade emblazoned with the titular slogan. Shot at night, the banner is barely legible, backlit at the edges by a spectral fluorescence; one can just make out commands to “WALK,” “CYCLE,” and “GO BY BUS.” At a time when the mega-rich can take ludicrously short private jet flights while preaching on Instagram about plastic, one might reasonably assume that Untitled (You Control Climate Change) is a found meme about green gaslighting. In fact, a quick Google search reveals that it may well be an undoctored image of a 2006 environmental awareness campaign by the European Commission directed at “people who sometimes make the effort” (emphasis in original).

For its heavy thematic concerns – death, depletion, climate disaster – “F” is buoyed by a strange lightness of touch. As perplexing as it is to parse the works’ unresolved ambiguities and vacillations between earnestness and irony, “F” skirts solipsism to make canny observations about absurd, infuriating, and disturbing aspects of life in the 21st century. By turns quietly thoughtful and mordantly funny, “F” suggests that if we’re already doomed, we may as well laugh about it.

VUNKWAN TAM is an artist based in Hong Kong who works across sculpture, video, text, sound, and installation. He has participated in exhibitions and performances in Hong Kong including “Noble Rot,” Para Site (2022) and “Sound Forms. Contemporary Musiking,” Tai Kwun Contemporary (2020).

OPHELIA LAI is a writer and editor based in Hong Kong.