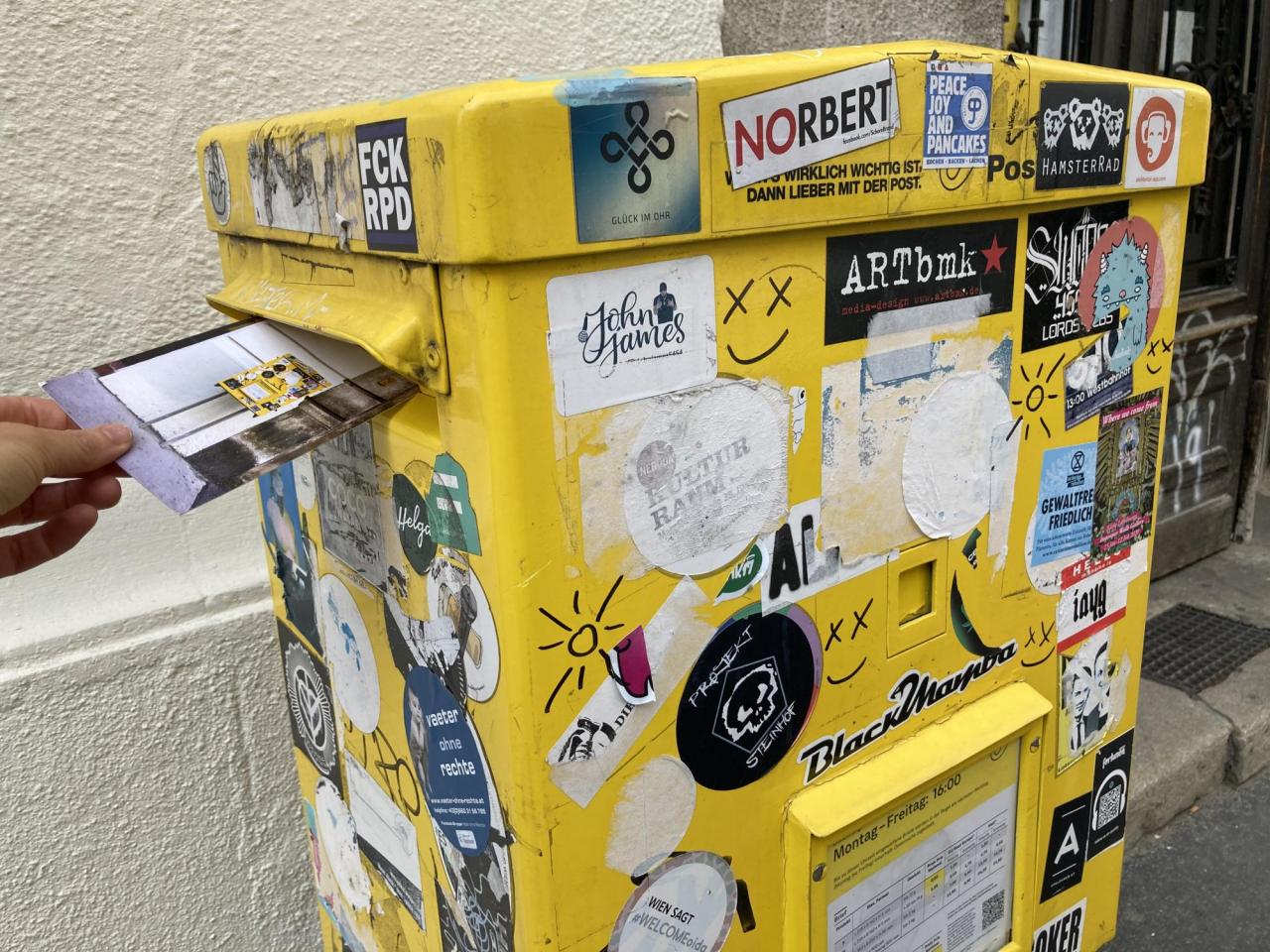 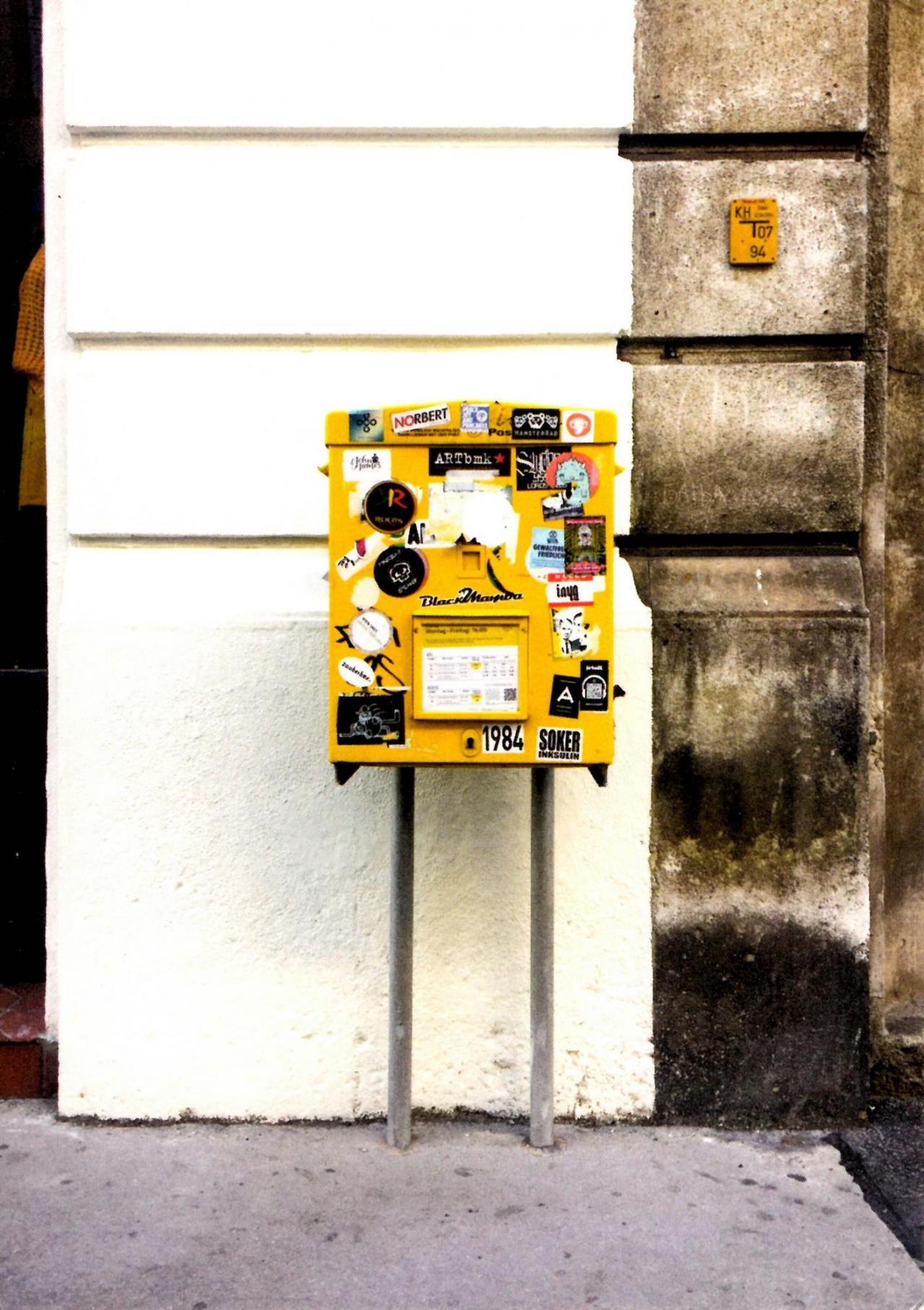 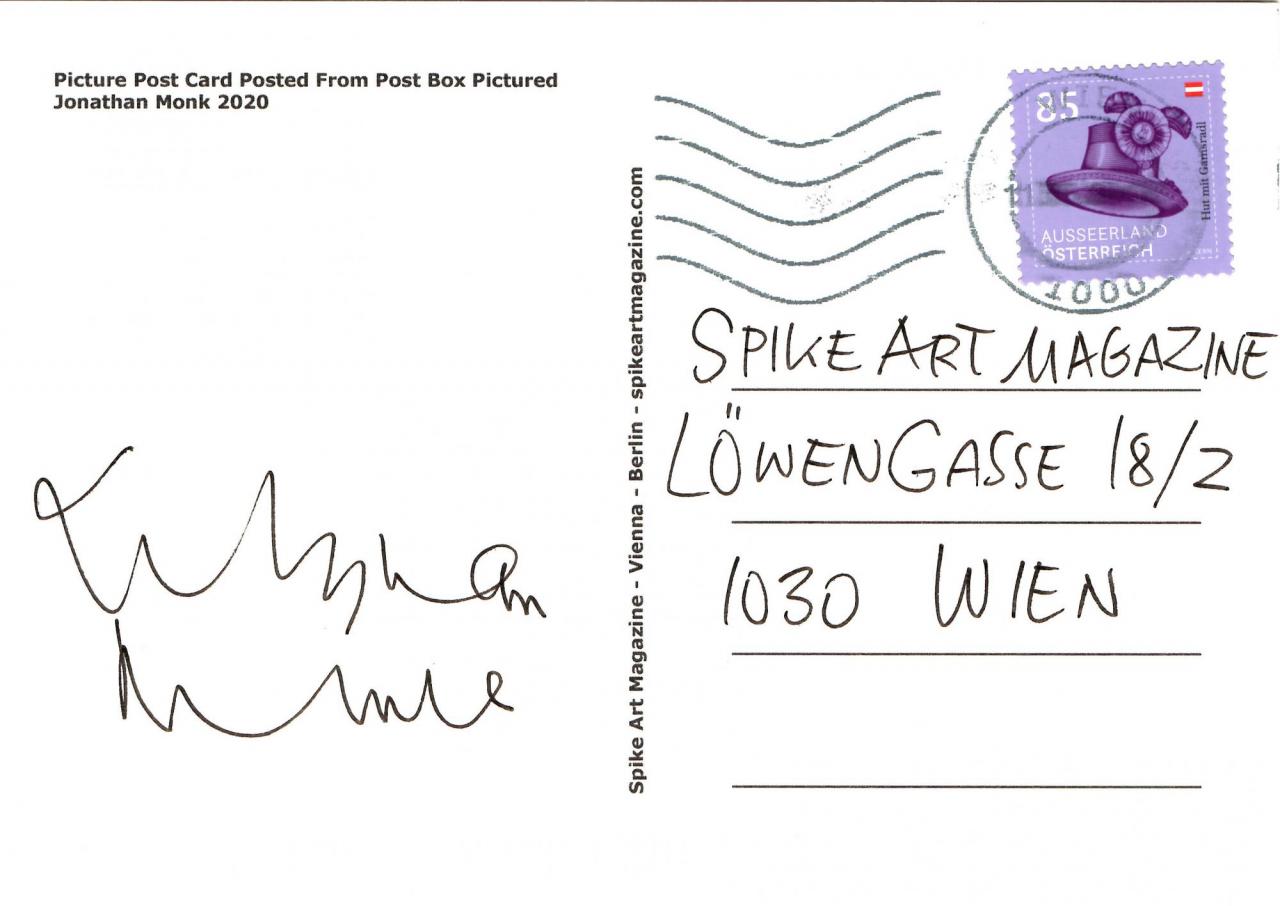 The Berlin-based artist Jonathan Monk creates works that engage with the systems of distribution, circulation, and production of art. Several of his most significant projects have managed to reflect the networks through which artworks move, acquire meaning, and involve several actors simultaneously. One such project is his edition series of postcards, where individual collectors purchase one of these works, and Monk then signs and mails the postcard in the exact postbox pictured on the front of the postcard edition. Monk’s edition for Spike belongs to this postcard project, and features a picture of a postbox in Vienna’s Margareten district. While the edition is ultimately a signed work by Monk that each collector receives, the idea behind the project – sending and receiving something through the mail – is every bit a part of the art.

Colin Lang: How did you first come up with the idea of doing a postcard edition?

Jonathan Monk: I was interested in involving myself with ephemera or postal works that were done by artists in the 1960s and 70s. The idea was to be able to do something really cheaply, but had more to it than just a simple postcard. I like this idea of posting something to someone and them receiving it. I did something similar in The Distance Between Me and You, 2001/2002), a series of Super-8 films where I fixed a camera to the front of my bike – I lived three minutes away from the nearest post office – then I would cycle this journey, filming the way, over the course of a year every time I had to go to the post office. Once I got to the post office, I would send off the undeveloped film to Kodak in Stuttgart, and then Kodak would send the developed reels directly to a collector who had purchased the piece. It documented the entire process in a roundabout way.

The first postcard happened in 2003. It was in Berlin, and it is literally a postbox around the corner from my house. I did the edition for Revolver. I came up with the title of the Picture Post Card Posted From Postbox Pictured without really knowing that it would become a series. It started with Berlin, and then other people got interested in publishing a card. I liked the idea that I could arrange to have an edition produced in New York, but then the card was actually sent from a postbox in Hong Kong. Spike is based in Vienna, but you’re also based here in Berlin, and I’m here. I have all the postcards in my studio, so when someone orders one, I write their name and address and sign them and send the cards in an envelope to the contact in Vienna (or whichever city), who then posts them. It was a way of creating this weird loop.

CL: How do you get the pictures of the individual postboxes that appear on the postcards?

JM: They are generally done by the people who want to publish an edition. Some of them were linked to exhibitions. One I did in San Francisco as part of a project at Wattis Art Institute (2005), and the one in New York with White Columns. Some editions are commissioned through a museum tied to their shop; there’s one in London at the ICA (2005), and one in Melbourne through the Australian Centre for Contemporary Art (2011).

CL: Is this connected to your Little & Large Editions, or is that a separate project that you’re doing?

JM: Little & Large Editions is a sort of publishing house and a completely separate thing. Douglas Gordon and I founded it in 2009. We invite artists to make editions. But we don’t have a post card edition yet in our programme.

CL: What’s the last postcard of this series before the Spike edition?

JM: The last one before the Vienna post card was from another Specific Objects project, this time in the village Kirby Muxloe in England, near Leicester, where I was born. My mother sends them. So, she’s also part of the project now. There  was another from a small town in Northern Italy, Selva del Montello, with someone who approached me and wanted an edition to be published by Paul + Wendy Projects in Toronto. They also published other post cards of mine, one with a postbox from Winnipeg, and another one from Reykjavik.

JM: Sure, but my cards are about the process of sending itself. Initially, my excitement was the exhibition invitation card that was more than just an invitation card. In a way, the invitation postcard is basically just a postcard, though it is somehow also more than that. I was always interested in things that become slightly more important than they visually appear to be. Well, I sign it, but most people sign postcards or at least write their name on them, so there’s nothing really different from a regular card, just that it has this extra little twist. I like the postcard as a format as well. When people go on holiday, the postcard has sort of vanished. People just send an SMS now.

CL: Who took the picture of the postbox in Vienna?

JM: Julia Hölz, my assistant, who has been living in Vienna for the last three years.

CL: Has one particular collector or person received multiple cards from different places?

JM: There are people that have almost all of them. They started from the beginning and have been following the project ever since. Major collectors, as well as people who mainly collect ephemeral works, have been doing this. It’s one of these projects that I do just because I like doing it. It’s just about the idea of having someone who is interested in doing this particular project with me.

Have a look at his new Artist Edition for Spike.