"This is without judgement" 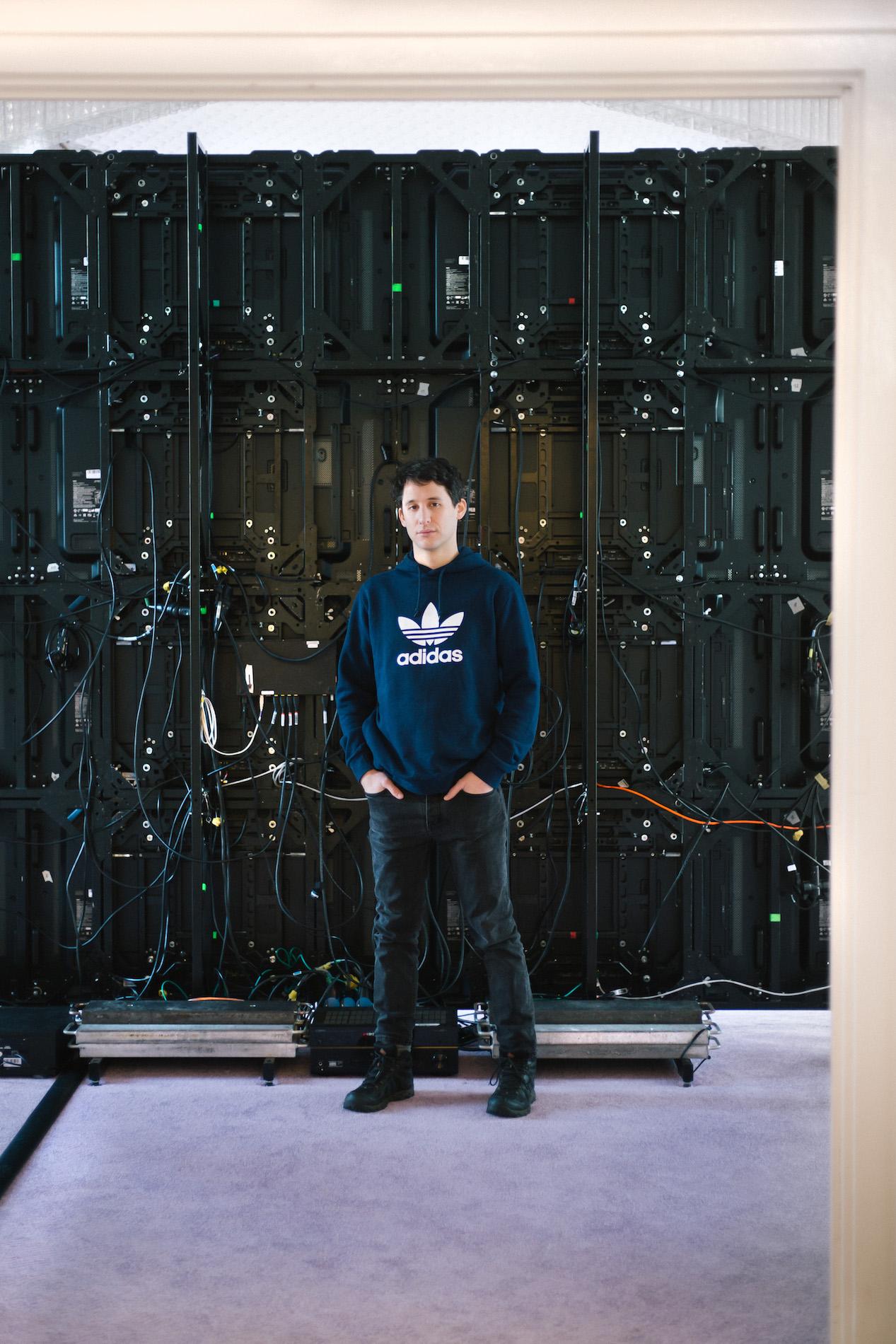 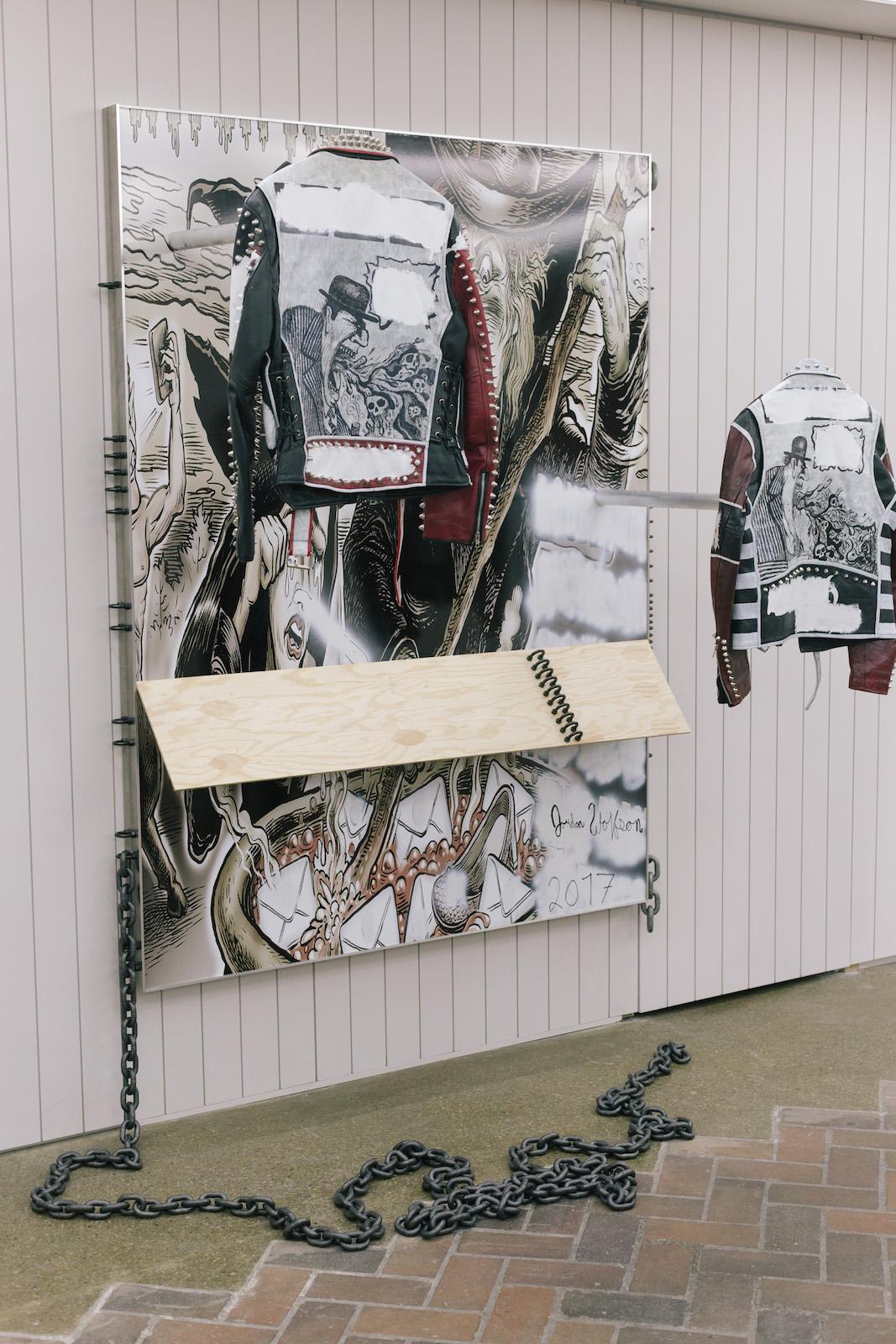 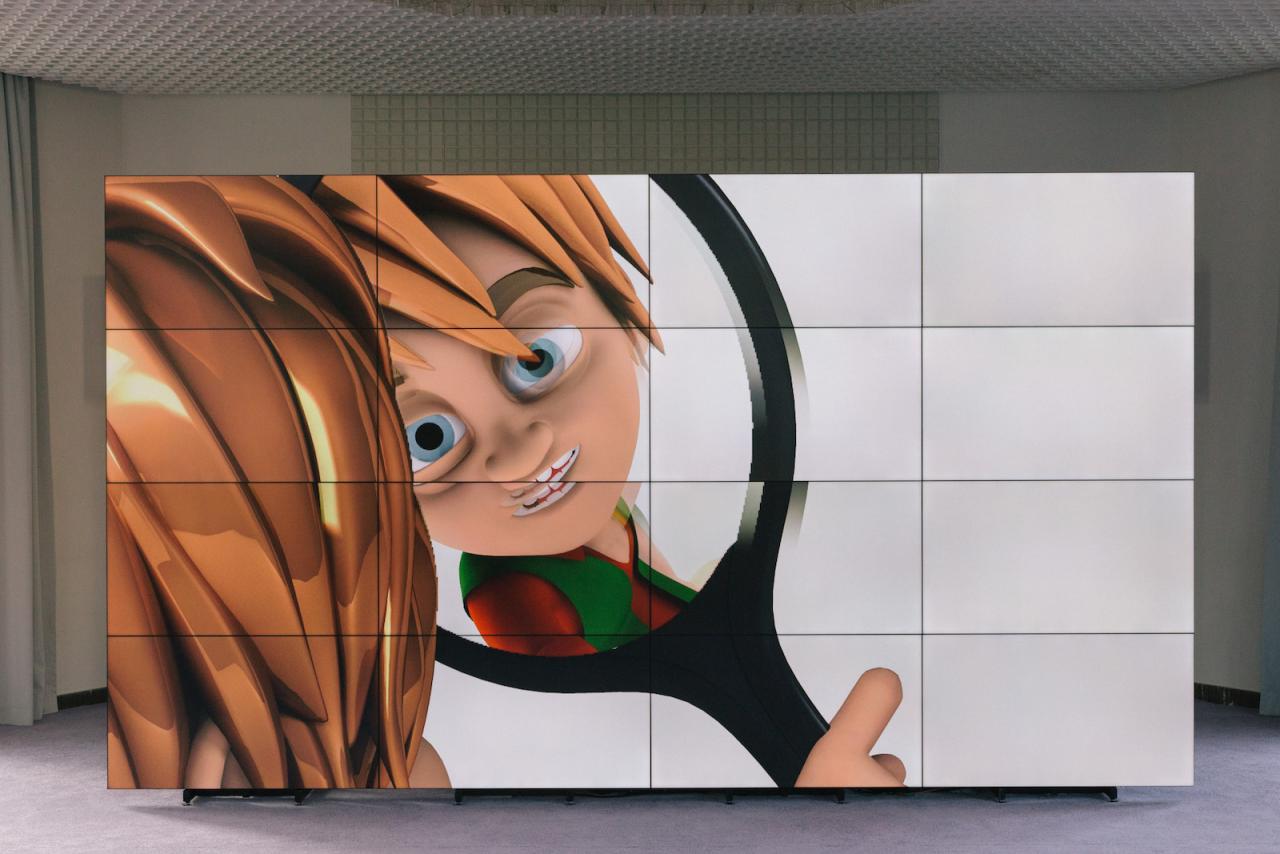 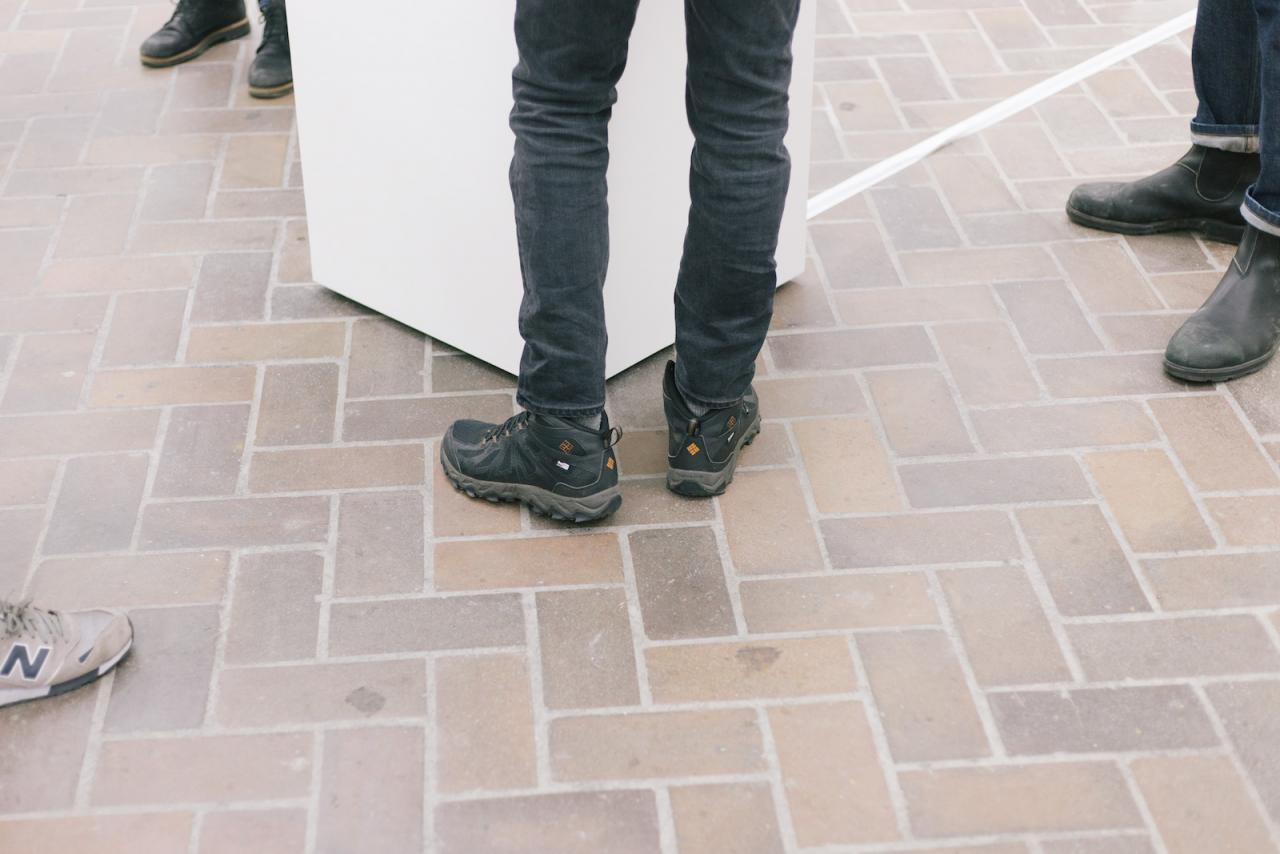 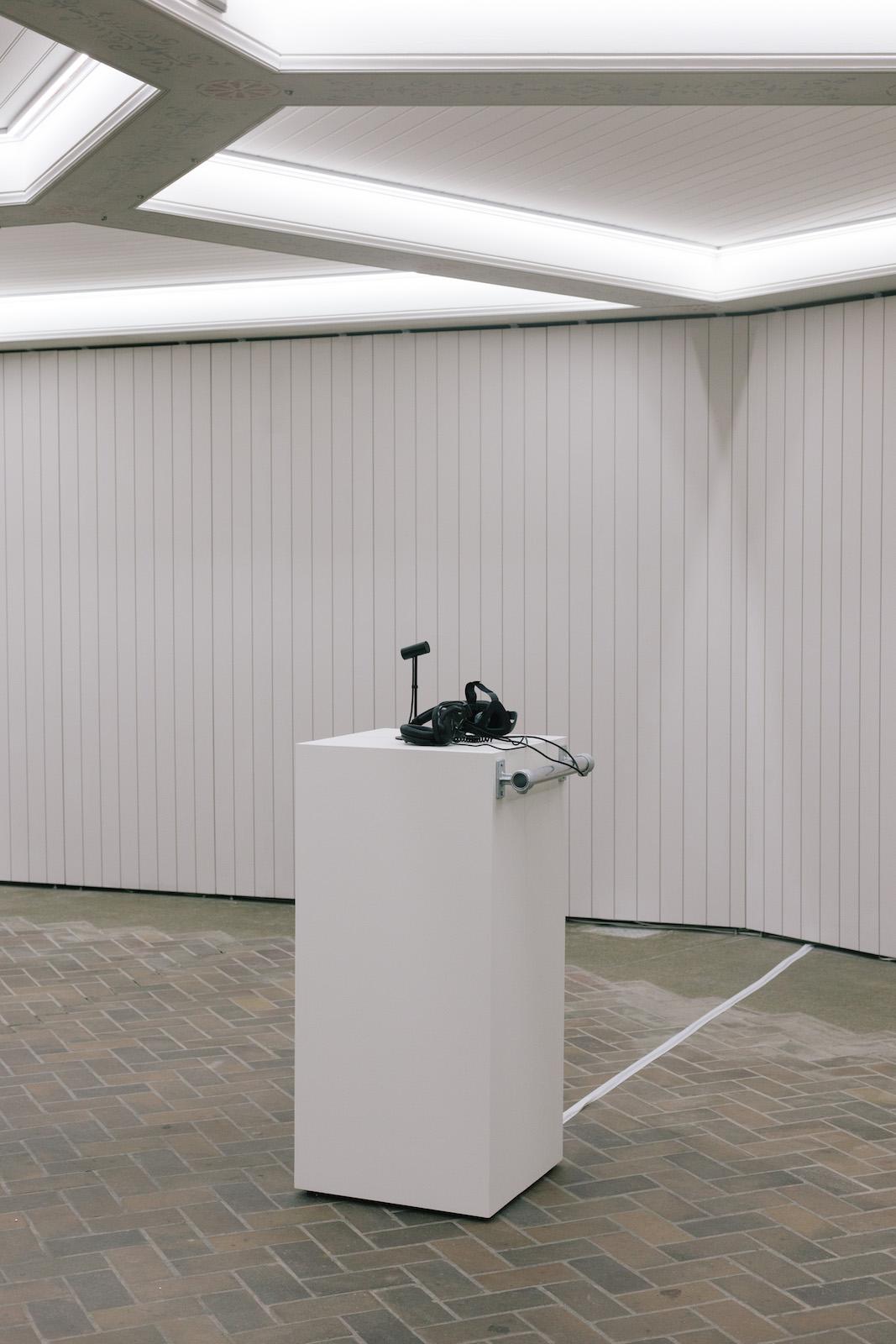 Jordan Wolfson and I meet at Schinkel Pavillon the afternoon before the opening of his show, say a quick “hey” and “hi”. He picks nuts out of an ugly office cup, wearing a hoodie and climbing shoes. He excuses himself for having a hard time with articulation that day while explaining what there is to see: Riverboat Song (2017), the third video in a series of three (after Animation, masks, 2011, and Raspberry Poser, 2012); Real Violence (2017), a rather famous VR work that shows a digital Jordan beating a guy to death (pretty sure) with a baseball bat; and an untitled sculpture/painting (2017) (he’s not sure).

We first go down to the basement, where the latter two works are installed. I want to see Real Violence first, I say, but it’s not yet turned on. We move to that sculptural painting: The image comes from a satirical cartoon made for Trump supporters. It shows Hillary Clinton, Huma Abedin, and Anthony Weiner stewing emails. Wolfson appropriated it, took the language off, added his signature and painted long noses on the figures.

I ask why he did that and Wolfson replies by clarifying he's not a Trump supporter: "it was intuitive". One thing that's important to him as an artist, he emphasizes, is to be able to look at the world in an uncensored way, to let the world pass through him. It triggers a reaction and the work we see is this: "This work is my shape – how the world passes through me and distorts," he says.

The first thing you read about Jordan Wolfson is the first thing he says to me here: there’s no moral judgement in the works. There’s an obvious response to that, I give it: Wouldn't he say that by appropriating, reshaping and painting over images there is something he's giving to it, and by adding to it one can’t not judge the material?

Wolfson doesn’t deny that if he had an opinion or position on the material, even unconsciously, that it would come through, "but I don't intend for these artworks to be didactic images of my beliefs, what I think is right or wrong".

The VR glasses are now turned on and working and I am the first to watch Real Violence, while everyone is watching me. Jordan tries to pull the goggles over my head, they don’t fit, he whips them off, changes the size, they still don’t fit. He cracks a joke about writers with big heads, changes the size, they kind of fit. He asks if it’s focused, “no, it’s not”, turns the wheel to focus, still “no”, pulls everything off again, shows me where to focus. I put it on again, try to focus, it stays blurry, “is it focused?” “Yes,” I lie.

“It put me in a bad mood”, I hear myself saying just after, which seems to please the artist. But the reason for my mood is rather disappointment; this was no more shocking than playing GTA as a teen – which wasn’t.

I ask about the red-haired figure in the video and Wolfson replies that what he likes about American trickster figures like Huckleberry Finn is that they reveal truths, but that "they go about it in indirect ways that get them in trouble." From there he again draws a line to his own approach of letting things pass through him to take shape. There's an absence of any intellectual or critical process, no message, he says: "I'm not here to save anyone." All he's doing is trying to please himself as an artist. But the word "pleasing" becomes tricky when "things aren't positive". And that's when one has to say "this is without judgement". It is not about positive or negative, just about pleasing and expressing oneself without judgement.

Closing the tour, Wolfson announces that in the future, the medium for this very expression will only be sculpture. Because in contrast to video, which might be a "new" medium but not at all a cutting-edge one, sculpture allows him to actually make "something that exists as an object in the present”.

"Something that exists as an object in the present.” If this is a desire, I think, then the single comprehensible reason for it is to be a distinct part of this present. It means trying to add something to it that is more than simply more. A meta artistic expression has no purpose if it’s indiscernible from the material it reflects. Then, if we assume that Jordan Wolfson’s work qualifies as being a distinct part of our present, what does that say about it? I fail to judge myself.