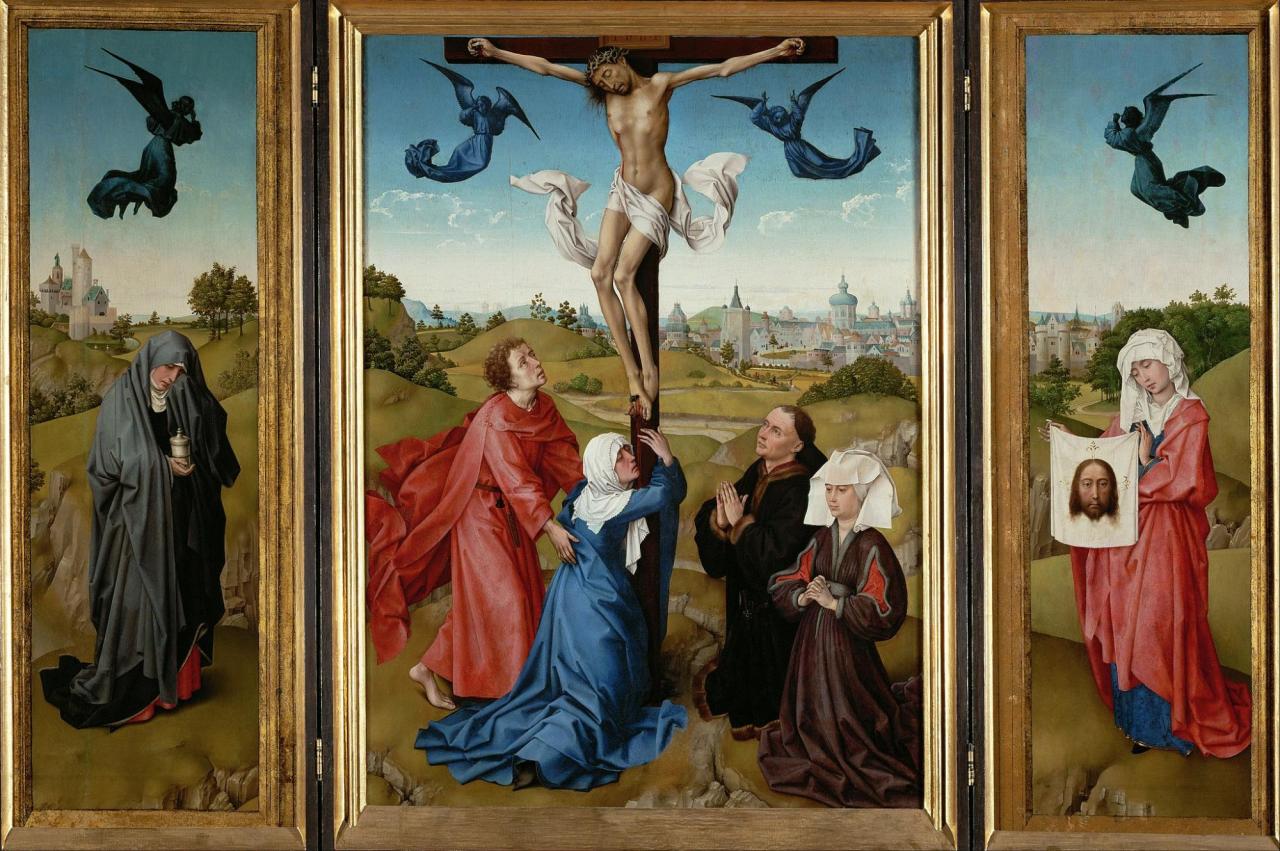 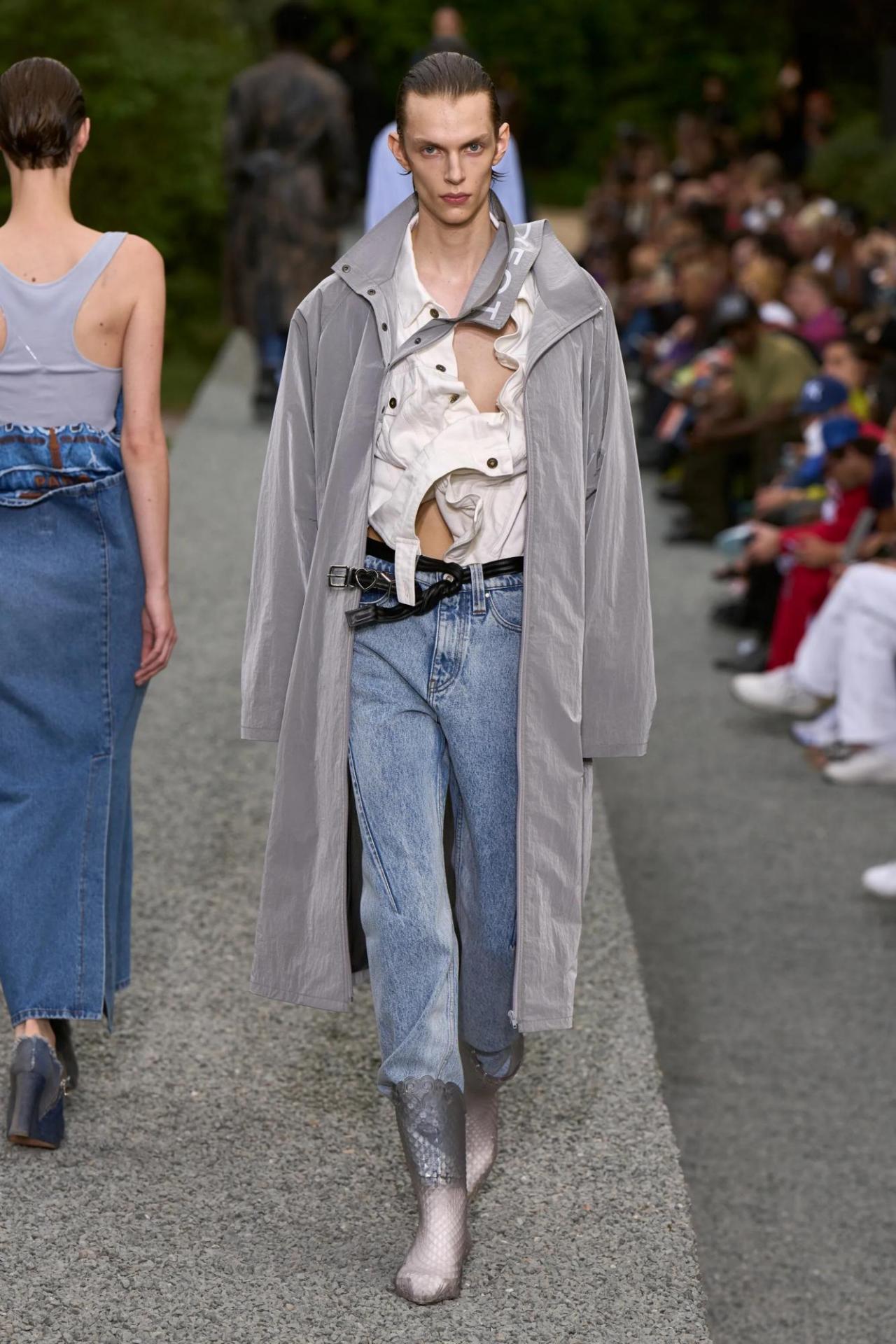 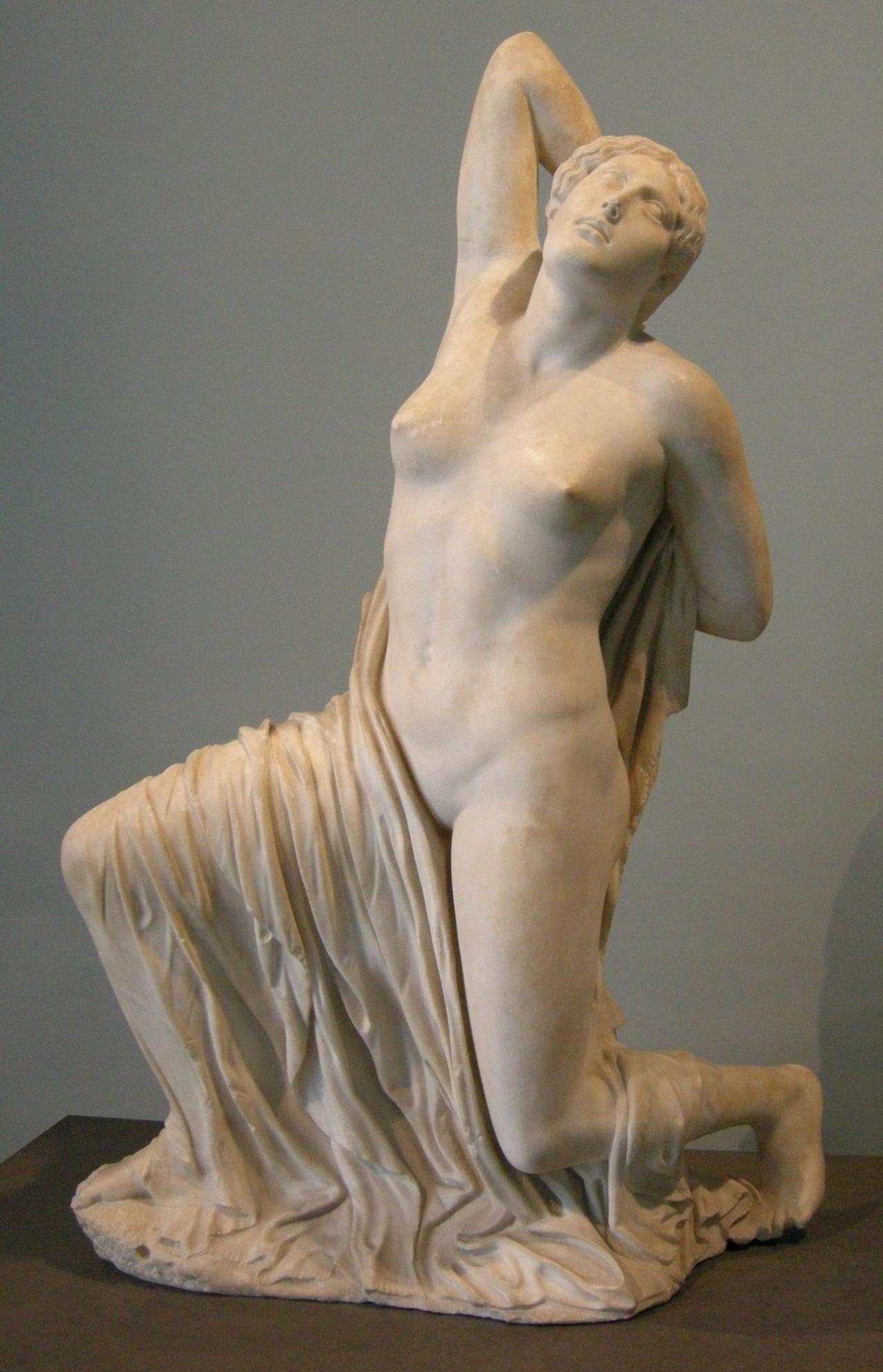 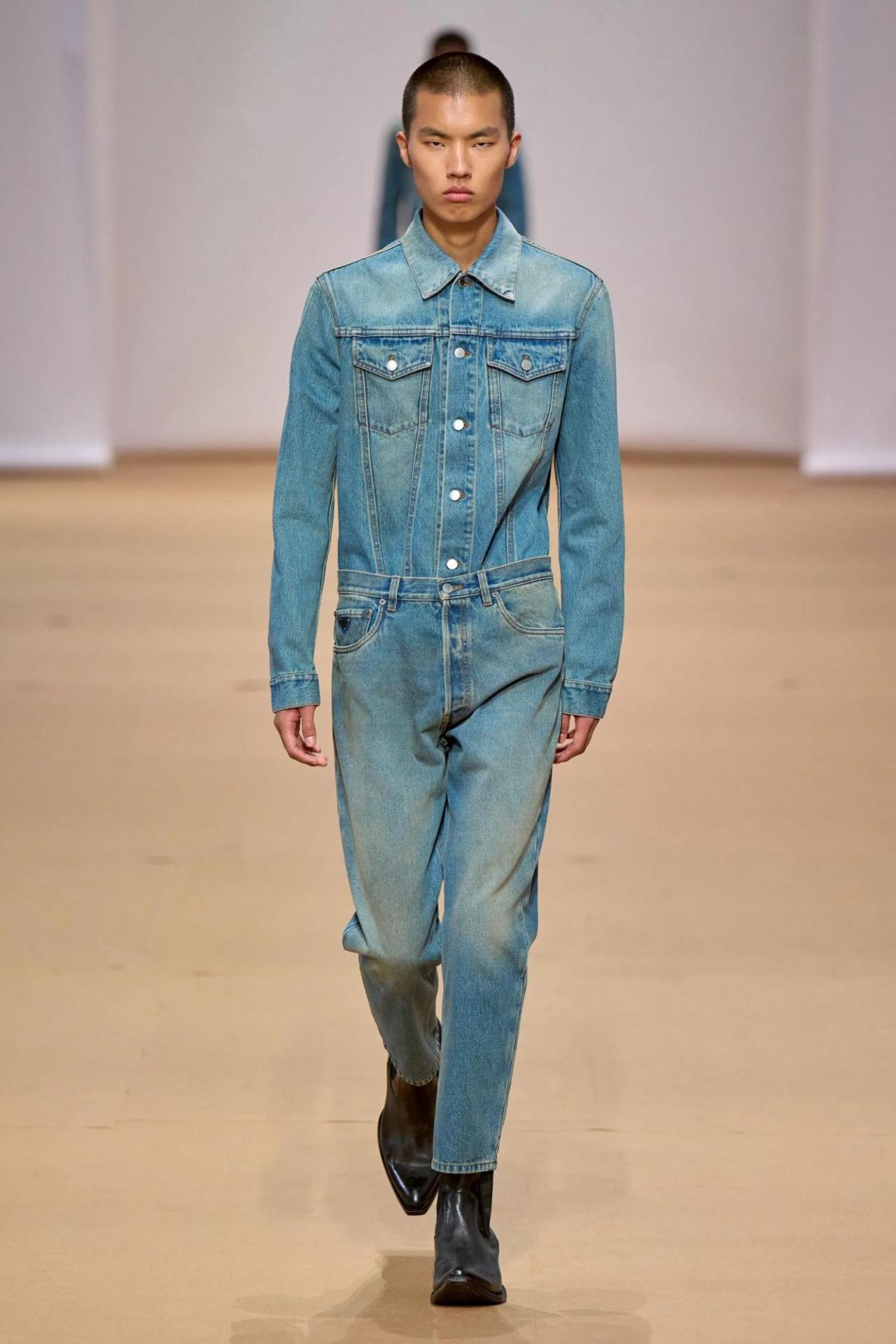 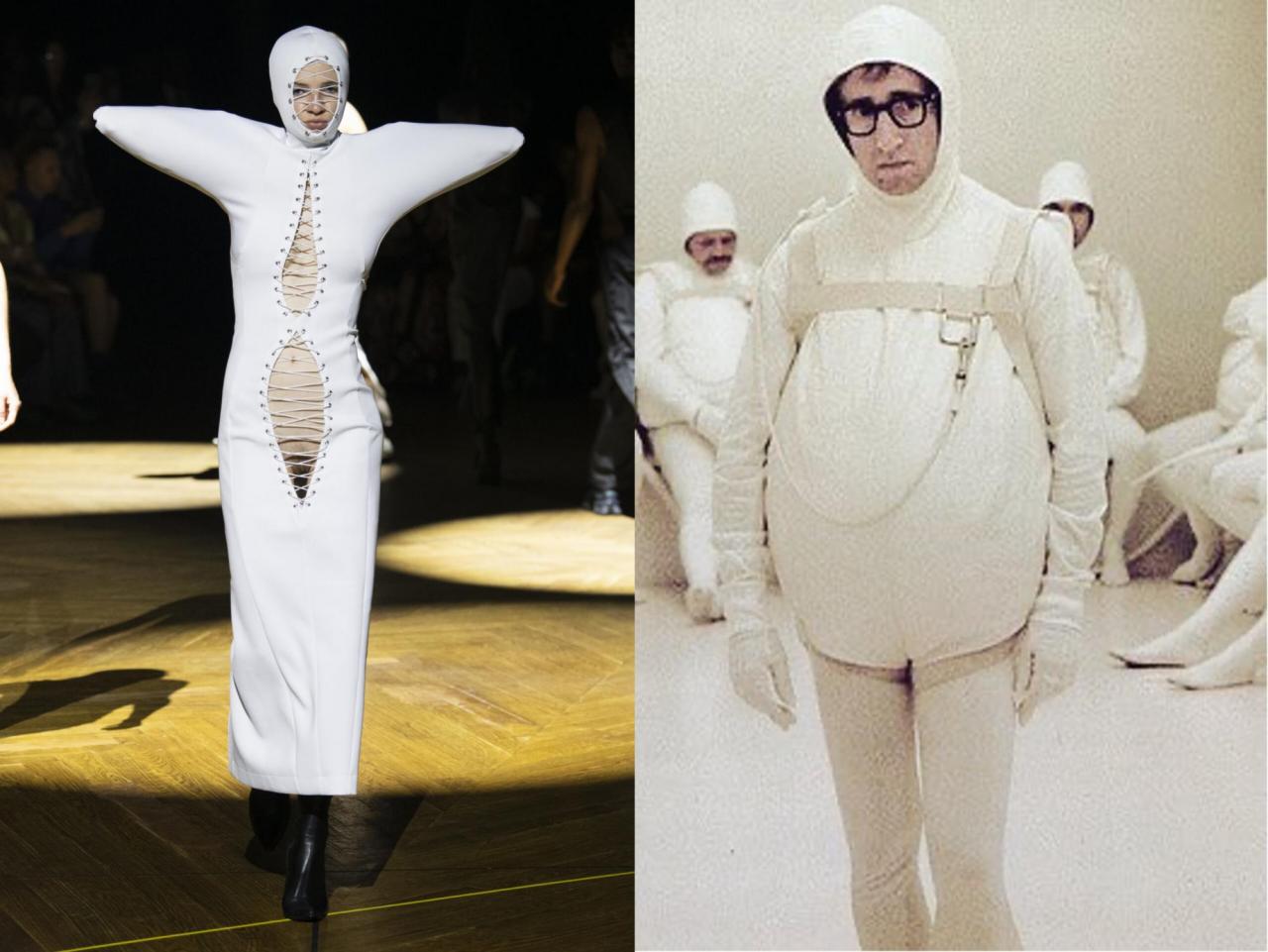 Jesus’s loincloth writhes. Usually, when crucified, Christ wears a quiet, easygoing little number. But in medieval crucifixion paintings, the King’s sarong convulses in an antigravitational mania. The garment is agitated not by force of wind (the erratic torques defy any plausible breeze) but by the internal chaos and perverse logic of cloth itself.

A lot of fabric on the runways these past couple weeks has been acting up. Bianca Saunders’s tugged shirts, J.W. Anderson’s wrinkled denim, Jacquemus’s knotted jacket,  Martine Rose’s mis-zipped flys, Y/Project’s signature garbling. Bunchy and bratty, the mangled garments seem to protest themselves, cringing at the very notion of construction. This Fashion Week’s flavor of structural defiance is more reluctant than radical, more apathetic than alt, more anti- than Christ. The fabric crosses its arms. Scrunched blazers begrudgingly accommodate closure, as if wincing at their own existence, dragged here against their will. Still, fashion must giveth its life to the sheep.

“Trends are dead,” people say.... but maybe dead is the trend. Loewe’s Spring 2023 collection is covered in grass as if already six feet under. Demna is doing that annihilation thing. Even sweet, bucolic Chloé has gone dark — its Resort 2023 collection, inspired by Macbeth, is full of looks for flirty mourners. As per Chloe Cherry et al, it’s hot, facially, to act lifeless. We strive for nullity, says theorist Sylvère Lotringer, in “the endless recycling of art’s own demise, deconstruction, and self-reference” (“The Piracy of Art,” 2005). So, J.W. Anderson consecrates an industrial glove, tacking the accessory to a sweater vest. Ditto canned food. The post-Warhol artworld, Lotringer continues is “a bachelor machine with nothing more to grind except itself.” Mowalola’s crotchless maxi dress swallows itself, trapping the model’s arms in the collection’s Christian motif. Glenn Martens’s white denim jacket appears to have been sent through a garbage disposal. Marc Jacobs’s Fall 2022 collection asks: “What if jackets were skirts?” And R13’s Resort 2023: “What if backpacks were pants?” Lotringer, again: “[Art is] now floating in some kind of vapid, all-consuming euphoria traversed by painful spurts of lucidity […] hardly alive, but still thriving.”

Vox blames our “garbage-filled hellscape” for killing trends. Harper’s Bazaar wonders if the culprit is communal mental instability. Really, it’s both. Which is why it’s neither. Culture is too atomized for any new aesthetic twist to hold much stake, there is no sanctity in the church of TikTok, but, whether psychotically flapping in a million directions, or neatly wrapped up for a mainstream congregation, we still kneel to watch fashion claim its iron grip on thin air. Even when falling off, its urgent meaninglessness offers a divine skirting of problematic underlying realities — a coverup for the fact that Jesus is actually circumcised.

The point of fashion has never been to harness a categorically smooth grace but, maybe, to relinquish agony through the flourish of fabric. Talking about the voluminous drapery of early civilizations, art historian Anne Hollander says: “the extreme poetic possibilities of cloth” cloak the misery of “the essentially wretched and silly human form.” (Seeing Through Clothes, 1993).

I tell myself it’s not so-called camel toe. Anyway, we’re too close for me to tug at my crotch. Call it piquant naturalism; the thrust of flesh corrupting the spell of the track shorts. I am trying to flirt with a poetry professor. Accepting my shorts as they are, I hike up the snood The RealReal sold me under the pretense of being a tube top, and, coquettish, I say I don’t really believe in poetry. Poems are too form-forward, too desperate, poems are obsessed with being poems, the first thing I think when I see a poem is that I’m about to read a poem, etc. The professor, wearing 7” Dri-FIT shorts and a brown hoodie, says poetry, while maybe self-conscious and overwrought, embodies the straining after, partial attainment, and inevitable failure of transcendence. My snood is slipping. I start to nod but stop. In “Make Him Worry About Losing You,” Antia Boyd of the Magnetize Your Man podcast says nodding is a maladaptive people-pleasing tic and women must unequivocally nod less. After helping thousands of women, Antia Boyd has seen-to-believe that nodding makes men feel safe (bad) and that keeping the head as still as possible can help women stay in tune with their bodies (good).  Head bowed, I use the phrase “the poetic project” in a sentence. The poetry professor says “all art” and “the struggle against reification.” I  accidentally nod because I don’t really know what reification means. Backpedaling, I try to ironize the moment by repeating a phrase I saw calligraphed on a linen pencil pouch (“prose walks, poetry dances”). The professor nods. I feel unsafe.

Walking alongside this season’s convulsive couture is a handful of more prosaic collections. The leisured self-assurance of an Olsen jute dress with a convertible train that can be neatly tucked away (lest it flail) is cool enough to be a little boring. Brands like Max Mara, The Row, and maybe even, in a way, Prada (Vogue’s Luke Leitch describes the Spring 2023 collection as “kinky normcore”) are something more akin to a Platonic ideal of clothing. These may be straightforward, classic cuts, but they are not menopausal (to quote the Duchess of Cornwall regarding the problem with the color mauve). A lick of gingham where you least expect it. A leg of fishnet under a camel coat. Ever fecund, and yet both styles — convulsive and Platonic — are dead too. The warped silhouettes and twisted seams of the former roll their eyes back while the elementary staples of the latter give a blank dissociative stare.

In “Letters on the Aesthetic Education of Man” (1794), Friedrich Schiller proposes two types of beauty: energizing and melting. The first seizes, the second relaxes. Both have downfalls. The first leads to hyperactivity, the second, to depletion. But the right combination of the two produces a state of simultaneous arousal and tranquility that brings you to the highest version of yourself. It fills you up with nothingness. It’s like being form-forward and wholly ghosted. It’s the reification of being born again.

CARA SCHACTER is a writer living in New York. In the future, her new column “Worn Out” will run the last Wednesday of every month. Last fashion week, she wrote about clinical horniness.