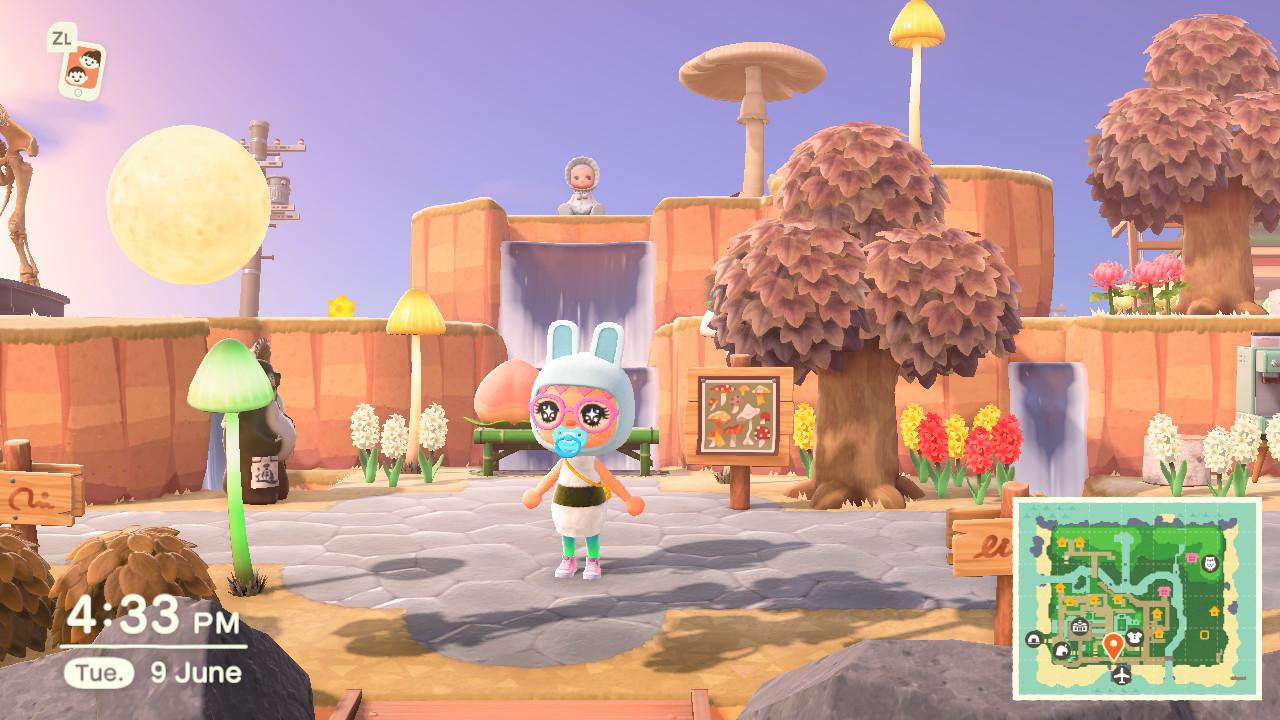 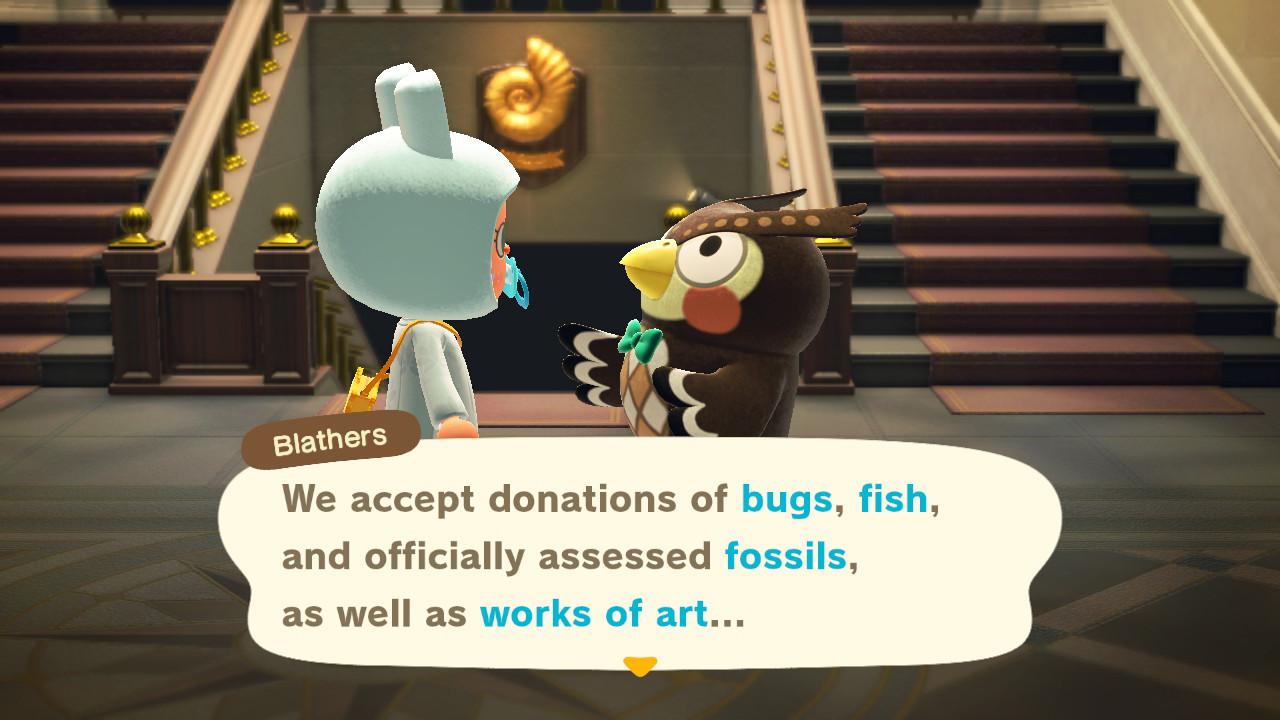 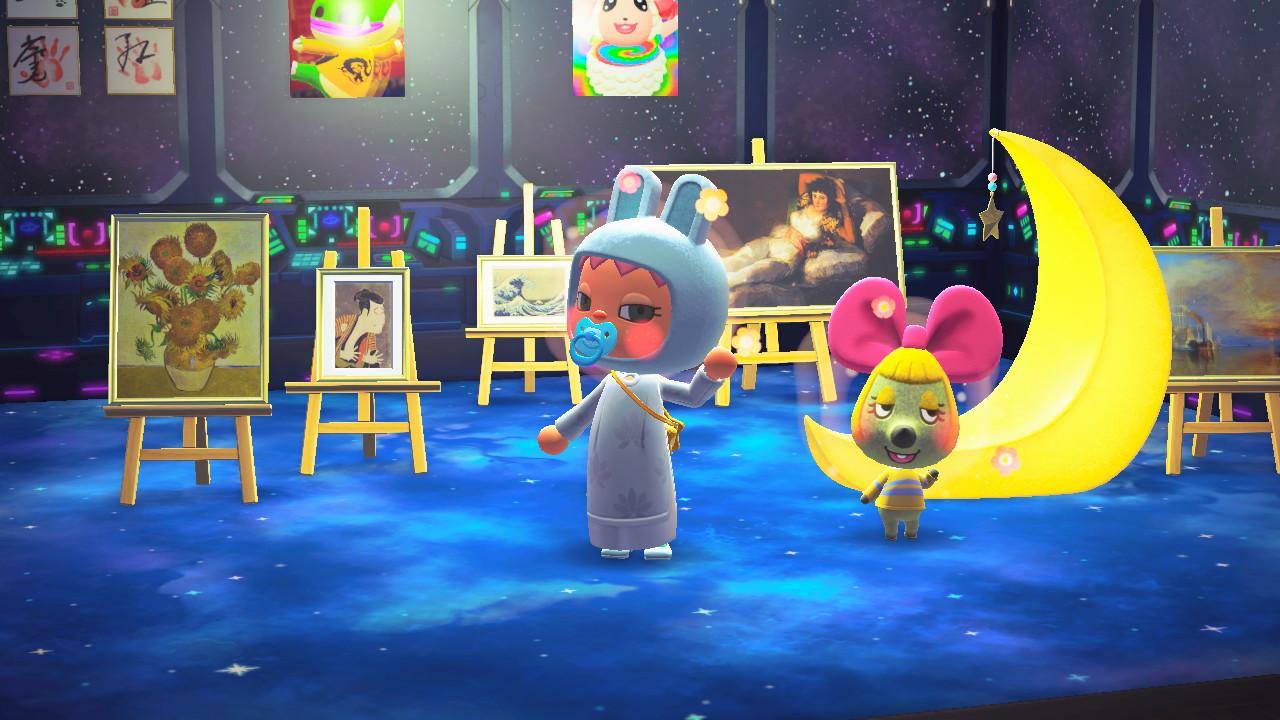 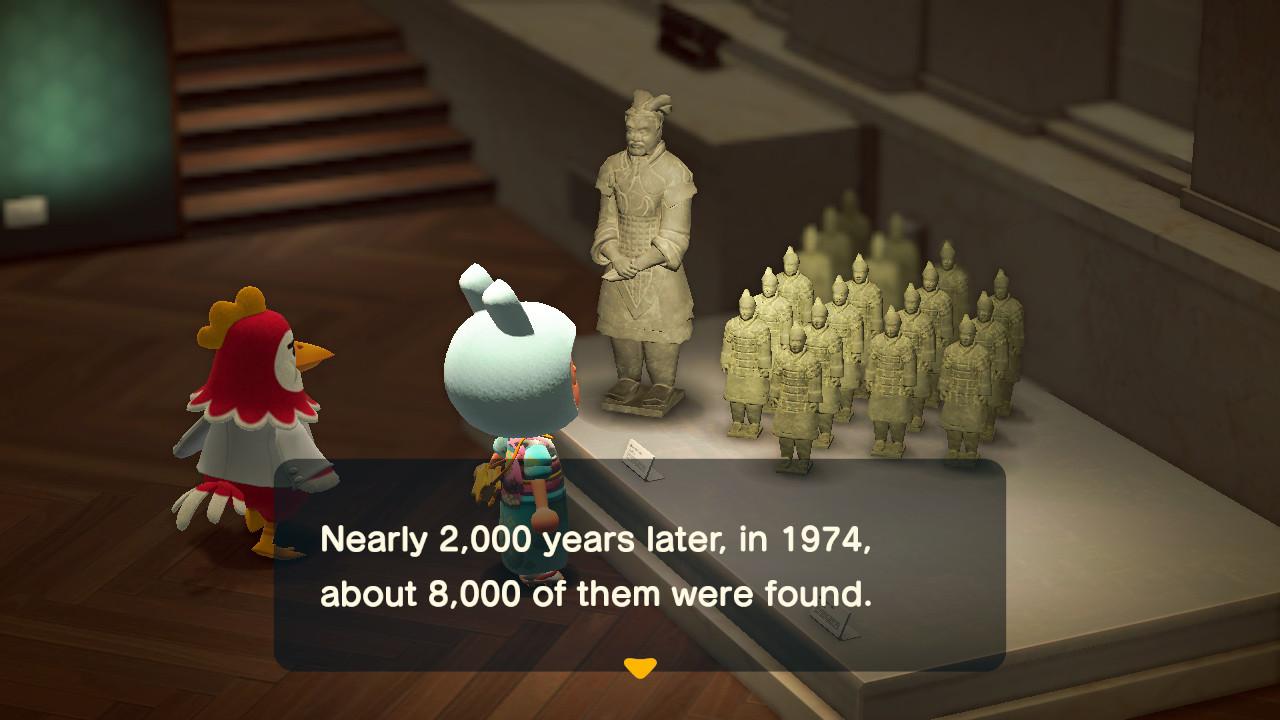 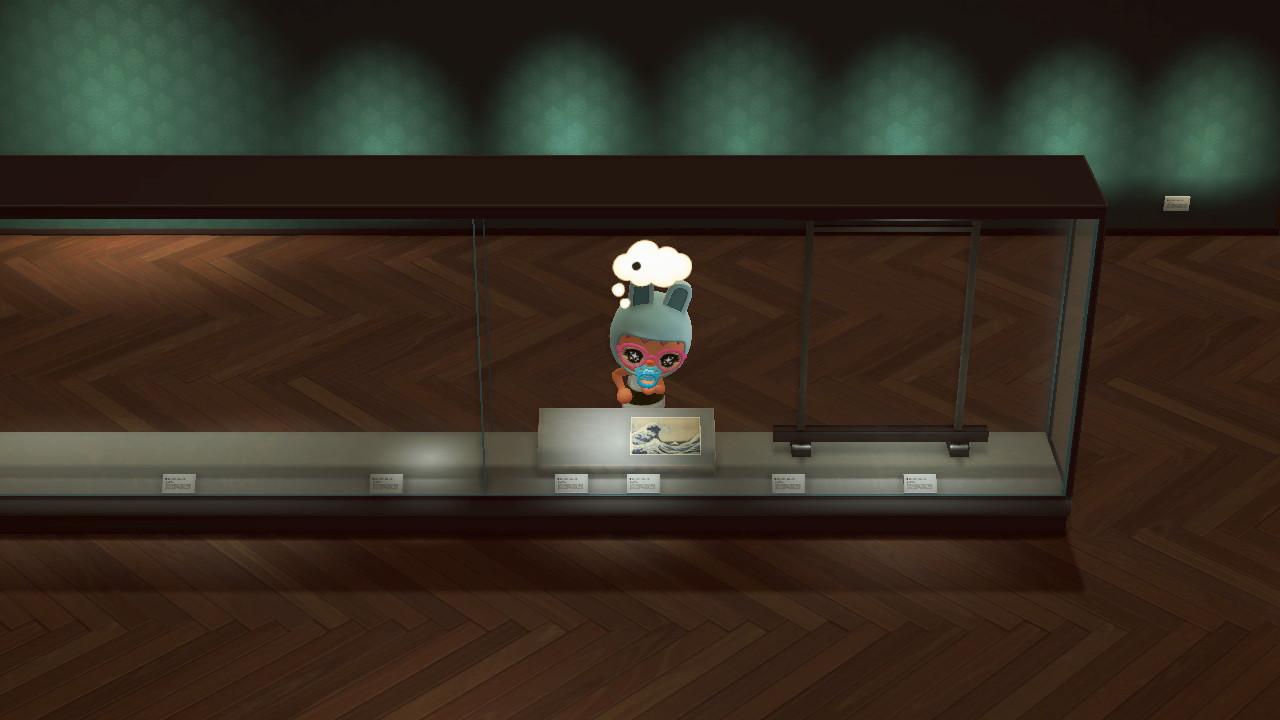 When human life itself is in a state of emergency in this science-fiction global pandemic reality, art again seems to serve its role as secondary luxury, works hiding passively in the empty museums and galleries of the world, waiting for their visitors to show up in person. In the parallel dimension of Animal Cross- ing: New Horizons, the default expan- sion of creating an art gallery as part of the island museum that is a stable fea- ture of the game is a novelty, to say the least. But, especially since the timing of the global release of the game’s latest iteration magically coincided with the onset of Covid-19, could this new attraction itself be a kind of fable-telling mechanism (à la Donna Haraway), where new forms of digital embodiment compensate for the material absence of the global art network?

The update patch that allows users to import collections from major museums (released on 23 April), had the effect of making the fictional museum of the game over into a virtual reality of “real” museums. Each Animal Crossing user is equipped with a deserted island that they must explore and build into a habitable community, filled with animals and other signs of life – like art! One of the game’s shady but adorable characters, Redd (aka Jolly Redd), is an art dealer who attempts to peddle stolen goods to users. Along with his boat, the Treasure Trawler, Redd visits each player’s island randomly at her secluded beach location, and has a trove of various paintings and sculptures on offer. The scheme, and challenge that Redd presents, is that a player must be able to judge – either from online cheat charts created by the gamer community, or from her three hundred pages of an art-history text book – a given work’s authenticity. With the art gallery expansion and Redd’s arrival comes the risk that players choose a forgery, which is summarily refused by the character Blather: a museum director with starry, googly eyes.

On a desert island, real or virtual, one cannot help but ask the question that every reader of Robinson Crusoe inevitably poses themselves: Given the chance to bring three things with you to an abandoned isle, what would you choose? Popcorn, a survival kit, a magic wand for granting extra wishes? In school, many of my classmates and I would exchange answers, and funnily enough, I don’t ever remember anyone mentioning art in their list. Having a museum that harbours living organisms – oarfish, a peacock butterfly, pre-historical animals like Acanthostega and Diplodocus – along with artistic artefacts (paintings and sculptures, primarily) on a desert island as the default setting in Animal Crossing suggests a rather radical notion of art’s place in the context of survival. For on this island, art shares a similar importance to the oranges, apples, peaches, and cherries periodically dropping from the trees, which serve as the energy source for each player to be able to properly settle in the game. Art, then, is also suste- nance, generating aesthetic pleasure while the player carefully curates the island experience.

Default yet optional, the energy squeezed out of the fruits is not the ultimate determinant of whether one lives or dies. The functionality of ruit-consumption is subject to specific actions that each player chooses to perform. And the same goes for art. Stripped of any ideological function or cultural reference, artworks in Animal Crossing are evaluated according to perfectly exchangeable attributes: individual pieces are labelled simply, “_Adjective X_painting” or “ _Adjective Y_ statue”. It’s a rather cynical if realistic comment on art’s function, for a Nintendo game with cute little animals. For example, Leonardo’s Mona Lisa appears as “Famous Painting”, and the Bust of Nefertiti as “Mystic Statue”. As the human indicators – the subject of the artwork, or the artwork’s creator – are withdrawn from the titles of these monuments of art history, the emphasis falls squarely on the given work’s own materiality, now understood simply as “famous”.

No matter how “famous” the “famous painting” is, the amount that one needs to pay to obtain such a thing never goes above a fixed price (4,980 bells). It is not cheap, but affordable, especially for those who make great profits from the “(turnip) stalk market”. More importantly, the player is not forced to spend 4,980 bells for any of the artworks. Left alone in the museum gallery space, one could choose to have a collection of forgeries (which from my perspective are more interesting than the real ones for their jolly configurations), or to create one’s own art gallery using a pattern-generating tool. Though limited by a certain form of presentation, the player nevertheless has the option to create her own pixelated painting or simply to download one from various online image collections such as Pinterest, the Metropolitan Museum of Art, the Getty Museum (a whacky constellation if ever there was one!), allowing players to curate according to their own artistic flings and creative whims. In this sense, Animal Crossing provides an open platform for players to multi-channel a hybrid, self-generated gallery, free from the politics of identity or institutional hierarchies. Is the “new horizon” one of freedom, escape, the eclipse of ideology? Maybe all of the above? It’s just a game, but the “horizon” in the subtitle of the latest release of the game is plural, for whatever reason.

Default and optional, the fact that art is not presented through some “old wise white man’s” anthropocentric narrative and value judgements, Animal Crossing transcends the boundaries between what Marx called “base” and “superstructure” (at least, virtually). One may argue that the paintings and sculptures in Animal Crossing appear to be great reductions as a result of the loss of some former “aura”: the inarguable stamp of authenticity of the artistic objects in their IRL existence. Yes, we cannot touch, smell, venerate, or kiss the “art” that we’ve collected, but as an unintended side effect, perhaps this is exactly what the game challenges us to consider – a much-needed reappraisal of “aura” for the hyper-digital age, when artistic objects are already seized in an infinite loop of their own reproductions. Is it “aura 2.0”? Or have we entered a “post- aura” era? Does it matter? I mean, we are prohibited from touching, smelling, and kissing the art IRL anyway.

I am not trying to tell a story about how Animal Crossing is actually a piece of sticky Gesamtkunstwerk- flavoured bubble gum that lets one vandalise the pristine surfaces of the white cube and claim that this is the future of art. Instead, what I would argue is that this this game, with its questionable anthropomorphic values, does indeed permit one, at the very least, to imagine a future co-existence with art in its very visual/virtual, tactile/portable realities. And it invites the player to collectively weave this fable of co-existence, as she is already part of the fable itself, in a speculative, child-like way.

The fable goes that one day Penelope, the peppy mouse villager on the island of ò^~^ó, eagerly told me about a dream where she encountered several delicious cakes. She was so satiated by her mere craving that she felt too full to eat. Therefore, she decided to go on a diet before diving into her dreamland, so that there she would be able to have all the delicious cakes when she met them again. “MY SOUL NEEDS CAKE!” Penelope told me at the end of the conversation before handing me a forgery of the “Wistful Painting” (aka Girl with a Pearl Earring).

Yes. Indeed. My soul needs cake. The cake is art.

Shall we eat it?