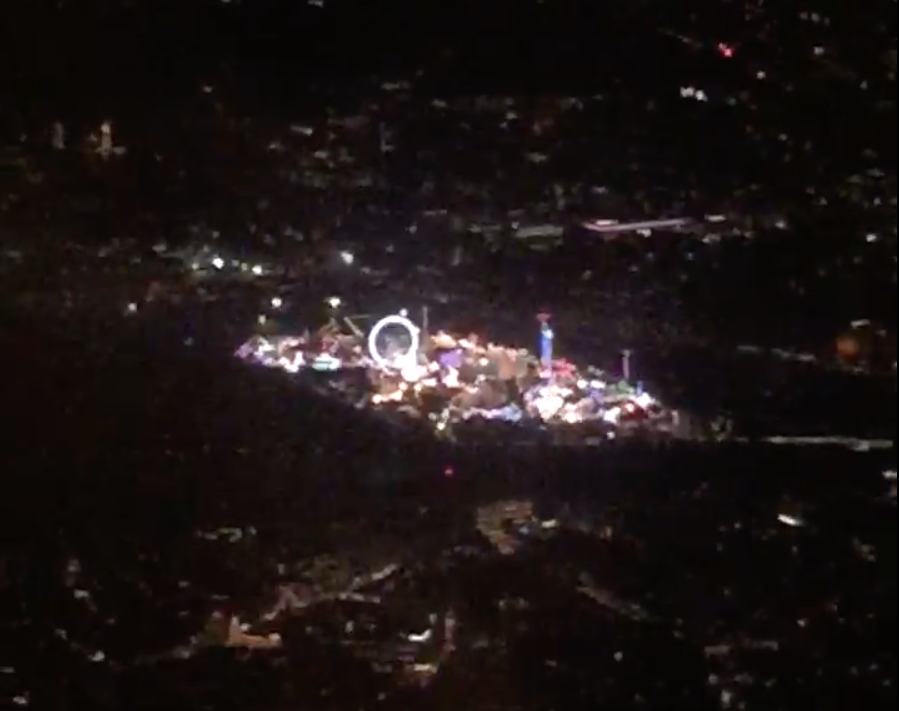 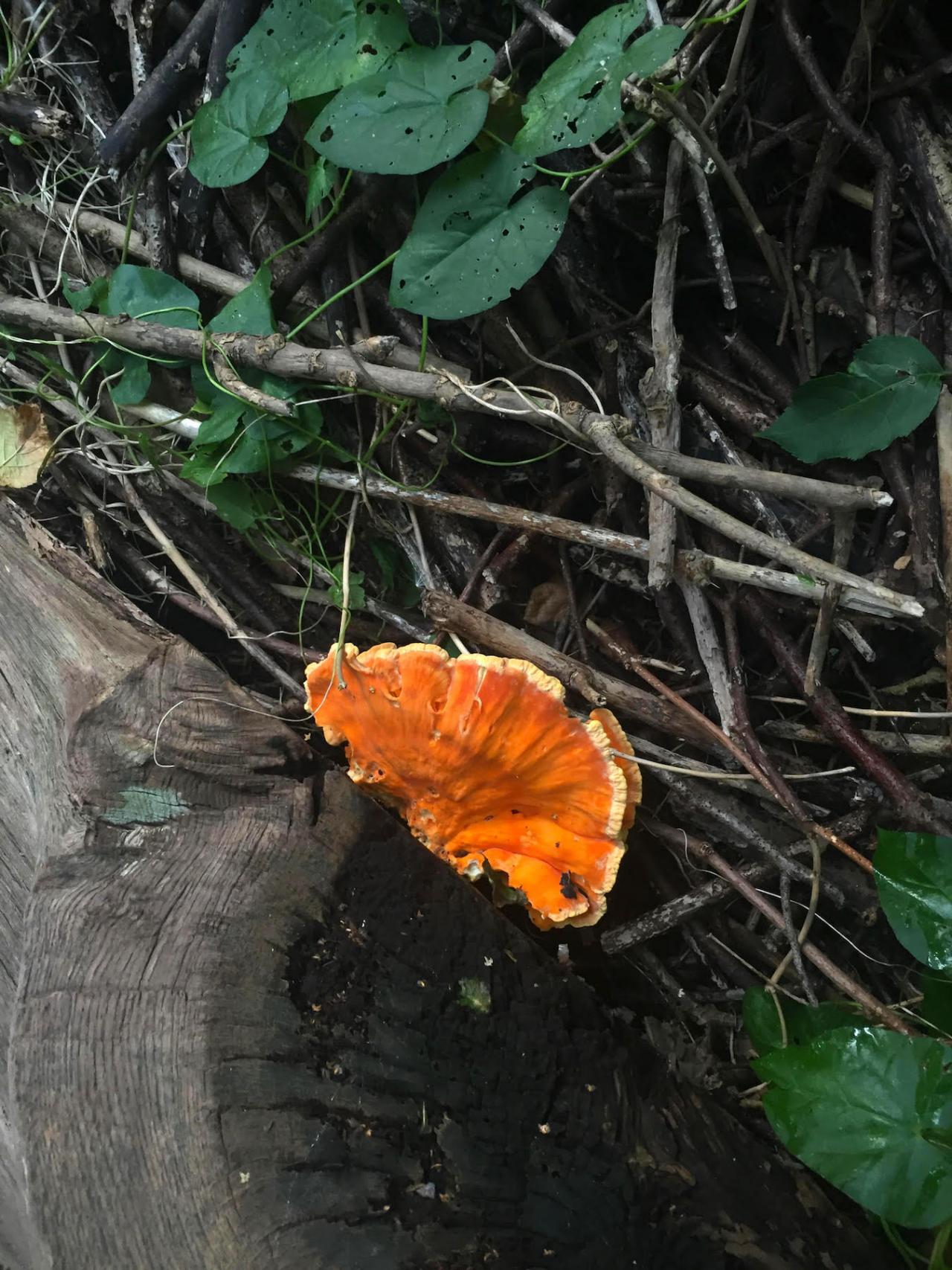 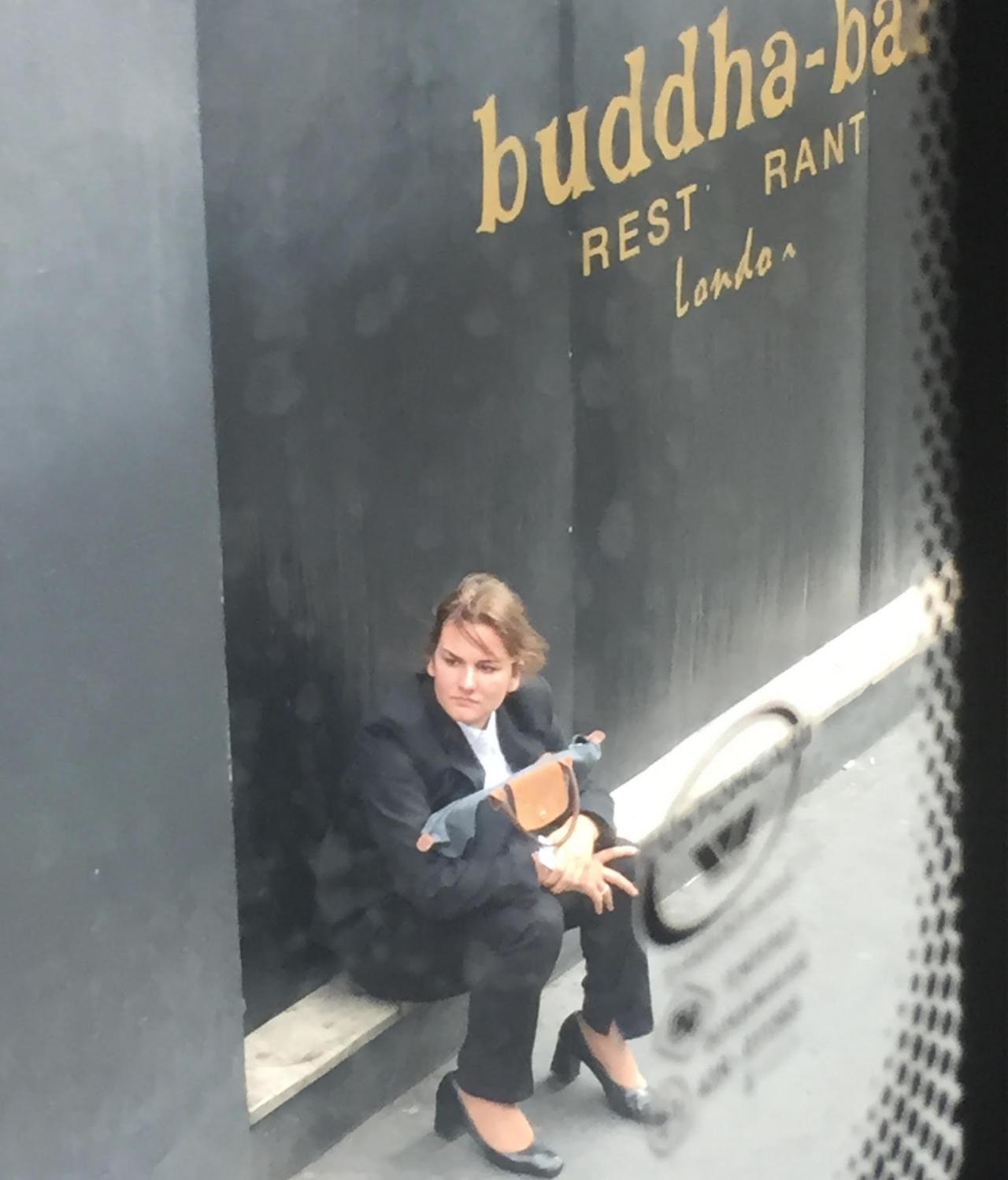 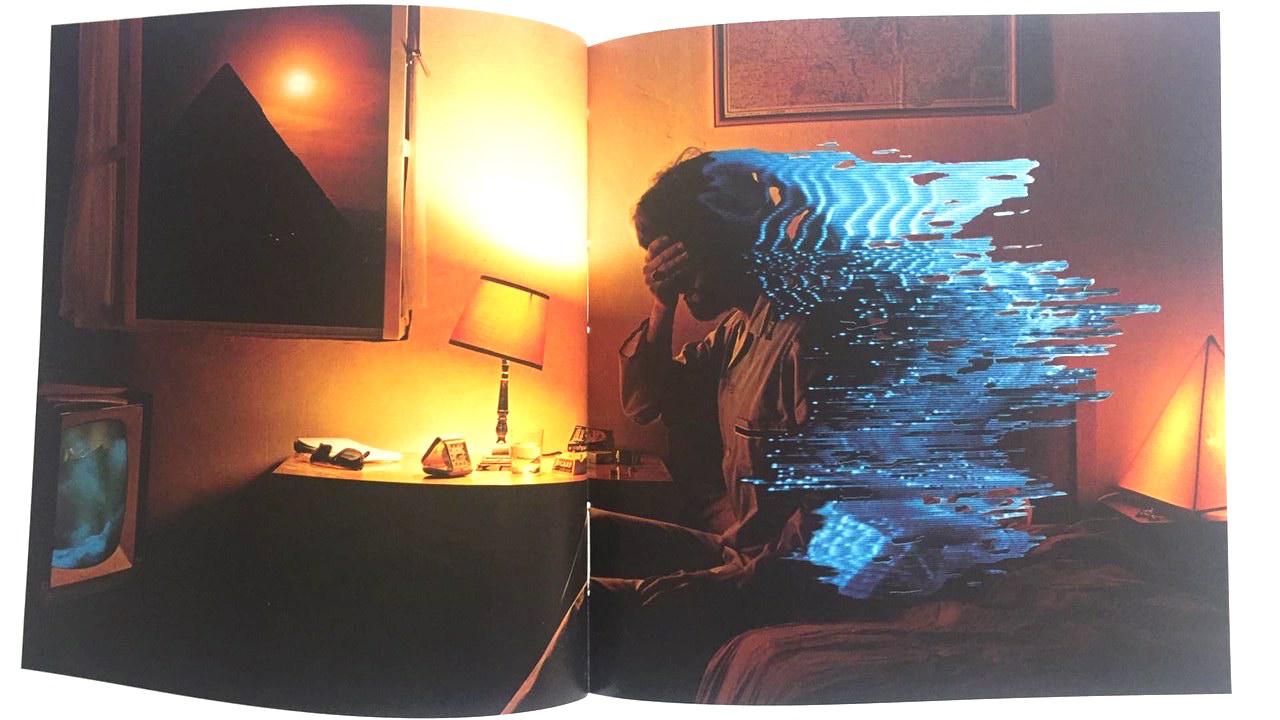 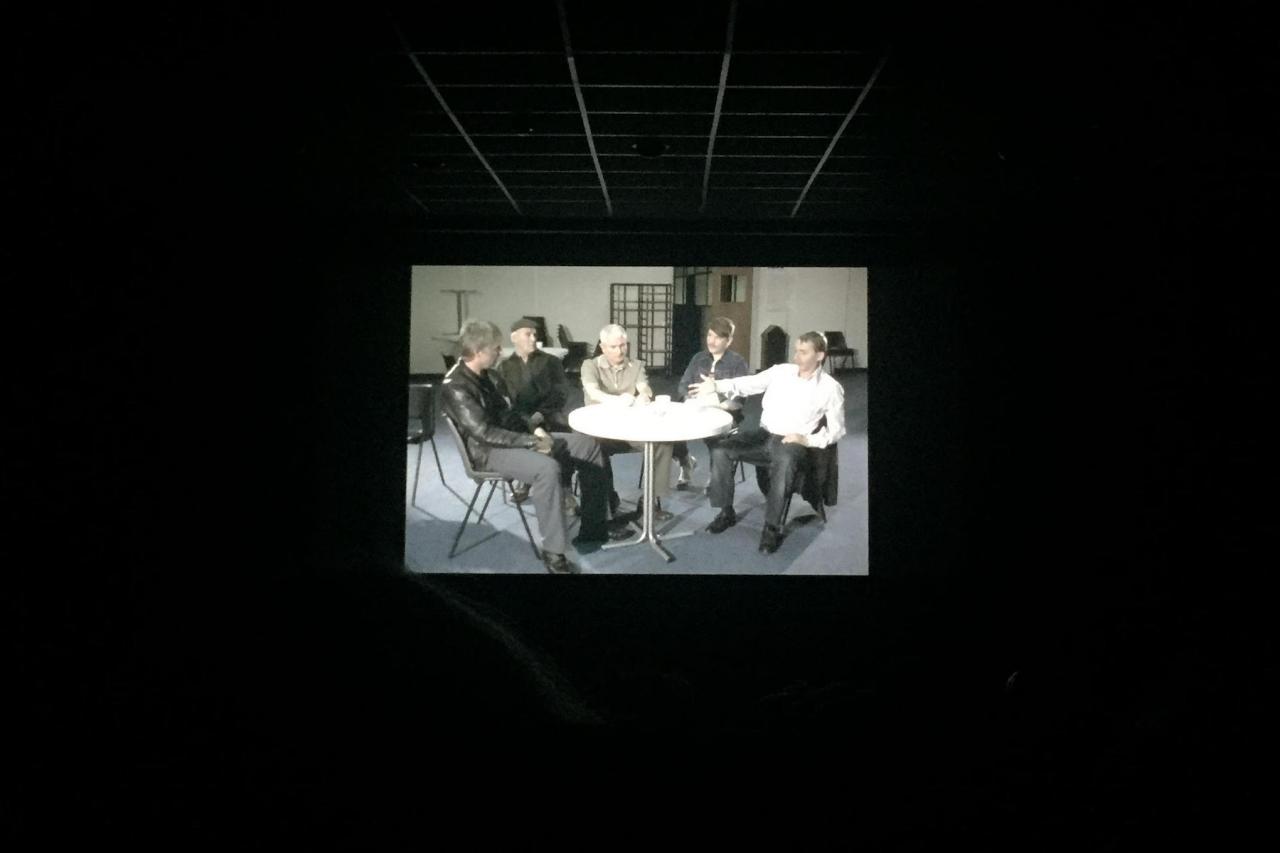 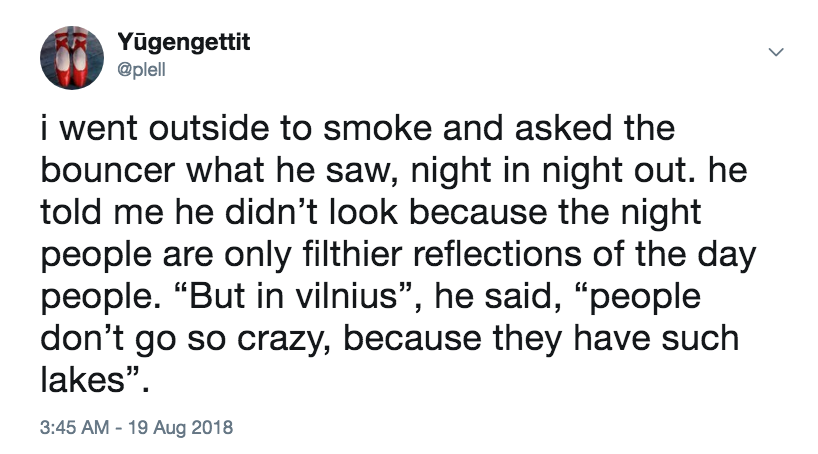 "People are terrible. They can bear anything. Anything! People are hard and brutal. And everyone is disposable. Everyone! That's the lesson." Or is it? Ella Plevin goes night bus top deck Fassbinder for August.

The ends of july

I’m at a foam party at a project space in Catford. The party is meant to be a Mark E Smith tribute party but everyone agrees they hate him and wish the DJ would just play Aqua. Under the foam I shut my eyes and imagine this J Alvarez track I’ve been listening to all month is playing instead. Everyone is having a brilliant time complaining about the toxicity of the foam and the music. Upstairs some gentle soul tells me he slept on a beach in Greece beside friends recently and it was exhausting because the sea was too loud.

Outside the bus stop a car hurls with a man’s torso spawning from one window into another.  His legs are in the back but his arms must be drunkenly clutching the front passenger seat and he looks like some flesh and pique knit mix fungus bubbling forth from the vehicle, jubilant shouts thrown out behind him like spores. The car slides by and he’s gone but it was a beautiful sight, all two long seconds of it.

The top deck whirls around the endless Icelands, McDonald's, Poundlands, Paddy Powers. I have a vision that the capital is still a forest, the terminal high street as copse of trees. Shops alike but not the same, and just as one oak among many has colonies of so many beetles or ants or some same florid purling lichen at any one time, the public flora and fauna scuttle and fan in and out of different branches of the same franchises all over the city. Lives alike but different.

A strident friend retweets something about capitalism that makes me tired because it doesn’t help. People say it is the problem (and it is) but avoid accountability, too. We could stop it all tomorrow if we all agreed to but we won’t and "we" never will and that’s the problem too. People, us. Shopkeepers at war. I switch tracks and wrench myself off Twitter and back to dark windows.

A sparkling LED Aladdin’s cave sign glides by near the shared house of friends I invited out but didn’t come. "Not my thing" said one who would have enjoyed it. "In Catford lol" said another, and finally, "Are you gonna get a tongue piercing next?". "Owch" is scrawled across a hoarding opposite the Aylesham Centre. Poundland, Specsavers, Subway and The Drovers. Redemption House.

On the final Northern Line leg of my odyssey home half the carriage dozes and I think about how strange and wonderful it is that this is my job and this is my life and feel disturbed by the strength of this 3am solitudehappiness. I can’t believe I'm getting away with it. And then I think about the girl who stopped talking to me and started telling strangers I’m dark-hearted and not capable of empathy and feel sad for her because I know she doesn’t know the secret truths I know too well and sad for me too because I have needed so badly to forget all the things she wanted me to be in order to learn them. One of these secret truths, by the way, is that when people make violent accusations it is an indication of things they dislike about themselves. I try to keep this in mind always.

But I didn’t forget. Not entirely. I still have those days that fizz with untamed sentiment. I’ve just totally learned to channel better, I think while walking home from Archway station. And then August hits.

I wish I could write about emotions like Natasha. Elegantly, lightly – held at bay. Without such a strong sense of Romantic Doom. But in August they eat me.

I keep trying to write new fiction and it all comes up as a terror-vision. I need to temper this before it goes out into a world I increasingly see as cut with unspeakable divinity.

As newspaper front pages scream about a world on fire I have my own megalomaniacal dazzling Shine to bear (I’m saying I was happy) and cooking up a terrible crush to put it in – the sum of which takes place entirely inside my head – seems rational now. But it made me act strange and say things I don’t believe, some quite ugly. And after seeing no indication of its return I endure a few days of wounded pride (read searing pain) then let it slip sadly back into the phantom ether P is so afraid of.

It doesn’t help that I’ve been spending so much time with other writers. We all love melodrama, even minimalists have an anatomists respect for devastating affect. One conversation in particular sticks through the month, one which starts physically in a Frith Street crypt and ends up in the garden at Trisha’s (as all good weeknights will) while wandering figuratively between the invisible hands of the dead and a giant mindcloud jealously hoarding all of human consciousness in raw data just beyond earth’s atmosphere – but there is so much of it in existence that it leaks and dribbles ideas incontinently into our minds and out again. The mindcloud is P’s eldritch dread, not mine. But I start to think about it as a great (silent) hum. I listen.

So many other things happened through July and August that a surfeit of feeling is the least of them even when it was the most and I Troxler on. One of those leaving an impression was a screening organized by Chisenhale’s new research programme: I sat in the dark of the Genesis and got knocked sideways by Duncan Campbell's Make It New John (2009). The film is about the DeLorean as 80s icon belying the myth of aspirant ‘Murican mobility. The company was supported financially by the British government in order to secure a manufacturing contract in a then impoverished Belfast, but the car from the future was always just a dream and the money bled out into a spiral of financial scandals.

The scene that haunts me concerns four or five union guys from the Dunmurry factory seated around a table being interviewed by a reporter. The impassioned way they speak about their shattered livelihoods before descending into amusing pedantry (as any community tends to, not just unionist heroes) is enough to stir fire but there’s a heartbreakingly intimate moment when all but one of them leave the room which comes out of nowhere and stabs me in the back. The interviewer presses the man, who has been silent throughout the earlier conversation:

“What does your wife think?”
“I don’t have a wife”
He pauses and looks into the distance. She leaves the silence open until eventually –
“I had a girl once. Affie. But that was a long time ago”
“Do you mind me asking what happened to her?”
“Nothing happened to her. She changed her name.”
“Did she...”
“I went to kiss her. I still had the cigarette in my mouth. I’d had a bit to drink. That was that.”
He pauses again. Shifting in his seat.
“Where’s Martin?”
He looks around. Visibly uncomfortable.
"Where’s Martin and James?” he repeats.
“Your job must have been very important to you” she says with gentle force.
“My work made me feel less alone” he says quietly.

Then after the film ends some stupid academe victim bitch compares the DeLorean DMC-12’s horny bachelor customer demographic to the incels of today and the car to Jordan Peterson’s promises. She lists John DeLorean’s parade of wives and says that a succession of model-slash-actresses made him look like a careless playboy. As if casting her judgements of these women’s professions onto their collective husband makes it somehow progressive. I want to hurl shit from my bag (an apple core, battery brick, pens) from the back of the cinema and am relieved that I don’t when it turns out she’s a friend of the sweetheart who brought me to the screening in the first place

But still, I think, as she politely ignores me at the pub later, you’re an ungodly chom if you can watch that film and don’t see how men and women’s pain and folly hurt the same. Like the Dunmurry worker I don’t tell my crush I’ve let visions of a future hang in the air around his lovely face but go back to trying to write instead. And it comes out like Carson McCullers driving a hearse into a ravine.

ELLA PLEVIN is a writer, stylist and a contributing editor for Spike based in London. A new installment of her online column "Escape from Prison Island" will be published every last Wednesday of the month. Last time she wrote about about bro theorist philosopher kings and the end of the future.