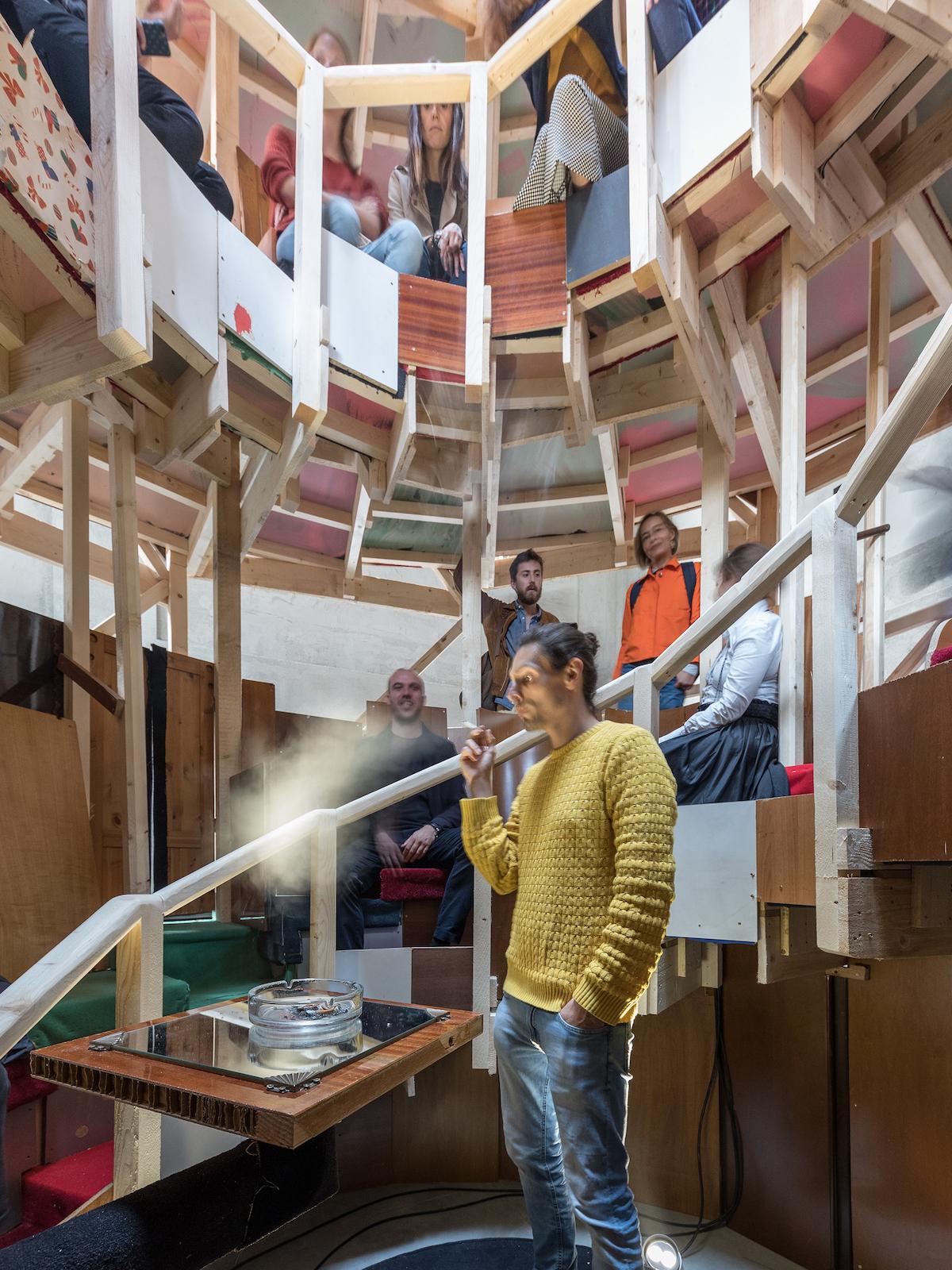 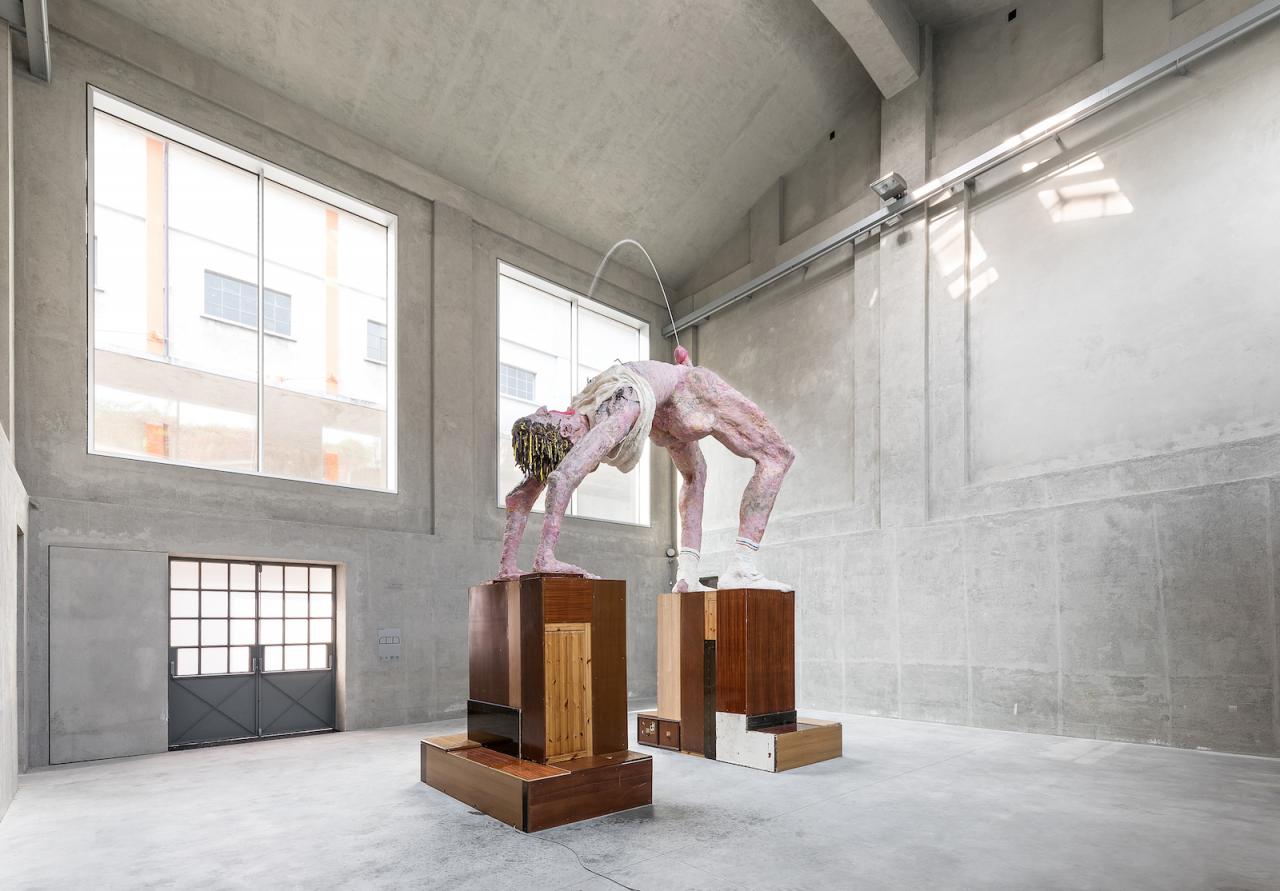 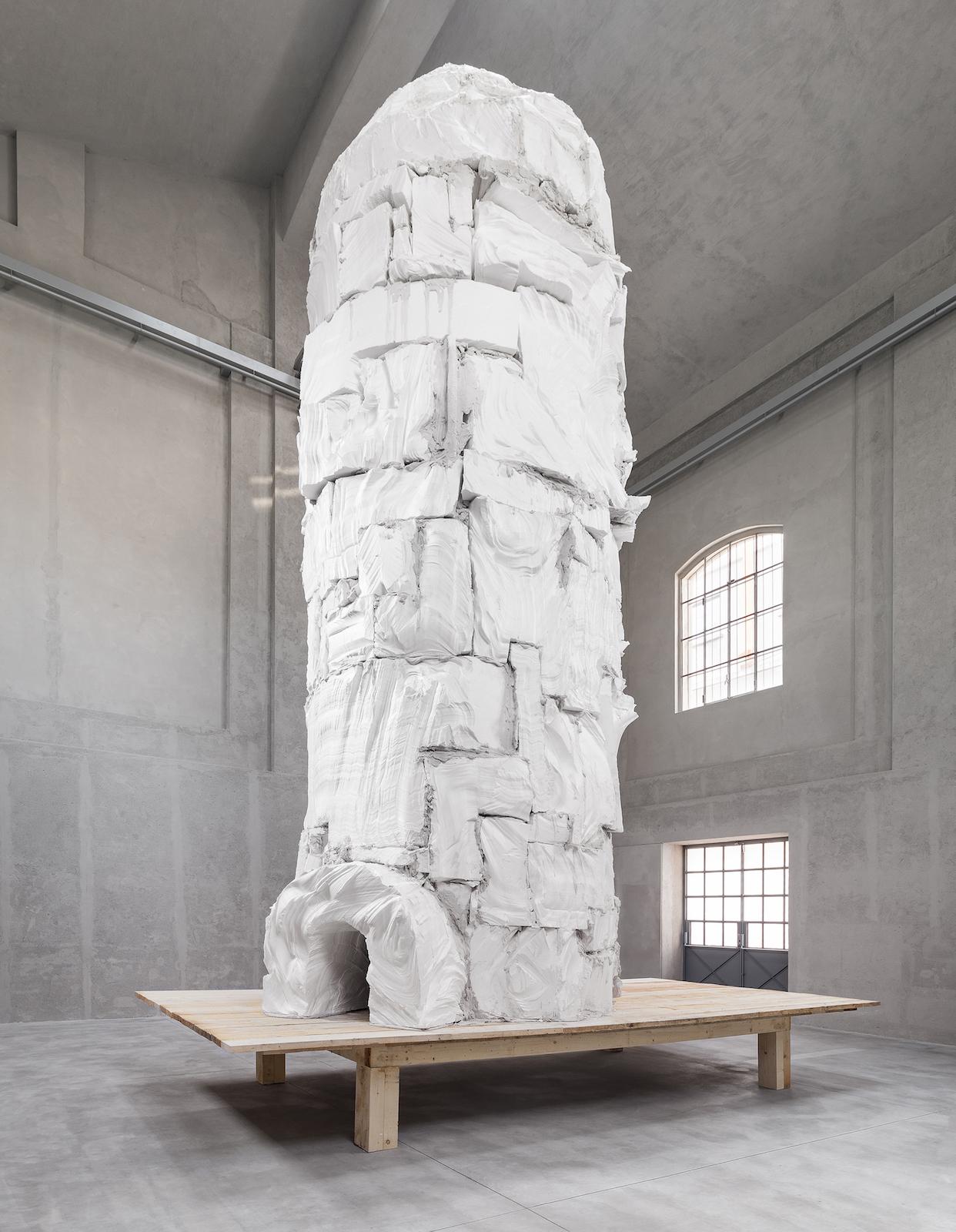 You walk into this show and you’re at the feet of Gelitin’s Arc de Triomphe (2003/17): a colossal naked man made from plasticine, who is bending over backwards and pissing water into his mouth from a visibly erect penis. Halfway between a carnival float and a fountain, the work was originally created for the Salzburg Festival in 2003, but it was immediately destroyed when the local mayor realised that Prince Charles would have to pass under the irreverent sculpture to start his offcial visit to the event. That’s a satisfying story.

The architecture created by OMA for the Fondazione Prada is regal – facades clad in gold leaf, imposing post-industrial volumes, mirrored surfaces, empty esplanades – and Gelitin seem to take the piss (pun intended) out of its macho monumentality. At the same time, Arc de Triomphe is an ironic self-portrait of the artist as court jester: after meeting as kids at a summer camp in 1978, the core members of the Viennese group (Wolfgang Gantner, Ali Janka, Florian Reither and Tobias Urban) never stopped playing both together and with a motley crew of collaborators, performing the enfants terribles of the global art system in the name of Dionysiac free expression, gender-bending, Dada humour and collective fun.

In this case, they were invited to take part in “Slight Agitation”, a cycle of four solo presentations in the Prada Foundation’s Cisterna (Tank). Gelitin’s exhibition engages with the foundation’s architecture also in its structure: responding to the three spaces making up the Cisterna, the artists present three vertical works, whose phallic symbolism is as patent as it is comical. Besides Arc de Triomphe, there is Iglu (2017), a massive tall and narrow, Lingam-like tower of white styrofoam blocks on a wooden platform to stand as an elongated obelisk; and Fumame (pronounced like fùmami in Italian, i.e., smoke me, 2017), a staircase in wood and found furniture and red carpeting that spirals upwards over several storeys.

It works as a DIY theatre for vision and voyeurism: looking down into the centre of the staircase, the public sees a small table, with ashtray, cigarettes and lighter, where viewers are not only invited but encouraged to have a puff in what the artists call an “individual performance”. The visitors’ complicity and participation allows them to break the ban on smoking in institutional/corporate/public indoor spaces and reverses the public shaming associated with the consumption of smokable plants. But Fumame is also a joke about our surveillance devices, where behaviour can be openly scrutinised, “liked” or judged by others – a permanently self-inflicted panopticon that recognises no borders between private and public.

A monument might seem a good way to dramatise such issues. And yet moving from a public square to the private, sheltered spaces of an art foundation changes the purpose as well as the scope of monuments – or anti-monuments, as the show’s co-curator Dieter Roelstraete defined Gelitin’s works. So, no scandal here, just a slight agitation.

– This text appears in Spike Art Quarterly #54 and is available for purchase at our online shop, There's a few last Artist's editions by Gelitin to be found here –