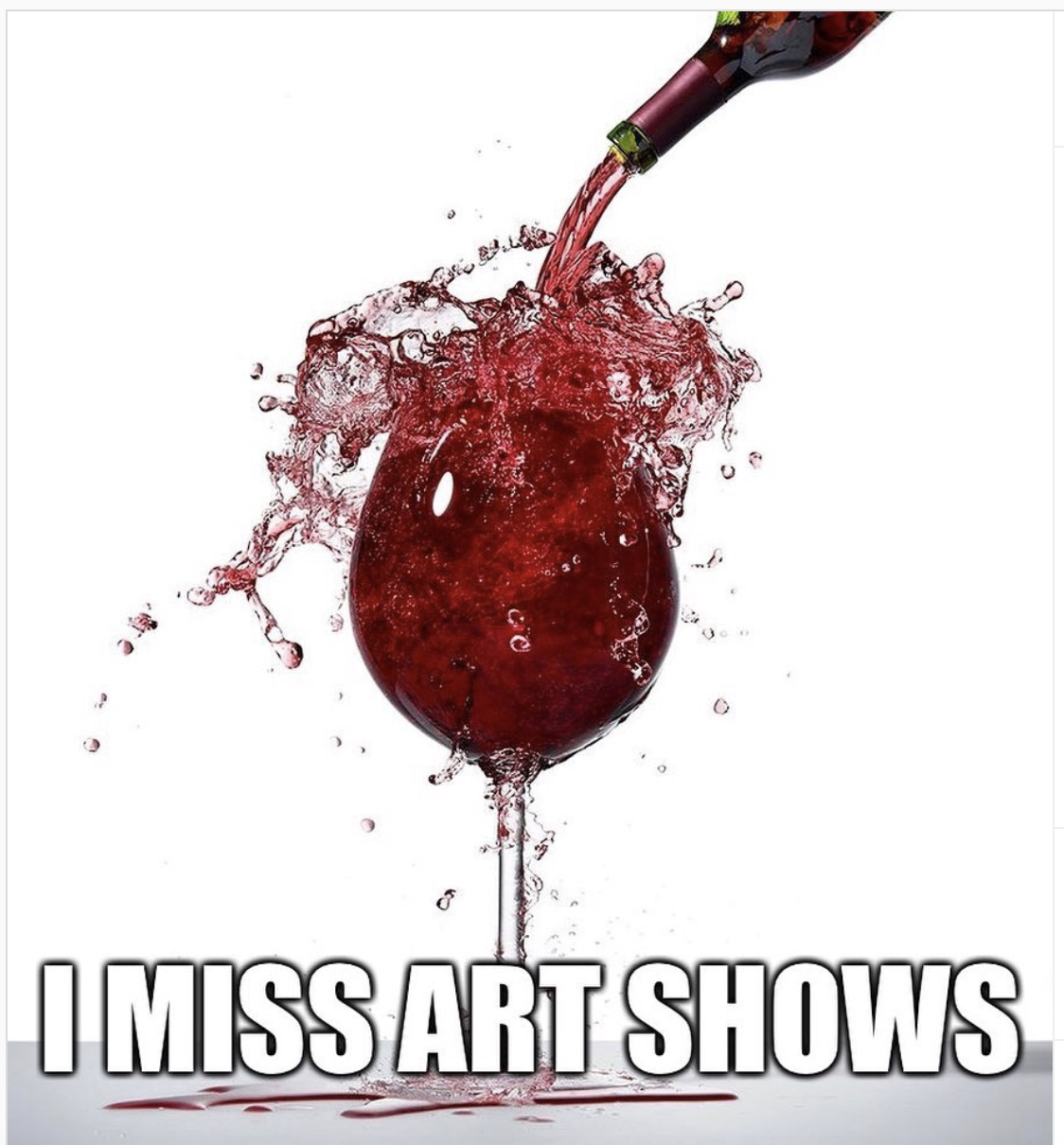 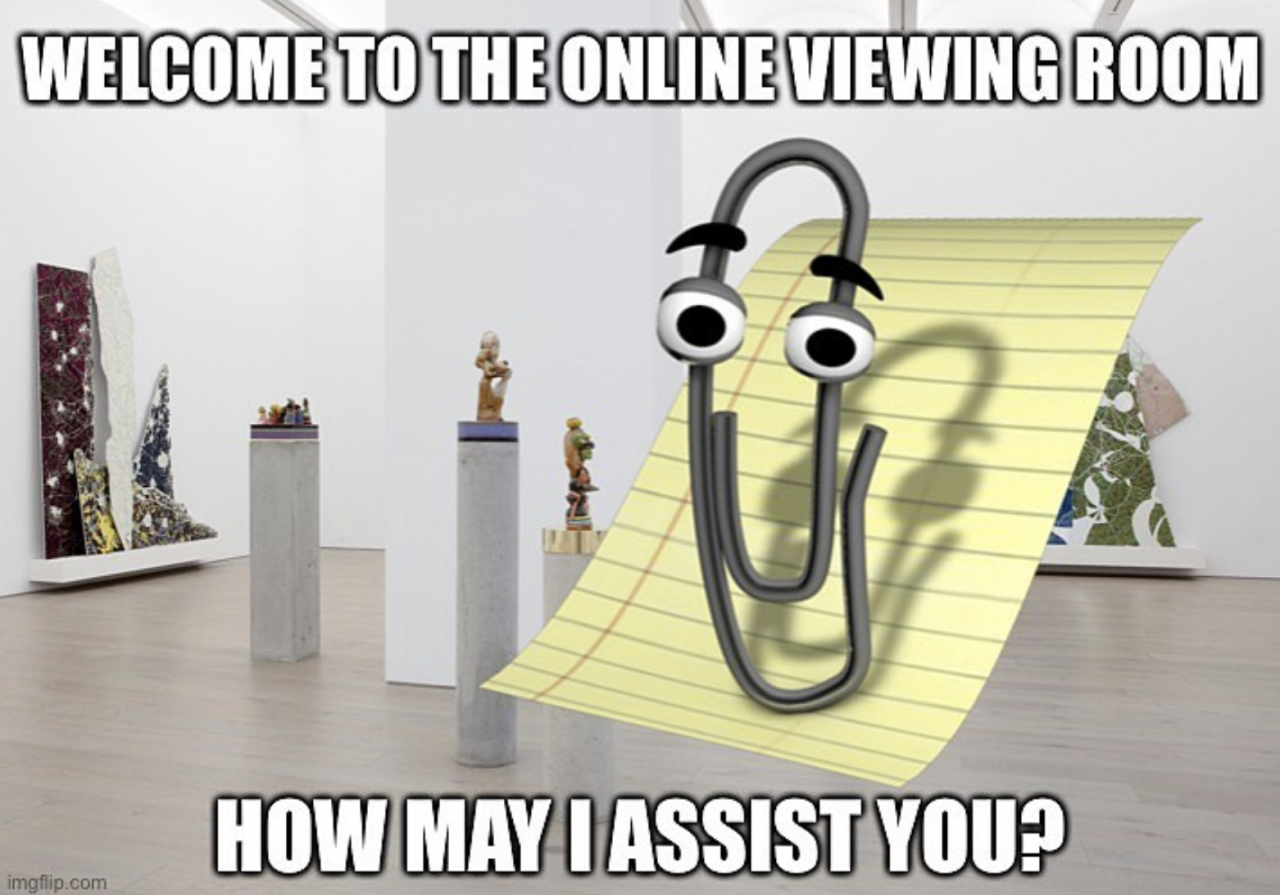 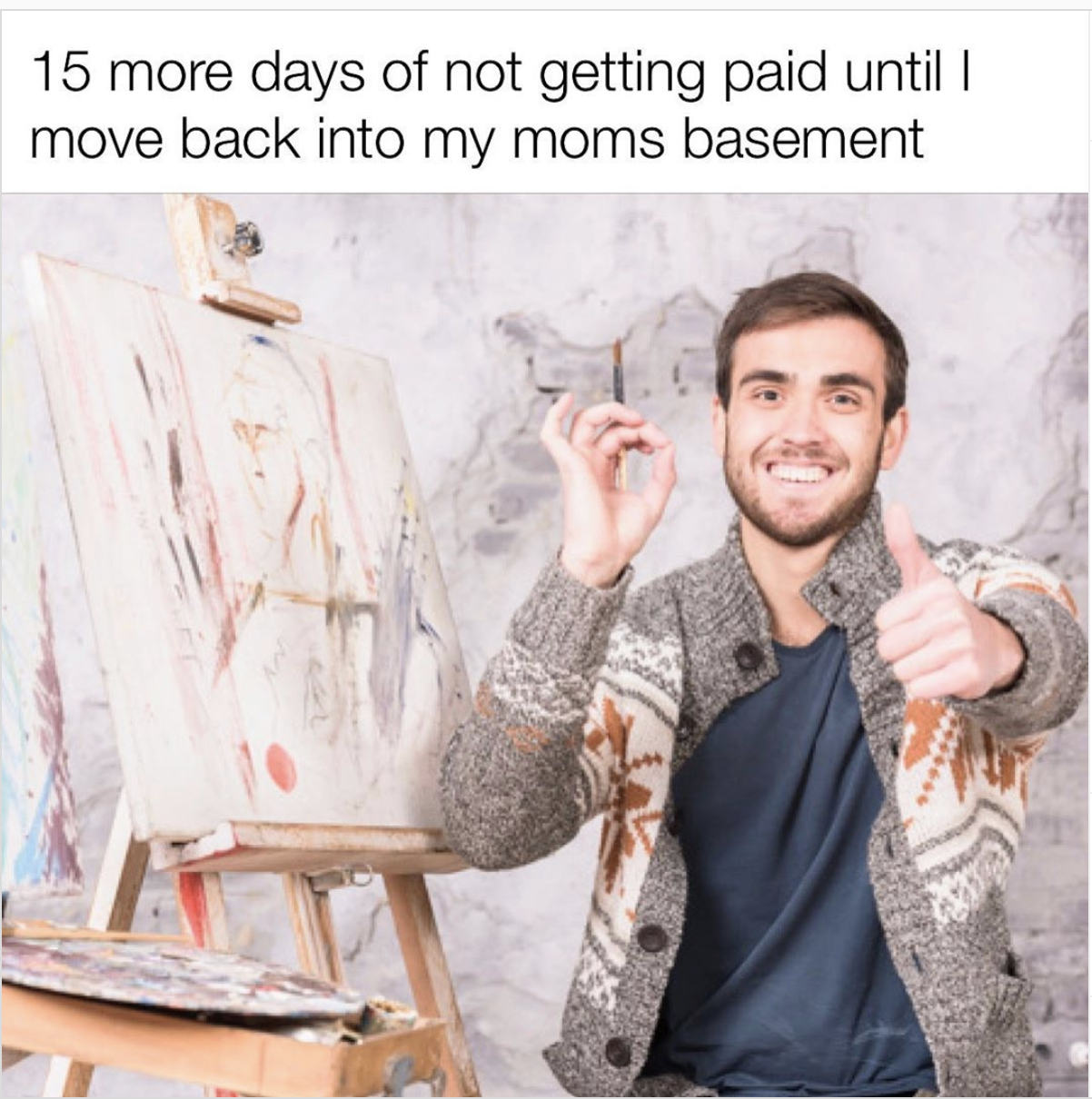 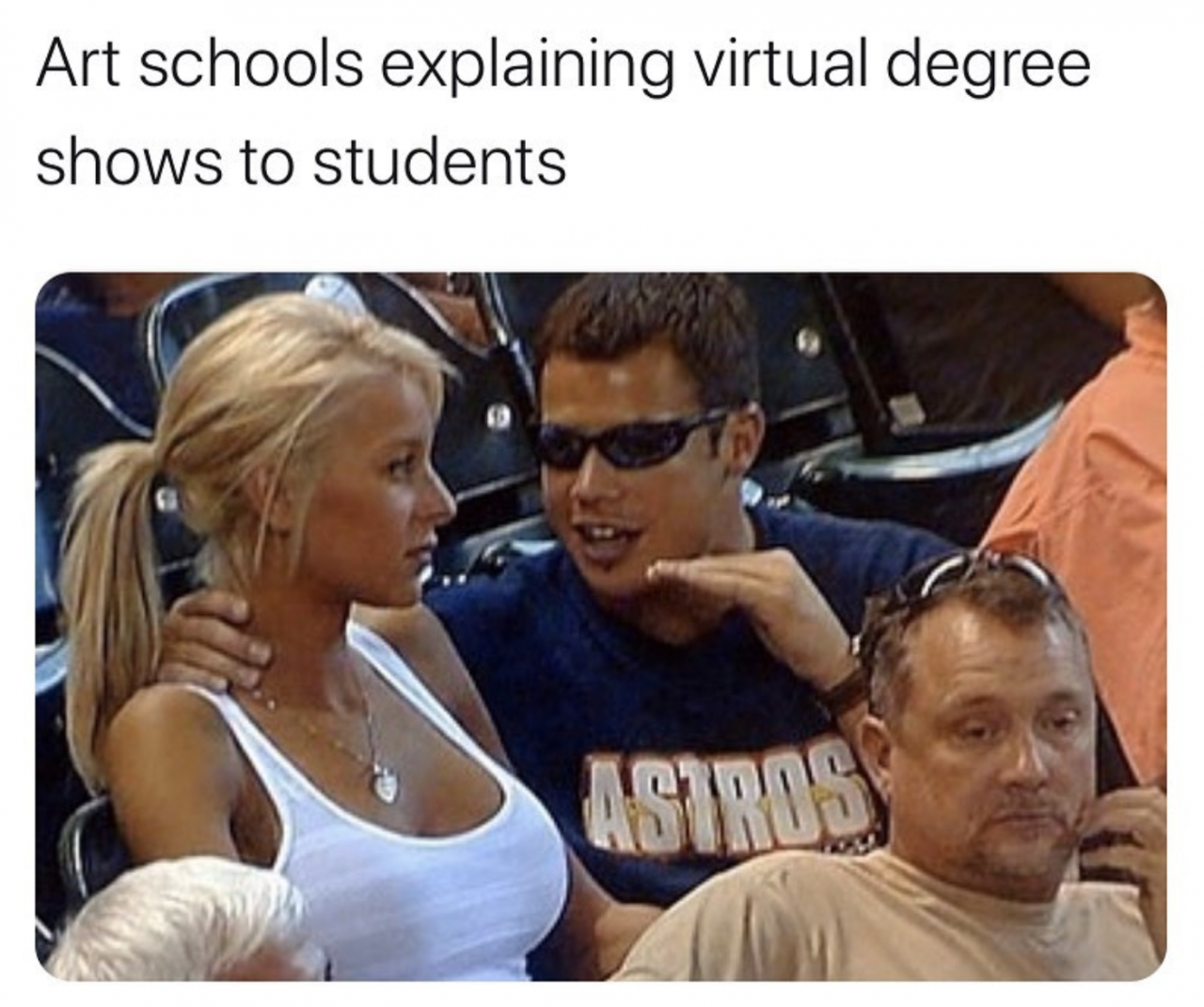 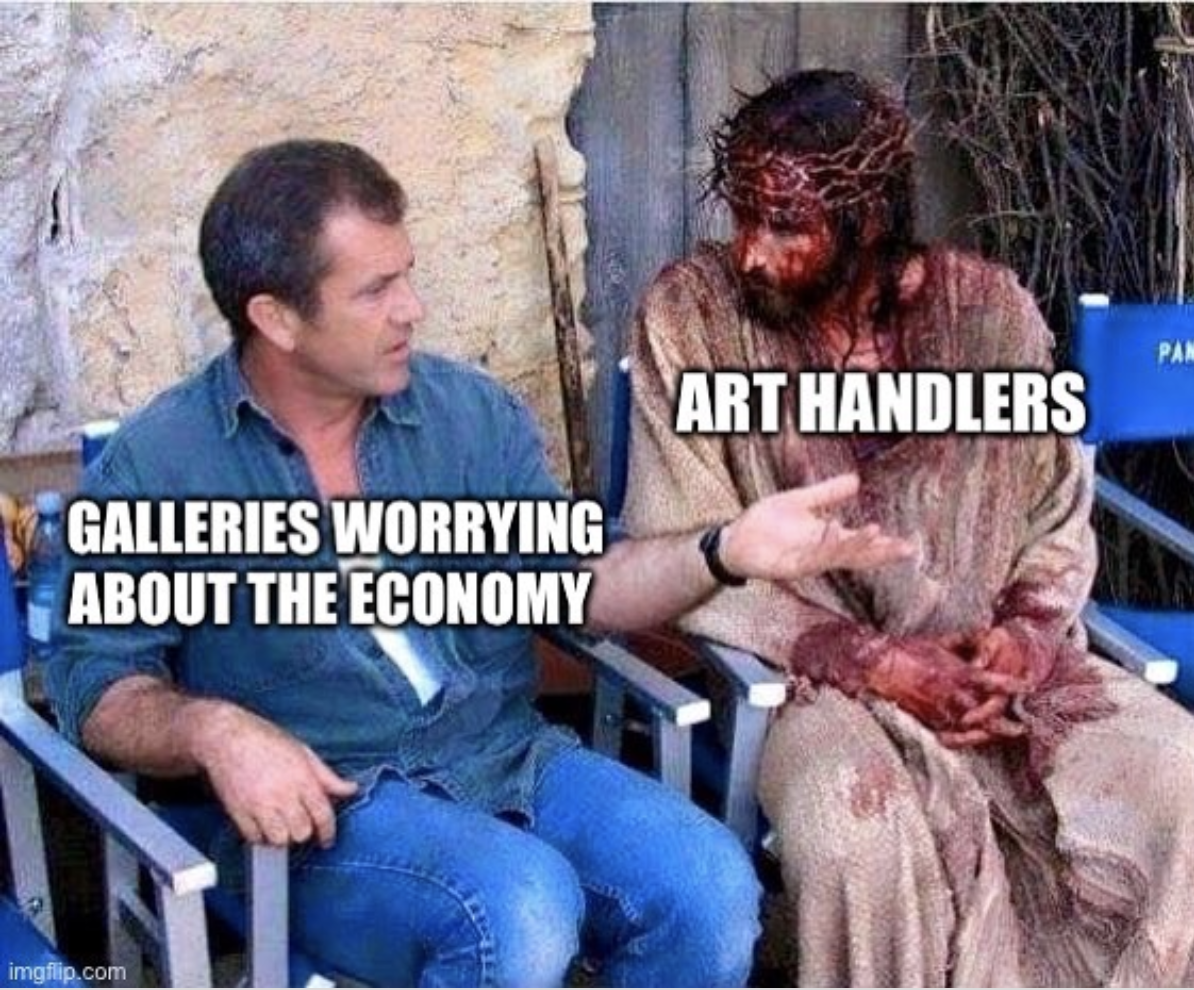 While the global outbreak of COVID19 has left museums, galleries, and art schools around the world deserted, the internet is bustling with activity. In Italy, web usage has increased by close to 40% since January; since the first COVID19-related death in the US in late February, traffic on Facebook has risen 24%, Netflix 16%. As practically everyone is quarantined at home with their digital devices, Instagram, Youtube, and Facebook have seen an influx of COVID-related memes and content offering tongue-in-cheek commentary, distraction, and momentary emotional relief. Such content – often addressing solitude, “skin hunger”, and the at times awkward navigation of communication technologies, – speak brilliantly to the bizarre experience of a total physical lock-down in a highly virtual, and digitally-connected world. Even the global health crisis’ popular slogan #TogetherApart (which has been adopted and translated into a wealth of languages and local contexts) hints at the material paradoxes of togetherness in a digital era, where technology is effectively the interface of sociality, and a pandemic shines a light on infrastructures already in place.

As we’ve moved our relationships, exercise routines, and birthday parties to Zoom conference calls, the art world, too, has been forced to dip its toes into virtual space with a new kind of urgency. Like in many other sectors of society, in the past weeks we’ve seen the coming of a kind of “emergency virtuality” from institutions, galleries, magazines, and artists themselves, to make up for cancelled exhibitions and events, and to combat the anxious boredom many are facing at home. Art fairs have launched “virtual viewing rooms;” film festivals are moving online, suddenly streamable from home; museums offer e-exhibitions. “virtual walk-throughs”, “webinars”, and screening series; academic journals are opening their pay-walled archives; and galleries and magazines are launching podcasts and commissioning artists to compile playlists with their favourite YouTube videos and Spotify tracks.

COVID19 offers a surprising forced return to the question of digital distribution in a time when the art world has largely turned away from it, preoccupied, as it is, with the politics of more traditional notions of social, political, and institutional presence in physical space. But as media theorist Gene Youngblood once argued, space, too, must be understood as a relation – “as producing a transfer, a connection, a set of interrelationships among often conflicting elements; it is closer, one might say, to the postal in the sense of a permanent, distributive production of social structures than to a closed box”. Epidemics, wars, and other international crises have in the past proven the value of distributive communication technologies, be it through letters, radio, TV, chat-rooms, or TikTok; all are interfaces, windows into social space-making – and, for that matter, artistic and political, too. Not unlike our public institutions, “virtual spaces” offer an imaginary locus of civic interaction and exchange created by communal agreement, at pains to disturb distinctions such as inside/outside, distance and physical embodiment, with a potentially liberating effect for cultural producers and audiences alike.

In all its atrocity, the crisis not only offers a testament to how important and valued social intimacy is to the cultural sector, but also offers a clear overview of the status and potential of contemporary relational technologies in the arts. Since post-Internet, the web may have been corporatised, flattened, and “gentrified”, but it has also rapidly advanced in terms of media distribution, all of which calls for new critical interventions, new politics, new forms of protest (such as the newly-founded @climatelockdown and the Hong Kong protest’s move to the video game Animal Crossing). If we let it, the crisis draws the possible outline of an art that’s fully distributable, accessible, democratic, even, not unlike much early net.art, whose friendly ghost haunts the current frantic virtualisation, as the culture industry braces itself for a season (or more) of cancelled or postponed events.

Because, of course, events are exactly what prevents us from permanently embracing the digital, from “going postal”: what else could pay the bills? The event, it’s become clear in recent weeks, is the basic unit of contemporary cultural production, and the de-facto livelihood for most culture workers, from artists to catering staff. A string of memes coming out of popular art world accounts such as @artreviewpower100 and @jerrygogosian in recent weeks have eloquently highlighted this fact, speaking to the deep aesthetic and economic precarity (and thus, silliness) of online art initiatives, however laudable they may be.

For while the technologies may already be available to produce a mainstream digital art world, the contemporary economy of art relies far more on presence – physical presence, attendance, being-there in person – than on traditional ideas of the labour power tied to producing objects. Presence, according to Hito Steyerl some years ago, “invokes the promise of unmediated communication, the glow of uninhibited existence, a seemingly unalienated experience and authentic encounter between humans. It implies that not only the artist but everyone else is present too, whatever that means and whatever it is good for”. The art world’s economy of presence goes beyond experiencing exhibitions physically (most art is sold via PDF anyway),  and ultimately comes down to a working method that is deeply social: the opening, the dinner, the fair, the conference, the party. Presence in the art world doesn’t only mean community and togetherness; it means visitor numbers, sales, fundraising, networking, gig-working (performers, guards, guides, bartenders), and ultimately, employment.

In a very short time, the COVID crisis has thus also reminded us of the extreme fragility of the contemporary art world, virtual or not, and how any crisis can be used as an excuse by those in power to cut corners and take advantage of those in the most precarious positions.

Almost daily, new virtual relief funds for culture, entertainment, and service workers are set up, in a brave but futile attempt to remedy a sudden and total loss of income and other professional “opportunities”. In London, the Royal College of Art’s rushed decision to replace all physical thesis shows with online exhibitions sparked protests from students, who were not consulted or even properly notified of the change of their £29,000-a-year programs (their online petition, currently at 8,000 signatures, simply argues: “an art or design degree without a physical degree show is not an art and design degree”) How can the loss of professional exposure at a physical thesis show be calculated in economic and social terms? In the US, sweeping layoffs have already been announced by museums, beginning, of course, with the freelancers and the non-unionised. Meanwhile, on Instagram, those same museums are releasing COVID-related motivational video content and printable home-kits by artists to keep former museum-goers entertained and creatively stimulated during lockdown.

Still, such consequences, which may eventually prove more devastating than the virus itself, should not let us shy away from digital relational technologies in and of themselves; or, from the belief in a more equally distributed, more media accessible art world. Technological infrastructures are also social, economic, and political infrastructures, and it’s our responsibility to think them as one, to use them, and to occupy them. For really, what is the relevance of virtuality without solidarity?

Jeppe Ugelvig is a writer and curator currently in quarantine in West Denmark. He is the author of Fashion Work: 25 Years of Art in Fashion.